What are the Sennheiser Momentum In-Ear?

These Sennheisers are the first in-ear model to join the Momentum series, which has helped to establish the company as a top choice for people after stylish headphones with better sound quality than Beats.

The excellent bottom-end and sub-bass response that makes the full-size Sennheiser Momentum headphones so thrilling is back with a vengeance here, providing plenty of excitement. They’re crackers for electronic tracks, and have plenty of treble presence, too.

While there are some cheaper models that get quite close to the performance of the Momentum In-Ear, and we’re not in true high-end territory here, these earphones will please an awful lot of ears. Particularly those who enjoy bass thrills.

Most of Sennheiser’s in-ear headphones tend to look a little ordinary. But like the larger Momentums, the Sennheiser Momentum In-Ear are different, and embrace colour. The main parts of their bodies are red, but it’s a dark and subtly metallic shade that’s far removed from the bright red used commonly in sports earphones.

That said, the two-tone red-black cable is on the brighter side.

The earpiece bodies are plastic, with a little plate of metal on the back where the Sennheiser logo sits. Take the ear tips off and you’ll see what Sennheiser calls the stainless steel sound tunnel. While the outer part of the earphones is plastic, the inner is metal. 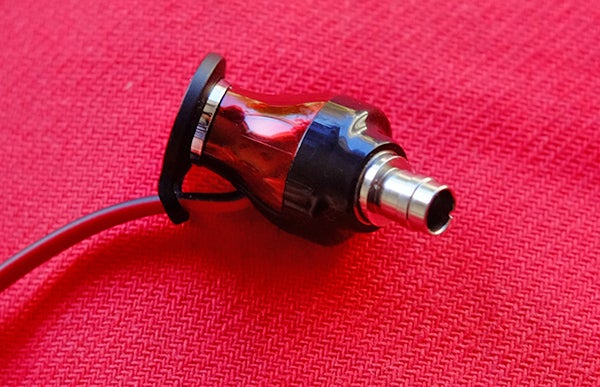 Use of metal in earphones seems to be on the increase, but there’s nothing strictly wrong with good old plastic – it’s what the £300-plus Shure SE535 are made of, after all.

With a sort of sloped design that meets your ear at a slight angle, we did find that the Sennheiser Momentum In-Ear tend to fall out of your ears if you’re not pretty careful about the tips you use. There’s a good variance of sizes on offer, though, from large to absolutely tiny ones.

The Momentum In-Ear appear to have a slightly narrower aperture than some other classic Sennheiser pairs, too, so may be worth closer inspection if you’ve considered your ear canals too narrow for Sennheiser in-ears previously.

A plastic-metal joint construction helps ensure they’re fairly light, with no comfort issues beyond needing to use the right tips. 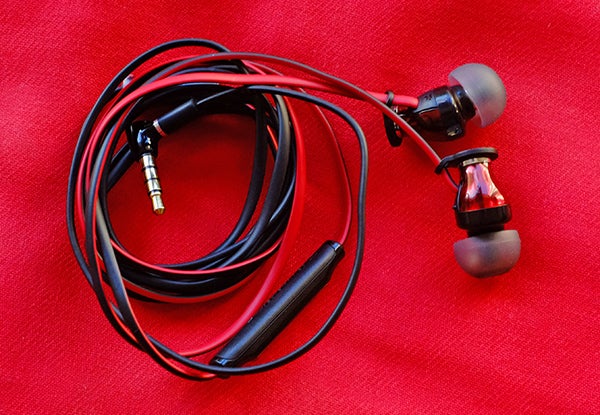 The Sennheiser Momentum In-Ear come in two different versions. There’s an ‘i’ edition designed for iPhones and a ‘g’ version for Android phones. They all have three-button remotes, but as the different kinds of phone respond to different signals, the internal design of the remotes is different.

If you see a pair of headphones with a three-button remote, it’ll almost certainly be one made to work with iPhones, not Androids. Only a handful of sets offer inline remotes made specifically for Androids, so it’s good to see such a heavyweight put the extra effort in. 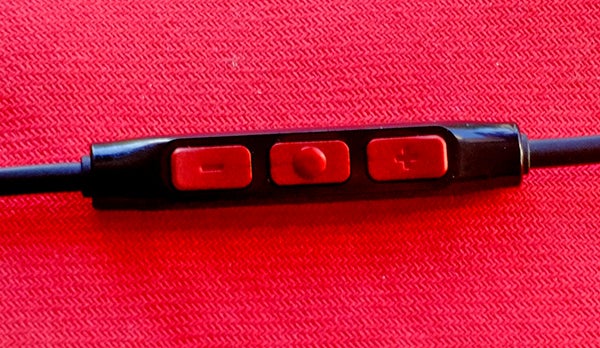 While Sennheiser only advertises compatibility with a few Android brands, it should work perfectly with the majority of Android phones – we tested it predominantly with the Hisense Sero 5, which we can pretty much guarantee was not even in the very back of the Sennheiser engineers’ minds during testing. It works fine with that phone.

Functionality-wise, it’s business as usual. You can control music playback and calls. Just make sure you buy the right version for your phone, as the Momentum In-Ear cable is non-removable.

There aren’t many peripheral extras included, no airplane adapter or 6.3mm adapter, but you do get a carry case. 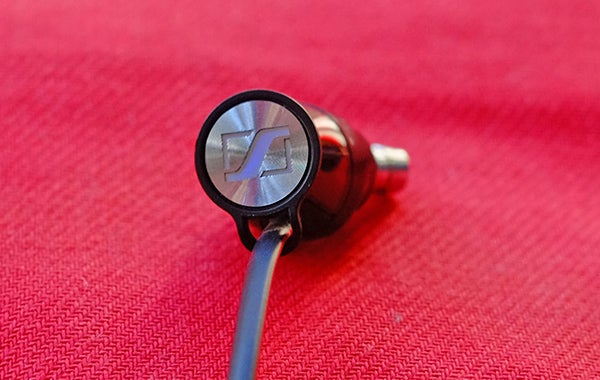 Unlike some other in-ear variants of respected full-size headphones, the Sennheiser Momentum In-Ear do a very good job of recreating the main sound characteristics we appreciated in the larger Sennheiser Momentums. To sum it up in four words: they are very fun.

They provide excellent bass with the sort of depth and impact you simply might not expect of an in-ear headphone. The impression of bass depth is tremendous, and when coupled with a lively treble it provides excellent dynamic range that makes music sound vital and energetic.

Despite being very powerful, the bass is very well controlled, avoiding any bleed into the higher frequency areas. It seems Sennheiser has managed this while using just a single dynamic driver for each ear. There’s no excess of mid-bass at all. As such, while bassy, they don’t have the character of your average ‘bassy earphone’. 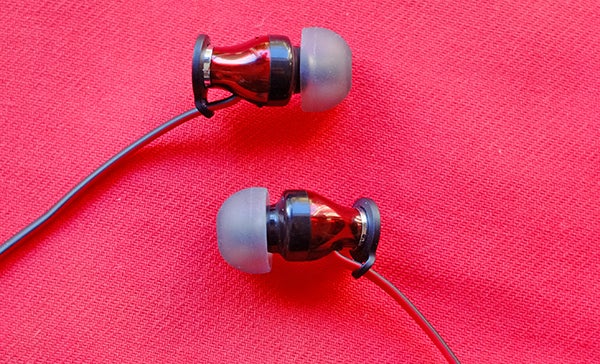 We’ve heard some criticism of the Sennheiser Momentum In-Ear’s treble from other reviewers, who say that it can be somewhat harsh and overly bright, but we don’t agree. The treble is strong but not excessively prone to sibilance or harshness. This could be down to slight tuning differences in the US version of these earphones, but the usual differing of opinions seems more likely. Certainly, they’re less prone to harshness than either the £250 Atomic Floyd SuperDarts Titanium or Nocs NS500, both reviewed this year.

The clarity of imaging and soundstage sophistication of the Sennheiser Momentum In-Ear are also impressive, aiding the natural separation between bass and treble-focsed instruments.

As is fairly common for an earphone set with dual emphasis on the bass and treble, the mid-range is a little timid, and it’s one part of the Momentum In-Ear that could be improved. While the texture, tone and detail is great, providing vocals with a very natural timbre, the presentation of the mid-range is perhaps a little too recessed.

A finely honed but somewhat ‘background’ mid-range means the Sennheiser Momentum In-Ear don’t have anywhere near as much power in the mid-range as in the lower registers.

Listening to the Sennheiser Momentum In-Ear next to the top-end Sennheiser IE8i, a mid-range disparity is the clearest difference. Where the IE8i has very forthright, strong mids, the Momentum In-Ear’s middle range is much softer, giving vocals less authority, as well as making them appear ‘further back’ in the sound stage. 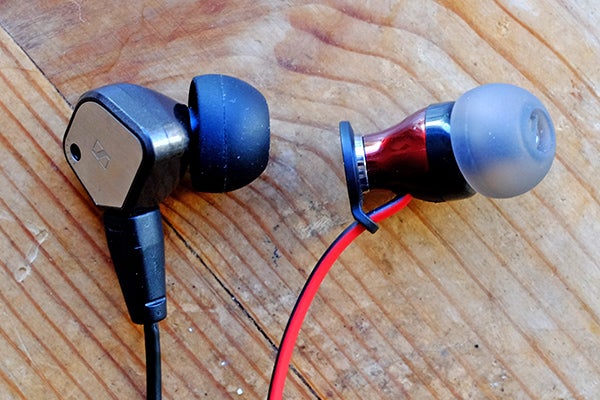 Of course, this comparison is largely made for those interested in how the Momentum In-Ear sound signature differs from what Sennheiser has aimed for in the past. The IE8 cost between £200 and £280, putting them in a completely different league.

The Momentum In-Ear come across as slightly softer-sounding, not in terms of lacking treble clarity but that mid-range impact. It’s not all that dissimilar from the sugary ‘ear candy’ effect we noticed in the B&W C5. As a result, these are not quite true high-end audiophile earphones, but then the £90 doesn’t really position them as such. 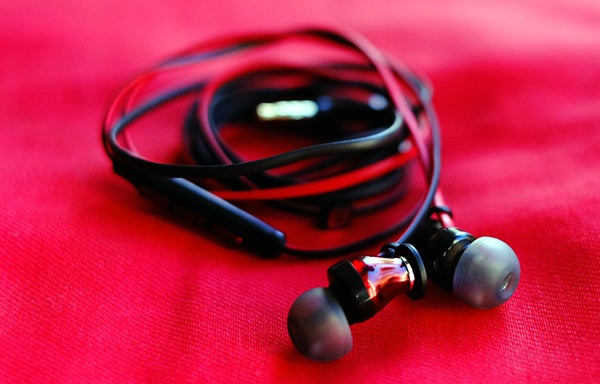 Should I buy the Sennheiser Momentum In-Ear?

The Sennheiser Momentum In-Ear sit quite awkwardly in cost terms. At £90 they’re expensive enough to encourage comparison with higher-end multi-driver earphones, while also being a fair bit more expensive than very competent mid-range sets such as the Nocs NS500.

In-ear headphones simply haven’t been stratified into price bands like on-ear and over-ear headphones, making trusting your ears all the more important.

Thanks to the pretty-but-reticent mid-range, you don’t quite get a traditional high-end sound with the Momentum In-Ear. However, the natural tone of the mid-range and the sheer power of the bottom-end and sub-bass is very impressive, making for a very enjoyable pair of earphones if the price jump to something like the Sennheiser IE8i seems just ridiculous.