With apologies to Shure, the SE535 earphones don’t really need to exist. Frankly, the outgoing model which this upgrade replaces, the SE530 earphones, in turn an update to the E500PTH earphones, which have been with us for nigh four years now, were good enough.


In the technology world, where one month’s time often seems to have produced one decade’s worth of new products, it’s a rare product that stays at the top of its game for four months, let alone four years. Nevertheless that’s exactly what the SE530s have done; ever since we reviewed them, and declared them as such, they’ve remained the best universal-fit earphones money could buy, they’ve remained so.


The SE535 earphones have a lot to prove, therefore. Admittedly that they are the SE535s and not the SE540s, or any larger a numerical increment over their predecessor, should indicate the nature of the improvements. The SE535 earphones aren’t meant to be a radical overhaul, but rather aim to offer a number of small tweaks which should add a new level of refinement to the flagship of Shure’s range.

There’s no denying that the SE535 earphones have their work cut out in one particular. Over the past years the SE530s have fallen in price dramatically. The drop from about £420 when we reviewed them, to under £250 as of now, has only cemented their position of being an incredible buy. The SE535 earphones are entering the market at a much less compelling price; the cheapest we could find them was a little under £420. That was expensive in 2006, and it’s no less so now.


By anyone’s reckoning, Shure needs to have produced something very special to persuade anyone to spend £170-plus more on its newer model. At least while any stores have an inventory of the SE530 earphones remaining.

Improvement number one is one that will either have you grinning surreptitiously in delight, or completely nonplussed – we sit on the former side of the fence. This is because while the SE535 earphones are available in the tastefully elegant metallic bronze finish sported by the SE530 before them, they’re also available in a clear plastic finish, which looks absolutely fantastic. Maybe it’s our inner geek speaking, but there’s something fundamentally cool about being able to see the internals of a high-end piece of audio equipment – or any item of consumer electronics for that matter.

Improvement number two may prove even more divisive of opinion. As ever, Shure employs an over-the-ear cable design, which helps reduce cable microphonics (that is, brushing noises). The SE535 now has a length of formable wire where the cable meets the driver unit. It takes a bit of time to get used to this stiffness, and in fact the entire Kevlar-reinforced cable is tougher than the SE530s’ was, but it does help keep the fit secure if you’re moving around a lot.


Those that do find themselves longing for a more flexible (pun apologetically intended) wiring option shouldn’t despair. The most interesting feature of the SE535s is found right at the point where the cable joins the drivers. Instead of the wiring being directly attached, inside these units, Shure has implemented a lock-snap MMCX connector. This is free to rotate, so there’s little chance of it disconnecting unintentionally, and the other benefit is obvious. If, providence forbid, you somehow break the wiring of your SE535’s you’ll be able to buy a new length of cable – which is definitely cheaper than replacing the entire set of earphones. Similarly, it’s entirely possible that Shure might offer cable lengths with in-line remotes or thinner wiring to suit different customers’ needs. In an ideal world we’d all buy custom-made earphones designed exactly to the specification we want anyway, but as the world is far from ideal this is an excellent step further from Shure towards making universal-fit earphones truly universal. 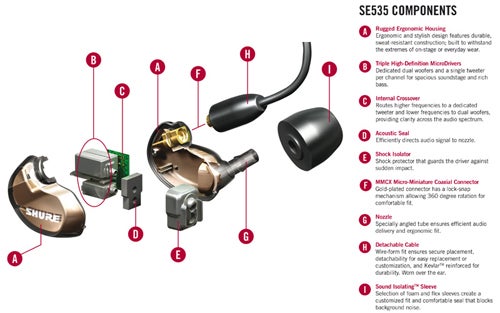 The SE535’s driver units have been overhauled, too. They are now a little flatter, and generally just smaller, so they fit into the ear that bit better. If you happen to wear earphones while in bed that will be a particularly useful as you can wear the SE535 earphones without having your pillow shove the ‘phones through your eardrum. Not that a more comfortable fit isn’t an improvement in every other situation as well.

The selection of tips available is as comprehensive as ever, with three sizes of Shure’s renowned hard black foam tips, three pairs of silicone tips, a pair of softer yellow foam tips and a pair of triple-flange silicone tips. As ever the black foam tips provided us with excellent noise isolation and a very comfortable fit. While the size of the SE535 earphones precludes them from ever being as comfortable as the likes of the Klipsch X10i earphones they’re certainly not going to cause any fatigue if you wear them for an extended period of time. 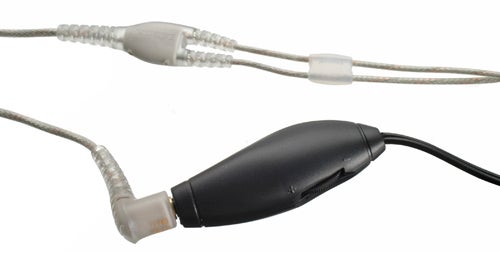 As ever this great isolation means that, as well as blocking out annoying external interference, you also don’t have to turn your music up as loud; which is good for the longevity of your sense of hearing. While you don’t have to, though, you may want to, because like the SE530 earphones, the SE535s sound, well, bloody incredible to be blunt. This is no surprise. We could hardly expect Shure’s electrical magicians to make the SE535 earphones sound worse than their predecessors.


The triple-driver arrangement is unchanged from the SE530s, with two woofers still handling the low- and mid-range and a dedicated tweeter rounding out the mix with the high-end frequencies. The passive crossover once again does an entirely transparent job of sending the right sounds to the right drivers, without ever producing anything but a full cohesive sound.


The SE535 earphones exhibit Shure’s characteristic balanced sound, free of any colouration or distortion. The silky smooth bass isn’t as overt as on other headphones, but we always favour accuracy of presentation so this suits our tastes perfectly. Mid-range reproduction is equally detailed, and remains precise no matter how high you crank the volume up – even at painfully loud levels.

But where the SE535 earphones just about take the edge over the SE530 earphones before is their top-end clarity. We reckon there’s just a bit more detailing to be heard in the very high notes, which have a delightful sparkle to them. It’s not so much of a difference that we’d ever recommend anyone upgrade from a pair of E500PTH or SE530 earphones to the SE535, but the latter definitely maintain the Shure 5xx-series’ legacy as the best universal-fit earphones to ever grace TrustedReviews.


If you have something over £400 to spend on a pair of earphones, cost be damned, then the Shure SE535s are without a doubt the best you can buy and we recommend them unreservedly. If you’re constrained by budget, however, then the SE530 earphones, available for over £150 less, are a better buy – just hurry to grab them before they’re out of stock.