What are the Sennheiser IE 800?

The Sennheiser IE 800 are some of the most expensive universal earphones you can get. They cost £600, making them terrifyingly pricey for most people.

They don’t have the usual sound we expect from a really high-end earphones, though. With some of the deepest bass we’ve heard in IEMs they’re surprise party monsters. 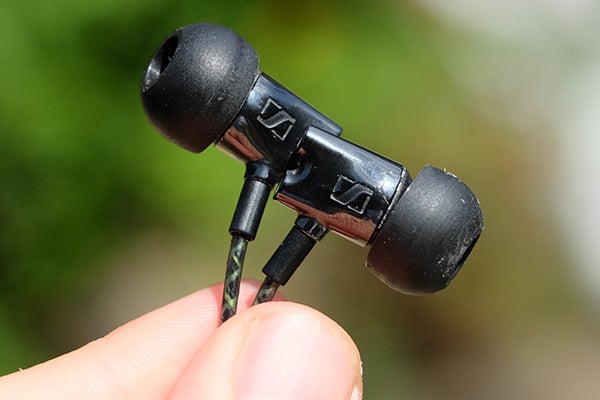 The Sennheiser IE 800 are far smaller than most other super-high-end earphones. Next to the Shure SE846, perhaps these headphones’ most obvious rivals, they look quite small.

It’s because the Sennheiser IE 800 use a single dynamic driver per earpiece where other high-end sets tend to use a bunch – as much as four drivers per ear. The driver is just 7mm in size, making it even smaller than the ones used in some £10 jobbies you’ll find encased in plastic blister packs on the high street.

Some might say the tiny size makes the expense all the more galling, but these are exceptionally well-made earphones. 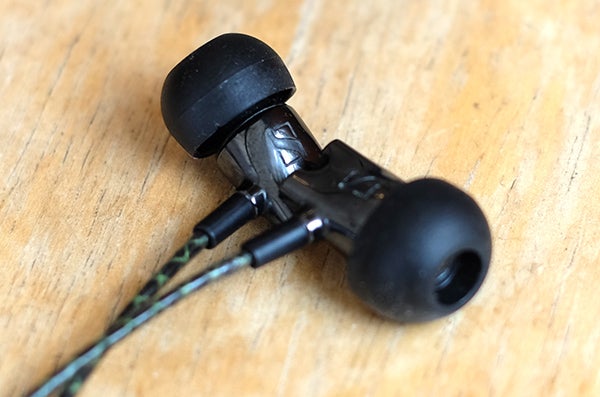 They are cased in scratch-resistant ceramic where some other high-end earphones, like the Shure SE535, continue to use plastic. Some of the inside parts are plastic, but this helps to keep the weight down.

We found the Sennheiser IE 800 fairly easy to fit, and quite comfortable. The earpieces weigh just 8g, and they use a similar fit to Sennheiser’s lower-end earphones, resting optimally at the entrance to your ear canal rather than burrowing deep into it. It’s good news for people who don’t like terribly invasive IEM earphones, although you need to use the right tip or they’ll work their way out of your ears.

The IE 800 do not use regular tips, though. The tips’ inner part is hard plastic rather than silicone, in order to let you get deeper into the earpiece aperture. It’s a smart design, but one we’re glad isn’t generally reproduced in lower-quality earphones – without very careful construction this would be an obvious failure point.

Some may be bemused at how little attention has been paid to the Sennheiser IE 800’s long-term survival chances, though. They do not use a traditional removable cable, usually a must-have in any earphones costing more than about £100.

Instead, the cable breaks away at the point where the L/R cables join, using a standard 2.5mm socket. There’s an obvious reason why – the small earpieces make implementing a fully removable cable very difficult – but it still doesn’t fully excuse it. 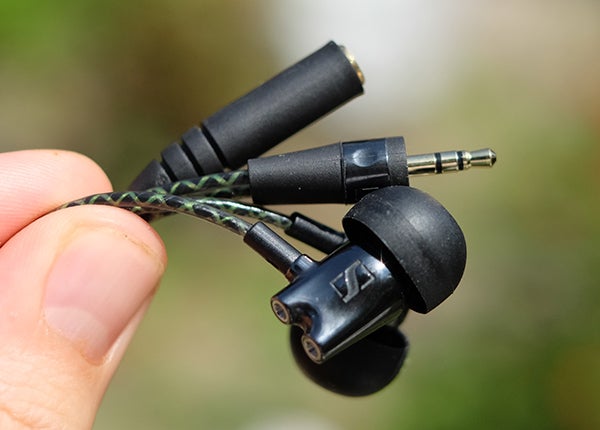 It is enough to ensure you don’t have to replace the earphones should the end jack connector fail, and means you can buy a fairly cheap extension cable for at-home use. Who would use in-ear headphones at home? Someone willing to pay £600 for them.

Still, it’s perhaps not as good as the normal kind of removable cable. There’s no chance of being able to replace a single earpiece should it fail, and the 2.5mm plug’s terminal is an unfortunate weight on these otherwise super-light earphones.

Sennheiser originally said it was going to produce a cable with a remote control on it for the IE 800, but we’re yet to see that emerge. And it has been quite a while since they were announced. There’s also no obvious place to buy a replacement cable as far as we can see. 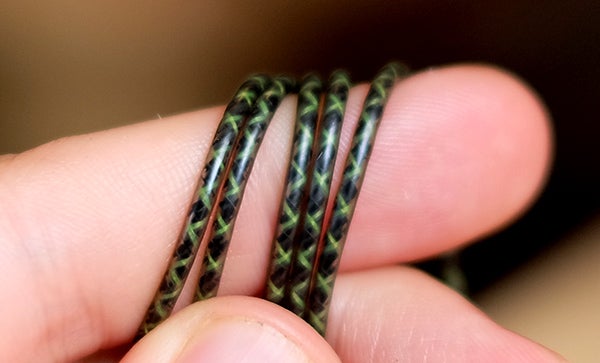 As much as we like insurance measures when it comes to earphones, the cable is very high-quality. It’s a pure oxygen-free copper cable reinforced with kevlar, and feels a lot tougher than most cables of its thickness.

In practical terms it’s not perfect, though. It creates quite a lot of microphonic noise, that sort of rustling you hear when moving about wearing IEM earphones. It’s more of an issue than it is in the cheaper Sennheiser IE8i. So while the earphones provide decent noise isolation, microphonics can be an annoyance if you’re walking around and not listening at a louder volume. Microphonics can be reduced by looping the cable over you ear but these earphones are not designed to be worn that way.

All of Sennheiser’s earphones use dynamic drivers, but it is the IE 800 that prove Sennheiser is truly the master of the form. Just about all other earphones makers at this sort of high-end level use multi-driver balanced armature setups, where each pair of micro-drivers is responsible for a different part of the frequency spectrum.

In comparison, the Sennheiser IE 800’s use of single dynamic 7mm drivers seems like madness. However, the calling card of the bespoke driver design is ultra-wide dynamic range, letting the earphones reproduce deep bass and high-frequency treble using the one tiny unit. 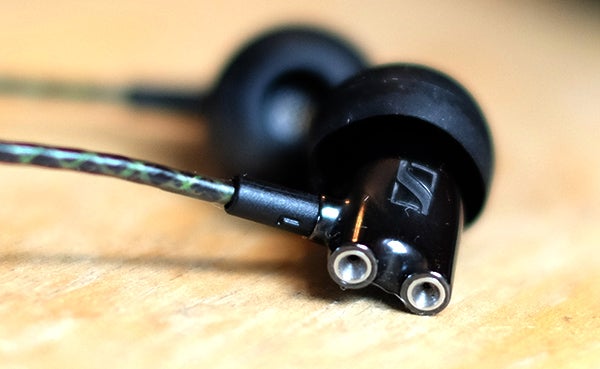 Oddly enough, it works. The Sennheiser IE 800 have exceptional bass depth and power. It’s top-quality bass too – agile, taut and intensely disciplined. We listened to them next to the Sennheiser IE8, a pair otherwise renowned as a bass-lover’s top-end IEM, and found the lower-end model shamed by the extra speed and clarity of the IE 800’s bottom-end.

It really is excellent, shaming most full-size headphones let alone in-ear ones. However, the bass is also the element likely to put off many potential buyers.

While very well integrated, like a subwoofer that fits perfectly into a home cinema system,  it does give the Sennheiser IE 800 a tone that some may not expect. Ultra high-end headphones are often quite delicate and pristine-sounding, and some people simply won’t like the level of bass here.

It doesn’t ruin separation as it might in a lower-end set, but your attention naturally heads to the bass-register instruments more than it would with, say, the Phonak PFE 232. It’s a question of taste.

It’s not alone in going for this more powerful sound, though. The AKG K3003 go for a similarly-powerful signature.

And much like the K3003, the Sennheiser IE 800 also have very detailed treble. That Sennheiser has managed to get this range from a 7mm driver is quite astounding.

It’s the kind of searching treble that picks out background noise in recordings, and will really show up any issues in your material – such as any old, lower-quality mp3s you made back in the 90s. For many, this is exactly what an expensive pair of earphones should do. But it makes the Sennheiser IE 800 somewhat less easy to live with. 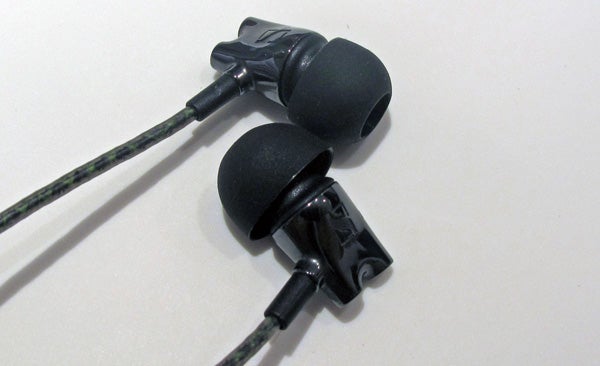 There are some treble spikes in the IE 800 too, in the higher registers. They are part of what supplies that sense of being ultra-detailed, ultra-critical, but may also leave some ears fatigued, and can lead to an impression of there being a separate high-frequency ‘resonance’ to – for example – some women’s voices. Speaking from memory, the AKG K3003 supply somewhat more impressive detailing, but the IE 800 are excellent too, and a few hundred pounds cheaper.

The Sennheiser IE 800 mid-range is beautifully textured and tonally superb. It’s nowhere near as warm-sounding and easy-going as the lower-end Sennheiser IE8, with not a single extra inch of flab to caress your ears in the way, for example, Bowers & Wilkins’s headphones do, but it’s fab.

However, the mid-range does tend to get overpowered by the treble and bass, which are at times a bit too keen to show off quite how high and low they can go. It may sound cynical but at times the IE 800 earphones can seem like an exercise in defence of the humble dynamic driver, a showcase of quite what it’s capable of compared to what we normally get from a dynamic earphone.

There is one way to tame the earphones’ top end – pair it with a nice warm-sounding headphone amplifier – but despite the price these still feel like portable earphones, rather than an in-ear alternative to big open-back headphones.

They are not really such an alternative sonically, either. While their separation is excellent, the Sennheiser IE 800 do not offer the same scale of soundstage as Sennheiser’s full-size HD-series headphones. We’re a long way from in-ear headphones that sound as epic as the Sennheiser HD 800. 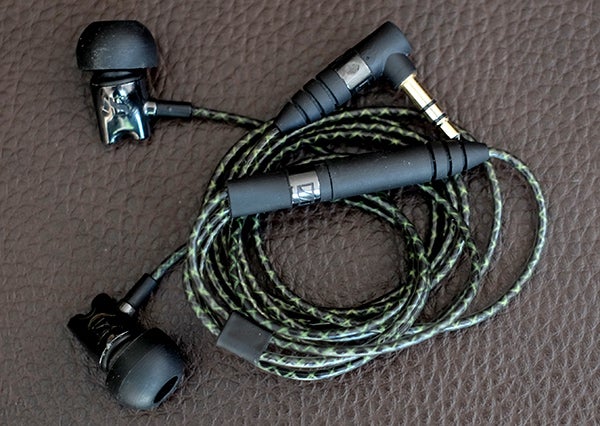 Should I buy the Sennheiser IE 800?

Who would buy the Sennheiser IE 800? It’s not a very easy question to answer. They don’t have the obvious professional applications of a custom IEM, and are a lot more expensive than the vast majority of earphones, including those most people think of as super high-end.

It’s easy to label these earphones as being for people with more money than sense, but the truth is that they comfortably outperform the £300 Sennheiser IE8i. People often think you need superhuman ears to tell the difference – you don’t.

What we’re somewhat less convinced about is that Sennheiser’s admittedly-impressive reimagining of the dynamic driver is really better than the multi armature/dynamic driver combo used by rivals. While the Sennheiser IE 800 perform superbly across each main frequency ‘sector’, there does seem a slight reliance on too-discernible spikes to infuse energy to the treble. And although the bass response is hands-down impressive and applause-worthy, it’s not going to be for everyone.

As with any earphone or headphone of this grade, it’s more a case of character than quality that we need to assess. Just make sure this is a personality you can get on with before shelling out £600.

The Sennheiser IE 800 are true high-end earphones that both show up Sennheiser’s £300 pairs and show what dynamic drivers are capable of. They’re not perfect, but they are seriously impressive.