Phonak is primarily a maker of products for those with hearing problems – hearing aids of all shapes and sizes. But in 2008 it diversified into headphones, quickly becoming perhaps the greatest earphone maker most people haven’t heard of. Following-up the mid-range PFE 012 and 112 headphones, it has jumped into the deep end with the £400 Audeo PFE 232. It’s the company’s first dual-driver model, and certainly one of the best pairs of in-ear headphones ever made.

You wouldn’t guess their price or grand stature on design alone, though. The look is deliberately unassuming, a minor tweak on the design of the £80 PFE 012, a runner-up for our headphone of the year 2011 award. This tweak is based around a little dimpled circle on the back. It’s not something that innately suggests the high price of these headphones – rather merely differentiates them from their cheaper siblings.

The buds are made of the same stuff too – plastic. Phonak told us it was keen on keeping the same look as the other PFE pairs, and that was part of the reason why the PFE 232 have “just” two drivers per earpiece rather than three or four of the Ultimate Ears Triple.Fi 10, Shure SE535 and Westone 4. More drivers equals bigger earpieces.

From a marketing perspective, it’s a bold move. Not only do the Westone 4s have double the number of drivers, they are a bit cheaper to buy too. Mention of “marketing” is important, mind. Adding more drivers does not necessitate better sound.

Looking beyond the conservative styling, the PFE 232 hardware design offers a huge improvement over the PFE 012/022 and 112/122 – it uses a removable cable. For a £400 set of earphones, this is an absolute must in our opinion. While the included cable is top-quality, we’ve lost one too many a set of IEMs from the connection deteriorating at the jack. Not a happy occasion, and one that could spark off a bout of severe depression when we’re talking about a £400 set.

Phonak includes two cables in the box, one with the mic/remote housing and one without. To call it generous at the price might be overdoing it, but it helps.

The cable has an almost soft-touch finish, similar to that of the PFE 112, and it’s one of our all-time favourites. It’s one of the few cable types to significantly reduce tangling without any drastic design changes, by making it slightly less bendy than the norm, and feels – well – nicer than the more rubbery type. At the end is a high-quality right-angle jack. Replacement cables aren’t being distributed in the UK at this point, so we can’t tell you how much they’ll be. 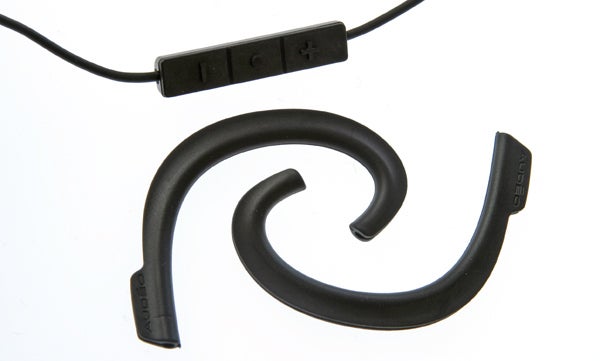 Like the PFE 112/122 before it, the PFE 232 come with flexible plastic ear loops for those who prefer not to wear them with the cable falling straight down. They’re a little more robust than the previous type, locking-in the cable much more successfully. Like the earphones themselves, they’re not desperately stylish, but they do their job very well. The loops don’t cause discomfort because they put virtually no pressure on your ear – instead floating above them for the most part. They make the PFE 232 somewhat viable as a pair of sport earphones, although the potential sweat damage is enough to dissuade us from using such a valuable pair.

Aside from the loops and the extra cable, the Phonak PFE 232 come with a wide selection of tips, a carry case, a cleaning tool and a little plastic briefcase holding the three extra pairs of sound filters – which alter the earphones’ sound signature. More on these multiple personalities later.

The tips selection is very good, including multiple sets of black single-flange silicone tips and three sets of comply foam tips. Whether you prefer the feel and isolation of rubber or foam is a point of preference, but the inclusion of foamies is a welcome addition you very rarely get with earphones that aren’t worryingly expensive. There are no double- or triple-flanged rubber tips, but such things have never been included with Phonak’s earphones. It’s just not how they roll.

Like every visible element of the PFE 232, the carry case is low-key. It’s made from fabric, the only luxury element being the shiny soft interior. The more petite and simple earphone cases are, the more likely you are to use them, though. This one is more compact than the Shure SE535 case, fitting easily into a pocket.

While out and about around town, the  PFE 232 provide enough sound isolation with rubber tips to sufficiently block out the sound of trains or the hellish roar of the tube. However, the best isolation is provided by the foam tips, and when using rubbers the Phonak PFE 232 are bested by the Shure SE535 in this respect. The Shure “olive” tips are really rather good. 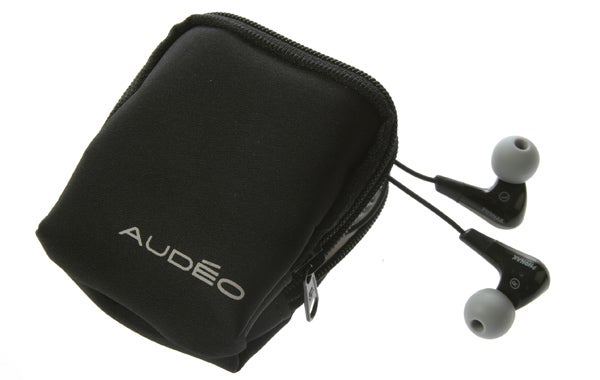 If noise isolation is a big priority, extra foamies are available for around £18 for three pairs. They have a much shorter shelf life than silicone tips – quite simply they get pretty gross after a month or so of use, no matter how clean your ears may be. Don’t blame us if you use them longer and get an ear infection.

By far the most interesting accessories of the Phonak PFE 232 earphones, though, are the sound filters. These featured in previous Phonak earphone designs, in the very same form in fact, and sit over the aperture of the earphone, moulding the sound before it enters you ear to tweak the bass, treble and mid-range. To look at these tiny little discs, you’d assume they couldn’t have much of an effect on the sound signature, but they do. To an extent that gives the Phonak 232 a split personality – a case of Jeckyl, Hyde and Clive, if you will.

When we reviewed the Phonak PFE 012, we found the interchangeable filters wonderfully useful. Both the mid-centric and bass/treble booster tips were perfectly valid choices, and a good way for those new to high-end headphones to find out the kind of sound signature they gravitate towards – auditioning IEMs is not something you can usually do in HMV.

The very same filters are used with the PFE 232. They come bearing a set of grey filters, which are the most balanced (Phonak says they promote mids), while a neat little toolbox houses the bass-boosting green filters, the bass-and-treble-boosting black ones and an additional set of greys. You plug them in and remove them using a little supplied tool – there’s a thread on the inside of each filter to help out.

We’re surprised at how badly Phonak has relayed what these filters are for, though. The manual tells you how to remove them, and they earn a bullet point on the packaging, but there’s no bigging-up of Jeckyl, Hyde and Clive’s skills – no detailed expounding on their sonic effects. It’s a good job we’ve spent many hours with each, then.

Unfortunately, the filter customisation doesn’t work as well here as it did in the PFE 012. After all, one wrong brush stroke might destroy a masterpiece and these dual-driver headphones are a lot higher-end than their PFE brothers. In our opinion, there are wrong and right filters to use with the PFE 232. Jeckyl and Hyde should be consigned to the past. Clive is the man of the future. Clive is the “neutral” grey filter. 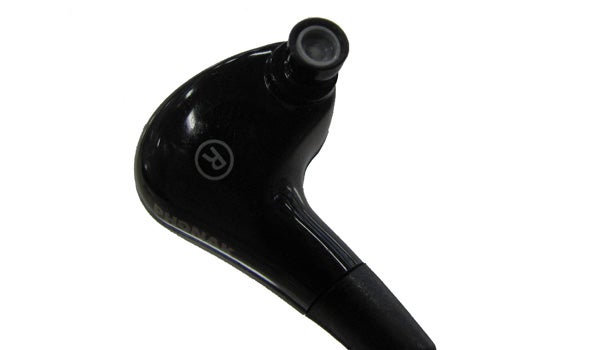 Why are the other two duds? The bass-boosting green filter is effectively the difference between the PFE 112 and the PFE 012 – used to up the bass for a “lower-end” audience (no offence, like, we love the PFE 022), as both sets use exactly the same driver. They add some warmth to the PFE 232, but it’s at the expense of what these earphones are really about – detail and refinement. Deliberately downgrading the sound quality of a £400 earphone seems a little bonkers to us.

Then there’s the black filter, which emphasises both bass and treble. Used with the PFE 112, this is the “fun” filter, but here it over-does the top-end, resulting in a slightly harsh sound in tracks that haven’t been immaculately mastered – exacerbated by the slightly scooped signature, which encourages you to up the volume a tad. Stick with the grey filter, though, and you’ll be greeted by a sound more refined and insightful than just about any universal IEM on the planet.

The Phonak PFE 232 offer supremely detailed high- and upper-mid frequencies, rendering vocals with spectacular clarity and definition. No other high-end IEM we compared these earphones to, could match the sensational texture they brought out of Kate Bush’s half-husky vocal on 50 Words for Snow’s Misty. What’s crucial about the sound here is that the ultra-high levels of detail in the treble continue further down into the mids, bringing wonderful separation that bests the Ultimate Ears Triple.Fi 10, Shure SE535 and ACS T2. The soundstage isn’t quite as wide as Shure’s top-end IEMs, but the far greater treble definition provides a similar sense of scale.

That the sound brings out its best bits in this part of the frequency spectrum makes using the comply foam tips a good idea if you’re going to use them in a noisy area – its most magical effects are spoiled by the intrusion of ambient noise. And the foam provides better isolation than the simple rubber tips. In the right conditions, the Phonak PFE 232 are intensely insightful in a manner that’s both challenging and rewarding.

They dissect the synth-y soundscapes of M83’s Midnight City to the  point where you’d swear you could calculate the oscillations of each wave by ear, and all without resulting in any of the “clinical” impressions that some of Etymotic’s more analytical IEMs can give off.  This is largely because bass performance is also great. It’s deep and taut, although very carefully controlled – and not an ounce more than is needed. The intensity here comes from the upper-mids and high-end, not from epic bass.

This is very much to our taste, but does ensure that the Phonak PFE 232 aren’t quite as fun as the bass-centric Sennheiser IE8i or the slightly more exhuberant Ultimate Ears Triple.Fi 10. While we’d argue that the Phonak PFE 232 are technically significantly better than both in many respects, many will be better off with one of those more affordable – but still excellent – sets. These are enthusiast earphones that offer accuracy and insight rather than “ear candy”, at a level that can be compared to the high-end part of open-back over-ears headphones like the AKG Q701. That’s high praise for an in-ear pair. 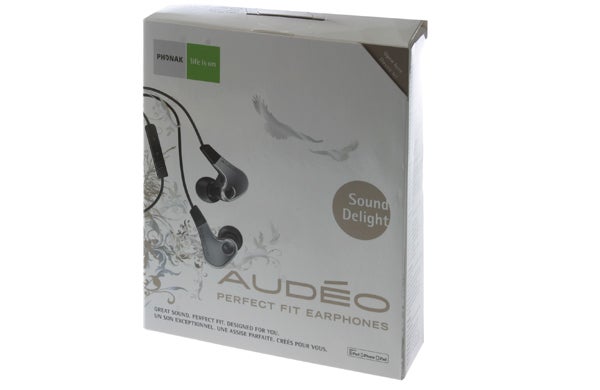 The Phonak PFE 232 offer a style of sound very well-suited to the £400 price – and it’s one that beats the vast majority of its rivals in the fields it excels in – definition and detail. It’s simply higher-fidelity than the output of Shure’s and Ultimate Ears’s top-end pairs, if a little less fun. They have a price to match, though, retailing for £80 more than the best reputable price we found for the SE535 and £180 more than UE’s top universal earphones. Are they worth it? We think so. But should everyone looking for a high-end set buy them? Not when the Etymotic ER-4P and UE Triple.Fi 10 cost half the price. However, if you’ve exhausted these options and are willing to pay for the step up, we can’t deny that they do supply the goods.

Phonak’s PFE 022 and 122 both wowed us with their sound at release, and the PFE 232 has done it yet again. However, this time they are more expensive than alternative models, rather than cheaper. For £400, you get class-leading high-end detail, without the cold and clinical feel that comes to define some analytical earphones. We wish they didn’t cost almost twice as much as the Etymotic ER-4P and Ultimate Ears Triple.Fi 10 Pro, but the performance justifies the heavyweight pricing.