What is the SCUF 4PS controller?

When it comes to professional-grade PS4 controllers, there aren’t that many options, unless you look at the SCUF 4PS.

For the Xbox One, there’s a few top-notch options including the official Xbox One Elite Controller or the SCUF Infinity 1. But the choice for PS4 is far more limited.

But, thankfully the SCUF 4PS exists and it brings you the classic DualShock 4 controller with some added bells and whistles that might make you want to fork out over £110 for such a pad.

The base model is £95.99, but add any of the various customisation options and the price can soar up to around the £150 mark.

Is it worth the money? I’ve put the SCUF 4PS through its paces to find out. 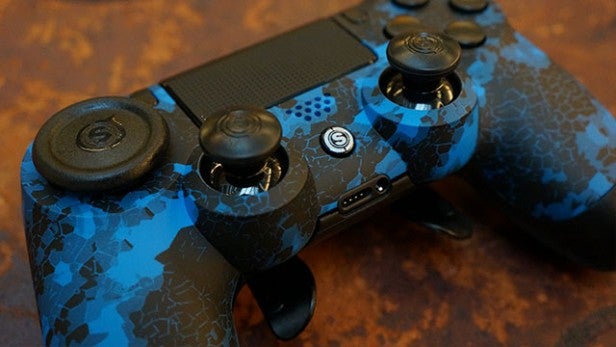 The basic design of the SCUF 4PS controller is an exact mimic of the official DualShock 4. The touchpad in the centre, is a little smoother and features less of the dotted pattern than the official pad, but is just as functional. It’s got the in-built controller speaker too. All the usual buttons are featured, and the 4PS has retained the curvaceous shape of the original.

There are just a few additions that make this controller have a professional edge on the classic.

Your SCUF 4PS journey starts at the SCUF website, where you’ll need to choose a base design, which will come down to your colour preferences and partly your price range too. The pure black model is £95.99; bump up to coloured buttons and it’s £109.99. Having a coloured body will mean the controller starts at £119.99, while mimicking a player, team or partner print will have base prices starting at £127.99.

Opting for the digital camo series like I have here sees prices start at £109.99.

You can opt to remove the symbols on the face buttons if you so wish, for £4.99 on top of the basic cost of course too.

The overall build quality also speaks volumes as to its price too. You’re not looking at a cheaply-made pad with the SCUF 4PS. It’s well-made and is nearly exactly the same weight as the standard DualShock 4. The soft-touch finsih on the front face of the controller is a welcome change and even this rather garish colour makes a difference from the standard black or white of the DualShock 4.

In terms of build quality, I only have one complaint and it may be unique to my particular pad. The front and rear panels of the body of the 4PS don’t quite meet at the base of the analogue sticks and along by the headphone jack. It’s extremely irksome for such a premium-priced product, and makes it look a bit sub-par despite the polish found across the rest of the 4PS’ design. 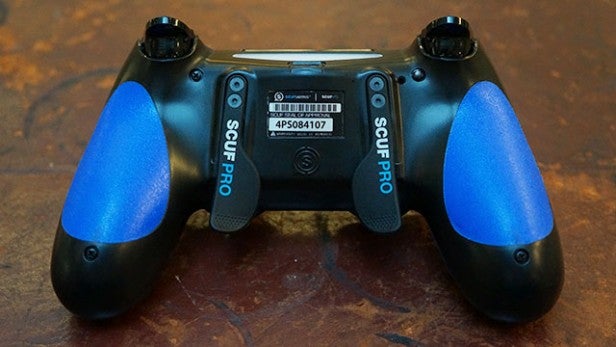 All the basic models come with the two rear paddles and rear grips, which are the two most important features of the 4PS.

The
rear paddles are conveniently located within middle-finger’s reach,
hanging down in a way that you don’t have to stretch making the effect
uncomfortable. SCUF has also flicked out the paddles at the end, making
them curve around the tip of your fingers. They’re textured too for
additional grip.

As standard the rear paddles are mapped to X and circle, which is useful for most games – especially FIFA 16, I’ve been told – but if that’s not to your liking you can choose to add remapping when you customise your 4PS before shipping. That will add an extra £19.99 to your overall cost, but it’s a useful feature to have if you’re not content with doubling up your X and circle buttons.

Remapping is a bit of a fiddly process though, especially compared to the simplicity of the Xbox Accessories app for the Xbox One Elite Controller.

To remap on the SCUF 4PS you’ll need the accompanying Mag Key, which looks like a keyring, but actually uses electro-magnetic technology inside. You place the key on the back of your 4PS so that the magnets connect. Then you hold down the paddle and the key you want to remap it to at the same time. Then take the key off the back and move it at least 5cm away for the remapping to complete.

It’s a laborious process and one that will need to be repeated everytime you want to reassign buttons to your pair of paddles.

There’s also only two paddles instead of the four on both the SCUF and official Elite Xbox One controllers. Whether that’s an issue will be down to personal preference, but I was perfectly happy with the two.

As for the grips, they’re grey in colour by default, but you can opt to
choose your own colour when customising. Opting for red, white, blue or
green will cost you an extra £1.50.

Putting colour options aside, it’s the functionality that serious gamers will find hard to
beat. Their rubberised, almost soft-touch finish means that the 4PS
stays in your hand regardless of how sweaty your palms get. 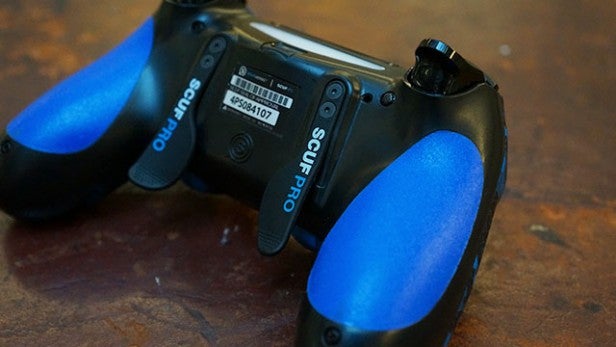 When it comes to analogue sticks, the 4PS as standard comes with the same set as the DualShock 4. But, for a price, you can choose the sticks you’d prefer to use. Options include domed or concave sticks with lengths ranging from medium through to regular and long. You’ll need to fork out an additional £4.99 per stick if you want to upgrade them from the basic options.

Unlike the SCUF Infinity 1 or the Xbox One Elite there isn’t the option of having multiple analogue sticks and changing them on the fly. So once you’ve made your decision, you’ll need to be happy with it.

One thing that you can change on the fly is the D-Pad. You can simply opt for your 4PS to feature the classic arrow-style D-Pad, or for an extra £6.99 you can grab yourself what SCUF calls a Control Ring. This round disc clips into the D-Pad and gives you a larger surface area to play with.

Some say that this makes it a lot easier to play fighting games, but I personally haven’t yet found a use for such a feature. It’s raised, rubberised edge is just a little limiting, especially after using the smooth metal faceted D-Pad found on the Xbox One Elite Controller. 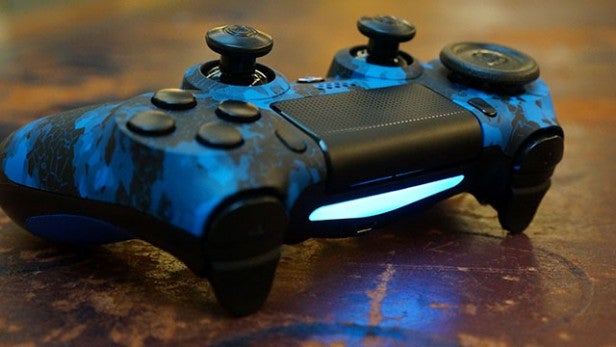 The SCUF 4PS is an excellent professional-grade controller. It adopts the DualShock 4 design whilst adding some valuable additional features, the paddles being a particular boon.

However, the fact that they’re automatically mapped to circle and X isn’t a very useful for most games, especially FPS games where those face buttons are usually jump or crouch/prone.

I would recommend that you opt for the electromagnetic remapping if you want to make real use of those back paddles. Yes, it may be a faffy process, but once I found a button combo that worked for me it made things so much better.

For example, changing just one of the rear paddles to triangle made the paddles far more useful across a variety of FPS titles, as well as other genres.

The analogue sticks are very responsive, but often slightly limited travel in comparison to the DualShock 4. This wasn’t an issue for me, but more professional players may notice the difference. 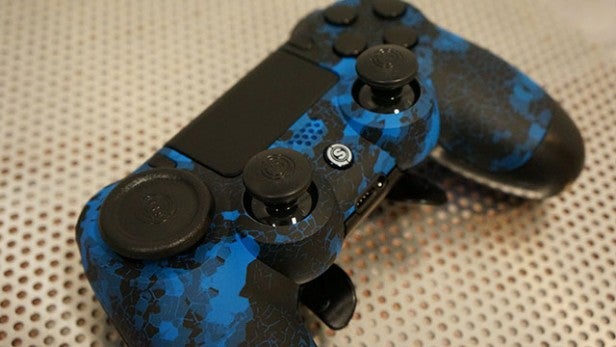 Should I buy the SCUF 4PS controller?

If you want the a professional-grade PS4 controller then the SCUF 4PS is one of a select few viable options. Thankfully the 4PS will be a solid addition to your PS4 peripheral collection. Its durable design, excellent rear grips and soft-touch finish make for an excellent controller.

Plus, those rear paddles make it a lot easier to move faster around the pad itself.

The only thing that may put you off is the price. As I’ve mentioned before, base prices start at £95.99, which includes the rear paddles, all black controller and grey grips. However, if you want the electromagnetic paddle remapping, a choice of analogue sticks, the control ring or more colour options, then you’ll need to evaluate how much money you want to spend.

Here’s a quick overview of the customisation options available:

I believe that you can easily make do with the plain black controller plus electromagnetic remapping, which would only cost you £115.98 for the top end features. You’d certainly notice the difference over the classic DualShock 4 controller.

Although it’s not quite on the same level as the Xbox One Elite Controller, the SCUF 4PS is certainly an excellent choice for PS4 gamers looking for a competitive edge.