What is the SCUF Infinity 1?

With the success of the Xbox One Elite Controller, you might be wondering whether there are any other professional gamepads on the market.

Well, that’s where the SCUF Infinity 1 comes in. A professional-grade, customisable pad, it comes complete with paddles, rubbery grip and a premium soft-touch finish.

This is a controller for those wanting a competitive edge, as you can build up your controller from the basic £95.99 option to one that includes a number of bells and whistles.

But is it better than Microsoft’s Xbox One Elite Controller? I’ve put the Infinity 1 to the test to see how it measures up. 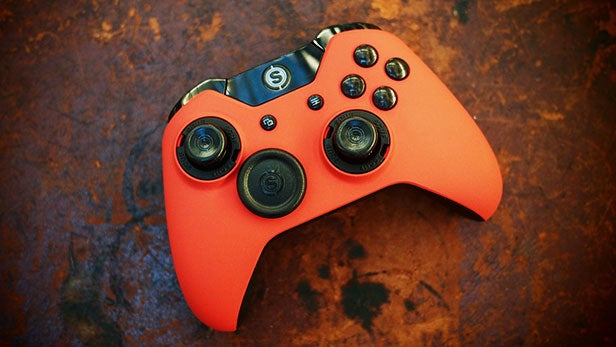 Those looking to get a professional-grade controller experience will be pleased to learn that the process of buying the SCUF infinity 1 begins with you being guided through the company’s customisation process.

Ultimately, it’s up to you how you want your Infinity 1 to look and function, so SCUF presents you with all of the options before the pad even hits your lap. Is this a good thing? Personally, I quite like that with the Xbox One Elite you’re given the option to change elements on the fly, rather than having them built in from the outset. But you are at least getting the personal touch here.

The Elite Controller is available only in black, but with the Infinity 1 you’re spoilt for choice. You can choose from a tonne of colour combinations, skins and even some combos created by eSports professionals themselves, if you want to mimic the big boys.

You can even pick the colour of your analogue sticks and their surrounding rings (although the options are more limited here), LED logo light and face buttons.

However, not all the customisations are purely cosmetic. Through the buying process you can opt to add in extra features that will make the SCUF Infinity 1 suitable for professional or super-keen gamers.

The basic Infinity 1 costs £95.99 in black, or £119.99 if you want a block colour. So far, so okay. However, it’s when you start adding the often necessary extras that the price starts to inflate.

Let’s start with the paddles. As a free upgrade, the Infinity 1 has four rear paddles that are automatically mapped to the four face buttons – B,Y,X,A from right to left.

They hang down from a shelf on the top of the battery cover, so that they’re within reach of your forefinger and middle finger. But because they don’t curve towards the grips, I found that they were a little fiddly to reach comfortably – even with my man-sized hands. 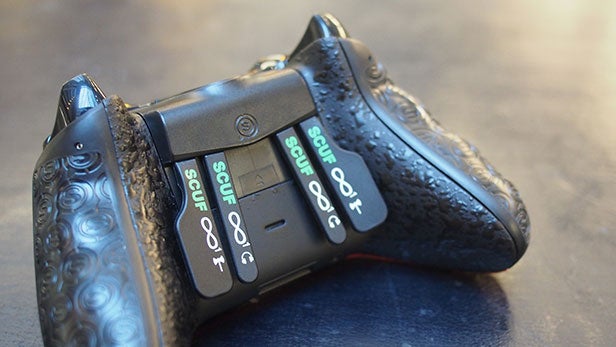 Thankfully, all four paddles are removable. Simply slide off the whole panel, and unhook each one. Removing them will leave a bit of a hole, revealing a pair of AA batteries behind, so be extra careful if your prone to liquid spillages.

Add in Electro Magnetic Remapping (£15.99), and you can change the configuration of the paddles, assigning them to whatever buttons you see fit.

However, rather than resorting to a handy app such as Xbox Accessories to do this, you’ll need to use the SCUF Mag Key instead. You’ll need to first turn on your Xbox One and the controller, then place the Mag Key between the paddles on the rear of the Infinity 1. It will snap into place with the help of the magnet – and then the fun really begins.

You then have to press and hold down the paddle you want to remap, while also pressing and holding the corresponding command on the other side.

Only a limited number of commands can be mapped to the paddles, though – A,B,X,Y, left D-Pad, right D-pad, left thumbstick down, right thumbstick down – so if you’re thinking of anything that isn’t supported, you’re in trouble. 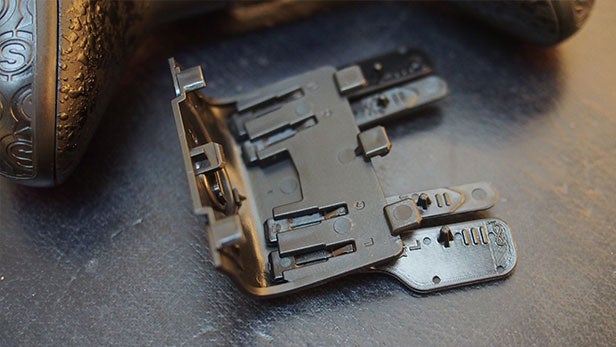 Next we move onto the triggers. On the Xbox One Elite, the travel of each trigger can be adjusted pretty easily. The same is true with the SCUF Infinity 1 – if you opt for the FPS grips (£11.99) at the point of purchase.

The FPS grip option comprises two parts. There’s the shiny rubber grips incorporating the SCUF logo, which improve the controller’s ability to stay firmly in your palms, no matter how sweaty your hands get. And second, there’s the Trigger Stop Mechanisms, which allow you to stop your trigger from depressing fully. This pack will be useful for those who prefer to play FPS titles rather than racers or RPGs.

In order to adjust the trigger mechanism though, you’ll need to insert the included 0.9mm Hex SCUF key – basically a super-skinny Allen key – into the hole in the grip and turn it clockwise to decrease the movement, or anti-clockwise to increase it.

Like the Mag Key, however, this is another little tool that you’ll need to keep handy if you want to regularly adjust the travel of your triggers. 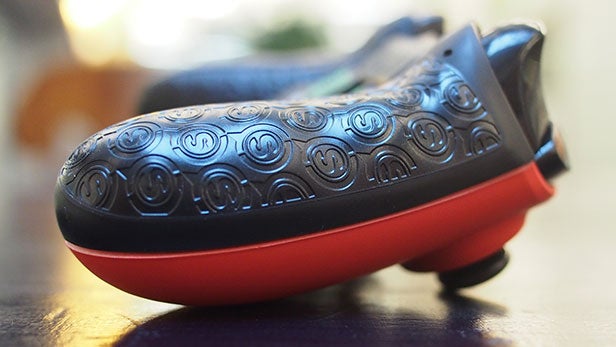 When it comes to the analogue sticks and D-Pad, there are plenty of customisation options on offer.

At the point of building your Infinity 1 controller, you’ll have a choice over which thumbsticks you’d like, plus the colour of them too. They’re available in long, medium and regular domed; long, medium and regular concave; or the Xbox One defaults. You could opt for a two different sticks if you so wish – but note that you’re looking at a cost of £4.99 per analogue stick change. The Xbox One defaults are free.

Each thumbstick is made from a high-grade “self-lubricating material”. This may sound a little strange, but it makes for analogue sticks that feel rubbery and grippy. While theu don’t feel quite as premium as the Xbox One Elite’s joysticks, they’re certainly responsive.

This is a decision that I’d recommend you think about carefully before you buy, since there’s no option to add any further down the line. Instead, you’ll need to buy the packs of Precision Thumbsticks from the SCUF website, which retail for £10.99 a pack. These come with three analogue sticks, either one of each of the domed or concave options.

For matching options, you’ll have to invest in two packs, bringing the cost to £21.98. This is yet another example where you’re paying to get the same customisation options as the Xbox One Elite Controller. 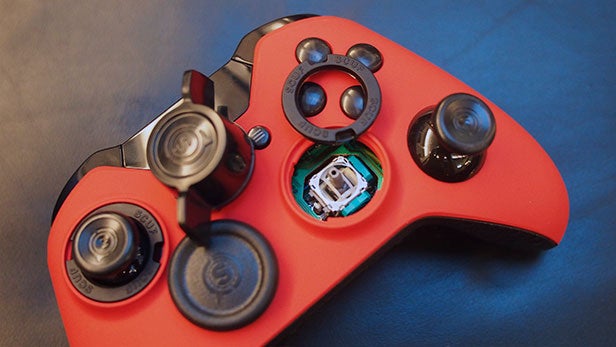 You’ll also need to make a decision about the D-pad. The basic option comes with a glossy plastic cross-shaped D-pad, but you can upgrade to the Control Ring for an additional £6.99. This circular D-pad option snaps onto the basic frame and provides a greater surface area on which to play – and, therefore, more control.

For those who love fighting games it’s the perfect addition, since it allows you to move around the D-pad with your thumb far more quickly as you don’t have to constantly reposition it.

I particularly like the fact that you can just clip on the Control Ring when it’s needed, and otherwise just have the more authentic D-pad option available beneath.

Aside from the added cost of all the optional upgrades – which in effect just bring the SCUF Infinity on a par with the Xbox One Elite Controller – there’s another issue.  Unlike Microsoft’s pad, the SCUF Infinity 1 isn’t supplied with any storage option in which to keep all the various keys and locks.

Instead SCUF offers a rather awesome zip-shut clamshell case via its website – at a cost of £10.99, of course – which moulds over the various lumps and bumps of the controller. It also features a small section in which you can store your accessories. However, in my experience, they failed to stay in place and were always falling out.

Without the customisation options, you’re looking at a standard Xbox One controller design, with all the triggers, bumpers, knobs and buttons you’d usually expect; the only difference is the logo.

A useful 3.5mm headphone jack sits at the base, along with the proprietary port found on the original Xbox One controller, so all headset bases are covered. 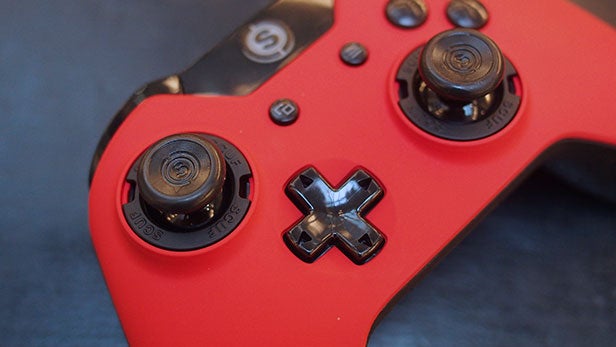 When the SCUF Infinity 1 is good, it’s really good. It’s rubbery grips and matte finish mould into your hands, with the raised logos of the FPS grips ensuring that it stays put.

And once you have it customised to fit your requirements then you set to go. For example, if you’ll be playing FPS titles or racing games for the majority of the time then there won’t really be much of a need to fiddle around with the remapping of the paddles.

But if you do want to swap around the remapping, trigger stops and analogue sticks then you’ll need to seek out the Mag Key, Lock and the Hex SCUF key in order to make adjustments. The remapping, in particular, is a laborious process.

And note that if you lose or misplace any of the above tools, then you won’t be able to configure your Infinity 1. 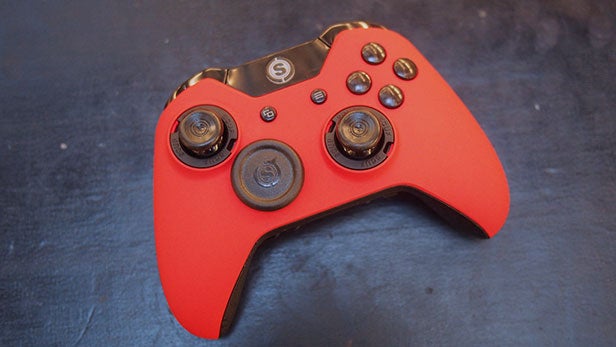 Should I buy the SCUF Infinity 1?

If you’re considering buying a professional-grade controller for the Xbox One, there are two choices open to you. The Xbox One Elite Controller or the SCUF Infinity 1.

Although the SCUF pad is great to use, it just isn’t as straightforward or as complete a package as the Xbox One Elite Controller.

Microsoft’s pad comes with three sets of analogue stick options, easy remapping for all buttons – not just the paddles, hair trigger locks, four paddles, and a sleek monochrome and metal design. In addition, you also get a clamshell carry case with an accessories section in which to keep it all in. All for £119.99.

Just buying the SCUF Infinity 1 is a complicated process, especially if you want to get the same features as the Xbox One Elite. Here’s a quick overview of all the customisation options available, both when building the pad and through the separate store:

For an Xbox One Elite equivalent – without the colour customisations of the SCUF pad – you’ll need to spend around £208. That’s nearly £100 more than the Xbox One Elite Controller pad – and I, for one, don’t believe you’re getting as premium a product for that extra dosh.

The SCUF Infinity 1 is a solid professional controller, but the fiddly customisation options and escalating price means that it pales in comparison to the Xbox One Elite Controller.