The UE49KS8000 joins the KS9000 series in doing more justice to HDR – or, at least, the key brightness part of HDR – than any other similarly priced TV.

It can hit brightness peaks at substantially above the 1000-nit level of most HDR content, allowing it to deliver both more punch and more subtle detailing in the brightest parts of the picture than any rival TV brand has yet achieved.

Test signals reveal it can’t hold on to its brightest output for all that long – around 14 seconds – before having to dim things down. However, it’s rare for real-world content to contain large expanses of peak brightness for as long as that. 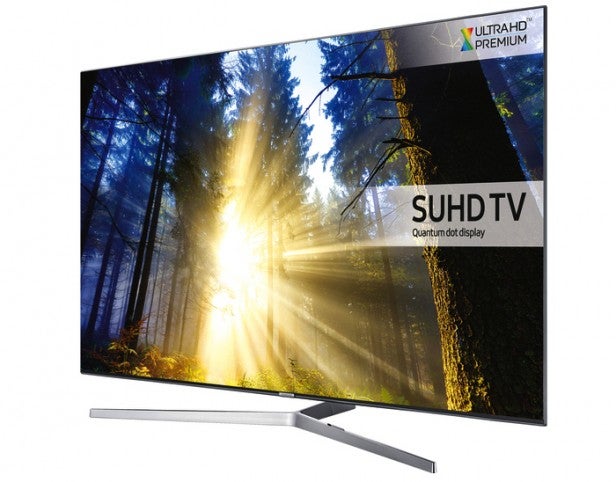 The UE49KS8000 also delivers reasonably deep, natural black levels for an LCD screen. There’s more greyness over dark areas than you see with TVs such as Samsung’s KS9500 series or Panasonic’s DX902 series, which use lights placed directly behind the screen. Plus, of course, LG’s OLED TVs deliver black-level depths that border on perfection. By edge LED standards, the UE49KS8000’s black-level performance is excellent – especially in the context of its high brightness levels.

The UE49KS8000 is also riotously colourful. Its Quantum Dot colour system combines with the extreme brightness to produce a spectacularly vibrant palette. In fact, aside from other high-end 2016 Samsung models and perhaps the Panasonic DX902, no other TV I’ve tested so far delivers quite such gratifying amounts of colour “volume” with the latest cutting-edge video sources.

Samsung has long excelled at delivering the extra detail and sharpness that UHD resolution makes possible. The UE49KS8000 keeps that tradition going with native UHD content, and also continues Samsung’s trend of delivering some of the cleanest, crispest upscaling of HD content. 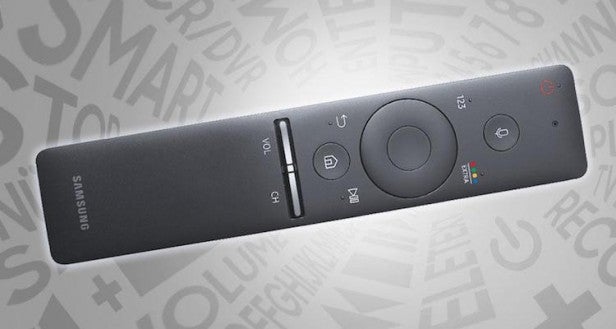 The UE49KS8000’s 49-inch panel doesn’t offer the resolution impact with native 4K content that bigger 4K TVs do, however. I’m not saying there’s no benefit, but it’s a simple fact that the bigger your screen, the more impact a native UHD resolution has. So if you can step up to the 55-inch KS8000, I suggest you do.

While the UE49KS8000’s pictures are capable of looking spectacularly dynamic with HDR sources, they’re not perfect. This is because scenes containing very bright objects against dark backdrops can cause noticeable backlight clouds and stripes around the bright parts. This can become quite distracting at times – especially if bright objects are moving around in a mostly dark image.

The only way to stop this light-banding effect is to turn off the smart LED local dimming system. But doing that drastically reduces the screen’s black levels, leaving dark HDR scenes looking disappointingly grey.

One other niggle about the UE49KS8000’s HDR performance is the colour striping I mentioned in the Setup section. When watching Ultra HD Blu-rays you can sometimes see quite marked striping in what should be smooth colour blends, with expanses of sky being particularly badly affected. 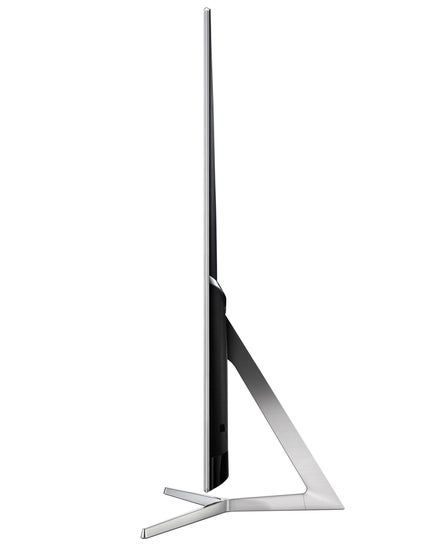 The UE49KS8000 is more consistently outstanding with standard dynamic range sources. Naturally they look less eye-catching and extreme, but their more limited colour and brightness fits within the screen’s capabilities so easily that the results often look immaculate. Even the light banding pretty much vanishes with SDR content.

Because of the flat screen, it’s immune to the issues with viewing angles and distorted on-screen reflections that are associated with Samsung’s curved TVs. And, frankly, I don’t really see any potential benefits of a curved screen on a TV as small as 49 inches.

The UE49KS8000’s stunning visuals are joined by a robust audio performance too. High volume levels can be achieved without distortion or screen rattling. Voices sound well rounded and clear, even against rowdy backdrops. Busy film soundtracks sound detailed and lively, yet the detailing is delivered without much accompanying treble harshness.

As usual, bass would ideally be more potent. Overall, though, the UE49KS8000 sounds better than its svelte chassis would lead you to expect.

If you’re likely to be gaming on the UE49KS8000, there’s more good news. Tests of the TV’s input lag deliver an average figure of 25ms – an outstanding result for a UHD TV.

If money’s no object and you can live with a substantially larger screen, you should look at buying one of Samsung’s KS9500 TVs instead, as these deliver a superior contrast and colour performance that’s pretty much the state of the art.

If you’re a sucker for beautifully deep, even, natural black colours then you could consider LG’s OLED55B6 OLED TV. While these are unbeatable at delivering the dark end of the HDR story, though, they don’t look as bright as the UE49KS8000, and suffer a loss of detail in the brightest HDR areas. 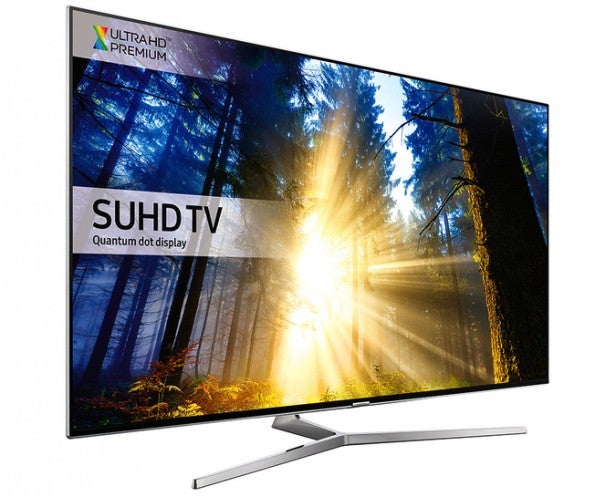 Another alternative might be the Panasonic DX902 series, which also delivers exceptionally contrast-rich pictures, albeit at the expense of some aggressive light blooming around bright HDR objects.

All these alternatives cost substantially more than the UE49KS8000, though. It’s hard to think of any rival set at the same sort of price that could deliver a better all-round performance. Probably the only other high-quality rival at the same price is the Panasonic TX-50DX802. The Panny doesn’t deliver as much brightness or colour range for its HDR playback, but its subtlety and naturalism are outstanding, its easel-style design is striking, and its included speaker bar sounds awesome.

Though familiar backlight clouding issues with HDR stop the UE49KS8000 from earning an unreserved recommendation, it’s in a class of its own at its price point when it comes to delivering on the promise of today’s HDR and UHD content.