Viewed as a lifestyle soundbar rather than one for Atmos/DTS:X soundtracks and the HW-S60T is a solid performer. It offers style and convenience and produces clear sound quality, but it’s not the most dynamic of presentations.

The Samsung HW-S60T is a 4.0ch lifestyle soundbar with built-in Alexa functionality.

We’ve been entertained by many Samsung soundbars in the past few years, but the HW-S60T marks a different direction for the South Korean tech giant.

The S60T is not armed with the bells and whistles of the premium HW-Q800T soundbar. It doesn’t support Atmos or eARC, and it gives Samsung’s Q-Symphony audio tech a swerve, too.

Instead, the Samsung HW-S60T announces itself as a lifestyle soundbar, wading into the Sonos Beam’s territory. It’s priced similarly and aimed at the less AV discerning, those who aren’t looking for – or don’t need – the shock and awe of object surround sound.

In fact, put your feet up and pour yourself a cuppa, as the HW-S60T is as much about style and convenience as it is about sound.

The Samsung HW-S60T is unlike the company’s functional and angular looking soundbars. More graceful in its appearance, the S60T is wrapped in the Kvadrat fabric that’s become the designer chic for audio products. It has an oval-shaped build, rounded edges and there’s a hexagonal mesh styling that covers either end. 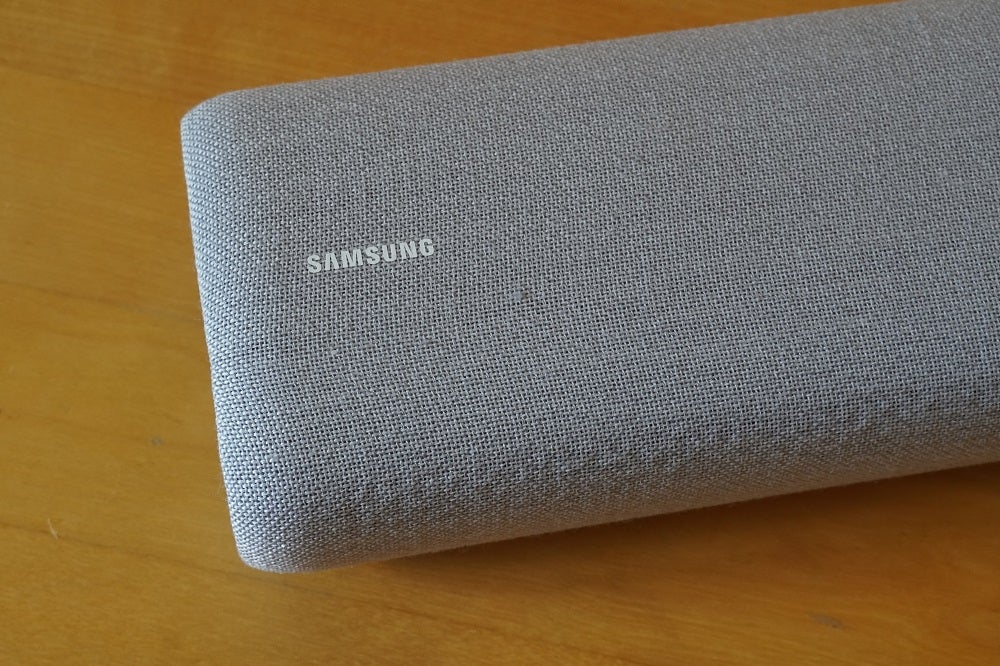 It’s compact (H68 x W764 x D125, mm) and sturdy (2.9kg), which adds to its premium, well-built feel. I suspect this is a soundbar that’s perfectly happy to sit on its own rather than beneath a TV. Wherever you place it though, you’ll want to give it a bit of space.

And that’s because the sides need to be kept free of clutter. The S60T features six speakers, which includes a wide range tweeter and built-in woofer alongside dual-sided horn speakers that disperse audio to the sides. Block the sides and you’ll affect the S60T’s spread of sound.

Positioned on the top surface is a multi-function button, alongside toggles for volume and muting the built-in microphone. Hidden beneath the Kvadrat cloth is a KITT from Knight Rider-esque display and an LED light system that flashes whenever you power the bar on/off, fiddle with the volume or ask Alexa. It does bring up a couple of issues though. In keeping its seamless design, it can be tricky so see the ‘display’ from a seating position, the oval shape of the speaker not helping matters either. 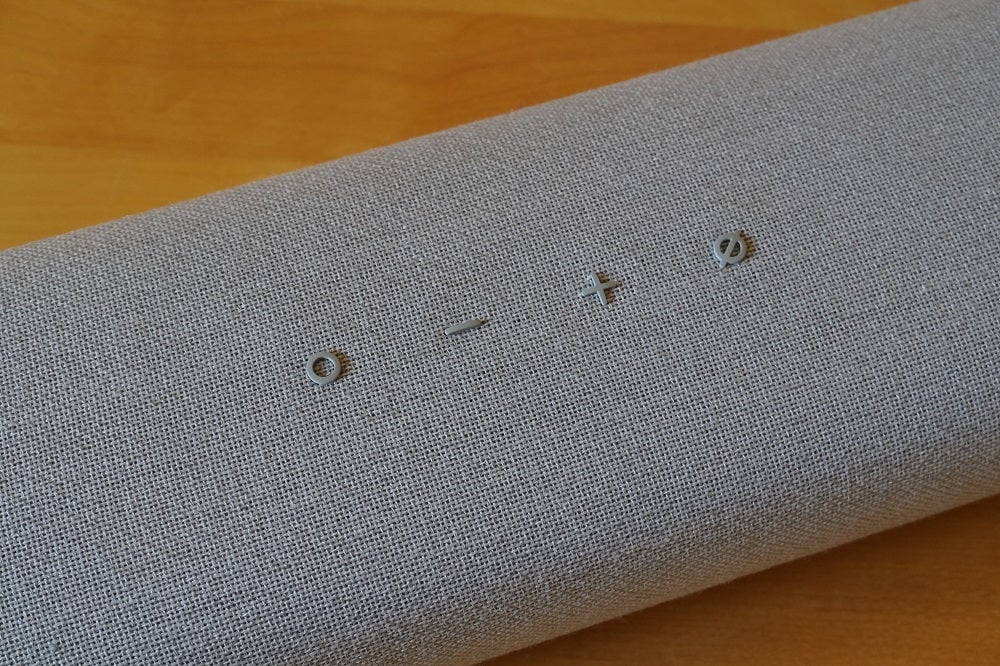 The second issue is that while the various bright LED colours (white, cyan, green, blue, red) help in terms of identification, as with every LED-based system you’ll need to consult the manual if you’re unfamiliar with what they mean. They’re not deal-breakers, but it does allow room for confusion to inveigle its way between the soundbar and the listener.

The Samsung HW-S60T comes in two colours: a standard black finish and a more fetching grey/silver version known as the S61T. You also get a slim Fire TV-esque remote in-keeping with the soundbar’s modernist approach. But I’d wager you’ll be interfacing with the soundbar via less traditional means in the SmartThings app.

The SmartThings app opens the Samsung HW-S60T’s feature set a bit further than the standard remote. The app can be used to connect the S60T to the Wi-Fi network and from within the app there’s control over volume, EQ settings, sound modes, as well as sending the soundbar into Bluetooth pairing mode for connection to other devices.

SmartThings is tremendously easy to get to grips with – the interface is uncluttered, responsive, simple to use. If you have other smart devices (Philips Hue, Ring, etc), they can be controlled through the app, too. 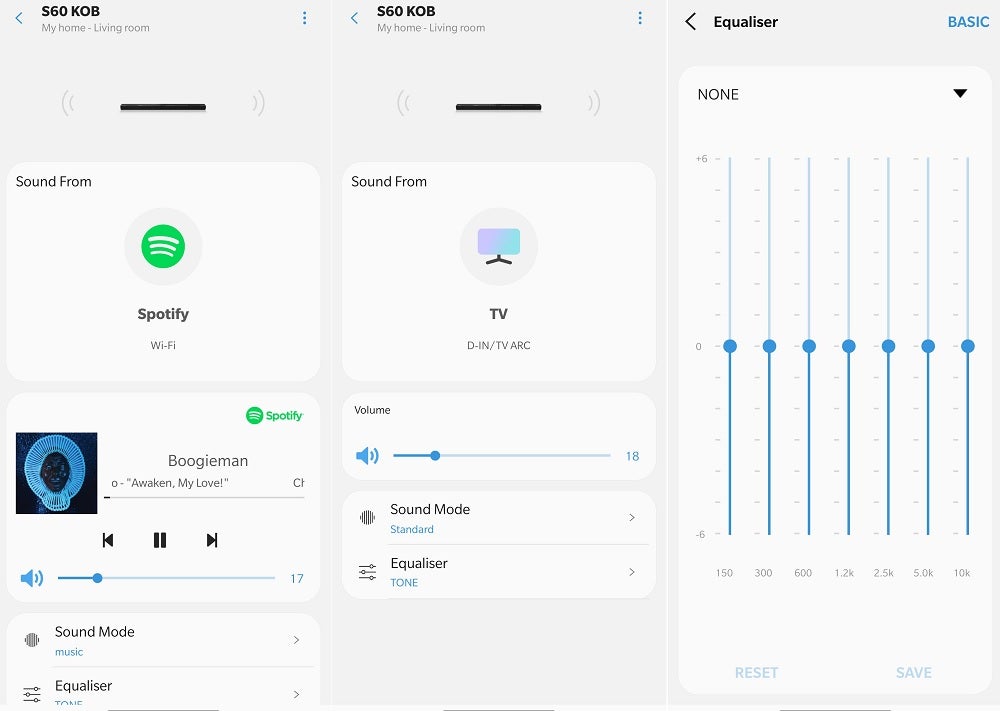 Connection is possible to Spotify along with Deezer and TuneIn, so you can fling your music streaming library to the S60T. Alexa voice control is supported and she’s very responsive to your beck and call. She’s also very loud – notification sounds seem to erupt from the soundbar. Bixby, Samsung’s own voice assistant, is not supported. 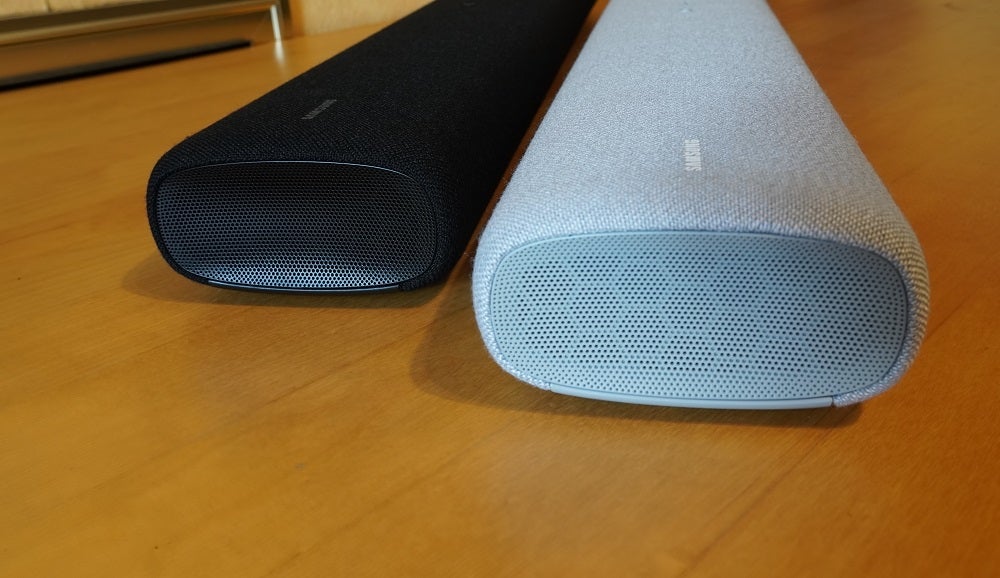 You can expand the soundbar’s horizons further by adding the compatible SWA-W500 wireless subwoofer and the SWA-8500S wireless rear speakers. However, the rear speakers are tricky to find. They’re listed as not for sale on the Samsung website, and availability elsewhere seems slim. 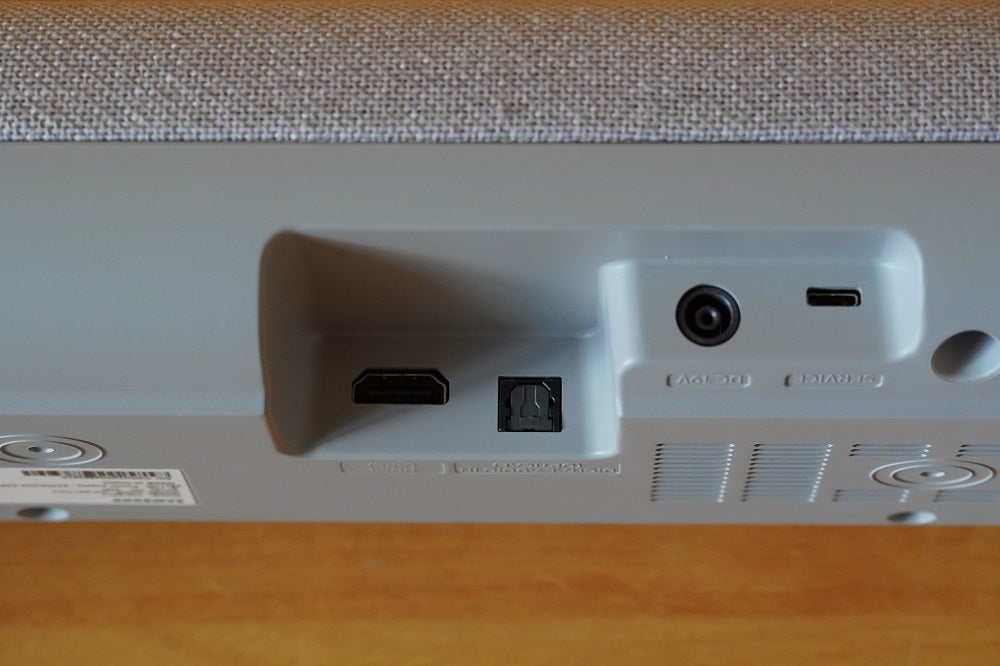 Connections are few – HDMI ARC and optical inputs – and housed in a recessed area on the unit’s underside. HDMI CEC control is also possible, and file support covers AAC, MP3, FLAC, OGG, WAV, ALAC and AIFF, with a wireless Bluetooth connection also possible (SBC codec) to another device or TV. With no USB connections, there’s of course no USB playback.

Samsung has also included wall brackets and necessary screws, as well as an HDMI cable.

With no support for Atmos, DTS:X, Q Symphony or 4K HDR passthrough, the Samsung HW-S60T isn’t built for handling the latest Hollywood blockbusters.

That notion is further reaffirmed by the opening action scene from Terminator: Dark Fate on 4K Blu-ray. The ‘enhanced’ Grace fends off the Rev-9 in a highway chase sequence, and the HW-S60T doesn’t have a good grip on the scene’s intensity: the crushing of metal as cars are punched out the way by the Rev-9’s dump truck is rendered in a rather polite manner, the scene losing energy and impact. 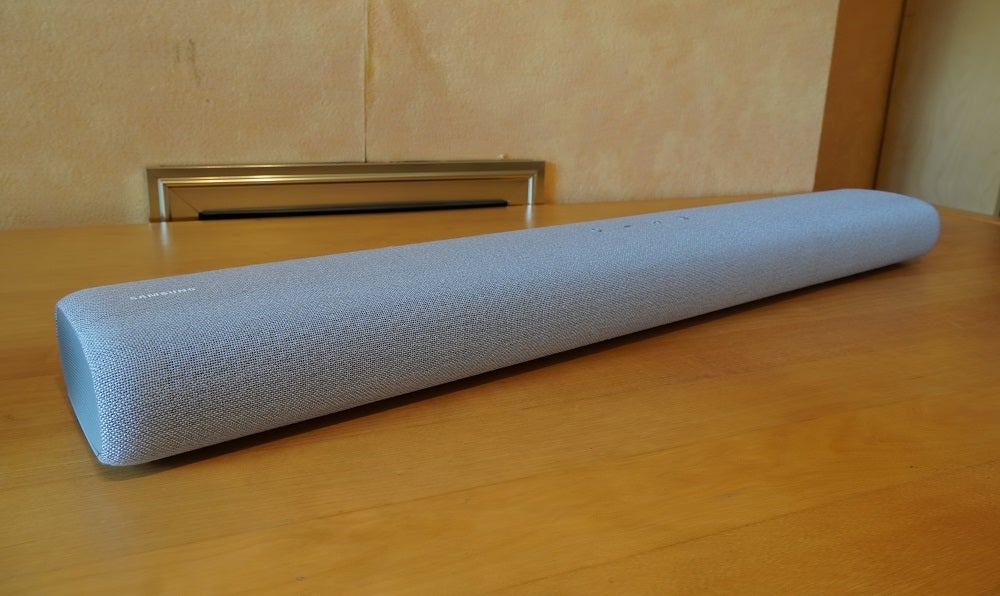 A watch of the less intense Yesterday by Danny Boyle and the soundbar’s characteristics become more evident. The soundstage is broad – not hugely expansive by any means – but wide enough as the sound is fired to the side.

Yesterday seems like a good opportunity to try out the Adaptive Sound functionality, and it optimises content scene-by-scene, and it appears to amplify background sound as well as making the soundfield taller and wider. As it’s variable, the audio won’t be the same in each scene, and in some cases there’ll be no discernible difference between it and Standard mode. 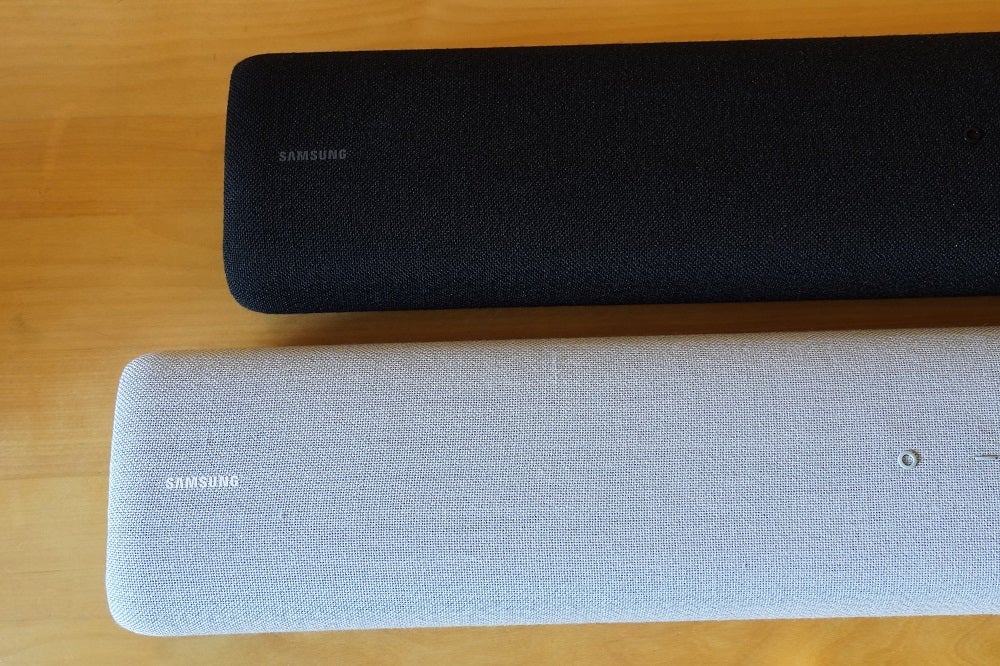 The effect it does have is that, while covers of The Beatles’ songs sound bigger, the presentation also sounds less firm. There were moments in Yesterday – the aftermath of the climatic scene at Wembley Stadium – where switching on Adaptive Sound dug up effects from the background and brought them forward – effects meant to add to the scene’s ambience, but not necessarily be paid attention to.

That said Adaptive Sound has its uses, and with it or without it the HW-S60T is an improvement over a flatscreen’s performance, centring and focusing the sound. Broadcast TV fares well and shows like The Good Place, which predominantly rely on dialogue, are graced with good clarity despite the lack of a dedicated centre speaker, with voices amplified and matching the action on-screen.

Bass is also decent for a one-box system – certainly a step up over the LG SNC7Y – and while the slightly warm tone is appealing, it’s not a hugely dynamic or weighty presentation. 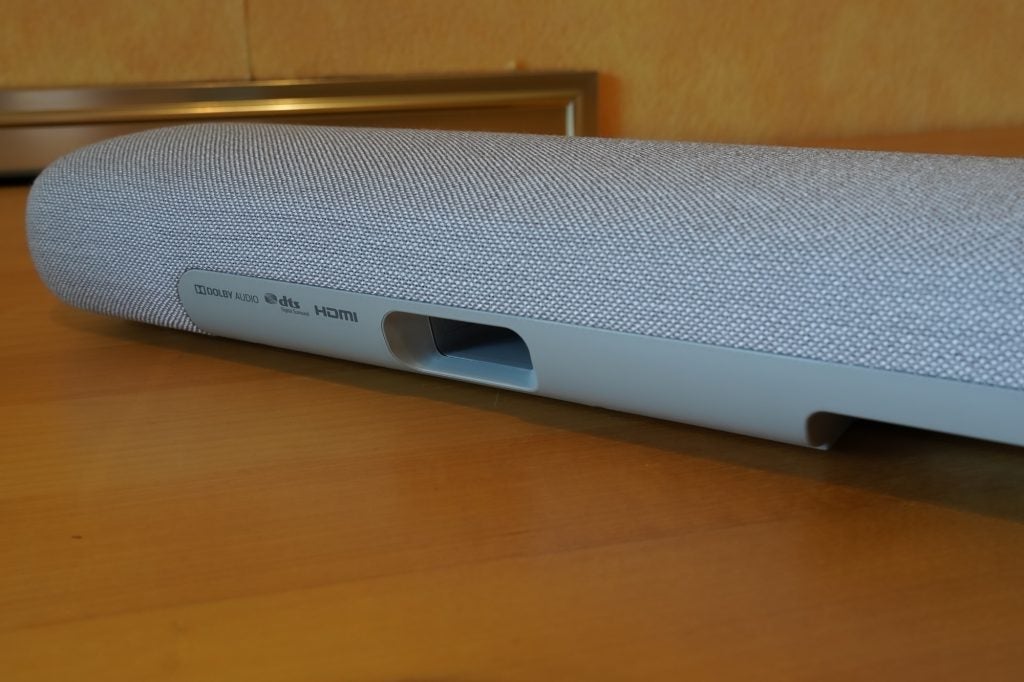 A try of some music content in the A Star is Born 4K Blu-ray and the opening Black Eyes song has a nice confident tone. Separation of the various elements in the scene – the drums, guitars, vocals and crowd noise – is distinct and clear as the HW-S60T’s soundstage avoids feeling cramped.

Put the soundbar in Music mode and stream tunes over Spotify, and it delivers in terms of clarity, timing and detail. It’s a likeable character, and Caravan from the Whiplash soundtrack is cleanly reproduced with plenty of zip, pace and enjoyable low-end frequencies. It’s a more engaging listen than the Sony HT-G700, though in general the HW-S60T does feel a little exposed dynamically.

You should buy the Samsung HW-S60T if…

Viewed for what it is – a lifestyle soundbar for the more casual market – and it’s a solid effort, offering good dialogue reproduction, decent scale with Adaptive Sound and engaging music performance.

The HW-S60T is configured to fit into smaller spaces, but if more space arises then there’s an upgrade with the addition of a subwoofer and surround speakers.

You shouldn’t buy the Samsung HW-S60T if…

The HW-S60T isn’t designed to go toe-to-toe with the latest Atmos/DTS:X movies or soundbars, which may disappoint some considering its price tag.

The obvious challenger is the Sonos Beam, which excels with both movies and music and sits within Sonos’ multi-room system. The HW-S60T isn’t as talented.