What is the Samsung Gear 2?

The Samsung Gear 2 is Samsung’s second attempt at tackling the smartwatch space after last year’s dismal showing with the Samsung Galaxy Gear. It’s slimmer, lighter and more refined than its predecessor, irons out a number of shortcomings and adds new features such as an inbuilt heart rate sensor.

Interestingly, despite the first of Google’s Android Wear watches being due this year, the Gear 2 has dropped Android in favour of Samsung’s Tizen OS. This is why the Gear isn’t ‘Galaxy’ branded, though despite these changes the Gear 2 – and its cheaper, plastic bodied sibling, the Samsung Gear 2 Neo – offer a largely similar experience to the original Gear.

There’s little doubt that the Gear 2 is a big improvement on the original, but like the Gear Fit it still feels far from the finished article. 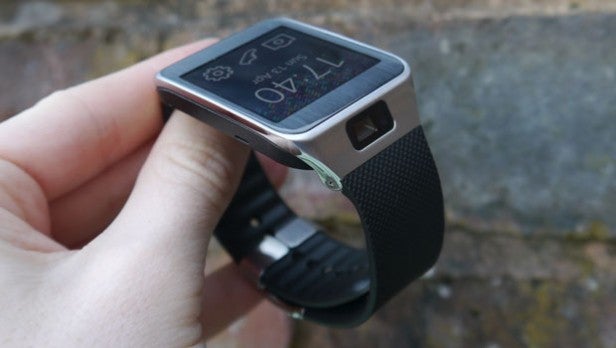 Last year’s Galaxy Gear was particularly easy on the eye and we are pleased to say the Samsung Gear 2 is even more elegant. Moving the integrated camera from the strap to the body’s upper edge helps reduce some of the watch’s bulk. Elsewhere, the removal of four unsightly rivets from the watch’s face gives it a sleeker, more refined appearance.

Another important change to the Gear 2 is the relocation of the physical home button to the face, as opposed to the edge as on the Galaxy Gear. The compact, square control makes the watch easier to navigate, helping create a simpler, more intuitive user experience.

Although the provided plastic wrist strap is rather uninspiring, it’s comfortable to wear and unlike the Galaxy Gear you can change the strap on the Gear 2. Currently available in black, brown and orange, we expect Samsung to offer a range of additional strap options in the near future.

Overall, then, the Gear 2’s design makes a positive first impression. Indeed, we wish the likes of the Samsung Galaxy S5 could impress us so much with their design.

This outward beauty does come with some caveats, however. After just a week, the Gear 2’s metal buckle is already heavily scratched. This is mainly due to the clasp rubbing against the desk when working at a keyboard, and though it’s not a disaster it’s the kind of issue that will only grow worse with time and continued use. 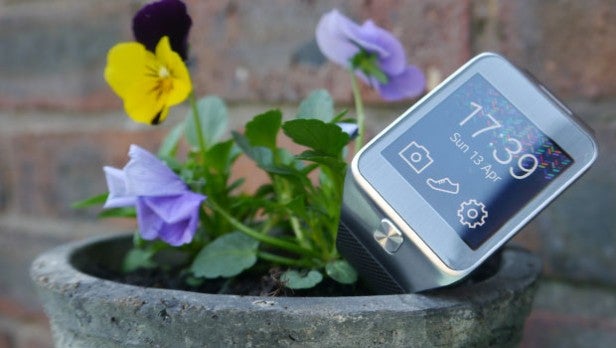 Visually, it is hard to fault the second-gen Gear. The watch’s screen is sharp enough to comfortably read text notifications and bright enough to make viewing in direct sunlight clear and defined. Like its predecessor, the Gear 2 has a 1.63-inch Super AMOLED display with a 320 x 320 pixel resolution. Samsung has the best screens on any of the wearables we have seen so far.

However, despite featuring a significantly better resolution than the 220 x 176 pixel Sony SmartWatch 2, the Gear 2’s screen lacks the contrast and colour quality to do photos justice.

Although small in stature, the screen supports a range of touch controls. The touch interface is easy to navigate with such a responsive panel and pinch to zoom in the gallery helps make image viewing possible on such a compact display.

Unfortunately, as with every aspect of the Gear 2, the watch’s screen is not without its own niggles.

The sensitivity of the auto screen-on sensor needs some work .Yes, the display automatically wakes when you lift your wrist to check the time – a handy addition – but it also wakes when typing, walking or basically when you move your wrist in any way.

Having your wrist constantly light up is an irritation, but the troubles run deeper. Unwanted waking of the screen while walking meant the sleeve of our jacket inadvertently activated the camera on more than one occasion. This constant waking is also bad for the battery life.

Next
Features, Performance and Camera Review