Before we get into the Samsung Gear 2’s full features list, there is a major issue we must first address. Like the Galaxy Gear before it, the Gear 2 is only compatible with Samsung branded devices – and just a select few at that.

Samsung’s wearables would be a good deal more appealing if they worked with more devices, particularly non-Samsung ones.

But now to the positives. The Samsung Gear 2 is far sleeker than the original Galaxy Gear. The new dual-core processor speeds things up and helps cut lag when skipping through menus or launching applications.

Although we can live happily without the watch’s call and messaging options, as a media controller, the device has its merits. Being able to control your smartphone’s music player direct from your wrist quickly becomes an addictive feature, with its simplicity promoting continued use. Thanks to an inbuilt IR receiver the watch can also be used to control your TV, though is more of a nice to have than a must-have like the music control.

‘Find my phone’ is another handy feature for those prone to mislaying their possessions — press ‘Find my phone’ on the watch and your phone will ring, it works the other way, too, so you can use your phone to find the watch. The range of the Bluetooth 4.0 connection means the smartwatch remains within range anywhere within a moderately sized two-story home. This works the other way too if you’re struggling to remember where you removed the watch. 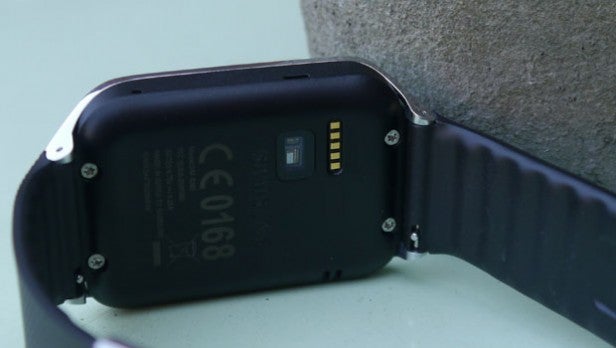 Sadly, though, the list of negatives is a far lengthier one.

Like its Samsung Gear Fit and Samsung Galaxy S5 siblings, the Gear 2 features an integrated heart rate sensor to provide more detailed health monitoring than just the standard pedometer and accelerometer offerings. Unfortunately, we are not convinced by the Gear 2’s sensor.

Located on the watch’s rear, the heart rate sensor felt an unnecessary addition which, for the masses, is not that useful or even reliable. On the rare occasion the Gear 2’s sensor gave a reading on first attempt, its results were consistently four to eight points higher than both the Gear Fit and Gear 2 Neo, tested simultaneously, and we’ve already verified the Gear Fit’s readings to be less accurate than we’d like. 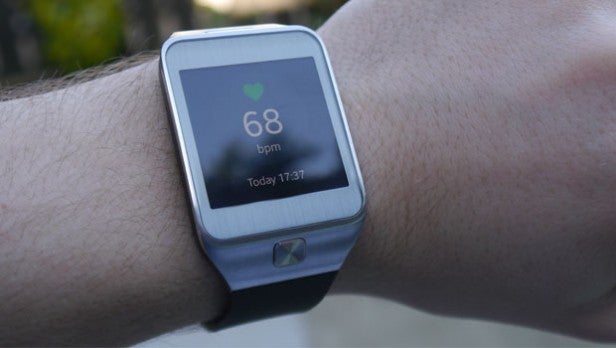 As with the Galaxy Gear, the Gear 2 is also meant to be used to make and receive calls, but we can’t recommend that you do so.  There are a few serious issues, not least the weirdness of talking to your wrist in public and the fact it’s not really more convenient than using your phone.

Due to their placement on the watch’s rear edge, the Gear 2’s inbuilt speaker and microphone are both prone to obstruction. This means you have to contort your wrist, crisp audio is out of the question. What’s more, taking calls through the watch means anyone in close proximity can hear your full conversation, in which case you may as well use the speakerphone feature of your actual phone.

Message notifications are only marginally better on the Gear 2, too. While the ability to read messages direct from the wrist is a handy addition, responding is a joke. The selection of template responses is hardly ideal for real world situations.

The ‘How’s it going?’, ‘What’s up’ and ‘I’ll talk to you soon’ responses feel extremely forced, but then a miniaturised QWERTY keyboard on the display would be just as bad. What the Gear 2 really needs is voice dictation, but there’s no option for this.

At times the Samsung Gear 2 reeks of functionality being included for its own sake, with little thought of application. And that’s before we’ve addressed the watch’s inbuilt camera. 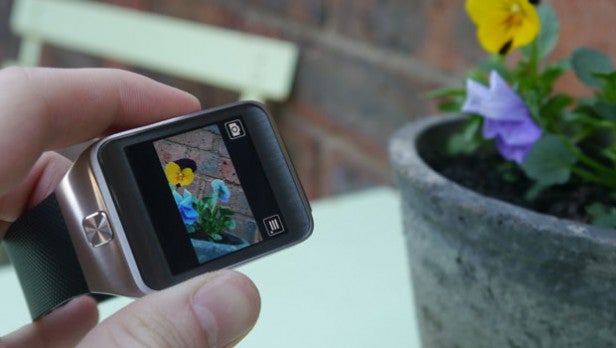 The Samsung Gear 2’s camera is a peculiar inclusion. The camera might have moved off the strap, but it remains awkward to use and lacks the levels of quality that would make its inclusion worthwhile.

Updated from a 1.9-megapixel offering to a new 2-megapixel sensor, the Gear 2’s camera is satisfactory at best; it produces results similar to a mid-range smartphone’s forward-facing camera, with shots that lack sharpness and the general quality that would justify regular use. 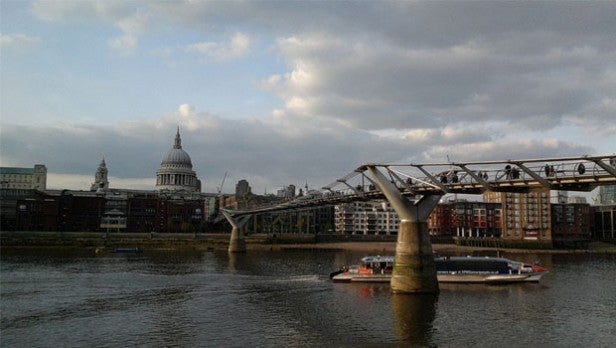 Despite the new positioning on the watch’s upper edge, the camera is still awkward to use. Lining up a shot and viewing the screen at the same time requires serious contorting of the wrist. At no point does this feel a natural process that will replace simply pulling your phone out of your pocket to capture a shot.

If the thought of someone watching you carefully bend your wrist into odd shapes in order to take a picture with a watch wasn’t deterrent enough, the Gear 2’s camera has another embarrassment inducing issue. The shutter noise that accompanies every snap is ridiculously loud and be turned off.  It’s enough to put you off using at all. 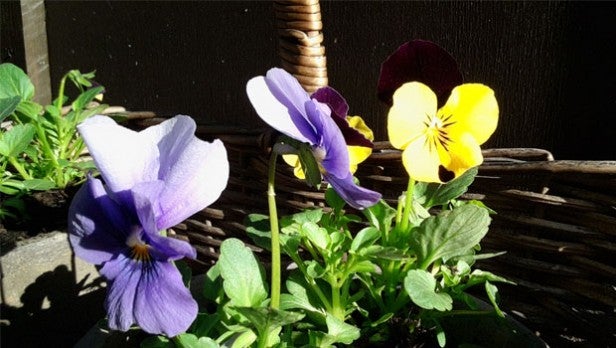 You can use voice commands to take a photo, too, but sadly these are not always the most reliable. Saying ‘cheese’ or ‘smile’ might trigger the shutter five times out of ten. Shouting the commands improves the success rate slightly.

When scaled to a larger screen, camera captured images show their lack of detail and clarity and again begs the question of the camera’s inclusion. If Samsung is going to insist on fitting its smartwatches with a camera, we can’t help but feel a user-facing selfie camera would be a better choice.