This is by far the most accomplished high-end Android tablet I have ever used, with the finest display you’ll find on any mobile device.

The Samsung Galaxy Tab S7 Plus is the best Android tablet to come out in quite some time, and a match in many areas for the excellent iPad Pro 2020.

Samsung has put everything into making this the best tablet going. It’s got a high-resolution 120Hz display, an S Pen stylus in the box and the same Snapdragon 865 Plus chipset you’ll find in some versions of the Galaxy Note 20 Ultra.

This is a true flagship tablet, the likes of which Samsung hasn’t released in a long time.

There’s a regular Tab S7 available too for £619. This has a smaller LCD but many of the same features as the larger model.

Sorry, iPad Pro – but there’s a new tablet king on the scene when it comes to displays. The Galaxy Tab S7 Plus has the single best screen I have used on a mobile device and it ticks all the boxes.

OLED? Check, 120Hz? Check, super high-res? Check. And unlike on Samsung’s recent phones, you can utilise both the high 2800 x 1752 resolution and that faster refresh rate at the same time, giving you both detail and smoothness. You’ve even got an in-display fingerprint sensor that works fine for unlocking and authorising payments.

This Plus model has a 12.4-inch 16:10 panel and it’s smaller and wider than the iPad Pro 12.9-inch, making it ideal for movies. There’s a regular Tab S7 too, with an 11-inch display, although this swaps OLED for LCD and a bit of sheen gets lost in the process. 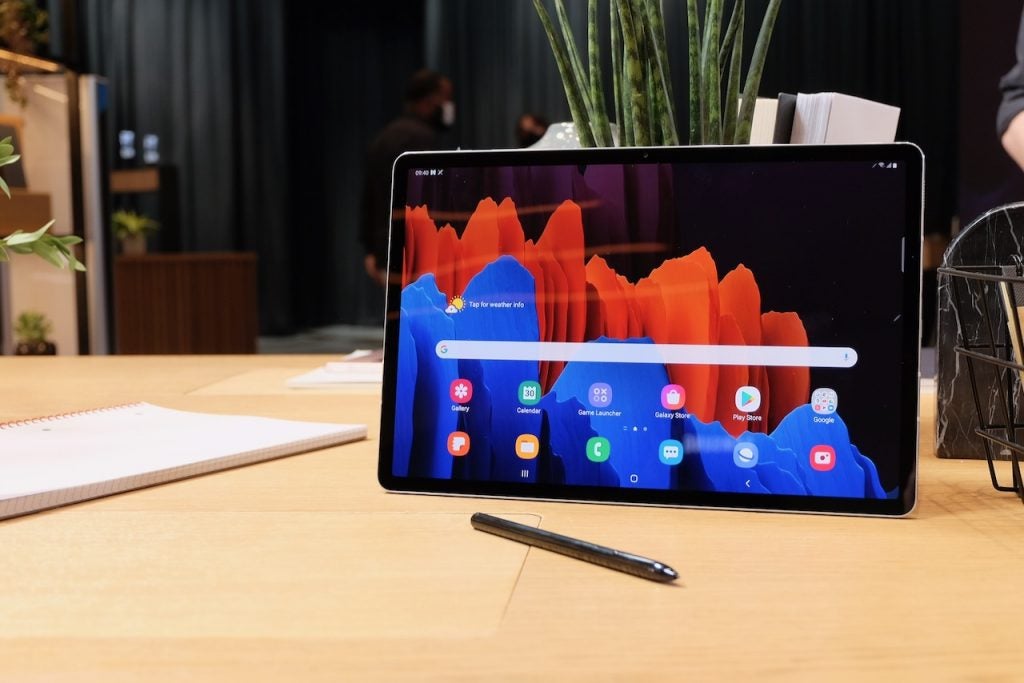 I’ve been using the Tab S7 Plus over the past few weeks and the display shines in a number of areas. The OLED panel and high brightness make it fantastic for watching HDR content from the likes of Netflix, and the faster 120Hz screen enables the S Pen latency to be a mere 9ms.

Scribbling down notes and drawing is so much more responsive than on previous Tabs, with your etchings appearing almost instantly on the screen. It’s also great to see Samsung still including the S Pen in the package, meaning you don’t need to shell out extra to feel like you’re getting the full experience.

When not in use, the chunky S Pen can be attached to both the side (like the iPad Pro) and on a distinctive magnetic strip below the dual camera array on the back. Oddly, the pen won’t charge on side and you’ll need to attach it to the back to juice it up.

While I initially thought charging the S Pen on the back was an odd choice, it actually works fine in practice and it props the tablet up a little when it’s attached. Along with the tablet, Samsung is selling a neat keyboard folio that has a handy kickstand and little magnetic flap to keep the S Pen protected. Like the Magic Keyboard for the iPad, this also has a touchpad and a generally very nice typing experience.

The Galaxy Tab S7 Plus is a large tablet, but it’s still suitably slim (5.7mm) and light (575g) and slides easily into a bag. It’s good looking too, with flat sides, a matte back and only a small bezel around the display.

Situated around the Tab S7 Plus you’ve got four speakers (one in each corner) that pump out excellent audio, alongside a USB-C 3.2 port for charging and data transfer, and a small set of pins to easily connect the keyboard. There’s no headphone jack.

Inside the Samsung Galaxy Tab S7 Plus you’ll find a Snapdragon 865+ chipset, the same chipset used in many of the best phones and best Android phones.

. Unlike with the Note 20 series, this is the sole chip used across all regions and us Brits haven’t got an Exynos variation to deal with. That’s good news and this Plus variant of the 865 adds in a little grunt in the graphics department. You’ll find 6 or 8GB RAM and up to 512GB of UFS 3.0 storage. Samsung has also kept around the microSD slot, so you can save a bit of money initially and still add more storage down the line.

It likely comes as no surprise that this is a seriously fast device. It can’t quite beat the iPad Pro 2020 in Geekbench tests, but in use it feels as smooth and responsive as Apple’s flagship device. The 120hz display only adds to that feeling of speed, giving swipes and scrolls an extra bit of sheen.

There’s enough power here for games to be played on their highest graphical settings and there are more titles taking advantage of the faster refresh rate. You’ll need this grunt when they start to become more common. Samsung is touting the game streaming power of this tablet too, thanks to a partnership with Microsoft and the Game Pass Ultimate (formerly xCloud) service. If you’re a subscriber, you’ll get access to more than 100 games that are streamed to the tablet, rather than downloaded.

The performance will vary wildly depending on the signal strength, but I was able to get good frame rates streaming Forza over a 50Mbps Wi-Fi connection. This works over 5G too if you plump for the £999 cellular flavour.

With an Xbox One controller paired, this is an ace mobile gaming solution that will hopefully only improve as more games are added and the service gets more robust.

One design tweak I’ve really appreciated during my time with the Tab S7 Plus is the placement of the 8MP front camera. Instead of assuming you’ll be using the tablet vertically, the camera here is placed centrally so you’re looking directly at it when the Tab S7 Plus is propped up on its keyboard case. This leads to far better angles of your face when you’re on a Zoom call. The quality of the camera is great too, with nice facial tones and even pretty good low-light performance. It’s far better than the camera on your laptop, that’s for sure.

There are another two cameras on the back: a 13MP main and 5MP ultra wide. They’re both fine in general and good for a tablet. Snaps of documents you want to sign come out very crisp and clear, and the ultra wide is good for taking a photo of a room for example. If you’re big into tablet photography, this will serve you well, but you’ll likely get far better snaps from your phone. 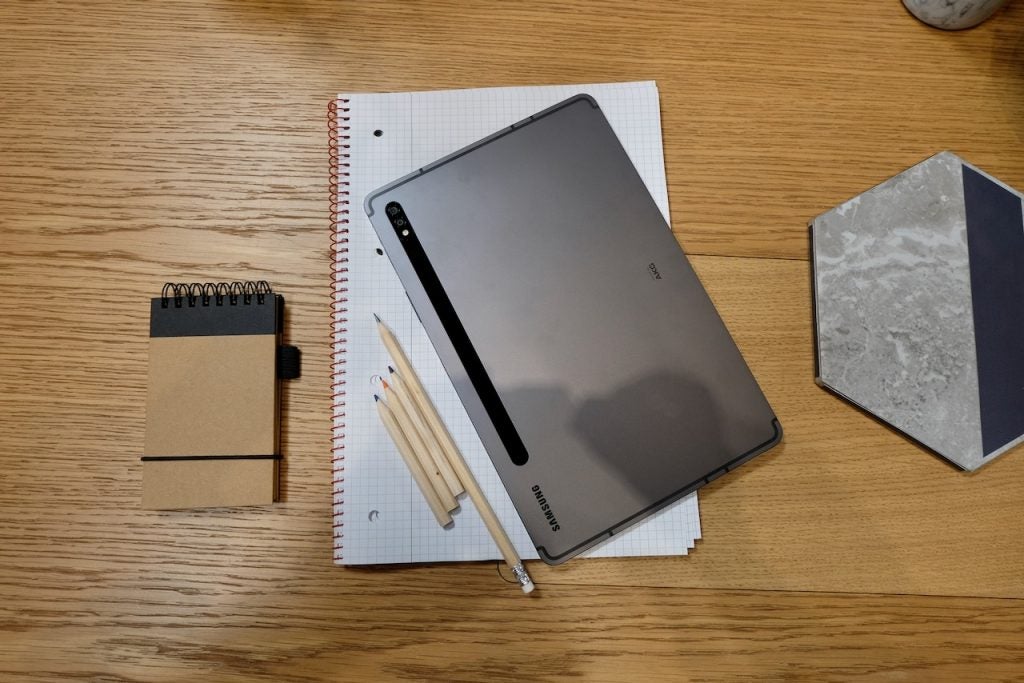 Android tablets have long been hamstrung by the fairly poor selection of properly optimised apps, especially when compared to the App Store on iOS. I won’t dwell on this too much as it’s a problem that likely won’t be going away anytime soon. If you want a tablet with the very best apps available then I would always recommend an iPad.

Still, Samsung has done a surprisingly good job at making the Tab S7 Plus a pleasure to use both casually and for actually getting things done.

The DeX UI, for example, switches up the usual Android launcher for something far more akin to a computer desktop. The homescreen is far less cluttered, apps open in resizable windows and it really makes use of the large display. It’s not perfect though, as certain apps just don’t work in this form and others try to open in full screen. It feels like Samsung is doing its best, but it can only do so much.

There are a couple of preinstalled apps, like a bunch of Microsoft services and a couple of good apps that make use of the S Pen. Noteshelf is good for taking notes and Canva is usable for some basic design work. The real star is the updated Samsung Notes app, which now syncs with Office 365 and is a fully-featured notes app whether you’re typing or using the S Pen. 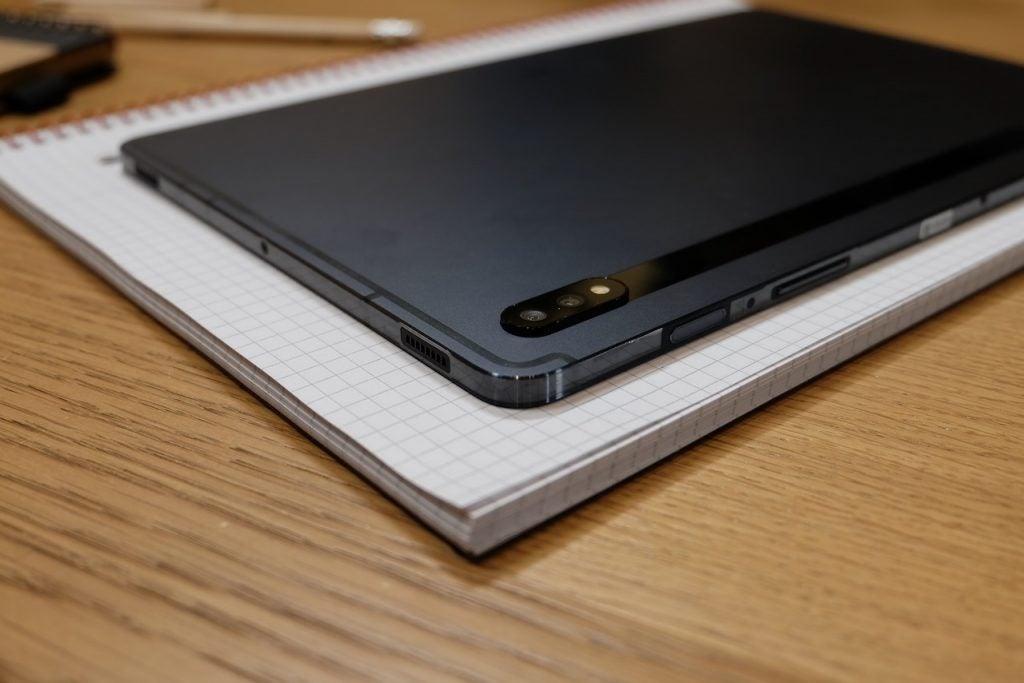 I’ve spent a few weeks with the Samsung Galaxy Tab S7 Plus as my primary tablet and for a number of days I used it as a replacement for my laptop, using it throughout a workday for Zoom calls, Google Docs typing and some lunchtime game streaming.

If you’re pushing the device hard, with the keyboard cover attached, you’ll still make it through the workday without issue. I went from 9am to 6pm with a good 20% left after for some evening Netflix watching.

A more casual user will likely only need to charge the slate every few days and I managed to go three days between charges when I used it for the occasional bout of YouTube, Netflix and email replying.

There’s a large 10,090mAh battery inside and the 120Hz display adaptively switches refresh rate down to as low as 1Hz to stretch the endurance out. 45w charging is supported too, giving you a full charge in around 2 hours.

It would be nice to see the handy wireless reverse charge feature utilised here as Huawei did with its MatePad Pro. Dropping down the Buds Live or Galaxy Watch 3, and having them charge on the tablet’s back makes so much sense.

Should you buy the Samsung Galaxy Tab S7 Plus?

This is by far the most accomplished high-end Android tablet I have ever used, with the finest display you’ll find on any mobile device.

It’s expensive (£799 and £999 for 5G) but these devices are pricey and this still undercuts the high-end iPad Pro.

It’s fast, comes bundled with the S Pen and does a decent job at making Android somewhat workable on a big display. If you want to go all-in on an Android tablet then this should be the one.