It’s a fantastic tablet that suffers a lot due to the lack of Google services and everything that comes with that.

Some might dismiss the Huawei MatePad Pro as a simple iPad Pro clone. Look a bit deeper, though, and you’ll find the most exciting Android tablet released in a long time.

But, of course, as with any current Huawei Android device, there’s a huge elephant in the room: you won’t find Google services like Gmail, YouTube and Play Store on it.

At a hardware level, the MatePad Pro is a winner, but as a complete package, the story is a little murkier.

It’s not hard to see where Huawei got the inspiration for the MatePad Pro – Apple’s iPad Pro. While it’s not entirely original, the iPad Pro is so well designed that by merely following that blueprint Huawei has crafted a tablet that looks great and is a pleasure to use.

It’s slightly narrower than the 11-inch iPad Pro owing to its slightly smaller and wider display yet it has similar curved sides, a pen (sold separately, though included in some bundles) that magnetically attaches to the top and a flat, metal back. It’s weighted very well: not too heavy to hold for extended reading, but with enough heft, to feel sturdy. It feels high-end and, as you’d expect from Huawei and is generally expertly designed.

There are a few unique material options, including a bright orange fake leather variety that adds a real hit of style. You won’t find that on the iPad. 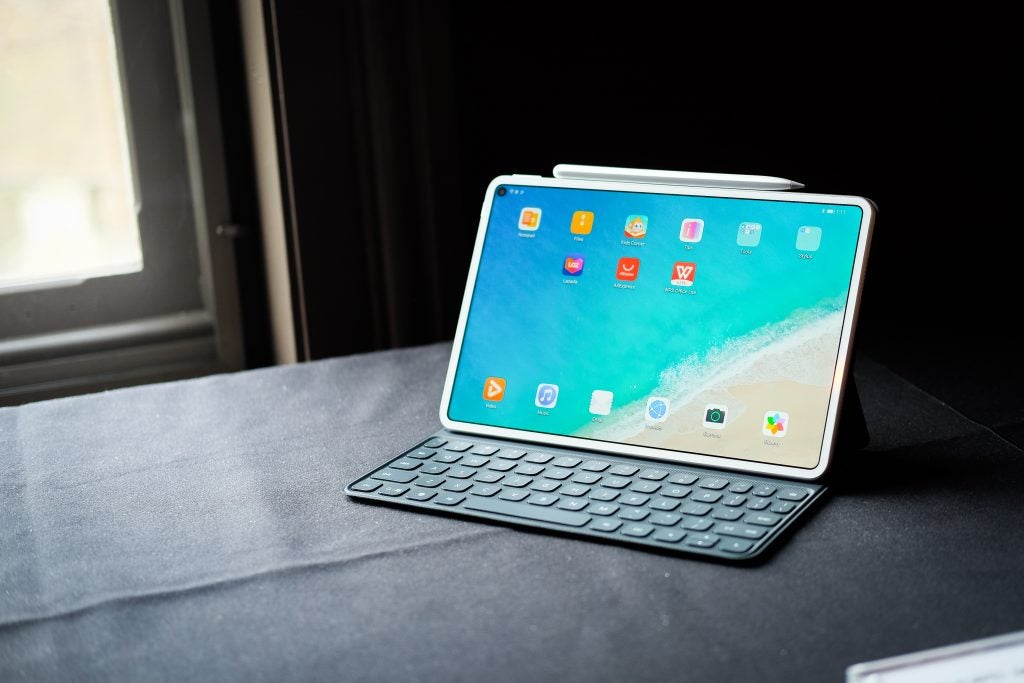 As is becoming more common with tablets, there’s no headphone jack and just a USB-C port on the bottom for charging and connecting headphones. Four speaker grilles are positioned on the top and bottom.

The 10-inch display takes up the majority of the tablet’s front, with just a minimal bezel giving your fingers somewhere to rest. This might not be the most practical design, but it gives you the biggest screen possible in this body size. Huawei’s palm rejection software is excellent, so you won’t find yourself accidentally pressing the display when you don’t mean to.

Instead of finding a way of fitting the front camera into the bezel, here it’s in the display. The cutout is an odd design choice I must say, and it does break up the otherwise impressive panel. I understand it on a phone, but here it doesn’t look right – especially as there seems to still be room on the bezel for it to go.

Covering the front of the MatePad Pro is a 10.8-inch LCD display. Even though it lacks new tech like a faster 90Hz refresh rate or the use of an OLED panel, it’s still a great display.

It displays a supremely sharp image thanks to the high 2560 x 1600 resolution, which is great for looking at photos or supported video. Colour reproduction is good and considering it is LCD rather than OLED black levels are nice and deep. It’s bright too, with Huawei’s claim of 540 nits of peak brightness sounding about right.

While the M Pencil (Huawei’s name for its stylus) isn’t included in all varieties of the tablet, it’s a handy add-on to pick up. Drawing and writing are both responsive and the pen charges by attaching it to the top. 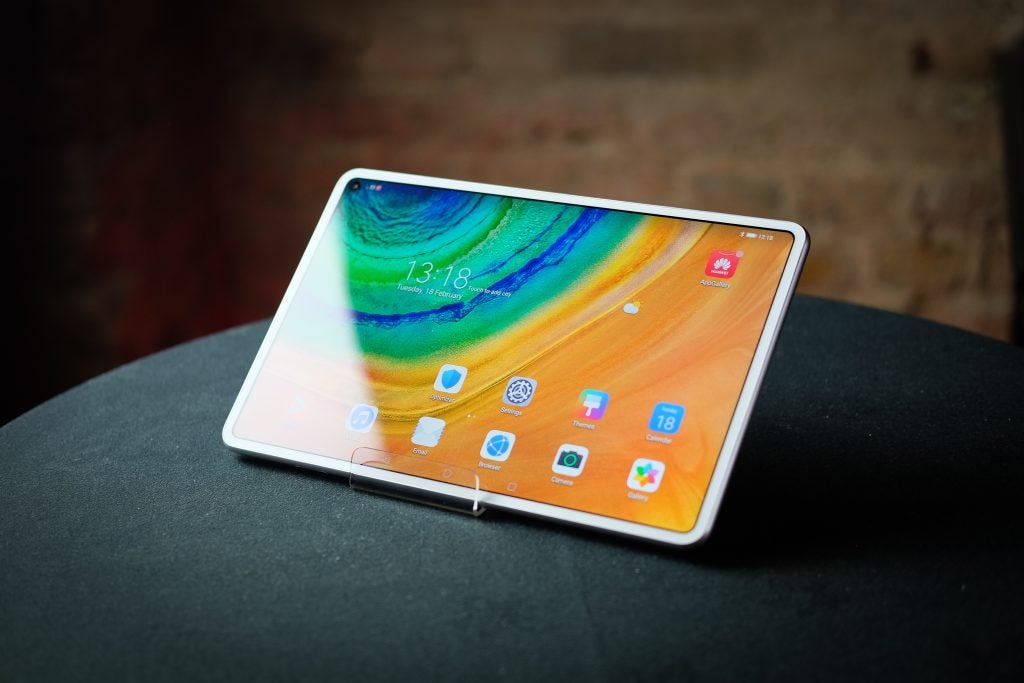 Performance and software – No Google, but high-end internals

If the MatePad Pro had access to Google Play Services, it would be my favourite Android tablet going. Without it, it feels hamstrung, even more so than Huawei’s recent duo of phones. You can’t, for example, install Netflix to watch something on the great screen and while you can install Disney Plus and Prime Video via APKs (or Huawei’s clever Phone Clone app), they lack support for HD and HDR streaming and downloading. I’ve got this supremely capable display, yet I can’t make proper use of it. At least YouTube is accessible via a browser.

Huawei’s alternative to Google Play is the App Gallery. It’s baron at the time of writing, with TikTok, Snapchat and The Times being the only real big apps available. I’m sure this will get better in time and I will certainly re-review this tablet when, and if, services like Netflix and Disney Plus see official releases.

There is limited support for apps that utilise the stylus too, with AutoDesk’s Sketchbook (a good app, I must add) being the only proper drawing utility I could find. Compare this to the load of excellent drawing and note-taking apps available on the iPad and the MatePad might be a hard sell if you’re looking for a creative tablet.

You’ll find a better selection of games available on App Gallery, and there’s plenty of power here to run something like Asphalt 9 smoothly. Powering the MatePad Pro is the same Kirin 990 chipset you’ll find in the new P40 range, along with 8GB RAM (a 6GB model is also available). It’s available in both 4G and 5G options too, the latter of which is still very rare on tablets.

Huawei’s EMUI is still built upon the groundwork of Android and there are some nice additions here to make apps more at home on the large display. There’s split-screen multitasking, and you can open apps in small windows that can be dragged around and expanded or minimised.

A strong tablet not only needs a good screen and fast internals but quality audio too. Thankfully the MatePad Pro impresses here with nice, crisp and loud sound from the Harmon Kardon ‘tuned’ speakers. The positioning on the sides does mean you block the speakers when you’re holding it horizontally, though.

A couple of other things to note: there’s no fingerprint scanner. Instead face unlock acts as the main method for securely getting into the tablet. There’s also a single camera on both the front and back, both of which are perfectly serviceable. The rear 13-megapixel sensor is good for scanning documents, though the phone in your pocket is likely a lot better for capturing your holiday snaps.

You won’t find a tablet with more battery-focussed features than the MatePad Pro. Not only does it have exceptionally fast charging via the included 40w plug (a full charge from 0-100% takes just over 90 minutes), it also adds in 15w wireless charging and the ability to charge other Qi-enabled devices on its back.

While reverse wireless charging is usually slow and awkward on a phone, it makes a lot more sense on a tablet. I can lay an iPhone 11 on the tablet, and it’ll charge up at 7.5w – very handy for those times you forget your charger.

Endurance here is good too, though it’s far from the longest-lasting tablet you’ll find. A day spent using a MatePad Pro as a replacement for my work laptop saw it last comfortably from 9-6 with 30% left – that’s with Wi-Fi connected but not 4G. 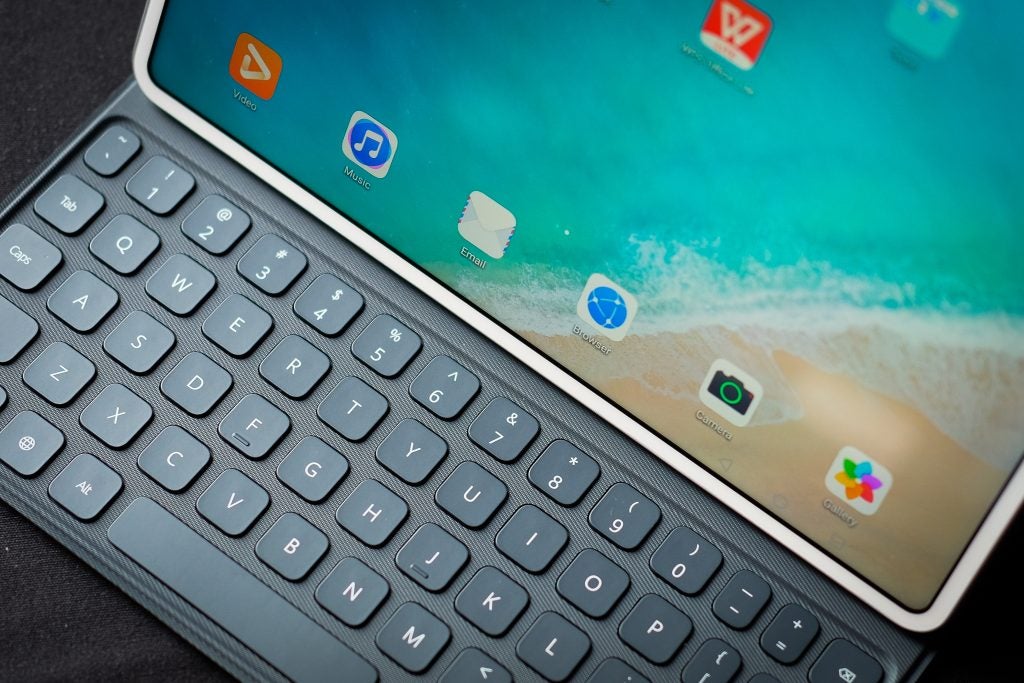 Should you buy the Huawei MatePad Pro?

In many ways, this is the best Android tablet I have ever used and up there with the best tablets. The iPad-like design is practical and slick; the display gorgeous and the internals supremely capable. Even the accessories are well made and worthy additions.

Yet, once again, it’s the software that stops the tablet being a great buy. Even though Huawei’s own tweaks are welcome and generally make phone apps easier to use, the lack of Google services and the DRM that comes with it leads to a media tablet with nothing to play on it.

While I can probably live without some of these things with Huawei’s latest P40 phones (the stunning cameras make up for a lot) it feels like it’s more of a sacrifice here. Until there is support for apps like Netflix, proper HD streaming in other areas and more apps to take advantage of the power the MatePad Pro isn’t for everyone.

It’s a fantastic tablet that suffers a lot due to the lack of Google services and everything that comes with that.

Can you get Google on Huawei?