It used to be fashionable to complain about Samsung’s TouchWiz design. Techie folk loved to whine about its childish icons, rubbish bloatware, weird sound effects and slightly sluggish performance. This is no longer the case, and the freshly re-branded Samsung Experience is a mature Android skin, bringing not a merely good experience to the table, but something that genuinely sets it apart from other Android phones.

There are far too many unique features to talk about here, but one that has to get a mention – mostly because it has a dedicated button – is Bixby. Mobiles editor Max Parker wasn’t impressed by Bixby in its first iteration, but since then Samsung’s personal assistant has learned to respond to commands in English.

I like the fact that Bixby only listens when you hold down the Bixby button. Commands such as ‘Open Facebook and write a new status that says “Best day ever”’ work perfectly, as do actions like opening the Settings app in the Display section, making a phone call and opening the camera. Google Assistant can do your camera and phone call task, but not the Facebook or Settings commands.

What’s clear is that there’s a long way to go. Bixby doesn’t hear the nuances of British English (it only supports US English) so often gets things wrong, especially names. It also insists on encouraging you to use it more by giving you ‘XP’, informing you how much you’ve earned in a pop-up with an on-screen animation which not only makes noise, but also takes over half the screen. To be honest, most of my Bixby usage so far has been accidental, normally when pulling my phone out of pocket. It’s nowhere near ready for the prime time. 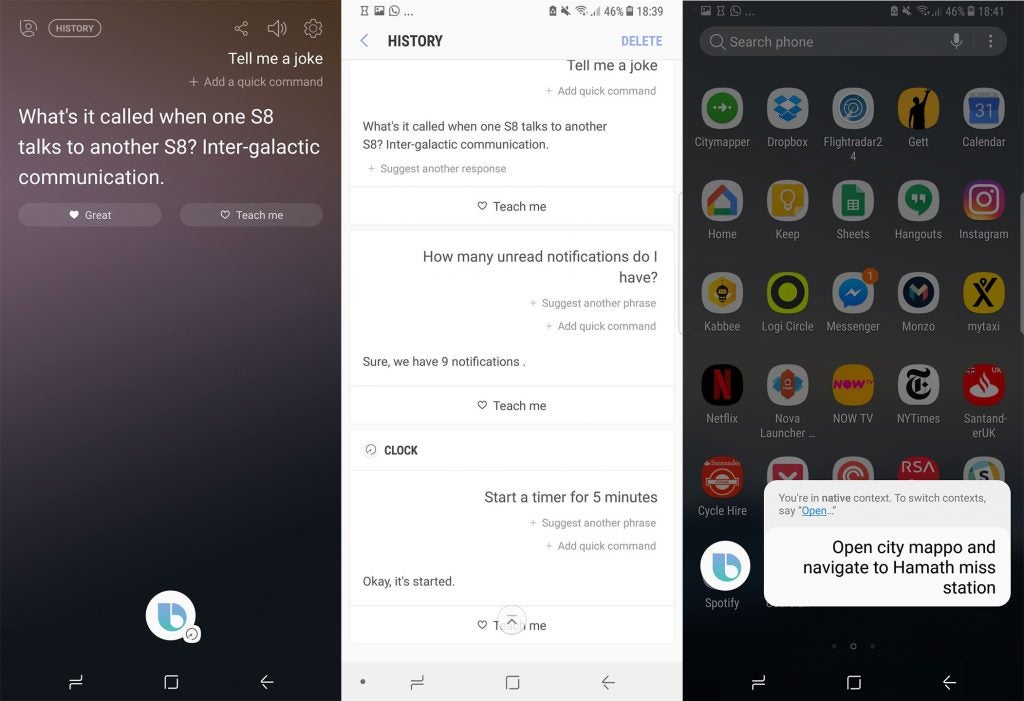 Left: An attempt at a joke. Middle: You can check your command history and give feedback. Right: British place names and some app names are beyond Bixby

Elsewhere, the experience is great. From the home screen you can swipe up or down to open your app drawer, and the notifications pane and quick options are non-obtrusive. The Edge Pane is just terrific, allowing you to put all manner of app shortcuts and other tools within a swipe’s reach, no matter which app you have open.

The home screen is a customisable grid, meaning you can fill it with up to 36 apps if you so choose, or drop it down to a 4×5 grid for bigger icons and easier access. You can even get rid of the horrid frames around your app icons that Samsung enables by default; it’s clear Samsung understands that more options is better, especially for picky phone users who will download a new home screen launcher as soon as they encounter one they don’t like. I haven’t yet felt the need to do so, which is very unusual for me. 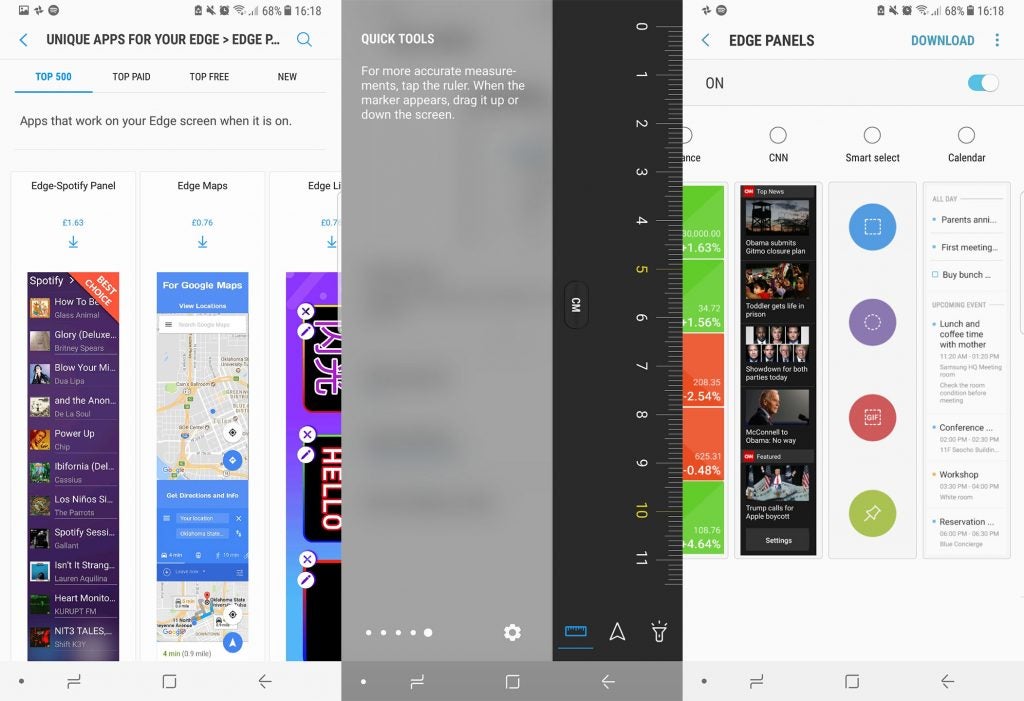 There are loads of Edge apps to add, and they can be accessed with a single swipe

Samsung Experience is also very customisable, with themes, icon sets, fonts and more downloadable from the Samsung Themes or Galaxy Apps store. They vary in quality, but it seems to be curated by a human, so good stuff should find its way to the store fronts. The only thing I hate? The default emoji set, which can’t be changed.

The process of unlocking your phone can be done in many different ways. This is a good thing, because the fingerprint scanner is in such an illogical and hard-to-reach place, I don’t use it at all.

There are other options: the iris scanner is pretty fast but a non-starter for me, because it doesn’t work if you wear glasses. There’s also facial recognition that only lets you register one version of your face. This, again, can be annoying if you scanned your face with glasses on and try and unlock with them off, because it won’t always work. It was my unlock method of choice, although it was reliable maybe 90% of the time, which left me reaching for my pattern unlock more often than I’d have liked.

The S Pen is a passive (no battery needed) stylus that sits in its own dedicated nook. It’s great, and is the most natural writing experience I’ve found on any device, perhaps aside from the Microsoft Surface Pro‘s Surface Pen. The screen supports over 4000 pressure sensitivity points, meaning tiny adjustments in pressure will change how your scribbles appear.

Its integration into Android isn’t just a few random note-taking apps; this is a proper, whole-hearted extra layer that works really well. The most obvious is its ability to take super-quick notes when the phone is in standby. Just pull out the stylus and the screen will turn on, allowing you to jot a quick note without having to go through the rigmarole of unlocking it tapping around. 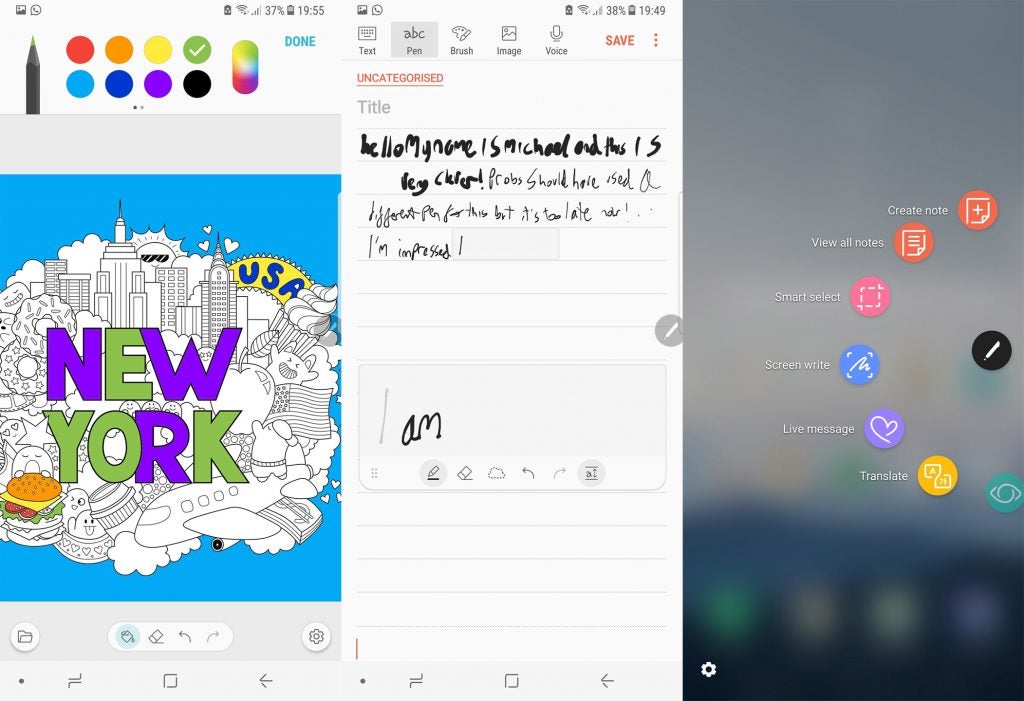 Left: The PenUp app is a digital colouring book. Middle: The built-in notebook shrinks your messy writing so it goes between the lines. Right: All the tools accessible from the S Pen menu

Better still is the shortcut wheel that can be found when you press the pen’s single button. This brings up not just the ability to create a new note, but also take an instant screenshot and write on it, translate what’s on screen and even start a screen recording to be saved as an animated GIF. You can also add your own shortcuts to the wheel if you have an app you use frequently with the S Pen.

Worried about losing the stylus? There’s an alarm that will sound if you start moving without docking it safely away.

There’s a bizarre missing feature, though. The Note 8 supports handwriting recognition – you can write directly onto the keyboard and it’ll translate your scrawls into text – but the Samsung Notes app provides no way of turning your notes into plain text.

Overall, though, the S Pen is a genuinely useful feature and not a gimmick, but is it worth the price premium over the standard Galaxy S8+? That’s up to you to decide.