Editor’s Note: We’re expecting to see the new Samsung Galaxy A5 (2018) launched in the near future, so while last year’s A5 remains a great value phone, you might want to wait and see what Samsung has up its sleeve at MWC 2018 before making a final purchase decision.

The Samsung Galaxy A5 is the sort of phone that has me questioning why the vast majority of people should buy a flagship device. After all, when a £369.99 device ticks almost all of the right boxes, why pay more?

For the first time, Samsung has more convincingly brought the high-quality flagship DNA down to the mid-range, which makes the A5 the first non-flagship phone from the Korean company that’s easy to recommend.

If it wasn’t for some slight build quality issues, and the OnePlus 5T representing a significant step up for not all that much more money, this could be the perfect mid-range phone.

Place the Samsung Galaxy A5 next to the Galaxy S7 and you’d be hard-pushed to immediately tell the difference between the two. Considering the Galaxy S7 was one of 2016’s best-looking phones, that’s strong praise.

The A5’s proportions are perfect; and that’s still a rarity in cheaper handsets. The majority of well-specced budget phones tend to have a 5.5-inch screen or bigger, but the 5.2-inch panel here reduces the size of the phone overall. The bezel is kept to a minimum and the ever so slightly curved back makes the device easy to hold in one hand.

There are even some design quirks that give the Galaxy A5 one over on its loftier Galaxy S7 sibling. The pastel colours – pink, blue and gold – are all subtle and attractive, while my review model takes a note from the Jet Black iPhone 7 Plus and is black all over. It’s a stealthy look that I’m sure will be one of the colour options available when the Galaxy S8 is announced. 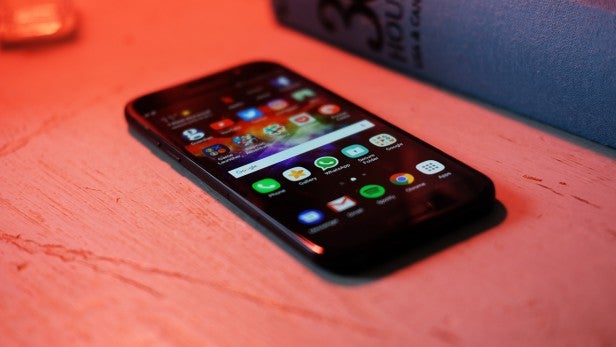 I’m a huge fan of the Galaxy A5’s look, but I’m not so keen on the corners that have been cut to hit the lower price tag.

The back panel is a scratch-magnet and picks up grease and smudges within only seconds of use. There also appear to be some quality assurance issues, especially with my review unit. Following a week of use, the back panel has come slightly loose and there’s a noticeable sound whenever you apply pressure. It’s a small issue, but something you wouldn’t find on a flagship Samsung product.

The headphone jack is on the bottom of the device, as it always should be, next to a USB Type-C port – the only on-sale Samsung phone with this reversible connection – and that’s it. In a strange move, Samsung has switched the speaker to the top side. This works surprisingly well, and although it isn’t a fantastic speaker, its position means it won’t be obstructed by your hand when you’re watching landscape video. 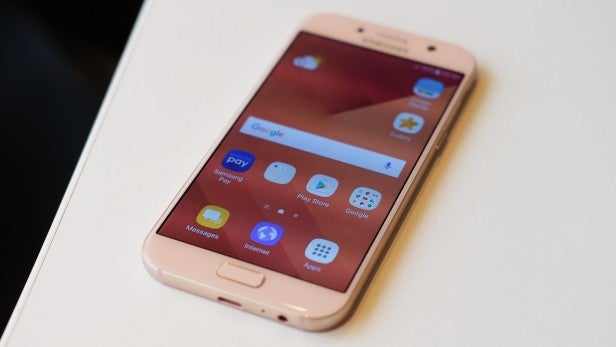 While the Samsung is rumoured to be ditching the physical home button and capacitive “Back” and “Overview” keys on the Galaxy S8, they’re still present on the A5.

It’s odd that the company has chosen to stick with them for so long, considering Android has very capable on-screen controls, but at least you get a fast fingerprint scanner on the front. It can’t quite match the Huawei and Honor handsets for sheer fingerprint scanning speed and accuracy, but it gets the job done.

The microSD card slot – which can handle up to 256GB cards, upping the base 32GB – combines with the nano-SIM on the top, while the clicky volume keys sit on the left. I’m a little annoyed that there’s no LED notification light on the front, but that’s something of a luxury at this price. 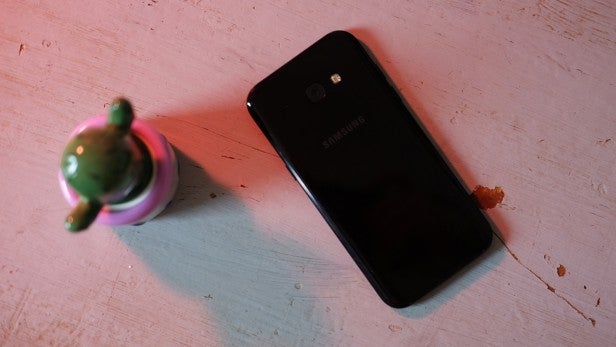 However, the biggest upgrade over the A5 from last year is the addition of an IP68 certification, which means your device will survive a dunk in a meter of water for around 30 minutes. While I wouldn’t advise you bathe with the phone, at least you know that your handset will recover from being caught in a rain shower.

There’s plenty to like about the AMOLED display on the Samsung Galaxy A5 – and, to my eyes at least – it’s just as good as the panel on the OnePlus 3.

The 1080p FHD resolution is perfectly acceptable at both this size and price, while the use of AMOLED, rather than LCD, results in providing extra oomph to bright colours.

Blacks are deep and inky, while reds and greens aren’t oversaturated. Samsung’s more budget-conscious AMOLED displays used to suffer from garish hues – but thankfully, this isn’t an issue any more.  Brightness is good, too, with a strong range between the lowest and highest settings. 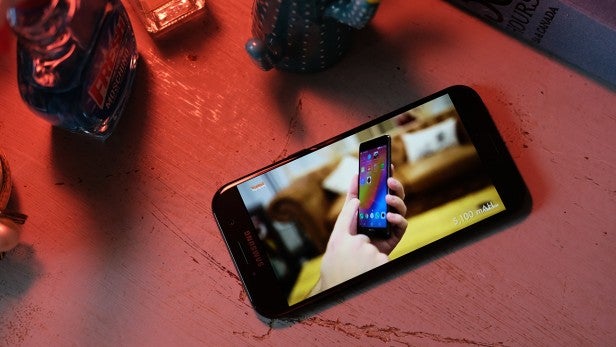 Samsung has added a number of software tweaks to alter the display. To be honest, though, I think the default “Adaptive display” setting is best. A colour slider lets you manually manage blues, greens and reds – but again, I feel it’s best left as it is.

The “Blue Light Filter” mode, which is similar to Night Shift on iOS, will remove certain blue light the comes off the screen, giving it an orangey tinge. You’re supposed to limit the amount of blue light you look at just before bed to aid sleep, and it’s a nice to see such a feature here.