Samsung Galaxy Note 10.1 Screen
To many, the Note 10.1’s screen was one of the biggest disappointments about the tablet. “Why is it so low-res?” is the common cry. This is thanks mainly to the iPad 3 with its stunning Retina Display, which sports a resolution of 2,048 x 1,536 (and is manufactured by Samsung, incidentally). Meanwhile, the Asus Transformer Infinity and Acer A700 have upped the game on the Android side of things with a 1,920 x 1,200 panel. 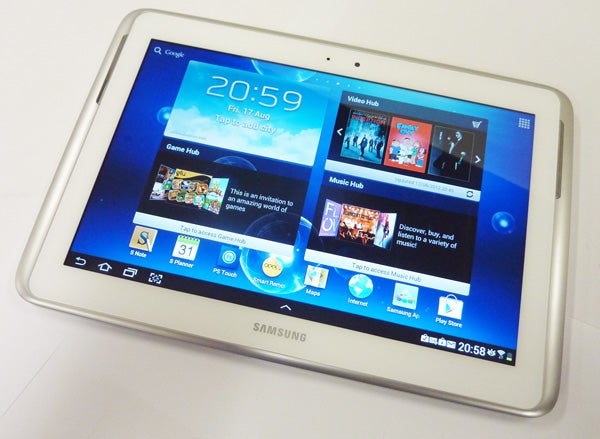 Compared to this, the 1,280 x 800 pixels that the new Note has to offer do seem pedestrian at best, especially for the obviously intended market segment of designers, technical illustrators and artists. However, while we’re let down by Samsung’s decision just as much as the next tech fan, it’s important to remember that – aside from the above – none of the other tablets on the market give you anything higher.

Unfortunately the panel doesn’t stand out in any other regard either, falling far short of the incredible brightness of the Transformer Prime and Infinity’s ‘Super IPS Plus’ screens. But that’s not to say it’s bad, far from it. 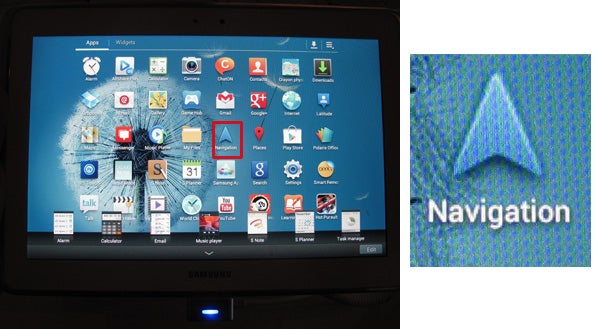 Unsurprisingly sized at 10.1-inches, the panel is of Samsung’s own PLS type, which is comparable to IPS. Backlighting is even with no sign of clouding, and though there’s minimal backlight bleed from the top and bottom, it’s not overly noticeable even when watching a movie with black bars.

Colours are vivid and blacks are deep, though as with most tablets, dark detailing has been sacrificed. To be honest, this is annoying on the average tab, but on this device which should cater to graphics enthusiasts if not professionals, it’s less forgivable. Still, we have no other complaints of note concerning the Note 10.1’s screen (sorry, couldn’t resist). As expected from PLS, viewing angles are great if not flawless, with just a hint of contrast shift but only at extreme angles. 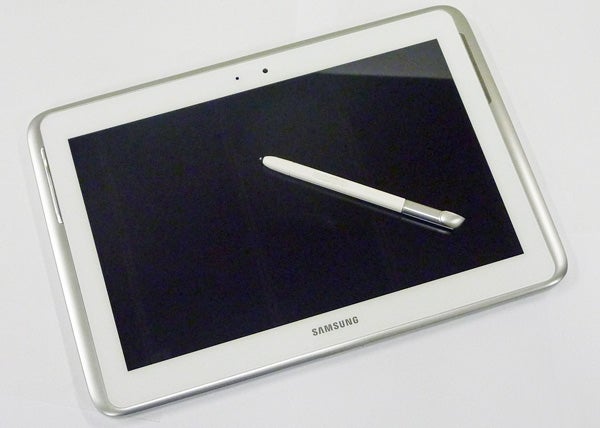 The screen’s 16:10 aspect ratio also makes it better suited to watching movies and reading comics than the iPad’s squarer display, though the 1,920 x 1,200 Transformer Infinity is by far the better option.

Samsung Galaxy Note 10.1 Speakers
We were hoping that the stereo speakers to either side of the Note tablet’s screen would make for a superior listening experience, and that does indeed turn out to be the case. By tablet standards, the audio from the Galaxy Note 10.1 is simply superb. 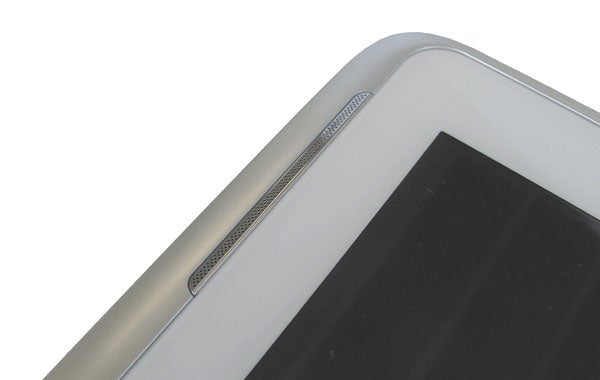 There’s more volume, directionality and clarity than from any other tab we’ve heard, though bass is negligible and at the upper end of the range distortion will rear its ugly head. Still, this is the first tablet where we would actually watch movies and play games without headphones at a pinch.

Samsung Galaxy Note 10.1 Software and OS
The Note 10.1 comes with Android 4.0.4, also known as Ice Cream Sandwich. Of course, fans of the Asus/Google Nexus 7 will know JellyBean is the latest and greatest Google OS, but other premium tablets haven’t received the upgrade yet either, and Samsung has promised that it’s only a matter of time. Unlike the usual TouchWiz antics, there’s genuine reason for the delay too, as the Note 10.1’s interface has been updated with many features unique to its power and S Pen.

We’ll cover all the S Pen-related gubbins in a moment, but first let’s go through a few of the other interesting bits that set the new Note’s Android implementation apart. Starting with the lock screen, it has up to four icons for direct access to apps. By default these are S Note, the web browser, video player and gallery viewer. 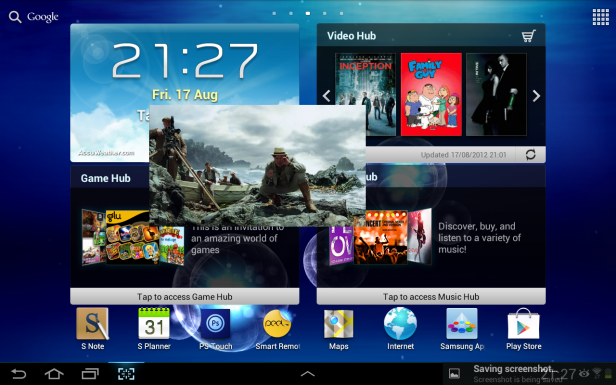 There are also some cool pre-installed non-pen apps, such as Polaris Office. Even ICS’ bottom bar has had a make-over, gaining a handy dedicated screenshot button and pop-up menu with quick access to apps and widgets like a calculator.

Then there’s the split-screen multi-tasking, or as Samsung calls it, Multiscreen. This feature has a heck of a lot of potential, giving the Galaxy Note 10.1 more of the productivity nous you might expect from a Windows slate. Click a custom button at the top right hand corner of an app, and it halves it – just like dragging a window to one side in Windows 7.

This lets you, for example, watch a video on one half of the screen while checking mails on the other. Or you can copy text from a web-page into an office document. Or you can cut out part of a picture from your images gallery and paste it into the S Note app. There are many possibilities, and this kind of innovation from Samsung is what gives the Note tablet unique appeal even without its S Pen. 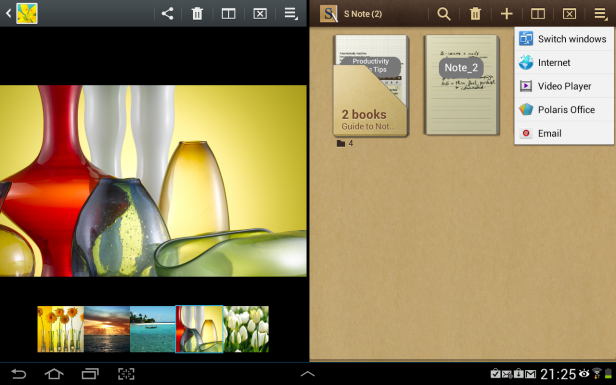 Unfortunately, Multiscreen is also rather limited. Most annoying is that it doesn’t let you open two of the same app. So you can’t, to give another example, have two instances of Polaris running simultaneously. The other big one is that it’s not an OS-wide feature, and apps need to be tailored to work with it. The included version of Photoshop Touch, to name one, doesn’t.