It’s been a while since we originally reviewed the Samsung Galaxy Note 10.1, and as the tablet is now available for around £360 sporting Android 4.1 AKA Jelly Bean, we decided to give it a bit of an update – specifically while testing out the optional full-size version of the Wacom stylus that Samsung calls the S Pen. The improved software brings better performance and new features, while the optional stylus gives a more comfortable writing and sketching experience, makes better use of the available 1,024 pressure levels, and gives you a pressure-sensitive eraser on its top. 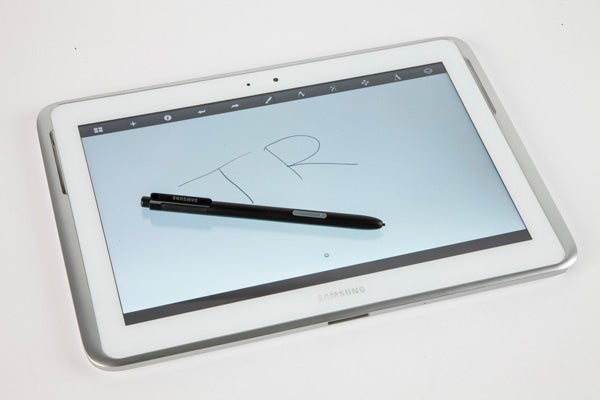 Multi Window
Remember how the Galaxy Note 10.1 originally offered Dual View, giving you (deep breath) proper simultaneous side-by-side multi-window multitasking? While pretty cool, it was not only limited to a few compatible apps but also didn’t go as far as Windows, which lets you layer a multitude of programs the way and size you want them. Now, that’s exactly what Samsung’s custom TouchWiz version of Android Jelly Bean 4.1 gives you, a feature the Korean company has called Multi Window.

Though it’s still limited to a selection of custom apps like the Samsung image viewer, media player, browser, and S Note/Planner, you can now have all of these open simultaneously, and make them any size you like. As updates go, that’s certainly not to be sniffed at. And if you’re the enterprising type, there are even community hacks on XDA Forums to make third party apps multi-view compatible. 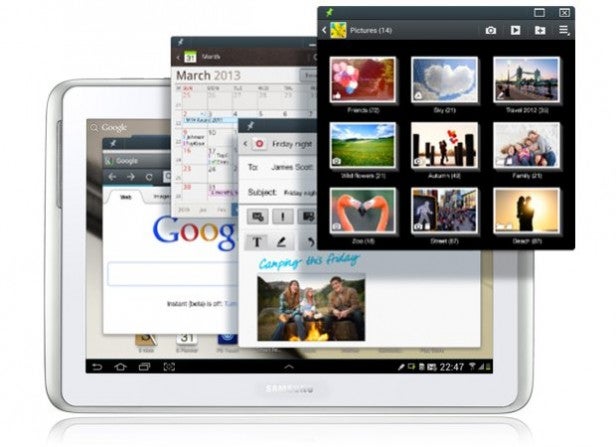 To control all these windows, there’s a new ‘button’ in the custom Samsung toolbar that can be accessed by pressing the up arrow in the standard Android toolbar. To the bottom left of this bar you’ll now find you can switch between Dual View, which sticks the top two apps on your screen side by side, or Cascade View, which puts all active ‘windows’ in a staggered list on the ‘desktop’.

Gallery App
Speaking of cascades, the Gallery App has seen a major overhaul. In addition to a somewhat unexciting but undeniably useful tile-like 2D view, you can now view your photos in a gorgeous 3D grid where photos scroll smoothly towards you (coming ‘out’ from the screen, so to speak), or in a 3D rotating spiral that moves images up and down while shifting them in the third dimension along its sinuous curves. 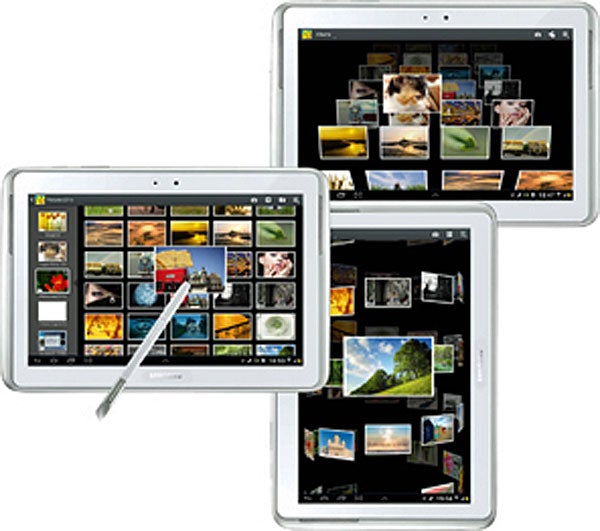 It’s hard to describe without seeing it, but everyone in the office agrees that, while it might not be more useful than more traditional ways of looking at pics, it’s the slickest image viewing experience they’ve yet seen.

S Pen Functionality and S Apps
Naturally, most of the updates relate to the S Pen and S Apps. Removing the S Pen from its holder now wakes the tablet and bypasses the lock screen (if you have no passcode set on it). Samsung has also enabled writing in its Email and S Planner (a calendar app) with the Galaxy Note 10.1, and the S Note app has gained the ability to record pen strokes.

The most nifty new addition to the S Pen’s functionality is the snazzily named Air View. As you might know, the Wacom technology behind this pressure-sensitive stylus means the tablet can detect it a around a centimetre away from the actual screen, and Samsung has capitalised on this ability with some nifty features. 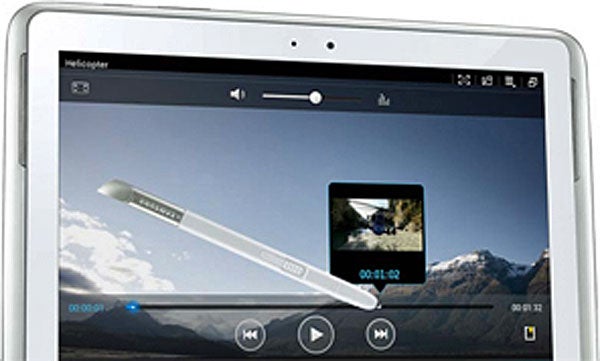 First off, you can use the pen’s hover function to preview emails, attachments, pictures and even video scenes. Second, you can simply hover the pen at the top or bottom edges of any scrollable page in compatible apps, and it will scroll the page up or down respectively. Neither of these functions are essential, but they are occasionally very handy.

Now if only Samsung brought out a mobile keyboard solution for the Galaxy Note 10.1, it would be a fantastic all-round productivity solution. Either way, Samsung’s upgrade of its Note 10.1 to Android 4.1 Jelly Bean is fantastic, providing an all-round improvement in the smoothness of the OS and buckets of extra gloss and functionality.

Read on for our impressions of the optional full-size S Pen stylus.