The Galaxy Book S sets a new standard for laptops with an unbelievably thin and light design. Excellent battery life and LTE connectivity also ensure this is one of the best laptops for on-the-go work, but underwhelming performance and niggling compatibility issues with certain apps mean this device can only be recommended if you're sticking to the basics and using well known apps such as Spotify and Netflix.

The Samsung Galaxy Book S feels like the start of a new laptop generation with a design so small and light that the term ‘ultrabook’ suddenly has a whole new meaning.

This is thanks to an ARM-based processor from Qualcomm, which not only allows for the more compact form factor, but also sees an excellent battery life and the capability to integrate SIM cards for on-the-go connectivity.

But while the Galaxy Book S is no doubt an early indication of what to expect with future, ground-breaking laptops, there are still a few niggling setbacks preventing it from seriously challenging the status quo.

The Samsung Galaxy Book S is an absolute marvel when it comes to laptop design. It’s a tiny little thing and weighs significantly less at 961 grams than rivalling 13-inch thin and light laptops. Having a laptop so dainty means working at a coffee shop or on the train becomes incredibly more appealing.

Build quality is excellent too, reaching the same standards as the likes of Apple and Dell. The smooth metal casing is pleasant to the touch and feels robust enough to withstand a few clatters and scrapes.

The two colour options – ‘Earthy Gold’ and ‘Mercury Grey’ – also give a little bit of glam to the notebook, with the former proving to be a refreshing change from the silvers and whites that overflow the market.

Keeping to current trends, Samsung has ensured the laptop has a super-skinny bezel for a lovey, clean look. It’s not quite as boundary-pushing as the Dell XPS 13, but it still comfortably one of the most stylish laptops in 2020.

Samsung has still found space to fit a 720p HD webcam too. It’s not the best quality, with a shimmering pixelated effect reminding you this isn’t quite Full HD resolution, but it’s more than adequate enough for work meetings and social catch ups.

With such a slender deck, there isn’t much room here for Samsung to add ports. Therefore, you get two USB-C ports and a headphone jack and nothing more. An adapter is at least bundled in the box if you want to hook up any peripherals via USB-A, but anyone who likes to transfer data via USB stick may still get frustrated.

The laptop’s down-firing speakers are surprisingly loud and clear, and don’t seem to be muffled by a desk’s surface thanks to the curved underside. I used the laptop to blast out Spotify tunes, and it performed admirably.

The keyboard is one of the few features Samsung has compromised in order to accommodate the laptop’s dainty size. The keys are just small enough to prove a minor nuisance, making it all too easy for typos. That said, it’s something I’m sure you can get used to after extended use.

It won’t be so easy to adjust to the squashed-down arrow keys if you use them frequently though. Anyone who likes to use the number pad will also be disappointed by its absence, although they’re a rare sight on ultrabooks. 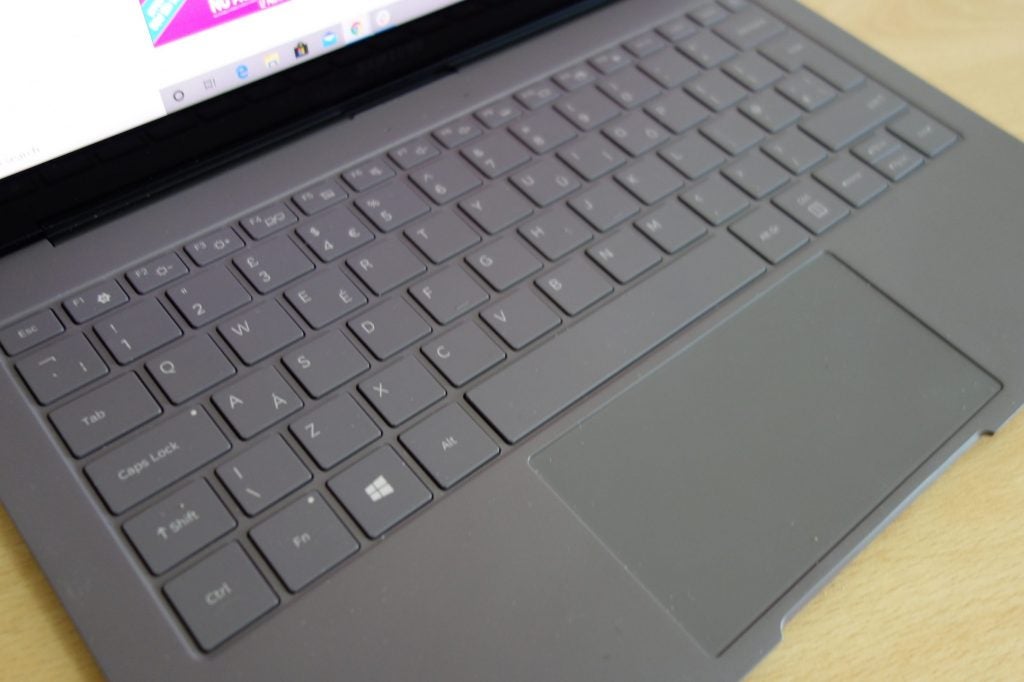 Samsung has at least made sure the keys have decent travel, with a satisfying click when you press down. The keyboard doesn’t meet the high standard set by the likes of the XPS and MacBook ranges, but that’s understandable given Samsung is working with such a tiny device. Plus, this is easily still good enough for typing up long essays and the like.

You also get a fingerprint scanner embedded into the power button on the top-right corner of the keyboard. It seemed pretty responsive, allowing me to easily log every morning without worrying about passwords.

There’s nothing to complain about for the trackpad. It’s wide enough for comfortable use, and responsive enough for pinpoint clicking.

Samsung is one of the best companies in the world when it comes to screen technology, so it’s no surprise that this is one area the Galaxy Book S excels in.

Colours are punchy, contrast is sharp, and the high brightness ceiling should allow for use outside without being disrupted by sun glare. This feels like one of the best laptops I’ve seen for Netflix streaming and Instagram scrolling, especially if you’re somewhere with limited space like a plane. 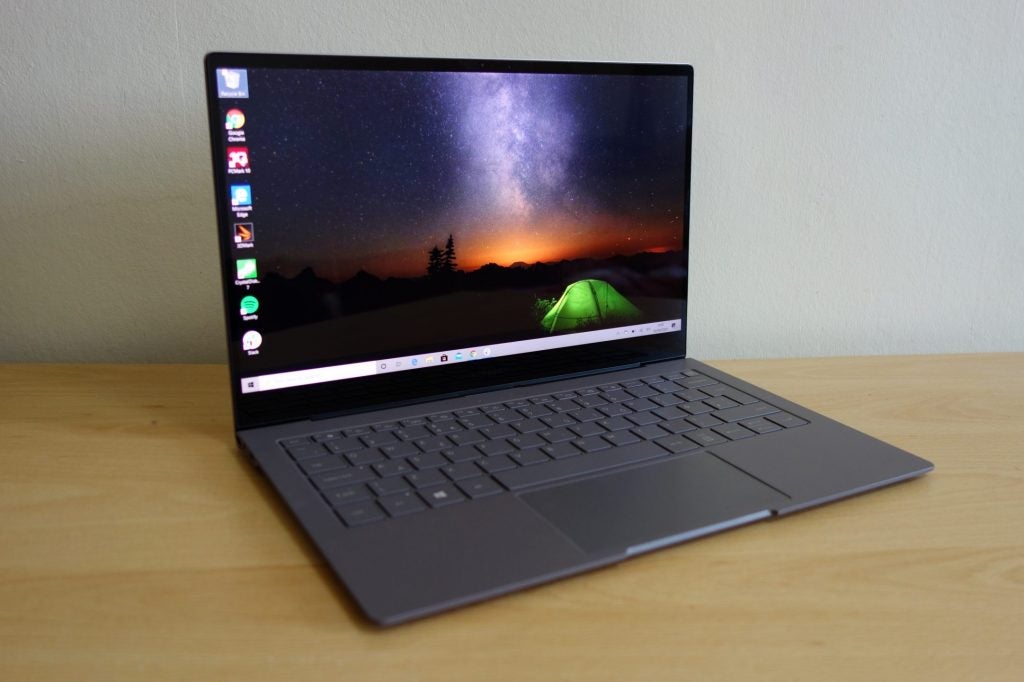 It is somewhat disappointing there are no Quad HD and 4K options here, but the decision to stick to Full HD does make sense to extend battery life and keep costs down.

Colour reproduction is noticeably accurate, with a 96% sRGB gamut coverage. But while the screen may be high quality enough for basic design work, the processor simply isn’t powerful enough for professional use. If you want to ogle at photos in impressive quality, this laptop is a great option. If you want to edit photos and video, then you need to look elsewhere.

The Galaxy Books S features a touchscreen, but since the hinge doesn’t allow the screen to be pushed back very far it can’t be used like a tablet. Still, using your fingers to scroll down Instagram feeds or pinch to zoom in can be really useful.

Samsung had to make compromises when designing such an ultra-portable laptop, chief of them all being the diluted performance. The Qualcomm Snapdragon 8cx chip seen in the Galaxy is far behind the more powerful Intel Core and AMD Ryzen chips you find in more traditional laptops.

The Surface Laptop 3 can be bought for around the same price as the Galaxy Book S, but it offer dramatically higher benchmark scores. Even the MagicBook 14, which costs a few hundred quid less, scores substantially better, as you can see in the table below.

The performance difference is noticeable in real-time use too. Open a few browsers up, and webpages will take a few seconds extra to load when compared to other laptops. Data-heavy spreadsheets also cause a bit of trouble.

I never got frustrated with the laptop’s performance though, and if you’re using it solely for web browsing, social media scrolling and video streaming, you probably won’t even notice the performance drop. Plus, the fantastic battery gain is more than enough to make up for the mediocre performance.

If you want more consider yourself warned though, graphics performance is predictably woeful, so you shouldn’t buy this device if content creation or gaming is important to you – unless you’re using Google Stadia or GeForce Now.

SSD speeds (1991mb/s read and 422mb/s write) are underwhelming too. This means it may take longer than usual to open an application or transfer data to the hard drive. And that stingy 256GB storage means you’re best sticking to the cloud for word documents and pictures.

Jumping over to connectivity, I found the LTE support incredibly useful. Popping in a 4G SIM, I could use this laptop at a park, in a café or even at home when my unreliable Wi-Fi network went down – it proved a lifesaver. That said, having a SIM card specifically for your laptop can get pricey, so many people may be content with just using mobile hotspots from their smartphone instead.

Take note that the Intel version of the Galaxy Book S does not have a SIM card slot, but does support Wifi 6 with compatible routers instead – it’s important you recognise at checkout whether the laptop is using an Intel or Qualcomm as there are some significant differences. 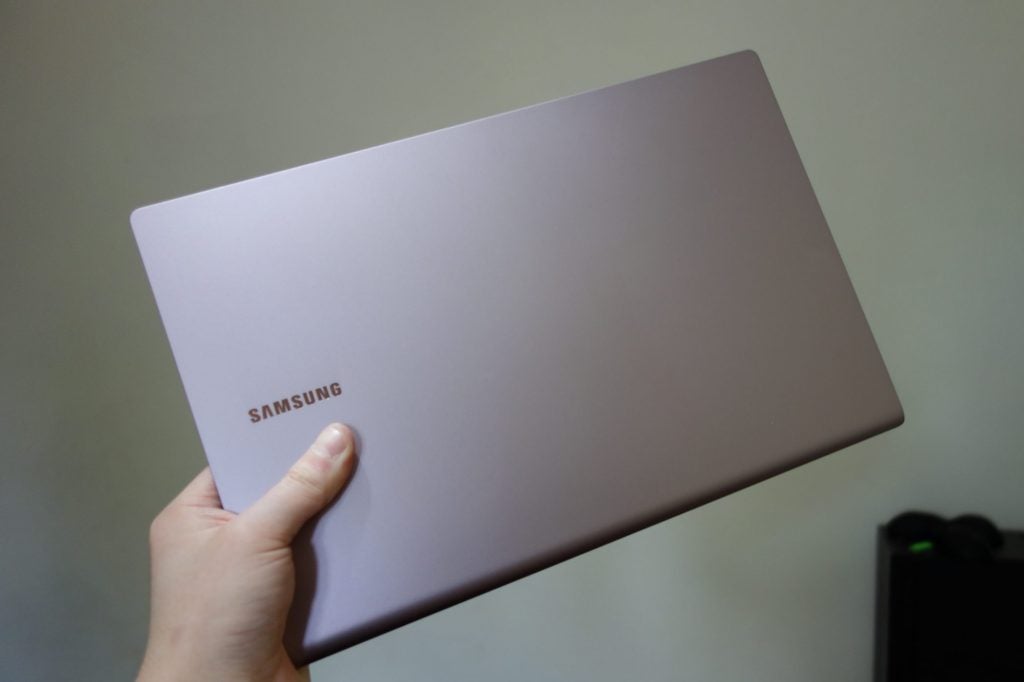 The biggest drawback with the Qualcomm system is that it suffers a lot of compatibility issues. All of the biggest apps/software such as Netflix, Spotify and Google Chrome worked fine, but I was blocked from downloading more obscure applications and the likes of Slack were only available in 32-bit format which is slightly slower and buggier than the standard 64-bit version.

Samsung claims the upcoming Intel Lakefield model of the Galaxy Book S supposedly solves all of these compatibility issues. However, the Intel model lacks LTE support and isn’t so hot in terms of battery life. This means there’s no perfect option, forcing you to make significant sacrifices whichever side of the fence you choose.

Despite what marketing campaigns may tell you, it’s becoming rarer and rarer for laptops to survive a day without requiring a recharge. A 10-hour battery life is considered a good figure to aim for, but the Galaxy Book S has set its sights even higher.

In our battery benchmark test, where we reduce the brightness down halfway and set up a looping video, Samsung’s laptop lasted just shy of 15 hours – one of the best results I’ve seen in a while.

Even with LTE activated, I was able to keep the laptop running throughout my office work hours from 9.30am to 5.30pm. 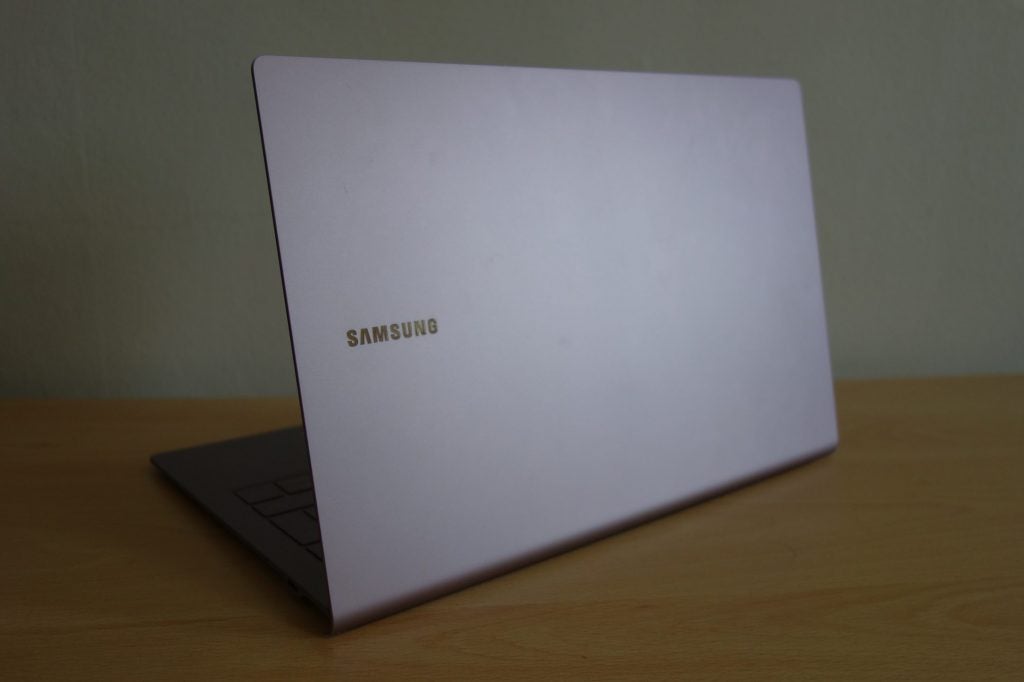 What’s more, the Galaxy Book S uses any generic USB-C power charger, so you don’t need to lug around a dedicated one. I’ve used both my Android smartphone and Nintendo Switch chargers, and I really appreciated the convenience of easily swapping between devices for a top up.

It only takes a couple of hours for the tank to be filled too, so it’s no disaster if you forgot to charge it up the night before.

You should buy the Samsung Galaxy Book S if…

You shouldn’t buy the Samsung Galaxy Book S if…

Is the Samsung Galaxy Book S good for gaming?

No, the Samsung Galaxy Book S isn’t powerful enough for gaming beyond the low-powered apps you’ll find via the Microsoft Store.

Take a look at our Best Gaming Laptop list if you’re looking for a gaming laptop.

Does the Samsung galaxy Book S have a touch screen?

Yes, the Samsung Galaxy Book S does have a touchscreen.