The Honor MagicBook 14 is the best-value student laptop you can buy right now. For less than £600, the MagicBook 14 will handle all the word processing and web browsing tasks you can throw at it. Rival devices fall short on either price or performance, so this really is the best budget-buy laptop currently available.

Following closely in the footsteps of its parent company and the Huawei MateBook D 14, Honor brings us the MagicBook 14. This new laptop aims to offer productivity-friendly specs at student-friendly prices.

If you’re aware of the Huawei MateBook D 14, then you’ll probably feel a bit of déjà vu when it comes to the MagicBook 14. Beyond a different logo and a solitary design tweak, you could pretty much consider the two devices as different models of the same range.

Not only does the MagicBook 14 look very similar to the MateBook D 14, but both laptops take several design cues from Apple’s MacBook range. The MagicBook offers a sleek metal finish with flat black keys, both of which give off Apple vibes.

Thankfully, these consequences of inspiration serve as a positive for the MagicBook 14. Visually, it’s premium beyond its price, sporting a look both modern and stylish. 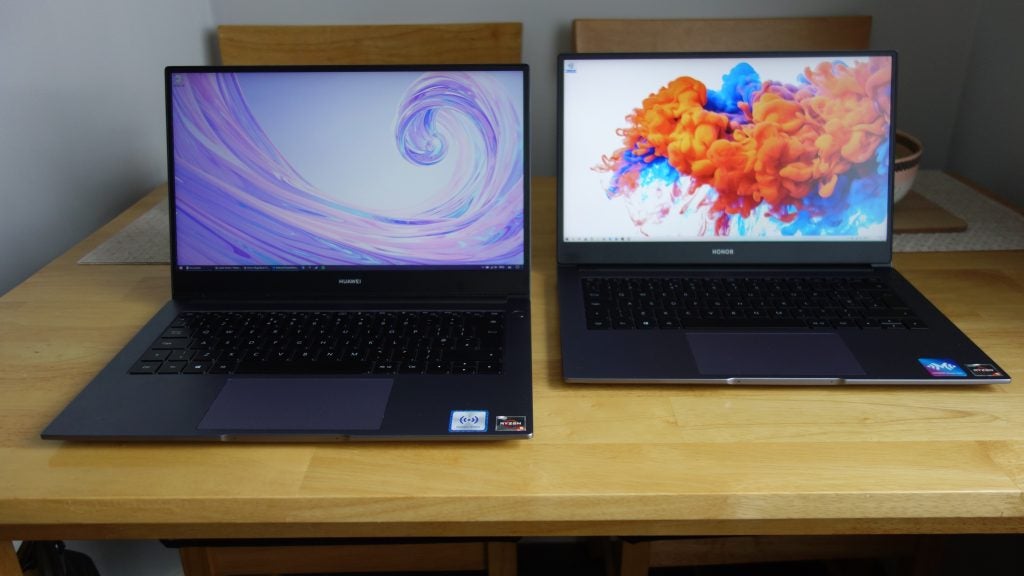 Keep the MagicBook 14 open or look at it from beneath and it’s indistinguishable from the MateBook D 14; but close the lid and you’ll get a nice surprise.

While the Huawei sticks to a uniform colour on the back, the Honor adds a highlight. On the Space Grey model I’m reviewing, the Honor logo and the edge of the lid have a metallic purple tinge to them – adding a refreshing accent to a relatively plain design. I definitely prefer Honor’s approach to Huawei’s – both models are aimed at students, yet Honor’s laptop offers a way less boring design. 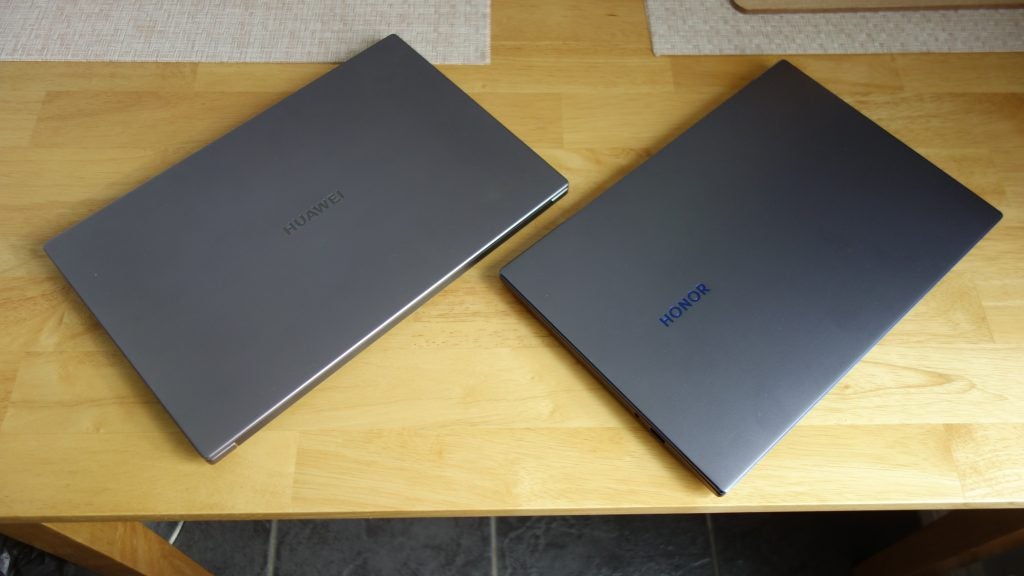 The MagicBook 14 offers a pleasing selection of ports. There’s one USB-C, USB-A 3.0, USB-A 2.0, a full-size HDMI and a headphone jack. The only disappointments are the solitary USB-C port (since this is used for charging, it’s likely to be occupied a lot of the time) and the lack of Thunderbolt 3 support for speedy data transfers.

The Honor MagicBook 14 is a relatively cheap laptop but it manages to have a really enjoyable typing experience.

The MagicBook offers good sized keys with a clicky, yet not too loud, press. More travel would have been welcome, but I’ve yet to encounter any form of typing fatigue through testing, making it suitable for any long work sessions. 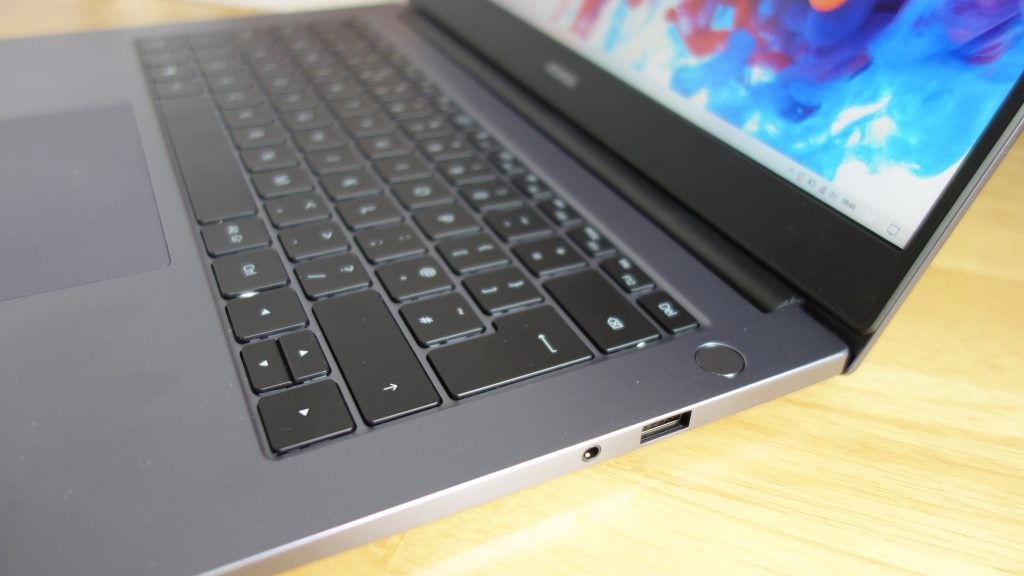 Alongside the keyboard, you also get a fingerprint scanner integrated into the power button. The scanner is easy to set up and I’ve experienced no issues with regards to reliability. It almost instantaneously snaps into your account whenever used.

The “webcam key” sits in the middle of the function keys and raises up when clicked. The awkward angle of these webcams has been well publicised. The solution isn’t ideal, and frequent users may be put off. However, it’s also just nice to have while enabling Honor to keep a small screen bezel. 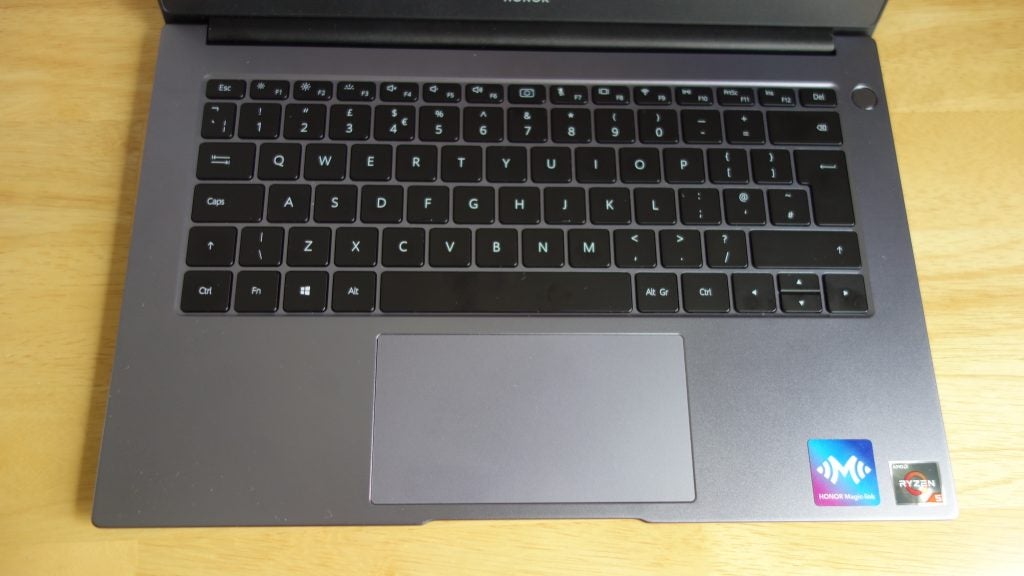 The trackpad isn’t much to write home about; it isn’t the biggest, nor is it the smallest. The pad offers a decent amount of travel across its whole surface area, and I haven’t run into any issues in use.

The Honor MagicBook 14’s display might be one of its worst features, but that by no means drags down the quality of this value-for-money machine.

In our screen testing, the MagicBook 14 offered up some poor scores: 62% sRGB, 43% Adobe RGB and 44% DCI-P3 colour coverage. These results suggest colour accuracy won’t be reliable here, so you certainly won’t want to use it for design work. These stats shouldn’t really an issue in everyday use, as long as you’re content that Netflix content won’t be as the director intended. 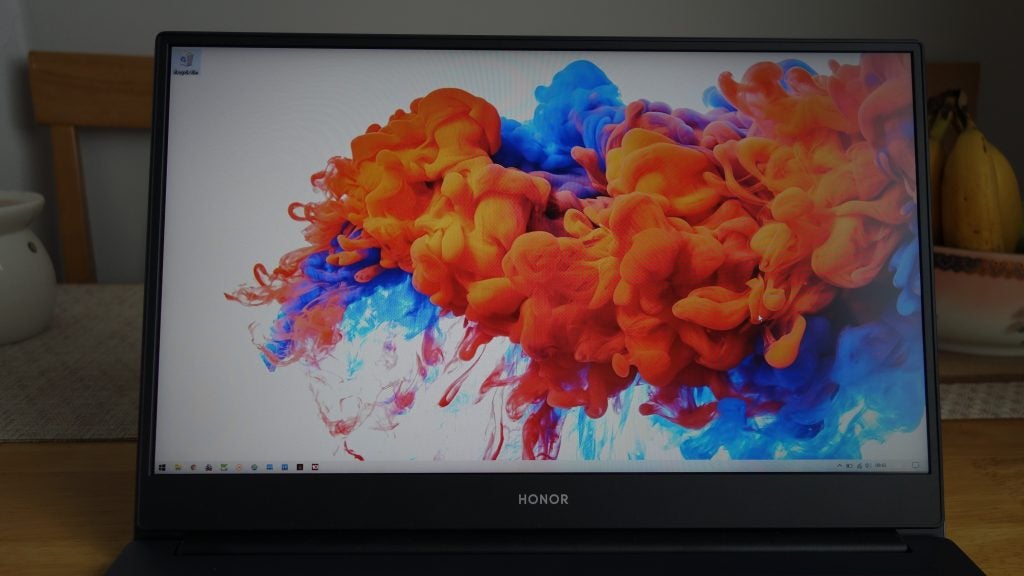 Having spent some time with the MagicBook 14, I don’t believe the screen looks that bad. True, it doesn’t pop in the way an OLED would, or provide the detail of a screen with a resolution higher than Full HD. Nevertheless, it’s more than good enough for productivity tasks and watching the likes of Netflix.

Note that the MagicBook 14 display doesn’t get very bright, just surpassing 250 nits in our testing, which is below the 300-nit target. It might not be a laptop that’s ideal for working outdoors, but the matte display will at least help to prevent the consequential glare of a dull display.

The Honor MagicBook 14 is far from a spec behemoth, including the relatively modest AMD Ryzen 5 3500U. However, in practice, the MagicBook 14 provides plenty of bang for your buck.

As you can see from the benchmarks below, the MagicBook 14 performs well against rivals – rivals that cost between £100-£300 more, in fact.

Furthermore, it’s also possible to see how similar the MagicBook and the Huawei MateBook D 14 are. The specs of these two laptops are near-identical, with the different SSDs (256GB on our MagicBook 14 and 512GB on the MateBook D 14) seemingly the only differentiator that could explain the varying PCMark 10 scores.

Despite the slightly lower speeds than the MateBook D 14, the Honor MagicBook 14 SSD speeds remain really impressive for the price – coming in at 3,449.74MB/s read and 1,650.47MB/s write. The MagicBook 14 is competitive with much pricier devices, such as the Razer Blade Stealth 13 and Surface Laptop 3 13 in this area, ensuring that downloading data or opening applications is reasonably nippy.

While not linked to its performance, the MagicBook 14 does feature an awkward storage partition that splits your SSD into one 80GB drive for programs and files then leaves the rest unused by default. This isn’t a deal-breaker, but it could definitely confuse some users who will worry why they’re getting “Storage Full” messages so soon.

Throughout testing, the Honor MagicBook 14 performed impressively for its price. For productivity tasks in everyday use, you’ll rarely run into any bumps in the road. When it comes to browsing the web, I was able to run upwards of 10 tabs in Chrome before noticing any slowdown.

The Honor MagicBook 14 provides just what you’d want in terms of battery life for a student/productivity machine. Our battery testing gave results of just under nine hours – and this played out in real-world use too.

From first lecture to last, or a full working day, the MagicBook 14 will comfortably see you through. For when you do need some charge, Honor offers a 65W charger that brings battery back up to almost half from 0% in just half an hour. 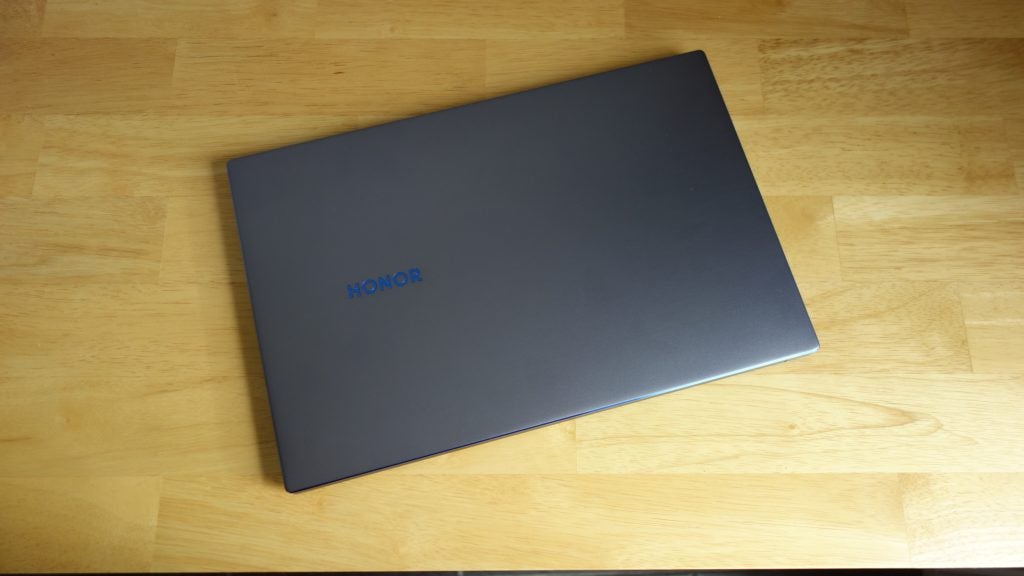 Should you buy the Honor MagicBook 14?

The Honor MagicBook 14 is a fantastic budget laptop ideal for students, office workers or those who just want a lifestyle laptop on the cheap. But as I’ve demonstrated with this review, it’s hard to talk about the Honor MagicBook 14 without mentioning its Huawei MateBook D brethren.

If you aren’t quite set on a feature or two of the MagicBook 14, the Huawei MateBook D 14 or 15 are the next best choice in this price range. With the MateBook D 14, you can get double the storage. If you need a bigger screen, there’s the MateBook D 15, but battery life is reduced. Both MateBooks cost between £50-£100 more.

A MagicBook 15 does exist, which is also very similar to the Huawei, but there’s no word on if or when this will reach UK shores.

Personally, I’d choose the MagicBook 14 over all these options. Cloud solutions negate the need for tons of storage these days, especially in the case of productivity laptops, and the 14-inch form-factor is the ideal size for easy portability.

The Honor MagicBook 14 is the best-value student laptop you can buy right now. For less than £600, you’re getting a laptop that can handle all the word processing and web browsing tasks you can throw at it. Rival laptops are outmatched on either price or performance.