The Surface Laptop Go is a fantastic device at a super-affordable price. It offers decent performance and comfortable keyboard that’s ideal for students, office workers and social media addicts alike. The low-resolution display means it isn’t the best for streaming Netflix, but it will be tough to find better value elsewhere.

The Surface Laptop Go looks like a Surface Laptop 3 that grazed a Shrink Ray blast, featuring a 12.4-inch screen opposed to its bigger sibling’s 13.5 inch display.

Fortunately, the price has shrunk alongside the screen, plummeting from a £999 starting price to an even more affordable £549, making it an ideal option for both students and those on a budget.

Unfortunately, Microsoft has been forced to make a few compromises beyond simply squeezing down the screen size – the display’s resolution has taken a hit, and there’s no backlight for the keyboard, which may be a problem for nocturnal social media snoopers.

All that said, the Surface Laptop Go remains an excellent-value laptop, proving that a Chromebook isn’t the only option for those with a budget under £600.

The Surface Laptop Go is one of the smallest laptops I’ve ever reviewed, measuring in at just 278mm tall and 206mm wide compared to the 308mm x 223mm dimensions of the Surface Laptop 3. This means it’s incredibly easy to slot in a rucksack, or even a handbag.

It isn’t quite as thin as high-end Ultrabooks, though, with Microsoft evidently feeding it too many sugary snacks. This also means it weighs 1.11kg, which is surprisingly hefty for such a small laptop. Nevertheless, picking it up with one hand and lugging it around town remains an effortless experience. 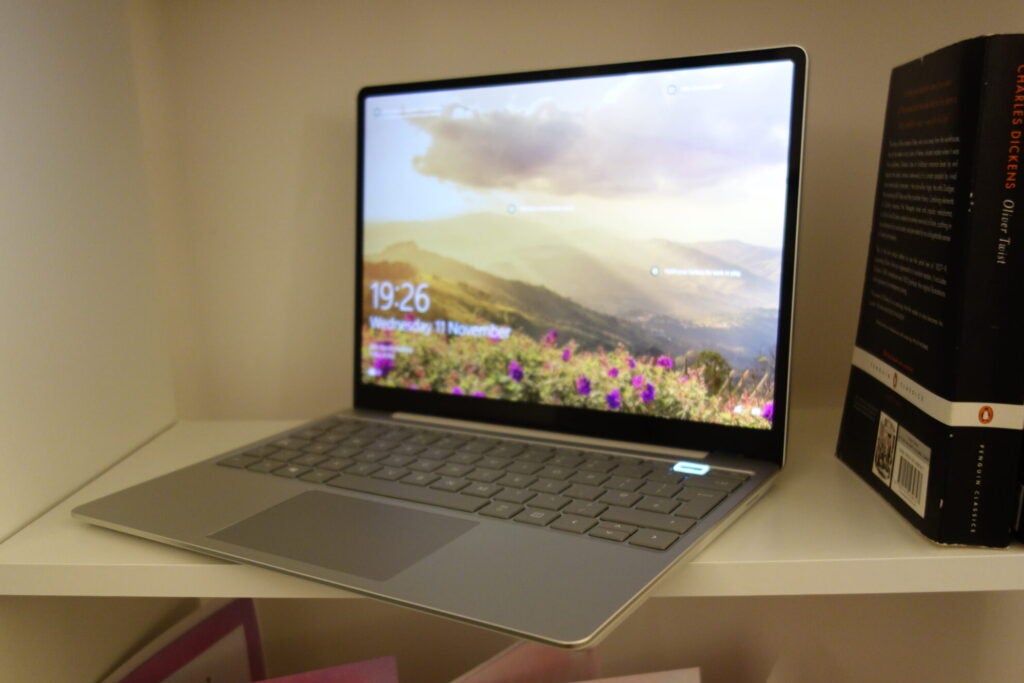 Microsoft says the base of the laptop is made of “polycarbonate composite resin system with glass fiber” – which is a posh way of saying plastic. Don’t let that deter you, however. The Surface Laptop Go still feels great next to the budget-feel of sub-£200 Chromebooks. The keyboard cover and top of the lid are both made of aluminium, ensuring a better build quality than most laptops at this price point.

Microsoft offers the laptop in three colour options – Ice Blue, Sandstone and Platinum – that all impress in their own right. The Blue option is my favourite, since it makes a refreshing change from the horde of blacks, greys and silvers sitting on the shelves of PC World.

The Surface Laptop Go features a decent selection of ports, with 1 x USB-C (still no Thunderbolt), 1 x USB-A, a headphone jack and Surface Connect port. Personally, I’d rather see Microsoft ditch the Surface Connect port and opt for a second USB-C port, since its own proprietary cable would often slip out of place. But the offering here should just about be adequate for typical users. 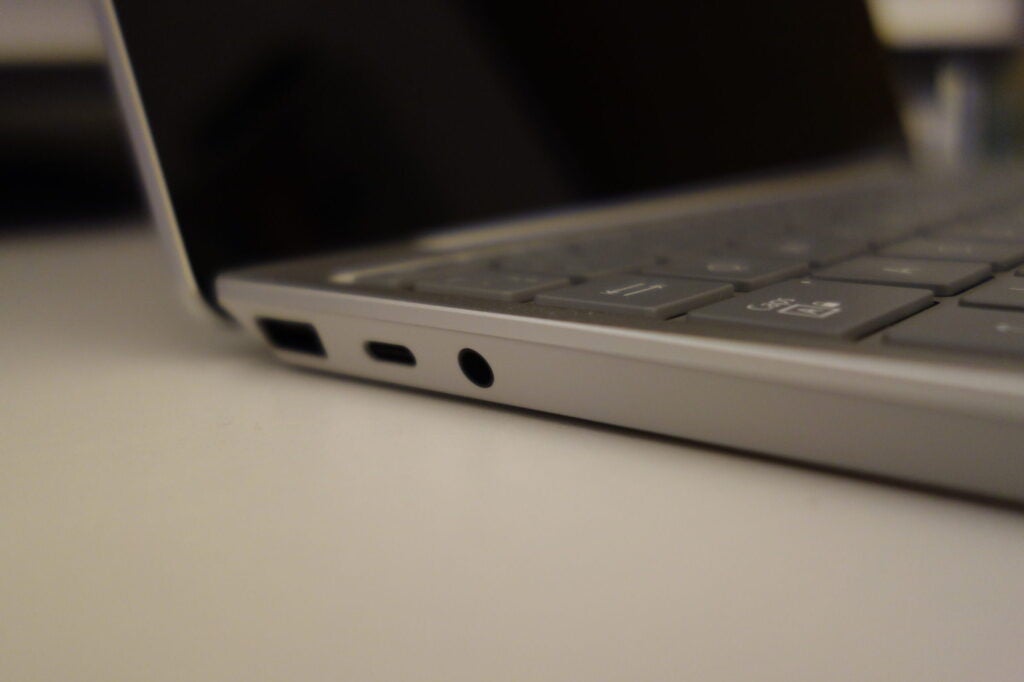 The 720p webcam can be found nestled in the top bezel. Video quality is a little pixelated, but it’s adequate enough for Zoom calls. Microsoft has also introduced dual far-field studio microphones, which are well equipped to pick up your voice with clarity.

The speakers are located below the keyboard, which may sound like an odd placement, but it prevents the audio from being muffled by a desk. I watched a few episodes of Umbrella Academy on the laptop, and the audio was easily clear and loud enough for me to follow the dialogue without issue.

It would be fair to assume the Surface Laptop Go features a condensed keyboard due to its dinky proportions, but Microsoft has been able to fit in a full-sized unit. Of course, there’s no number pad – but it would be near-impossible to squeeze that in here.

The keys offer enough travel to ensure comfortable typing. In fact, I can’t think of another laptop at this price point that features such a well-made keyboard. 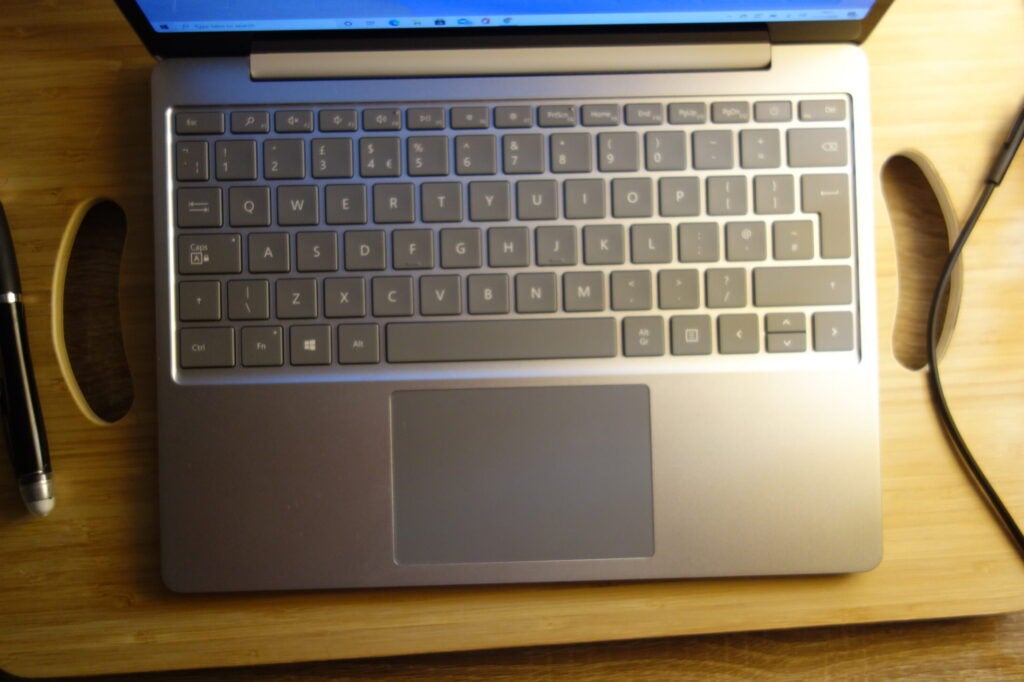 A fingerprint scanner has been embedded into the power button, which flashes a bright white when on the login screen. It’s incredibly responsive, making it very easy and quick to turn the laptop on in the morning. Unfortunately, the fingerprint scanner isn’t available on the base £549 device, so you’ll need to pay at least £699 – which seems pretty harsh.

The biggest issue with the keyboard is the lack of backlight. This is an odd omission, even for a budget-friendly laptop such as this. But, so long as you don’t use it in the dark, you probably won’t notice its absence.

There isn’t much to say about the trackpad, other than it’s reasonably sized, super-responsive and satisfyingly smooth to the touch.

The Surface Laptop Go sees a 12.4-inch touchscreen display, which is one of the smallest you’ll find on a laptop these days. Personally, I didn’t find the size problematic, especially since it makes the laptop easier to stow in a bag. It was still perfectly big enough for watching Netflix, too.

The biggest issue with the display is its low resolution, coming in at 1536 x 1024. This is noticeably below the typical Full HD quality. As a result, pixels were noticeably visible when I was watching Umbrella Academy on Netflix, giving it an unflattering grainy look. 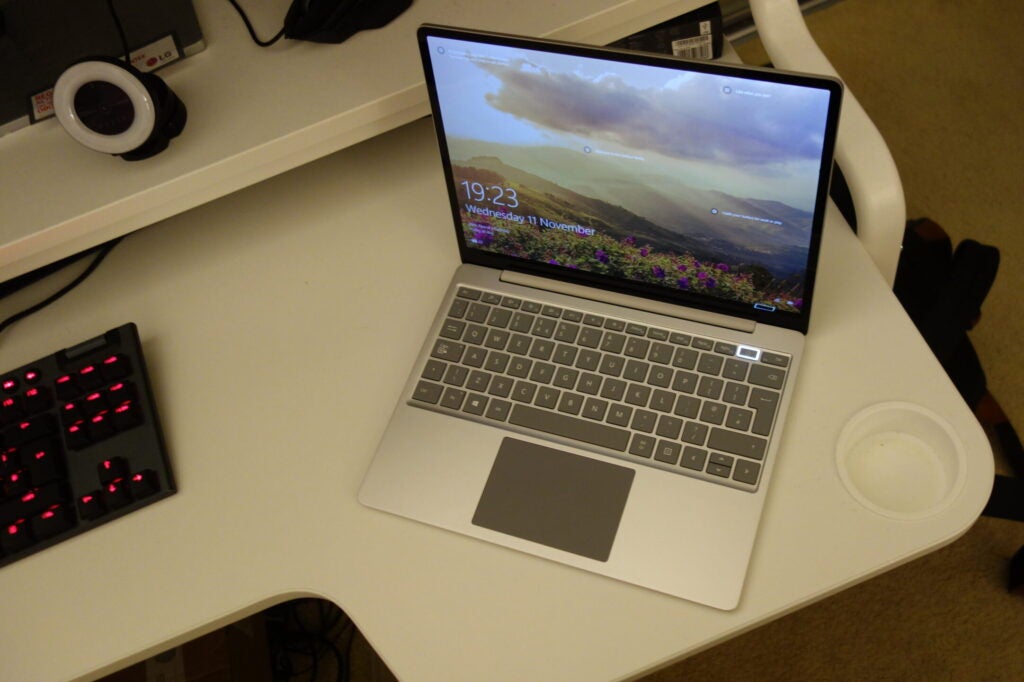 That said, I still enjoyed using the Surface Laptop Go for video streaming. The high 400-nit brightness and decent 1184:1 contrast ensured a punchy picture, while colours were accurately displayed with little to no distortion. The visible pixels are distracting, but there aren’t a great many Windows 10 laptops at the Surface Laptop Go’s starting price that look substantially better – although that certainly isn’t the case when you plump for the £899 configuration.

With a 3:2 aspect ratio, the Surface Laptop Go is best suited for productivity tasks. Its tall size means it’s well equipped for websites and social media, squeezing more text and images onto the screen than the typical 16:9 screen. The consequence of this is you’ll get black bars sandwiching video content on the likes of Netflix, further emphasising this isn’t the best laptop option for video purists.

The Surface Laptop Go sees the same 10th-Gen Intel Core i5 processor across all of the available configurations, with 4GB of RAM provided with the £549 model and 8GB of RAM featuring in the two pricier alternatives.

This is arguably one of the most powerful laptops at its price point, with my Intel Core i5 and 8GB review model seeing superior figures to the likes of the similarly priced Honor MagicBook 14 (Ryzen 5 3500U). The Go breezes through basic productivity tasks, whether that’s writing up essays on Google Docs or having multiple browser tabs and apps open simultaneously.

It’s worth noting that the Go starts up in Windows 10 in S Mode. This operating system is very similar to ChromeOS in that it restricts downloads to the app store. This is useful for young students or grandparents who may accidentally download something malicious; but, otherwise, I strongly recommend you to take advantage of Microsoft’s free upgrade to full-fat Windows 10, since it’s more user-friendly and offers significantly more freedom.

Back to performance, the Surface Laptop Go is unfortunately limited to Intel UHD Graphics, which means it isn’t powerful enough for entry-level creation and native gaming. If those are important features for you, you’ll have to spend above £900 – so we can’t really be displeased with the Go’s limitations here.

I was disappointed by the SSD read and write speeds, however, coming in at 1956MB/s and 706MB/s respectively. The Honor MagicBook 14 was able to hit 3450MB/s and 1650MB/s in the same test, proving that it is a far speedier machine when saving and loading data on the hard drive. But if you reckon you’ll be using Cloud services such as Google Docs frequently, this shouldn’t be a major issue.

I also think the SSD storage capacity is pretty stingy, with the base model offering only 64GB of space, which is pitiful. The £699 is a far better option with 128GB of storage capacity, but that still isn’t much room if you like to store your photo and video collection to the drive.

Surface Laptop Go battery – Unspectacular, but it can last a working day

The Surface Laptop Go managed to last 8hrs 44mins in our battery test, which includes turning the brightness down to 150 nits and cycling though the PCMark 10 office benchmark test until shutdown.

This result is fine, but not spectacular. The Go surpassed its bigger and more powerful Surface Laptop 3 sibling and saw a similar result to the Honor MagicBook 14. This means it’s round about the norm for a Windows laptop at this price, getting you through a work day away from the mains. 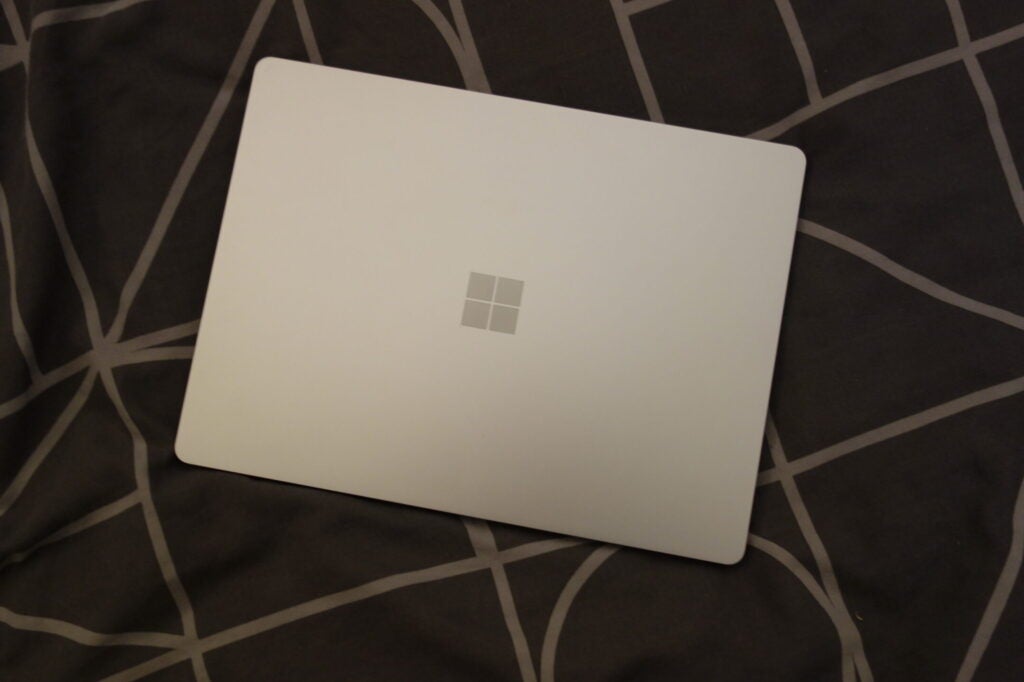 It’s difficult not to compare this result to the new MacBook Air, though, which is apparently capable of lasting around 18 hours on a single charge. But then again, the MacBook Air starts at £999 and so is more pricey by a few hundred quid.

Should you buy the Surface Laptop Go?

The Surface Laptop Go is a fantastic little laptop, hitting a price point we rarely ever see for a Windows 10 Intel-powered laptop.

Its dinky size, powerful performance and comfortable keyboard make it an absolute bargain for those who want an ultra-portable productivity machine; it’s ideal for students, office workers and social media snoopers.

There are major drawbacks here, though. Most notably the low-resolution screen, which means there are better alternatives if picture quality for Netflix videos is a priority. The lack of keyboard backlight is also disappointing.

However, if you’re looking for the best-value Windows laptop for basic productivity tasks, then the Surface Laptop Go is our top recommendation.