The DAB radio is in danger. Internet radios are swiftly coming down in price, and now that even technopohobes have Wi-Fi in their homes, they are a fierce rival for the kitchen-top DAB unit. The Roberts Stream 105 dumps the DAB and FM tuners, offering the pure streaming experience for under a hundred pounds. Let’s find out how it compares to the best from Pure and Logitech.

Roberts’s Stream 105 is an unassuming little radio. Compared to the strikingly stylish Pure Evoke Flow and the shiny black Logitech Squeezebox Radio, it looks traditional. From just a quick look, you wouldn’t necessarily assume it’s anything more advanced than a DAB set – it looks very similar to the Roberts Classic Lite DAB/FM combo. There’s no big colour display, for one. 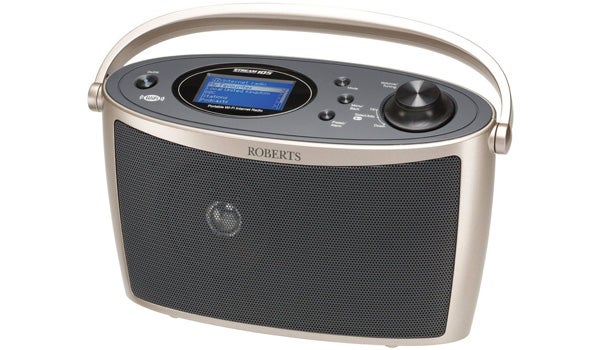 Turn the unit around and you’ll notice the first dead giveaway – there’s no aerial. While many Internet radio units back-up their streaming with an FM or DAB tuner, the Wave 105 doesn’t.

All the radio’s controls are laid out intuitively on the top panel, which is helpfully sloped to make viewing from a distance easier. The control you’ll end up using the most if the large knob to the right, used to scroll through menus and as the select button – it depresses with a substantial click. This dial is great. It’s big, it’s rubbised on the sides and it’s pretty well-made.

The speaker grille, covering the single speaker cone, is coated metal and fairly strong. It flexes a little under pressure, but this is normal. 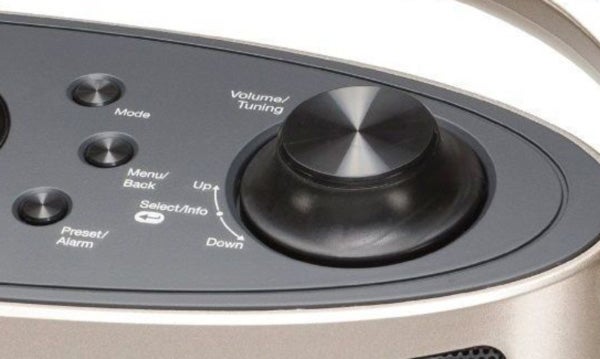 Next to the competition though, the Roberts Wave 105 does otherwise seem a bit light and plasticy. This, along with the carry handle, helps keep the radio super-portable – but it’s important to remember the lack of DAB/FM tuners limits the usefulness of this gadget outside of the home. It’s happy to be powered by six C-type batteries instead of the AC adaptor, but take it into a summery meadow and you’re unlikely to find a Wi-Fi hotspot.

It’s not a complete dead loss out in the field though. Around the back there’s a 3.5mm auxiliary input, and with the help of an up-to-date smartphone there’s a good chance you could tether your mobile internet connection to get up its streaming and running. Or alternatively you could let the smartphone do the streaming legwork. Smartphones spoil all the fun.

Also around the back of the Roberts Wave 105 are a 3.5mm headphone jack and a USB port, to update the device’s software. It’s a type B socket though, so you can’t plug in USB sticks to play MP3s.

Internet radio gives you access to thousands of stations, much more than a DAB or FM set could dream of. There’s a slightly more involved setup process to wade through upon initial start-up. Where traditional radios simply have to be tuned in, the Roberts Stream 105 had to be hooked into your home wireless network. There’s no Ethernet port on-board to let you connect directly to a router here. Not that you’d want to do so in most eventualities.

The Stream 105 guides you through the setup process using a simple wizard. Essentially, all you have to do is select the right wireless network and enter in the router’s security key – using the big ‘ole nav dial to select characters in a virtual Qwerty keyboard.

Typing-in terms with a rotary dial like this is far from ideal, but this radio rarely leaves you in this situation, instead letting you easily flick through lists instead. The Roberts Stream 105 can access oodles of radio stations, and their associated podcasts – plus the music library of your home computer thanks to its UPnP feature. Its rubberised knob positively excels at cycling through content libraries, and the software keeps up with quick scrolling very well. 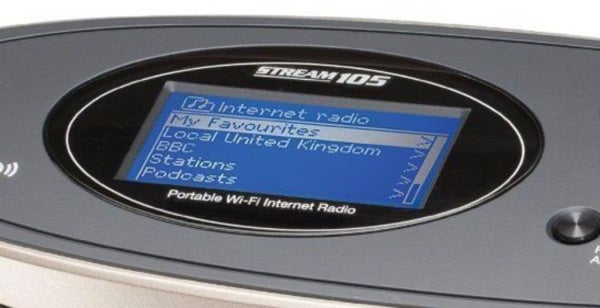 The dedicated Mode button, which cycles through the “AUX In”, “Internet radio” and “Music player” (streaming from computer) functions, also helps to boost the accessibility of this already-simply device. Podcasts are helpfully stored in a sub menu within each radio station’s menu entry, making accessing them similarly easy.

That’s not to say it’s entirely a good thing that more invasive “virtual keyboard moments” don’t crop up in the Stream 105 though. The Squeezebox Radio also offers streaming from a handful of music services including Spotify and Napster, for example. If you’re already a Spotify Premium subscriber this should be enough to make you consider spending the extra £20 on Logitech’s rival.

Roberts is dipping its toe in the world of connected streaming, in a way that doesn’t deviate from the brand’s trad image, and isn’t likely to freak out its long-term fans too much. This is also reflected in the monochrome screen. It’s six lines high, reassuringly blocky and fairly small – but sometimes it’s better when these big-name radio players don’t try to innovate too hard though, as we saw in the Pure Sensia. Clarity of the display is a way off the OLED screen of the Kogan Deluxe, but thanks to the angled screen panel, it’s readable from a couple of metres away. 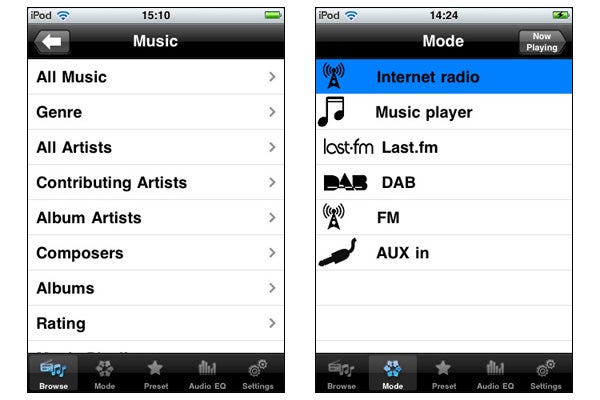 A completely optional techie’s extra is the ConnectR iOS app. This free app lets you control the radio, including adding some equalisation, when connected to the same Wi-Fi network, using an iPhone, iPod Touch or iPad. The app hasn’t yet been optimised for the iPad’s larger screen, but will work using Apple’s standard pixel doubling. ConnectR is no substitute for Apple Airplay (Apple’s own music-streaming standard) but it’s a neat way to control the radio from the palm of your hand.

The Roberts 105 Wave doesn’t quite have the feature set of its Pure and Squeezebox rivals, but it’s in sound quality where a radio either succeeds or fails in our book. Like most small radios, it relies on a single driver responsible for the entire frequency spectrum. One notable exception from this is the Stream 105’s big brother, the Roberts Stream 205, which offers dual drivers and an additional DAB tuner for around £50 extra.

The Roberts conservatism we saw in its approach to music streaming – doing the basic well rather than over-extending itself – bleeds through in its approach to sound. The Stream 105 doesn’t go extremely loud, but as such can withstand its own maximum volume without sounding strained or harsh. This volume level should suffice for most uses, but if you’re going to be doing DIY with the radio piping away in the background, you may find it doesn’t quite cut through enough.

The sound signature is also somewhat unambitious. It sticks to the rather boxy sound characteristic of small radios, lacking much bass warmth or presence, as well as intricate top-end detail. Pure in particular tends to try harder to pack more bass into its radios. It’s a good sound for spoken-word broadcasts, but other radios relay music with more excitement and dynamism. If you want to listen to a spot of Radio 4 while chopping some carrots in the kitchen, the Stream 105 is good choice. 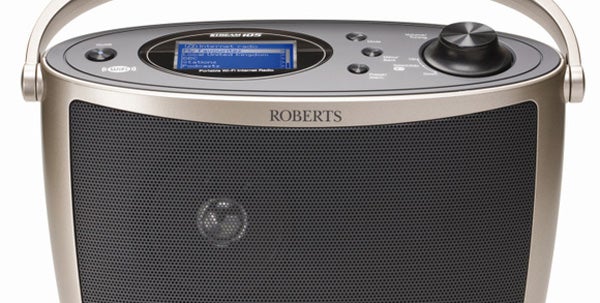 Weighing-up the radio’s price against its feature set, the wheels do start to fall off the Stream 105 bandwagon. The Pure Evoke Flow offers a more stylish design for as little as £15 more, the Squeezebox Radio has bags more online features and the tiddly Pure One Flow retails at the same price but packs-in both DAB and FM tuners.

The Roberts Stream 105 is by no means a bad radio. It sounds reasonably good, offers an intuitive menu system and a portable form factor. However, unless you’re a die-hard Roberts fan (in which case you may love it for its retro radios anyway), we can’t help but recommend you seriously consider one of its rivals.

A portable radio with built-in Wi-Fi is a powerful tool. It can connect to hundreds and hundreds of radio stations and their associated podcasts, as well as streaming a music library from your computer or NAS setup. The Roberts Stream 105’s problem is that rivals offer DAB and FM tuners on top, and older models from Pure, Logitech and even Roberts itself that do more and offer better sound quality are available for the price of a round of drinks more. We’d recommend you lay off the Martini for 12 hours and opt for one of those.