Recent technology trends haven’t been kind to radio. Streaming services like Spotify mean it’s easier than ever to discover new music without tuning into a radio station, but the good old wireless isn’t dead yet. The Kogan Deluxe radio comes with a comprehensive spread of ways to enjoy radio transmissions, with DAB and FM tuners on-board alongside internet radio capabilities – plus an iPod dock.

Australian electronics manufacturer Kogan takes an interesting approach to its products. It cuts out the middle men – the retailers, importers and wholesalers – dealing with customers directly instead. It’s this approach that has made it possible for so many features to be packed into the Kogan Deluxe Wi-Fi radio, while keeping the price at a low £119. 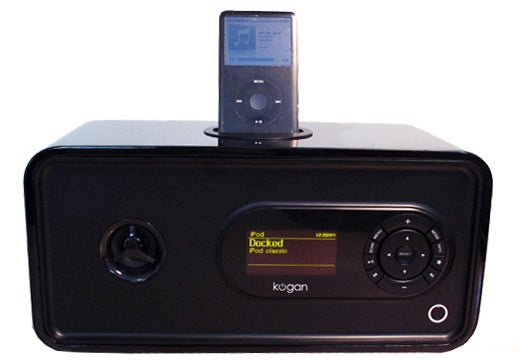 It’ll deliver FM and DAB stations, as well as the tens of thousands available over the net thanks to the built-in Wi-Fi. The internet radio function can also play podcasts and the BBC’s wealth of “listen again” content. To top this off, there’s also an iPod dock on top and an auxiliary input should you be dying to plug in another source. Unusually, a phono audio output is included on the back panel – tantamount to admitting that its own speakers won’t dazzle all and sundry, this nugget of humility is something many manufacturers can’t swallow.

To complement the wealth of options is a very respectable array of drivers. On each end of the device are bass drivers, firing out to the side, while a single tweeter up front doles-out the high-end detail. On the bottom is a bass port, letting Kogan claim the Deluxe radio has a subwoofer – however, the drivers are really the full-range type you’d find in a standard hi-fi speaker. 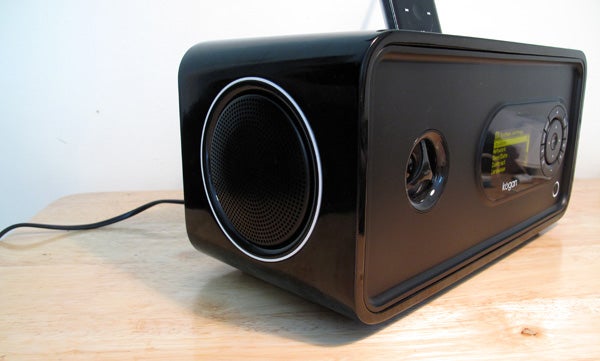 What’s not quite so impressive is the look. The Kogan Deluxe looks a little too much like what it is – a Far East manufactured budget radio here to undercut and outspec the opposition. There’s not much style to the circular button island on its front and the front panel feels a bit thin. The glossy laminated outer shell is as tough as you like, but the inconsistent build and uninspiring aesthetics don’t fool you into thinking this is a top-class device. The Pure Evoke Flow trounces it in the style stakes, but then that similarly-priced set is much smaller and only has a single speaker. 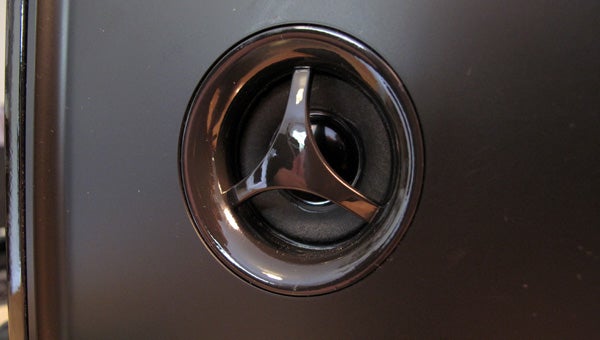 The display is a surprise hit though. It’s a yellow OLED model and is superbly clear. This clarity comes in handy when browsing through the reams of radio stations and podcasts the Kogan Deluxe gives you access to. There’s more navigation involved with a connected radio like this than a standard DAB set and a good display is a must.

When dealing with budget radios and media players, it’s often the interface that suffers most. The Kogan Deluxe radio holds up remarkably well in this area. Searching for particular podcasts or stations can be a pain, as you have to type out any terms letter-by-letter using the front D-pad or remote control, but stick to browsing and you can avoid this entirely. With dedicated categories for BBC content and local stations, we found we could get what we were after 90 percent of the time without too much laborious tapping. 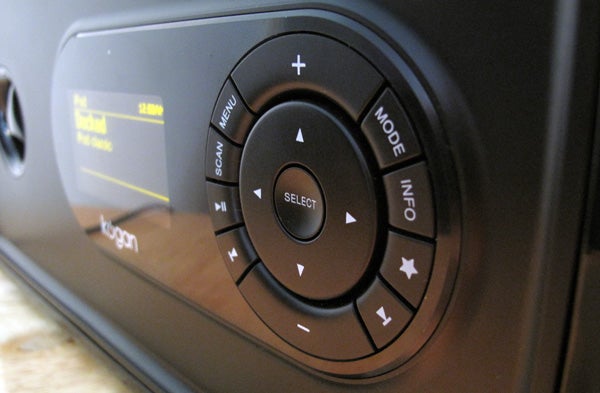 To pick up the more traditional stations, FM and DAB, the Kogan uses a standard telescopic metal aerial. This works perfectly, although we did test the device in a fairly decent signal area. If you’re after the Kogan for internet radio but don’t have a Wi-Fi connection (there must be a couple of you still out there), there’s an Ethernet port on the back to let you hook up with a cable. Once connected, you can also stream music from computers on the same network. 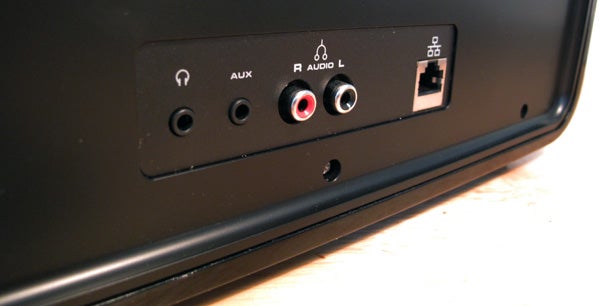 Features-wise, the Kogan Deluxe covers just about everything we could ask of a radio set, even when the extra bits aren’t a great deal of use. It supports DAB+, but this isn’t broadcast in the UK at present. DAB+ offers higher bitrates than standard DAB, and is available in some other countries. It’s probably not worth emigrating for though. 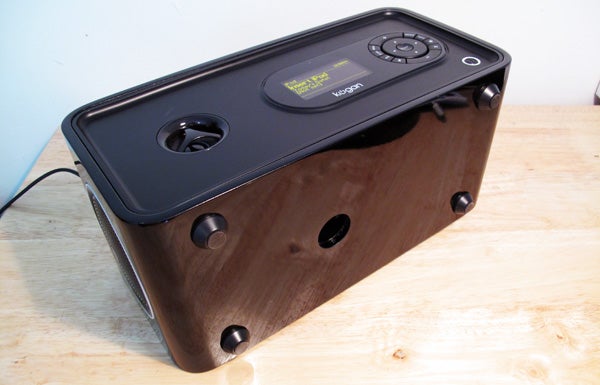 We can dream-up a few additional features we’d appreciate, like Spotify and Last.fm streaming – which feature in the Squeezebox Radio – but the sheer amount of content on-tap here is nevertheless staggering. A basic remote control is included, so you can surf through it all at a distance rather than being tied to the front physical controls.

The Kogan Deluxe radio is a little large to function as a bedside alarm clock, but it will do this if you need it too. It’ll wake you up with a preset radio station, so you don’t have to stick with a traditional ear-battering alarm tone.

With oodles of features and more speakers on-board than any other internet radio at the price, the Kogan Deluxe radio sounds like an unbeatable bargain. However, it loses points in the most important area of all – sound quality.

Thanks to its decent-sized drivers and side-mounted design, the scale of the radio’s output is predictably decent. Most other wireless internet radios sound, and are, smaller than this set, but there’s not a great deal of fidelity to be heard here. There may be a dedicated tweeter, but high-end detail is minimal. 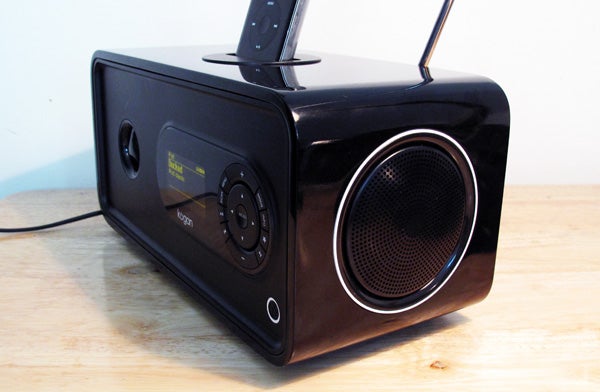 It’ll fill a room easily enough, but at low volume levels it doesn’t have the crisp sound you’ll find in some other sets like the Pure Evoke and Logitech Squeezebox Radio.

This is a shame because with better sound quality, the Kogan Deluxe’s feature set could let it take over from a hi-fi system as your main music source. As is, we’d only take this on as a secondary or bedroom unit. Are there any devices like this that can do that? Not really – high-end iPhone docks don’t tend to bundle-in DAB or internet radio functionality, and those that do, like the £500 Denon CEOL, are a different proposition altogether. 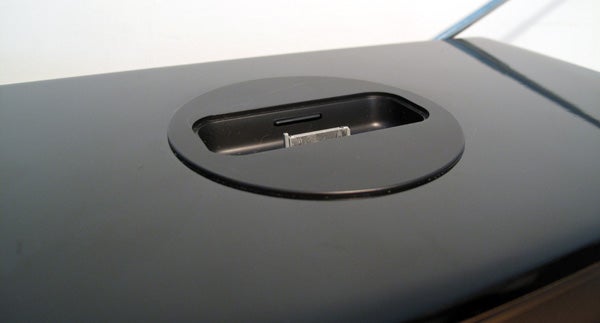 At £119 though, the Kogan Deluxe remains a great-value option. The phono output means that if you’re desperate for top-quality sound, you can always plug it into a dedicated amp and speaker setup. We can’t imagine many buyers will do this though.

The Kogan Deluxe Wi-Fi radio offers loads of features at a very attractive price. It’ll play your iPod’s music, FM and DAB radio, plus the tens of thousands of web radio stations. It’ll stream music from your PC and play podcasts too. Thanks to the great OLED display, browsing through all this content isn’t too painful either.

However, pretty average sound quality and a rather bland design take the shine off a little, making sure than this box can’t quite claim to bury bigger-name rivals like the Pure Evoke Flow and Squeezebox Radio.