The world of internet radio is dizzying. Right now, tens of thousands of internet radio stations are spewing out content into the ether – more than you would realistically ever listen to. Like staring up into the night sky for a bit too long, it doesn’t half make you feel small. The Logitech Squeezebox Radio is one of the best ways to unleash this constellation of content into your bedroom, kitchen or living room.

The Logitech Squeezebox Radio is the most traditional-looking device of the entire Squeezebox range. Half control panel, half speaker grille, its front looks much like any portable DAB or FM radio. It’s shinier than most though, its outer layer made of glossy black plastic. This finish shows up fingerprints and dust as if it was one of the box’s key features, but keep it clean and dusted and it’ll look the business. It’s also available in red and white finishes. 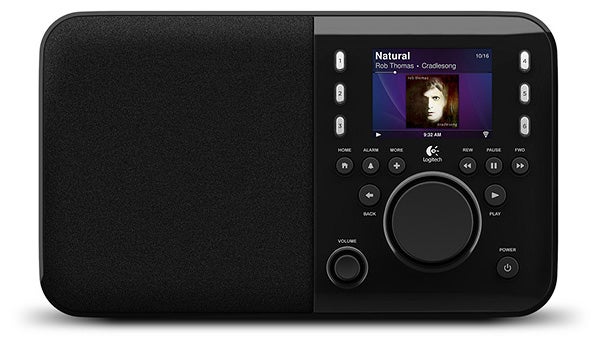 Surrounding the 2.4in colour screen are six silver station preset buttons that’ll tune in to your favourite stations wherever you are in the interface. They can also be used as shortcuts to albums or artists within other features, like Spotify or your computer’s music library.

Below these are rubber playback buttons and others to help your navigate through the Slingbox Radio’s menus. As there’s much more searching and setup involved here than with a simpler DAB radio, how easy these menus are to navigate is hugely important. The control you’ll keep coming back to is the great big rubberised main dial. It’s used to zoom through menus and input search words. It feels less cheap than the surrounding playback buttons, with a firm clicky action rather than the spongy, less definite style of the nearby playback keys.

All the Squeezebox Radio’s controls are on its front – 17 in total – but the near-symmetrical arrangement used stops the interface panel from looking too busy or cluttered. It offers fewer ports than the other players in the Squeezebox series, the Squeezebox Touch and Boombox, but that’s no great surprise when it costs almost £100 less than its brothers.

There’s a headphone jack on the side, plus an additional 3.5mm input on the back, alongside an Ethernet port if you’d rather not use the built-in Wi-Fi. A neat little carry handle is built into its back – which will come in especially handy if you fork out for the additional battery pack and remote control accessory combo (which sells for around £45). The battery fits under a screw-in panel on the bottom, and will give you six hours of playback. 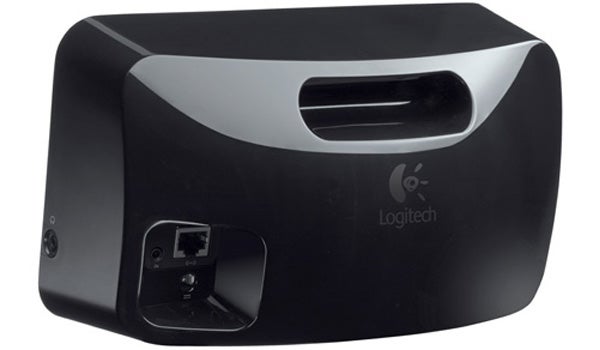 Ideally, we’d like to see an additional optical output and a SD card slot or USB port to let you play your own MP3s, or even an FM radio so you’re not left in silence should you be left without nearby Wi-Fi connectivity. But we’d never argue that its existing feature set doesn’t offer good value for money.

The Squeezebox Radio will gives you access to thousands of radio stations, podcasts, the BBC’s Listen Again content – as well as Spotify’s library (as long as your have an account), Last.FM, any shared music on your computer and more besides. There’s a distinct attraction to the simplicity of more basic, non-connected bedside radios, but the scope of what’s on offer here is quite staggering if you can cope with the extra button clicks involved.

The Squeezebox Radio doesn’t have a touchscreen, so navigating its menu system has a rather traditional feel, and is controlled by the large rubberised button in the centre of its control panel. The main menu offers links to key features such as your computer’s library and Internet radio.

A fistful of additional features can be added to the device with the built-in app store. Let’s be clear – this isn’t the iPhone App Store we’re dealing with, as there are tens of apps available, not tens of tens of thousands, but most of the things we’d look for are here. At the top of the list is Spotify, a brilliant addition to this box’s roster. Also on hand are Napster, Deezer and Last.FM, while apps for separate sets of stations also let you organise your Squeezebox Radio more keenly.

The BBC radio app is particularly welcome, enabling you to flick to a stream more quickly than using the default Internet Radio interface. Although these apps all rely on pulling-down results and information from online, they’re remarkably quick to operate. We tested the radio with a standard 20MB home broadband connection and were presented with a mostly lag-free, slick experience. 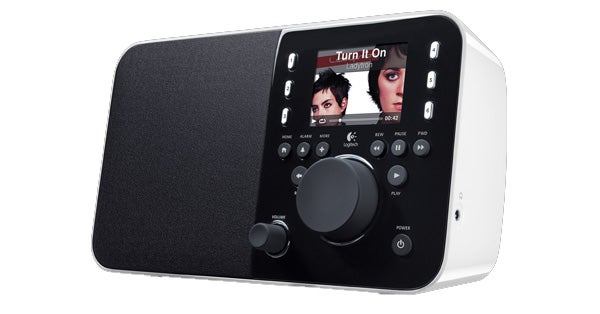 The only real downer to using these streaming services that rely on searching more than casually browsing – thanks to the massive libraries on offer – is that you have to input text letter-by-letter using the control dial. It’s mercifully responsive, but it does leave you longing for a keyboard accessory or touchscreen virtual keyboard. This effect doesn’t pop up when scrolling through your computer’s music library or browsing radio stations, as dial navigation feels right at home here, not far removed from using the touch sensitive circular panel of an iPod Classic.

Navigational woes can be eased somewhat by clever use of the six silver preset buttons. As long as you’re currently streaming or browsing though some form of content, be it a radio station, artist on your computer’s hard drive or an album on Spotify, a long press on one of these silver buttons will link it to this content. A quick tap on it at any point will take you right back there.

Updates are applied to the box directly over Wi-Fi, so the only communicating it really needs to do with your PC is when streaming music from its hard drive – and even then the setup process for this happens on your computer rather than the Squeezebox Radio. Just make sure your music is set to be freely shared on your computer, which needs to be on the same Wi-Fi network and turned on – it should show up within the Squeezebox menu.

While the menu system is easy enough to get to grips with, it’s not entirely bug-free. During out testing, some of our icons started randomly disappearing from the main menu, but these problems were sorted with a factory reset. The Squeezebox software is some way off the watertight quality of Apple’s iOS system, but it is fast and does work. You’ll just need to employ a little patience every now and then.

Like most radios of this size, the Squeezebox Radio is a mono device. Hidden behind the near-opaque speaker grille are a 3/4in tweeter and 3in woofer driver. Given its petite dimensions, the sound produced is impressive.

It’s detailed and rich, without the harsh high-end we feared might come from such a petite box when the volume’s dialled-up. Naturally, with just two drivers to produce the full range of sound, bass isn’t thunderous but it too impresses once the dimensions are again taken into account. If you need a Squeezebox to become your main hi-fi unit, you’d be better off with a Squeezebox Touch outputting into separate speakers via the optical audio outputs, but for anything less ambitious the Radio is up to the task.

The Radio is naturally more positional and small-sounding than a full stereo setup, but the sound belies its stature – yes it’s a phrase often trotted-out in reference to little radios like these but it outclasses most bedside-style models. If you want to give its sound a boost without upgrading to a Squeezebox Touch, you could splash out on a pair of powered monitors or PC speakers as the headphone output is stereo, not mono.

The Squeezebox Radio may be a little more expensive than Pure’s cheaper DAB radios, but this box does a whole lot extra – while Pure’s Internet Radio solutions like the Evoke Flow and Oasis are actually more expensive. This low-end model also offers more connected features than the Squeezebox Boom – having been released a year later its feature set is virtually in-line with the Touch model. 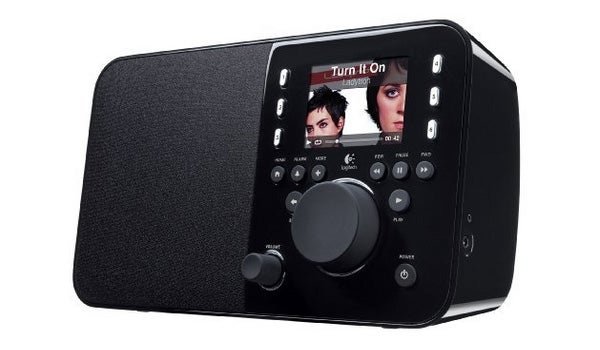 It’s missing a few advanced features we’d have loved to see included, chiefly a full optical audio output, but the amount of content this device gives you access to – without needing a computer – is mind-boggling.

Offering an amazing feature set at an excellent price, the Squeezebox Radio is one of the best Internet radios around. With a colour screen and access to bonus services like Spotify, it simply does more than most rivals, for less outlay. And while it’s petite, the sound it produces isn’t. We wouldn’t expect it to replace a full hi-fi setup, but for a bedroom or kitchen unit you can’t do much better.