The Roberts R100 is a multi-room ‘base station’ that can just as happily be used as a simple DAB kitchen radio.

Unlike Sonos kit, it’s not closed off from other devices, and doesn’t have to be controlled from your phone. It’s a meeting of the old and new(er) worlds of home audio.

The Roberts R100 costs £249, making it expensive for a radio, but reasonable for a multi-room speaker with all the features it offers. Still, the Sonos Play:1 sounds better.

Tech fans might find the Roberts R100 familiar. It’s the stylistic progeny of the Sonos Play: 1 and the B&O BeoLit 12 from way back in 2012. That last one is a lovely speaker, but at £600 has a fairly narrow, affluent audience in mind.

Aiming right at the mainstream buyer, the Roberts R100 wants to replace your DAB radio and your hifi. It’s not quite as it appears, though.

The carry handle screams “I’m portable”, but there’s no inbuilt battery. You can get one, but it costs an extra £40, almost enough to bump the Roberts R100 up into another price class. 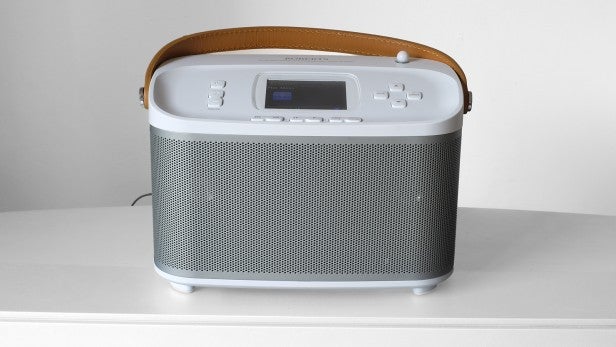 It’s neat hardware, though, doing its best to balance the priorities of practicality and flat-out looking nice. There’s a real-metal grille that winds around the R100’s sides and back, a real leather carry handle, and the rest is plastic.

Having a slanted control panel of buttons and a display on the top means the Roberts R100 isn’t a beauty, but this layout is handy. Roberts may sell this as a multi-room base unit, but it has the accessibility of a DAB radio.

There’s no fiddly touchscreen either, just a pretty intuitive series of buttons matched with a familiar, perhaps even off-the-shelf software interface. A radio-style aerial extends out of the top plate rather than the rear too, meaning you can push the R100 right against the wall if needed. 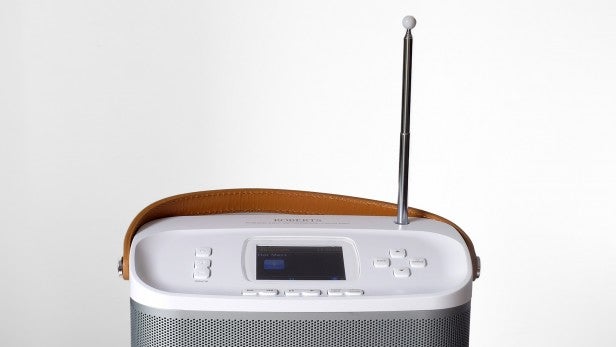 The Roberts R100 is not super-small, but its footprint is similar to a Roberts Revival radio, for example. It should fit onto windowsills and kitchen worktops if that’s the space you have to fill.

The R-Line series of speakers is a bold move for Roberts, but its abilities are familiar. This is a wireless speaker, but one much more open than something like a Sonos. It can play audio from a very diverse range of sources.

There’s Spotify Connect, Bluetooth, streaming from collections shared over Wi-Fi, Internet radio, DAB radio and FM. A 3.5mm socket on the back lets you plug-in non-wireless sources too. 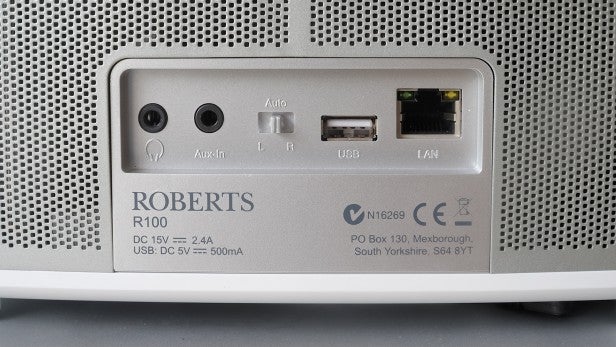 The Roberts R100 has a friendly, old-fashioned side that you just don’t get with a Sonos speaker. However, if you don’t use Spotify this does mean you’re left using Bluetooth as there’s no more specific support for Deezer, Tidal, Google Music or anything else.

There is a smartphone app for this speaker. It’s Undok, a third-party multi-room platform rather than one made specifically for Roberts gear. I’ve only used one other brand that has used it so far, Goodmans with the Heritage Portable radio, but Revo, Ruark and Bush are other recognisable Undok clients.

Undok is what turns a normal Wi-Fi speaker into a multi-room one. The tech lets you group together others speakers in the Undok-supporting family together to create a multi room system. It’s not as impressive software as Sonos’s, which is much more stylish and crams in more streaming services, but works very well. It’s quick, it’s clear and it lets you more-or-less control every main Roberts R100 feature. 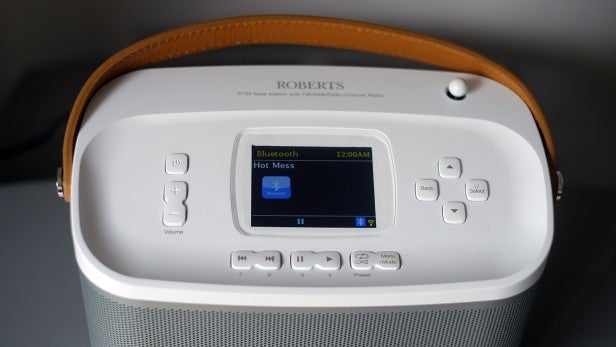 You can switch between sources, even the aux input, and it’s a far better way to browse internet radio stations, which seem endless when you’re scrolling through them on the fairly prosaic on-speaker interface.

The Roberts R100 is a multi-room speaker where the ‘multi-room’ bit is a nice extra rather than a feature that sits front and centre. 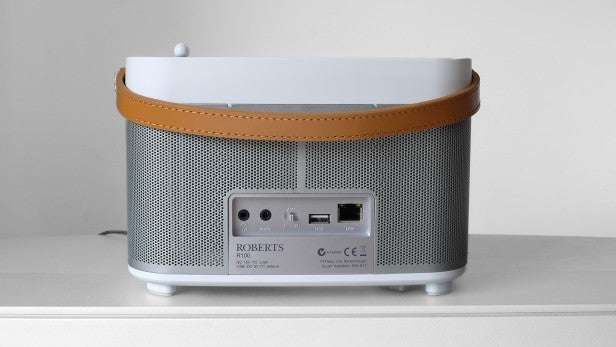 This speaker is just part of the Roberts R-Line multi-room family. There are already several other models, including a soundbar and others that look like more conventional wireless speakers.

The R100 is the most DAB radio-alike of the lot. Sound quality is mixed across the range, but good on this specific speaker, which is able to go much, much louder than any traditional DAB radio.

This is the sort of radio I have been awaiting for a while, something roughly comparable with a classic DAB set that uses the tricks of modern wireless speakers to produce a much larger sound. 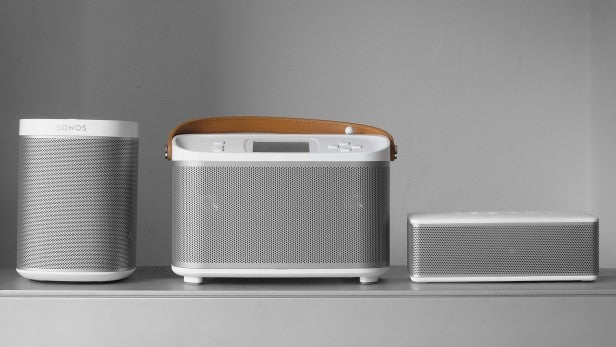 The difference? Where a classic radio this size might use one or two (up to) 3-inch drivers, the Roberts R100 has two small treble drivers, one large bass driver and a bass radiator. This uses the air moved by the big driver to push yet another flat driver that amplifies bass. It’s what makes getting good bass out of a tiny little speaker like the Bose SoundLink Mini possible.

I’ve happily been using the Roberts R100 as my main day-time music listening speaker for a week or so now, and it just doesn’t have the sense of sound compromise you get with even the best traditional DAB radios.

However, it doesn’t sound good straight out of the box. The Roberts R100’s default DSP (digital signal processing) is quite horrible, with a wilfully over-emphasised treble that makes it seems like the bass/treble drivers are not just poorly integrated, but at war with each other. This tends to make higher-register vocals sound quite acidic. 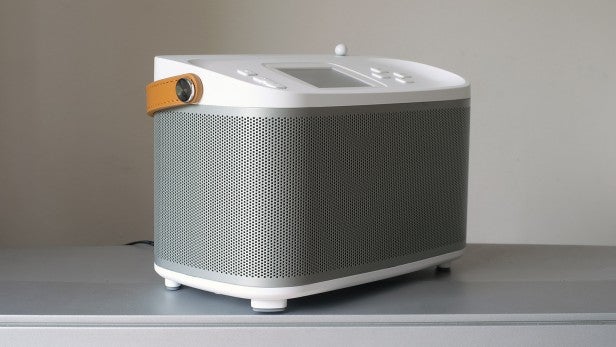 It is all just over-enthusiastic equalisation (and compression by the sound of it) from a company a bit too new to ‘proper’ wireless speakers. There’s an EQ section in the Settings menu that lets you take this harsh edge off. Even some of the other presets are much easier on the ear, but you can also set your own custom EQ. This is what I did — there are only bass and treble settings so tweaking is easy.

Other than the enjoyable tone you can get out of the Roberts R100 post-tweak, what I like about the sound is the scale and depth of bass the speaker can produce for its size. It’s clearly a lot larger than the small Bluetooth speakers common in the sub-£200 bracket, but unlike most passive radiator setups even has a go at creating sub-bass frequencies.

There’s a clear drop-off in amplitude when the R100 gets to the sort of ultra-low frequencies you only really hear separated in electronic music, but most other speakers cut these out altogether to avoid distortion. The Roberts R100 can go very loud before it starts sounding strained, loud enough that I didn’t dare to stress it for too long for fear of annoying the neighbours.

It could be all you need for a party. 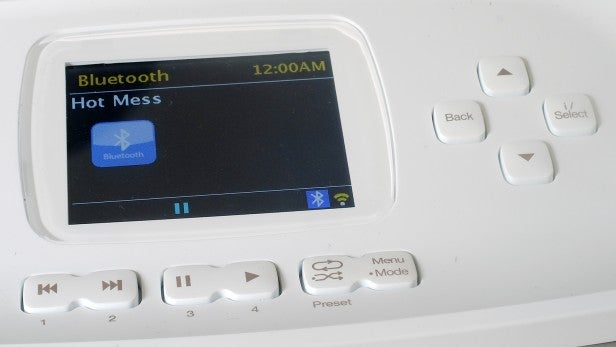 After fiddling with the sound, the Roberts R100 is a good, but not class-leading performer. It sounds big, powerful and assured, but as with a lot of speakers like this, relies quite heavily on the top and bottom end to give sound presence and power.

Listen closely to a good middy vocal like Jarvis Cocker’s work on Music from Likely Stories and you can hear it consists largely of quite bass frequencies and lower-register treble sandwiched together. The mids that should actually play a huge part here, don’t. Not many speakers at this level do that much better, many much worse, but the Sonos Play:1 and the little-known (but excellent) Riva S have more convincing mids.

Should you buy the Roberts R100?

There are signs Roberts is new to the wireless multi-room speaker market in the R100. Its default sound profile is gratingly bad and it has rather rudimentary wireless software behind it.

However, this is ultimately a very likeable, practical speaker that could be a great next step for people who haven’t yet bought into the wireless speaker world. It’ll only take up about as much space as a DAB radio while still having DAB and far richer, bigger, louder sound.

It’s a pity it costs so much more than the Sonos Play:1, which has better mid-range and a slicker take on wireless. But then the Roberts R100 offers something quite different. They may be both wireless multi-room speakers and the R100 may be aping its look, but after that they diverge significantly.

A friendly and loud wireless speaker for those not ready to leave DAB radio in the past just yet.