Bang & Olufsen is known for its enticing designs and off-putting prices. With this godawful recession on, we can imagine more people being put off by high pricing than ever. But B&O is moving with the times, and has launched the new “affordable” B&O Play range – its first offspring the Beolit 12 portable Airplay speaker. Selling for around £699, it stretches the notion of affordability, though. More expensive than the B&W Zeppelin Air and Arcam rCube, can it possibly be worth it?

The usually-ostentatious Bang & Olufsen has gone all Bose on us – the B&O Play Beolit 12 is all practicality, albeit with a high price tag. It’s a portable Airplay speaker with a built-in battery that will last for around 3 hours when using Airplay, or up to 8 when using the 3.5mm auxiliary jack.

The Beolit 12 looks rather like a lunchbox. A solid rectangle of metal and soft-touch plastic that you carry around using the leather strap, it’s a way removed from the design-led BeoSound 8 – which we reviewed at the beginning of 2011. It may seem like a new direction for Bang & Olufsen, but it’s actually a return. The Beolit range of radios existed back in the 60s and 70s, and looking back the design DNA is clear here.

These days, though, FM and even DAB are seen as a little old hat by many – and the low quality of the DAB signal in the UK doesn’t exactly fit with Band & Olufsen’s supposed audiophile image. The Beolit 12 instead rejects the old meaning of wireless and picks up the new one, streaming over Wi-Fi.

It comes with built-in Wi-Fi, naturally, and connects with iOS devices in the usual Airplay manner. Alternatively, the USB port on the side can be used to connect in a wired manner with iOS devices – while charging them – and the standard 3.5mm jack is on-hand for all non-Apple audio fodder. 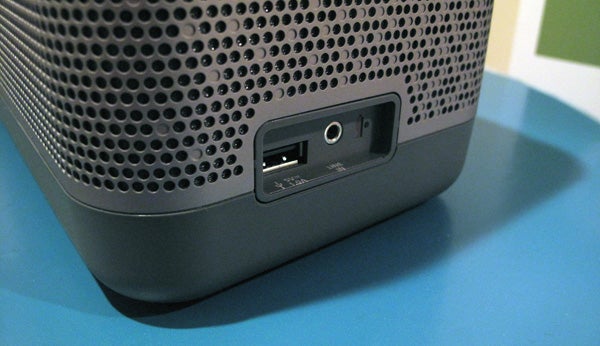 The top of the Beolit 12 is a recessed tray coated in rubber, where your devices of choice are meant to rest while playing. As you can see in the photos, it’s a surface that picks up dust and other nasty bits very readily, but this is a nice addition that demonstrates a careful approach to design.

At the left end of this rubber tray sit the physical controls. There are volume controls, an Airplay button and the power button. From the front, you can’t see these buttons.

The care and attention that has gone into the Beolit 12 is clear, but there are some elements not everyone will like. Its speaker grille, a chunky aluminium affair, gradually fills-in along its side in a way that looks a teensy bit 80s and it can be argued that the plastic construction doesn’t fit the £700 price. Quite what construction would be fitting in a £700 portable speaker is a toughie, though.

Around the back of the Beolit 12, there’s a flap that opens-up to reveal the power socket, Ethernet port and an empty expanse. At first we assumed this is where the battery would go, but Bang & Olufsen corrected us – the battery is built-in and non-removable.

This recess is to store the power cable and any iOS connection cables you may want to stash. We’re not entirely sure whether there’s enough room in there to fit the chunky UK plug though – and neither was the B&O representative. A potential iceberg on the horizon here, folks. 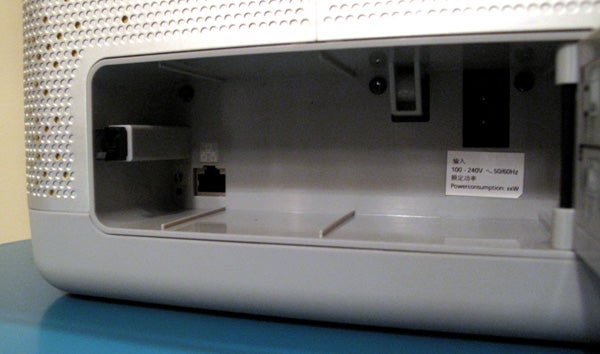 Behind the aluminium grille, the B&O Play Beolit 12 packs three drivers, two 2in tweeters and a 4in mid-range driver/sub. The amp powering the show is a 120W class D model, more powerful than the 90W Arcam rCube.

The sound is more powerful too. While the Beolit 12 boasts a sweet and smooth top-end, there’s a decent amount of bass welly given the fairly small size of its drivers. This is certainly one of the best portable iPhone speakers of this size we’ve heard – but then again it’s also the most expensive. By quite a long way. And at this size, it’s no suprise its sound of of sub-audiophile quality, with a fairly “scooped” sound, seemingly lacking mid-range presence in our demo. 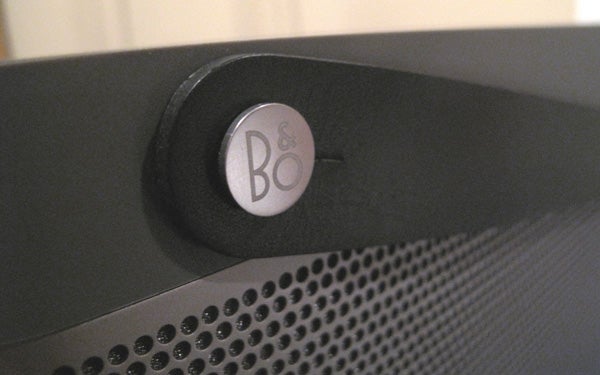 We’ll be back with more sound impressions of the Beolit 12 in our full review, but it’s a given that any buyers will have to swallow the truth that the price-to-sound equation here will never quite add up. After all, this speaker costs twice the price of the Bose SoundDock, and Bose is not renowned for its bargain-tastic prices.

From our brief time with the Beolit 12, we preferred its slightly brighter sound signature to Bose’s warm thuddy style, but there are a lot more top contenders in the portable speaker game than just these two. We’ll be back with more on the B&O Play Beolit 12 in our full review.

A classy design packed with thoughtful touches, the B&O Play Beolit 12 will kindle gadget lust in a way very few portable speakers manage. But at what price? Selling for £699, it costs more than the top-end Bose SoundDock 10, and twice the price of the Arcam rCube. As lovely as it may be, the B&O Play range isn’t going to open up the Bang & Olufsen to the masses with the Beolit 12.