What is the Goodmans Heritage Portable?

The Goodmans Heritage Portable is a classy, feature-packed radio. It has the look of 1960, the features of 2016.

Just as it seemed DAB radios were starting to stagnate and die, Goodmans has come up with one of the best small radios to date, in some respects. It has a dazzling array of features and a simply lovely design.

At £169 it’s not cheap, but can easily go head-to-head with the best from Pure and Roberts. However, bass handling that can’t touch the better small wireless speakers holds it off our highest scores. 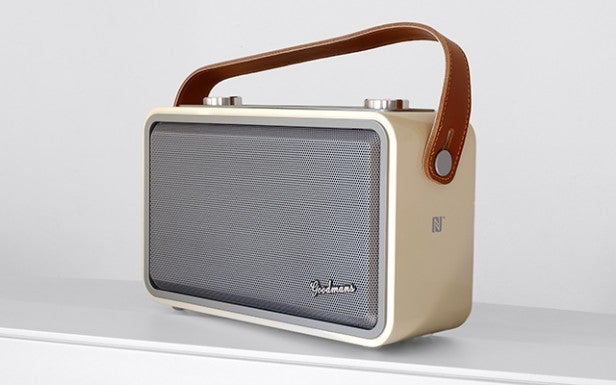 Ask your grandparents about Goodmans and they may remember it as a quality, reliable brand. However, for the last 20 years Goodmans has made mostly cheap goods intended to be piled high and sold cheap. In your brain’s brand directory, it may sit alongside Alba and Bush. You’ll buy from these brands because of the low prices.

The Heritage radio shows Goodmans is trying to get back to its glory days. It’s not just about the retro-style logo, this is one of the loveliest classic-style radios available. Put it next to a Roberts Revival or a Pure Evoke and it’ll hold its own.

Not all of this comes across in the pictures. Plenty of companies have made cheap radios that lean on a retro design to make them seem ‘fancy’. 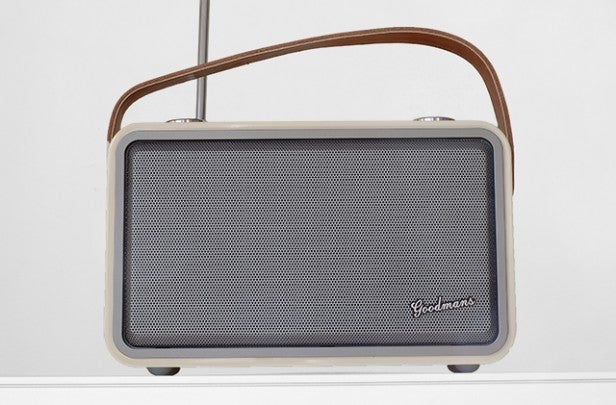 The Goodmans Heritage Portable is the real deal, though, It has a lovely lacquered real wood cabinet, making it feel solid, and there are no parts to it that mark it out as the cost-cutting Goodmans fodder I was half-expecting. There’s a bare wood finish version as well as the cream one I’m reviewing.

Its buttons don’t feel cheap, the two main control knobs are metal and have a nice turn action, and the visual design simply works. Making a coherent retro look that isn’t a pure copy of something else isn’t easy, but Goodmans has pulled it off.

Unlike a Pure Evoke or Roberts Revival, the battery comes inbuilt too. This is probably the most ready-for-2016 classic radio I’ve seen. 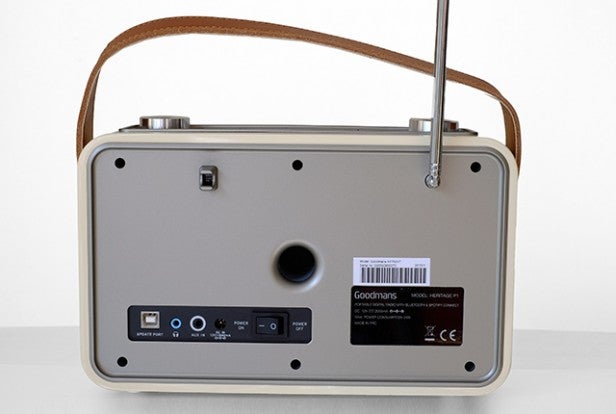 The look of the Goodmans Heritage Portable is pure DAB radio, as is the monochrome LED screen on its top. It could have been lifted straight from one of Pure’s top sets. However, its other features are up-to-date.

There’s Bluetooth, letting you stream audio from your phone or tablet, and NFC to make pairing with (most) phones even quicker. You just place a compatible phone next to the NFC logo on the right side and the two will try to pair-up.

Wi-Fi is what unlocks a whole other side to the Goodmans Heritage Portable. It can stream internet radio, use Spotify Direct and stream tracks from laptops or NAS drives with shared media on the same network. 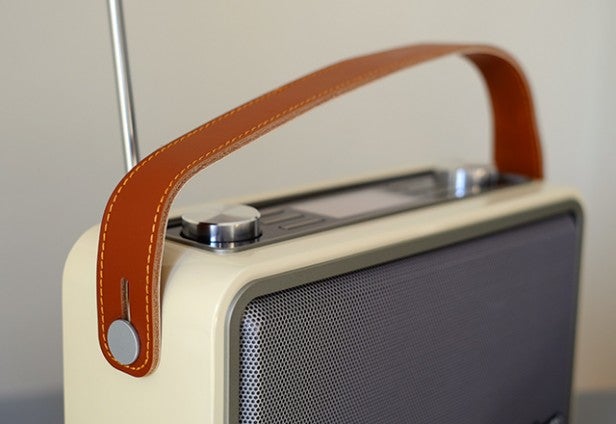 The Heritage Portable has a genuine leather strap

You switch between DAB, Bluetooth and so on using the Mode button on the top. It’s simple, although does mean flicking through the lot if you accidentally press the button one too many times.

For those not fully signed-up to the wireless music revolution, there’s a 3.5mm socket on the back and an FM radio. I find the DAB feed a bit patchy unless you at least flip the aerial up, unlike some DAB sets. The Goodmans Heritage Portable has a full telescopic aerial, but you should only need to use the full extent of the thing if the DAB signal is rubbish in your area.

Who wants an aerial that looks like it’s reaching for the ceiling, right? 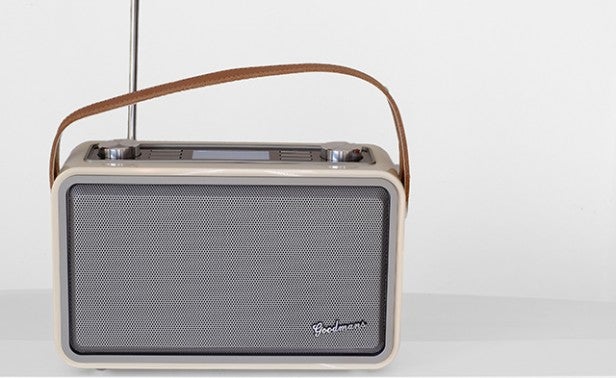 Lots of higher-end radios have Wi-Fi and Bluetooth streaming these days. The part that impresses me is how elegantly Goodmans has incorporated the battery. It’s not an optional extra as it is in Pure radios, and doesn’t make the Heritage feel too heavy.

It lasts for around eight hours between charges, which is enough for most uses if not quite as good as the extra battery Pure offers. The Goodmans Heritage Portable uses a standard cylindrical plug adaptor rather than the microUSB style used in phones. 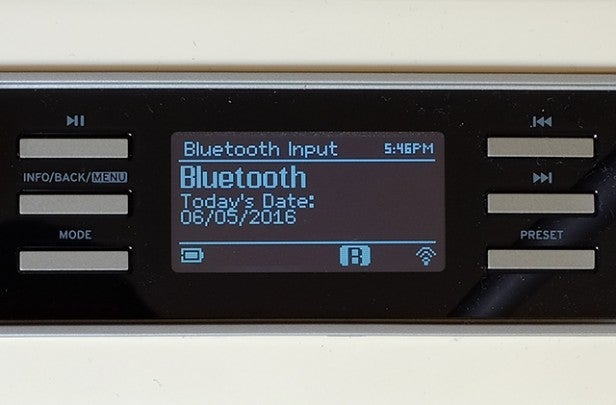 But after some time with the device I found it really is pretty impressive. The Goodmans Heritage Portable uses a multi-room platform called Undok rather than a proprietary system, which almost every other multi-room maker uses to lock you into its system. The more people use Undok the better as far as the buyer is concerned. Roberts Radio may be an arch rival for this particular product, but its new R-Line speakers use Undok too.

A lot of nice DAB radios have been released over the past 15 years. However, even the better ones usually subscribe to radio sound ‘aims’. They tend not to go all that loud, and don’t provide much bass. This sort of sound fits with limited-quality DAB stations well, but much smaller Bluetooth speakers make them sound wimpy by comparison.

Radios like the Goodmans Heritage Portable and Pure Evoke F3 try to bridge the gap. Their sound ambitions are those of a small hifi, not a small radio. That means more volume, more welly. This is a fine-sounding radio that goes loud enough to supply music for a BBQ or, for the serially unembarrassed, to get you dancing around the living room.

Sound quality is light years better than the Goodmans Go Dash I reviewed last year. It is pretty bad. This is one of the better-sounding radios of this size, faring particularly well at low and mid-level volumes. It has detailed and properly contoured sound, where some radios can sound as though they only ever aim for a vague approximation of the source material. 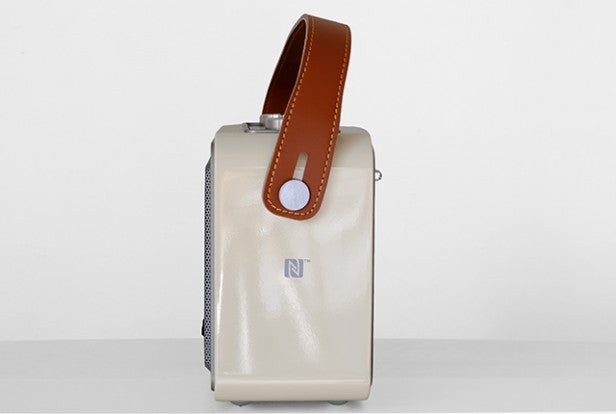 However, Goodmans hasn’t put quite enough optimisation into the radio to make it sound as good as it could. First, the bass becomes distorted the sound is busier, making kick drums sound like someone bouncing a small beach ball on the floor. It’s not the crackly, popping distortion that might initially come to mind, but it’s still distortion.

Clever speakers carefully modulate the levels of certain frequencies to avoid this, but the Goodmans Heritage Portable doesn’t.

The big issue being that a smaller ‘solo’ speaker like the Bose SoundLink Mini II offers much more powerful bass because it uses a passive radiator. This re-uses the air pushed out by the main drivers to move a specially-designed bass unit.

Here you just get a bass port, which is much more conventional, leaving the Heritage with bass that doesn’t match the quality of the mids and treble. 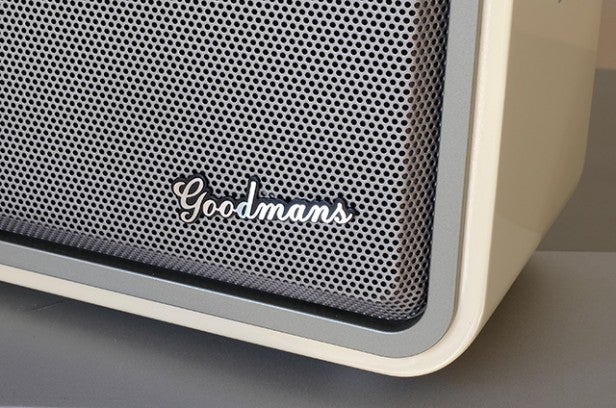 Fresh out of the box the sound is also too trebly. Goodmans wants to show off how clear the Heritage Portable sound is, that this isn’t a muffled-sounding mess. However, with some material it’s a bit sharp and grating.

There are ways to fix this, though. The Heritage Portable has EQ modes that let you alter the bass and treble. I fine the Heritage sounds best at -4 to -6dB on the treble, which really smoothes-out the top-end without making the sound at all murky or even trading away any much detail.

You can’t really touch the bass EQ settings (aside from reducing them) as it exacerbates the bass distortion issue. 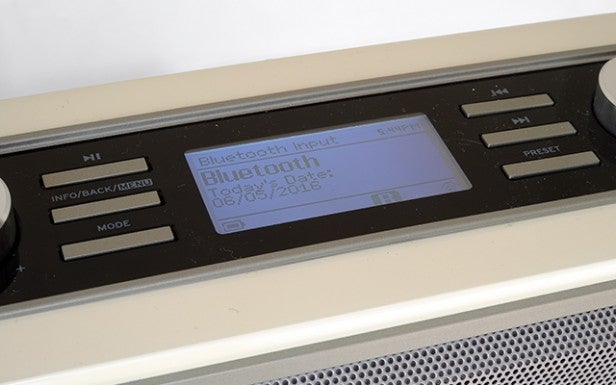 Keep the Goodmans Heritage Portable to the sort of sound levels on offer in other radios of this size and the sound is very good. It’s just that Goodmans has given the little guy the ability to go much louder, without instilling it with the knowledge/DSP to do so properly. It’s such a shame: after fiddling with the EQ I got it to deliver a very pleasant sound, aside from the bass issue.

The Sonos Play:1 will destroy it at higher volumes, for example (and all volumes, to be honest). My new favourite micro speaker the Riva S also delivers far better bass. They’re totally different kinds of devices, though. The clearest rival I’ve used is the Pure Evoke F3, which isn’t quite as loud and doesn’t have the same cute retro angle, but has a more consistent sound.

Should you buy the Goodmans Heritage Portable?

The Goodmans Heritage Portable is such a great radio in so many respects that its issues are really quite heartbreaking. Lovely design, build B&O might charge you double for and loads of features make this almost everything I want in a premium radio.

There’s still some work to do on the sound, though. While the Goodmans Heritage Portable has the sound scale and volume of a small hifi rather than a small radio, its drivers and bass port can’t handle certain bass frequencies, and the DSP isn’t clever enough to stop them reaching the driver. What results is low-end distortion that spoils the otherwise good sound quality with some music.

This needs context, though. Without this distortion the Goodmans Heritage Portable would be good enough for a lot of my casual music listening. Distortion considered, it still compares favourably with other sets in its class. It’s just a pity one of its strengths highlights its big weakness so clearly.

The most desirable thing Goodmans has made in years, this is a lovely radio and mini hifi, but one let down by bass distortion.