Resident Evil 3 is a bit of a disappointment. It’s still a gorgeously spooky time, but one that is marred by an overly brief campaign and a so-so multiplayer component that doesn’t reach the standard we’ve come to expect from Capcom in recent years.

The “Capcom Renaissance” has become a common term amongst the gaming community in recent times. After a few years in relative obscurity and lacking the blockbuster power of generations past, the Japanese publisher came out swinging with hit after hit, whether it be the stellar Resident Evil 2 Remake, Devil May Cry 5 or the absurdly popular Monster Hunter World. Everything Capcom touched turned into gold, but can it do the same with Resident Evil 3?

Coming just a year after Capcom remade its predecessor, this feels both sudden and welcome, but does it do enough to stand out from the masterful reimagining that came before it? It sadly doesn’t reach the same heights thanks to an incredibly brief campaign and underwhelming multiplayer in the form of Resident Evil Resistance.

I can’t fault the ambition of Resident Evil 3. Still, those only interested in the solo experience will inevitably feel short-changed, and the online portion is currently scrappy, unbalanced and hard to recommend. That said, there’s still a lot to love about Resident Evil 3 once you cut through the undead chaff. 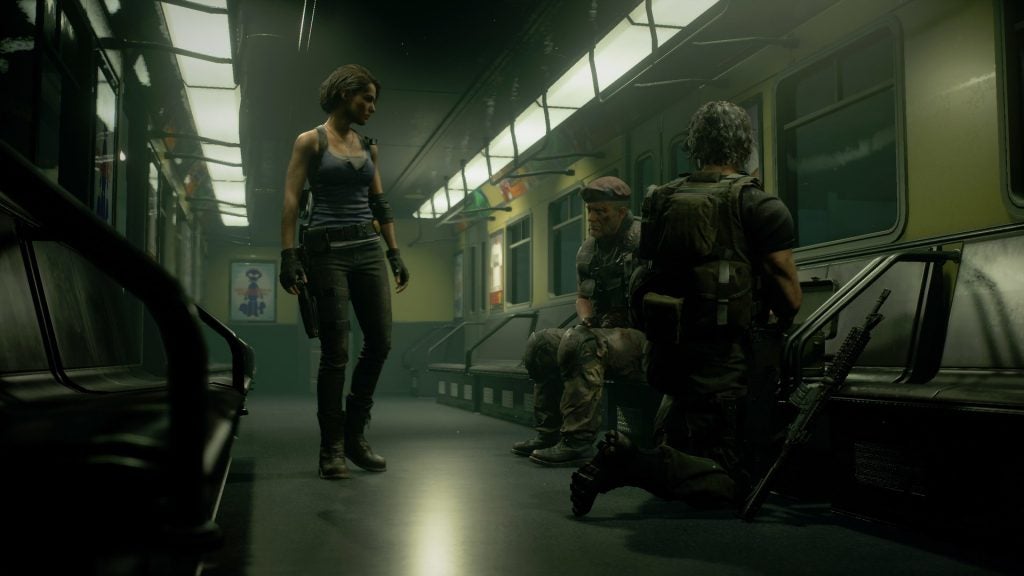 Resident Evil 3 follows the plot of its 1999 original rather closely, yet chops and changes certain events, so the campaign flows in a more cohesive, action-packed manner. The story once again follows Jill Valentine as she seeks to escape Raccoon City amidst the chaos of a zombie outbreak, while also trying desperately to uncover the truth behind a sinister corporation known as Umbrella. Fortunately, she isn’t alone in this mission.

Our heroine is joined by Carlos Oliveira, a dreamy member of the Umbrella Biohazard Countermeasure Service, a special service tasked with delving into the city and bringing the situation under control. He’s got his work cut out for him, and will soon come to learn the sinister truth behind his employers. Working together, Jill and Carlos find themselves pulled into a conspiracy-ridden plot spanning the entirety of Raccoon City as they descend into underground labs, abandoned hospitals and other horrific locales.

But Jill and Carlos aren’t alone. They’re being pursued relentlessly by Nemesis. This unstoppable bioweapon has been engineered to eliminate all members of S.T.A.R.S, a contingent of the police force with intimate knowledge of Umbrella’s actual plans. He’s a relentless nightmare – ambushing Jill in the campaign’s opening moments and not giving up until the very end.

Sadly, he isn’t implemented in the way I would’ve liked, acting as a regular boss encounter instead of a procedural shadow who can burst around the corner at a moment’s notice. Nemesis is no Mr X, which is a huge disappointment. The fleshy demon isn’t an unsettling spectre, unveiled with all the subtlety of a nuclear bomb that it’s hard for him to truly get under your skin. The majority of his encounters outfit Jill with so much firepower you’re an equal match anyway. 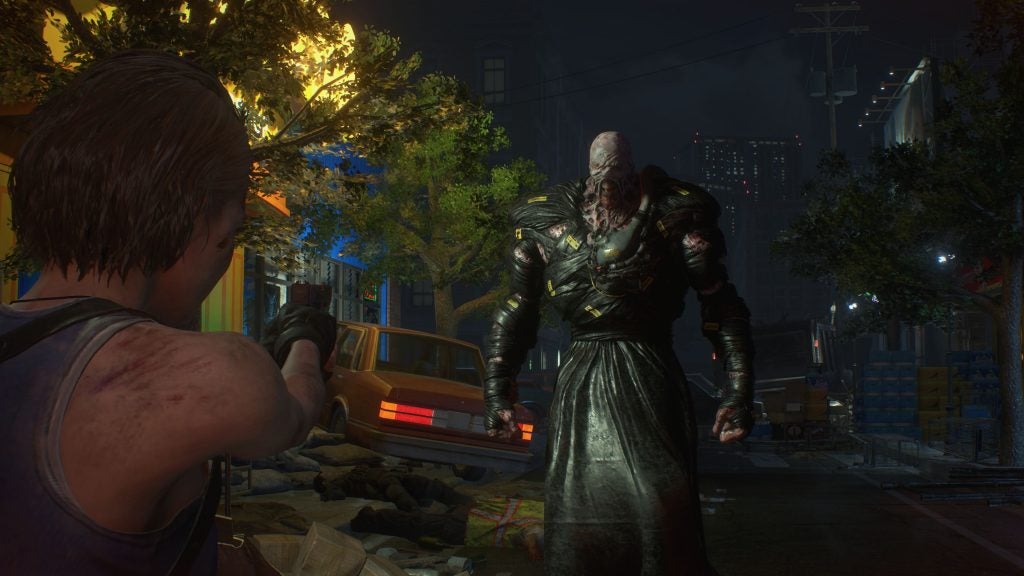 There’s no equivalent to Resident Evil 2’s Police Station in the third instalment. However, you do visit it briefly in some of Carlos’ playable sections, which are more akin to explosive third-person shooters than subtle survival horror. This means the majority of Nemesis’ appearances are preordained, confined to high-octane setpieces instead of tense, unexpected cat-and-mouse chases through tight, inescapable corridors.

I miss the cadence of encountering Mr X, left breathless as I tried desperately to outsmart him with a well-aimed headshot or by scrambling for the nearest safe room. Those hoping for something like this will leave Resident Evil 3 deflated after wrapping its 4-5 hour campaign. While Nemesis doesn’t have the impact many will be hoping for, he’s still a thrilling inclusion. Boss battles are a blast, as you’re circling around him helplessly seeking out ammunition, hoping that your final round will be the last one required to bring him down.

I won’t spoil how many forms the Nemesis has, but watching as he transforms into a strange, otherworldly abomination is a sight to behold – especially since I’m nervous at the prospect of finally having to lock, load and face him myself. Beyond Nemesis, Resident Evil 3 follows the formula we’ve come to love from the series. Jill must explore multiple locations in search of puzzle solutions, fighting all manner of deadly creatures along the way. 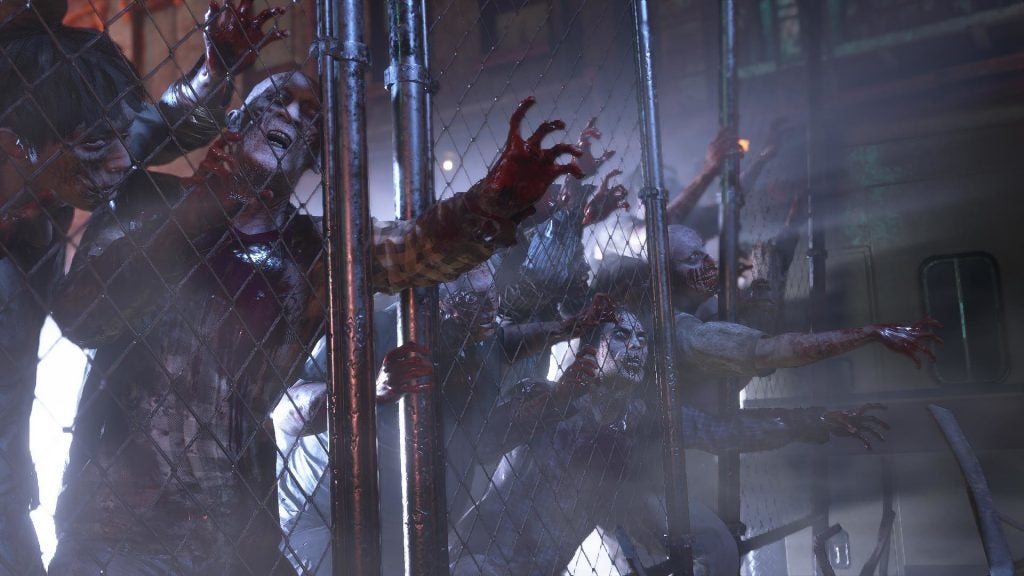 Raccoon City is the definite highlight, with Capcom having crafted a sizable chunk of the metropolis to explore, all of which has been torn to pieces by the unfolding chaos of a zombie outbreak. Humanity’s failure to combat the apocalypse is evident by overturned cars and haphazard barriers strewn about the place, uncontrollable fires acting as small bastions of light cutting through the darkness. It’s a haunting image, and moving through the city is undeniably nerve-wracking.

Peering into abandoned storefronts hoping to come across previous supplies only to be jumped by a resting zombie caught me off guard multiple times, as I scrambled to pull off a few clumsy headshots to put them down for good. Gunplay in Resident Evil 3 feels fantastic, with each bullet tearing through the flesh of enemies as they leave a bloody, noticeable mark. Given that zombies won’t stop despite multiple bullets to the face, it makes the need for accuracy constantly paramount.

You’ll also stumble upon infected dogs, insects and other bioweapons in the form of Hunters. They’ve returned from the classic games, and have been enhanced with arachnid-like mandibles and sharp claws that can tear through Jill and Carlos with a single slice. This can lead to some frustrating instant kills if you fail to dodge them correctly, a move which isn’t easy given the small space of most locations.

There’s a tension to every combat encounter and if you’re careless, there’s a chance you won’t survive. Ammunition and healing items are in abundant enough supply that you can often heal up, but failure to act amongst a horde of zombies and you can kiss your butt goodbye. I love the pace of dealing with multiple zombies at once, knowing that all it takes is an inch of panic for things to turn for the worse. On the flipside, wiping out hordes without a scratch is so, so satisfying. 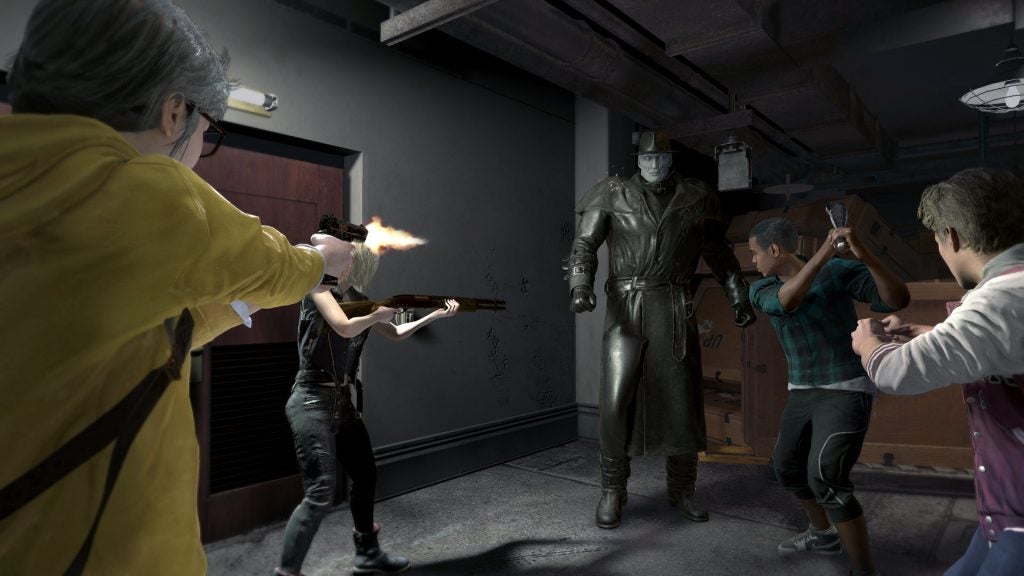 While the campaign presents an abundance of fascinating locations to uncover, they all speed past long before you’re done soaking them in. Things move at such a breakneck pace that you seldom have room to breathe, and with no option to return to past areas, an extra playthrough is needed to experience everything Resident Evil 3 has to offer. It almost feels like it’s brief by design, engineered specifically for speedruns and completionists.

You can dive into the campaign after finishing it, using credits to purchase bonus costumes, weapons and items which make certain aspects of the adventure much easier. I ran through it a second time as a part of my review to see how quick I could speed through the entire experience. I was close to under 2 hours, showcasing how fast things can be completed if you’re fully aware of puzzle solutions and how to contend with the infected.

Resident Evil Resistance is a multiplayer outing bundled in with Resident Evil 3, adding a bit of extra meat to the bone. Unluckily for us, this meat has been left on the grill a little too long and tastes all burnt and nasty. Maybe I’m being too harsh, but this asymmetrical multiplayer experience fumbles its potential thanks to a distinct lack of balance and maps which simply don’t feel suited to its initial design ideas.

You either play as one of four characters attempting to escape a twisted situation, or the Mastermind – an evil overlord capable of spawning zombies, traps and turrets all over the map in a bid to stop the struggling survivors. It’s a compelling premise that feels like a lovechild of Dead By Daylight and Five Nights at Freddy’s, yet is held back by a lack of focus and somewhat clumsy execution. 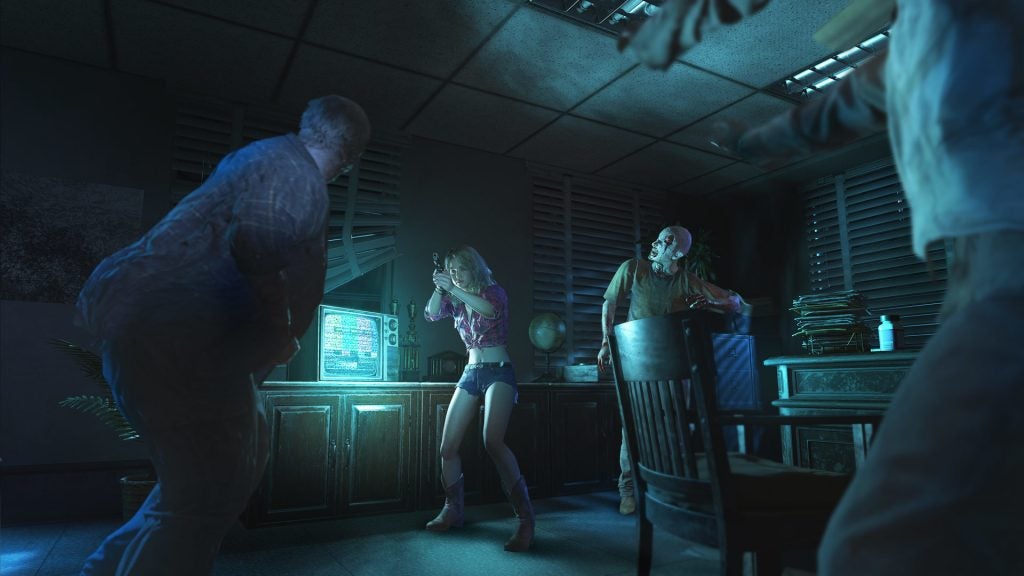 Each match is split into multiple stages, with survivors having to complete objectives to unlock a door and progress to the next area. This might involve collecting puzzle pieces, activating terminals or destroying virus containers strewn about the map. It sounds simple but grows far more complicated once the Mastermind begins toying with light switches, locking doors and spawning all sorts of nasties to eat you alive.

As I said before, the core of Resistance is tantalising, yet the existing blueprint it’s been crammed into is lacking in elegance. Environments are small and dimly-lit, much like the campaign, consisting of tight corridors or winding obstacles that are hard to navigate without the addition of randomly generating enemies and landmines. Throw those in, and it’s an exercise in frustration since you and your teammates often feel powerless to change the tide.

If the Mastermind decides to spawn multiple foes in the same place (which I totally did) you’re stuck dispatching them with weak weapons. If they manage to attack you, you’ll likely be frozen in animations you’re powerless to escape from, watching as the precious time limit ticks down into certain oblivion. Controls lack the snappy responsiveness of single-player only adding to a pile of annoyances.

Things feel unfairly weighed in the Mastermind’s favour the majority of the time. One match saw me reaching the final exit, but an endless stream of zombies being spawned at the door made it impossible to escape. As we dispatched one wave, another appeared in its wake until our resources ran dry. After that, it was game over and back to the matchmaking screen. I understand we’re fighting against impossible odds, but the possibility of surmounting them doesn’t feel reachable enough right now.

You can spice up the flavour of each round by purchasing an assortment of weapons of items with Umbrella Credits from crates set between each objective. If you’re talking with friends over voice chat, it’s best to make sure your equipment is focused on certain tactics. For example, melee weapons are far better for destroying virus containers, blowing them to pieces far quicker than bullets. This way, you also save on ammo. 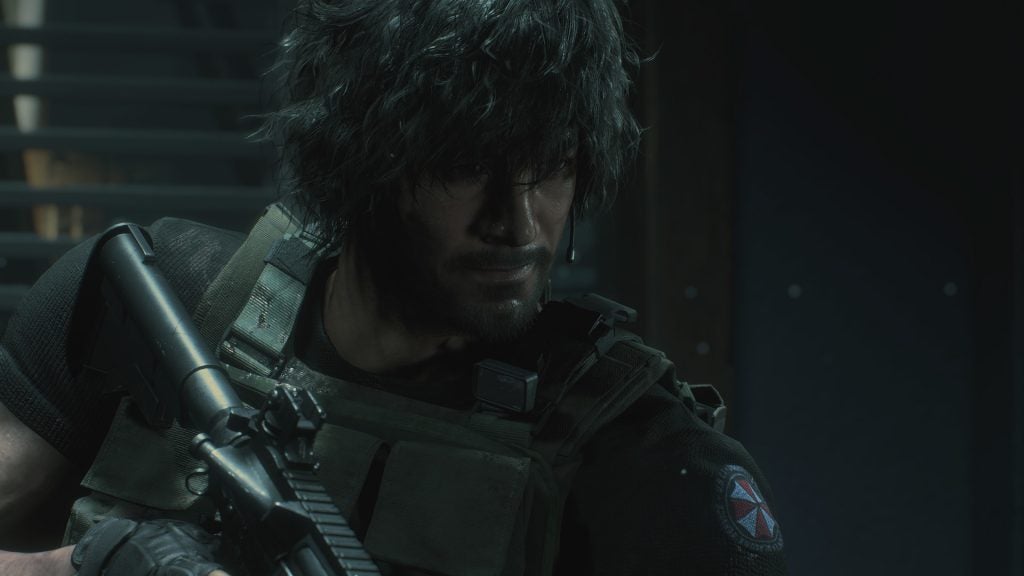 Resistance has a reasonably robust progression system with plenty of skills and cosmetic unlockables for each character, so those who enjoy it have more than enough content to look forward to. However, in-game microtransactions hint at players being able to purchase upgrades which could give them a distinct advantage – although you’d need to pour a decent amount of money into the economy to make any significant difference.

Resident Evil 3 is a bit of a disappointment. It’s still a gorgeously spooky time, but one that is marred by an overly brief campaign and a so-so multiplayer component that doesn’t reach the standard we’ve come to expect from Capcom in recent years.

The narrative is still a campy blast, crafted in such a way that hardcore fans and newcomers alike will adore Jill Valentine’s debut in the modern era, even if her journey is all too fleeting. Chances are this won’t be the last remake we’ll see in the iconic survival horror franchise, I just hope it learns from some of the mistakes made here.