The Red Magic 3 offers amazing value amidst the current gaming smartphone crop; boasting premium performance at a mid-range price. Chuck in special features, such as its turbo fan, a mammoth battery and an abundance of accessories, and the Red Magic 3 is hard to pass up if your number-one priority is gaming on the go.

The Red Magic 3 joins the growing contingent of smartphones designed specifically for gaming. It squares off against the likes of the Black Shark 2, Asus ROG Phone and Razer Phone 2 – the most prominent examples in the category so far.

This handset is by no means lacking in specs – rocking a Snapdragon 855 processor, up to 12GB RAM and an Adreno 640 GPU but creators, Nubia, still thought it best to include one extra feature to blow its competitors away, fitting a ‘turbo fan’ for active cooling.

Factor in an enormous battery, built-in capacitive shoulder triggers, an RGB light strip and a fiercely competitive price, and you’ve got one of the very best gaming smartphones currently available.

The secret to designing a quality gaming phone is to add a splash of RGB lighting without making it look overbearing. The Red Magic 3 strikes this balance perfectly; resembling your average modern handset from the front, whilst showcasing a little flair at the rear.

The Red Magic 3 doesn’t quite have an edge-to-edge display like most flagship phones but its surrounding bezel is still incredibly skinny along either side. Smartphone snobs may not be pleased with how chunky the bezel is on the top and bottom, but the alternative would be a notch or pinhole design, which could prove distracting when gaming and run the risk of accidental touch input.

This phone is absurdly large; its whopping 6.65-inch display makes the Samsung Galaxy Note 10 look tiny by comparison. Such a titanic screen size is obviously very good for gaming but I found it awkward when typing. I’d constantly inadvertently brush the keyboard, and bombard my friends with random GIFs or stickers. 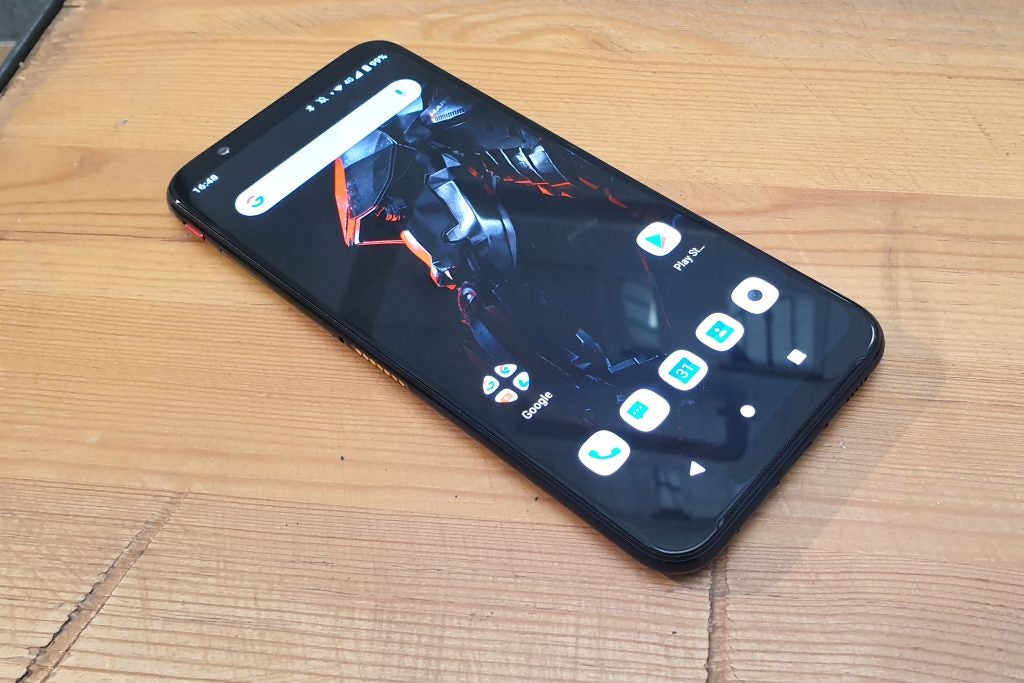 Turn the phone around and its gaming pedigree becomes immediately apparent. There are bright red strikes in each corner of the phone, granting it a slick, almost sinister aesthetic. A diamond-shaped fingerprint scanner – which I’m convinced is influenced by rupees from the Zelda franchise – sits in the centre of the back of the phone, in an easy-to-use location.

Then there’s the RGB light strip, which runs vertically down the centre. The strip doesn’t always glow, which is no surprise since that would be a massive battery drain. It can be customised to alert you to notifications or signal that the phone is still charging. There are 16.8 million colours to play around with, or you can turn it off permanently if you think RGB lighting is a tacky gimmick.

The Red Magic 3 is strangely devoid of buttons on its left side. Instead, you’ll find a slider (which activates the Game Space 2.0 dashboard), the dual nano-SIM card slot and the Gaming Port that allows you to clip on the Magic Adapter accessory. 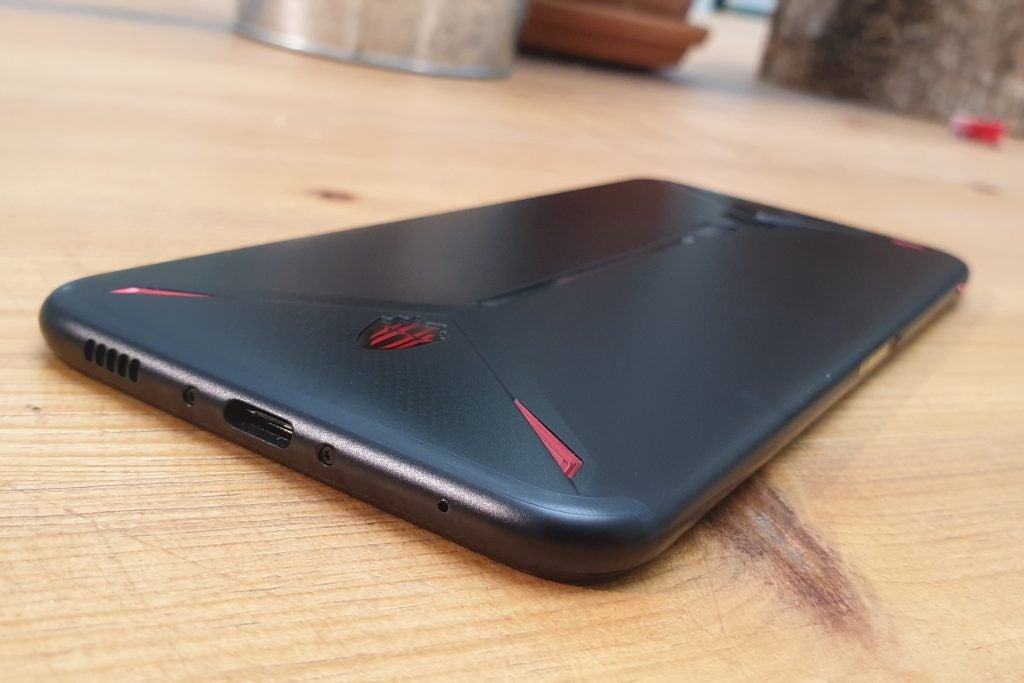 On the right side of the handset, you’ll find physical volume buttons, the power button and two built-in capacitive shoulder triggers which can be configured to replace on-screen buttons. Don’t worry, a 3.5mm headphone jack is also present, nestled in the corner of the phone’s top edge. And finally there’s a USB-C slot at the bottom for charging.

Screen – A solid display for gamers

The 6.65-inch display may make the Red Magic 3 a struggle to squeeze into the pocket of your skinny jeans but it does ensure a lovely widescreen visual feast. With a 19.5:9 aspect ratio, this smartphone has a taller silhouette than most, which only adds to its imposing nature.

At 1080 x 2340, the pixel count isn’t breaking any records but still equals its closest rival in the Black Shark 2. The AMOLED technology at play does at least ensure that contrast is on point and colours carry an extra punch compared to equivalent LCD panels.

With a 90Hz refresh rate, the Red Magic 3 provides a super-smooth visual performance for fast-paced games. This grants it a big advantage over the likes of the Black Shark 2, which can only muster 60Hz, but can’t quite match up to the 120Hz panels utilised by both the Razer Phone 2 and the forthcoming Asus ROG Phone 2.

Performance – One of the most powerful Android phones

The Red Magic 3 is a supremely powerful phone. Switching apps and browsing tabs can be done at a lightning pace, with the phone rarely hesitating or baulking at my demands.

Despite my model of the Red Magic 3 possessing the same Snapdragon 855 CPU, 8GB RAM and Adreno 640 GPU as the Black Shark 2, the latter retains its crown as the most powerful gaming phone, boasting better benchmarking scores across every test.

The performance difference isn’t enough to be noticeable though and the Red Magic 3 is £60 cheaper, so arguably represents better value.

The one special feature that the Red Magic 3 does possess over the Black Shark 2 is its internal ‘turbo fan’. It’s odd having a fan inside a smartphone as you would expect to find on a full-fat gaming rig but it does prevent the phone from becoming uncomfortably hot to hold. Place your ear to the back of the phone and you can hear the soft whirring of the blades but the noise is so faint it’s unlikely to distract, especially if you’re plugged in using headphones or enjoying loudspeaker audio from the decent pair of front-facing stereo speakers.

Nubia claims that pairing the fan with the phone’s liquid cooling tech will see CPU clock speeds improve drastically compared to passively-cooled gaming phones. This showed in our results as the Red Magic 3 suddenly started seeing even better processing scores than the Black Shark 2. When the fan is enabled in Game Space, it will automatically spin up as needed, whilst gaming. 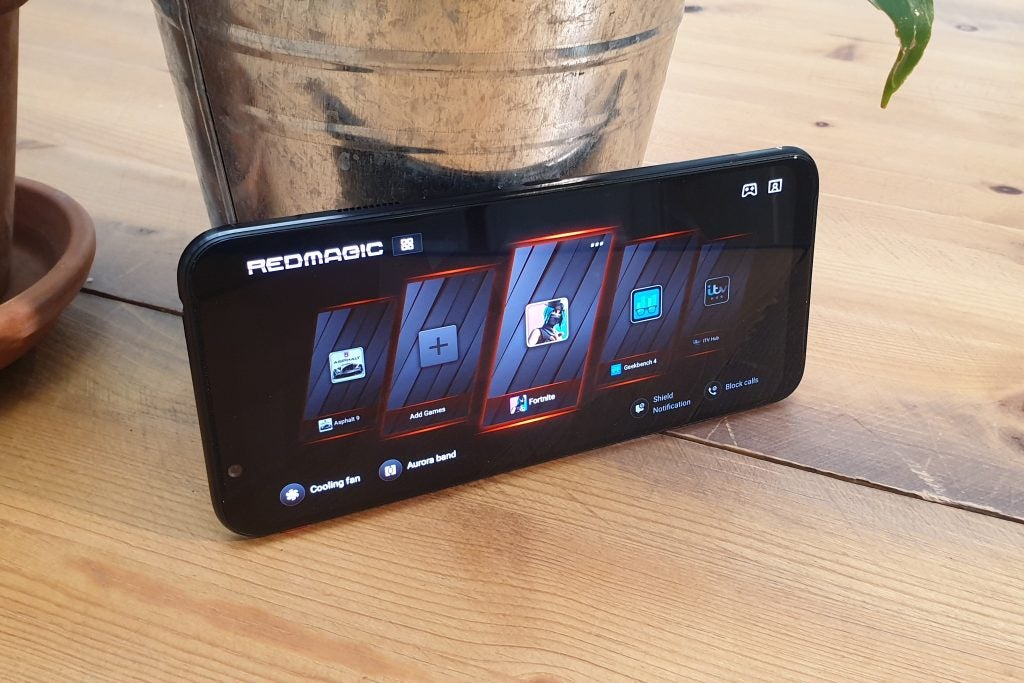 The 128GB storage offers plenty of space for all the games you plan on downloading. Spend £110 more and you can upgrade the storage to a whopping 256GB (as well bumping RAM up to a whopping 12GB) – but I personally think that’s excessive unless you have a massive collection of demanding mobile titles to work through.

There’s no 5G modem here, which is a little surprising since it’s the growing trend among smartphones and would be very much appreciated for online gaming but I can see why Nubia would have snubbed it in favour of keeping costs down. It’s a decision that Asus has also made with its upcoming ROG Phone 2, which doesn’t enjoy the same affordable nature.

The optional controllers were the killer feature of the Black Shark 2, enabling users to play games in the more traditional fashion rather than using clumsy on-screen buttons.

Nubia was clearly keeping tabs, as it has also launched a pair of controllers with the Red Magic 3, as well as a case that lets you clip them onto each side of the phone.

Then there’s the Red Magic Adapter, which clips onto the phone’s Gaming Port and allows you to hook up an Ethernet cable for a more reliable internet connection. You don’t want rubbish ping preventing you from attaining a Fortnite victory after all. The adapter also has a headphone jack and USB-C port, which is incredibly useful since clipping on the controllers will block the original ports on the handset. At £41.90, however, only hardcore mobile gamers need apply.

The Red Magic 3 has a stonker of a battery, with a 5000mAh capacity. This results in healthy battery life, easily exceeding a day with typical day-to-day use.

After a day of video streaming, messaging, social media browsing and Pokémon catching, the Red Magic 3 still had 25% of its juice left in the tank come midnight. Considering my Samsung Galaxy S9 struggles to survive the commute home from the office, that is a mighty good result.

Of course, playing games will see the battery drain quicker. Asphalt 9 saw the battery fall by 15% after an hour. This means you’ll likely see six to seven hours of use playing games non-stop, which is wholly respectable.

The downside of having a large battery is that it takes a long time to charge it back up to full capacity – two hours with 18W fast-charging, to be precise.

Software – Navigating the Red Magic 3 is as easy as Pie

Nubia thought it best to keep it simple on the software side on the Red Magic 3, opting for near-stock Android 9.0 Pie. An apps drawer can be summoned by swiping up and stores every one of the applications downloaded from the Google Play store. You’re able to fling your favourite apps to the main home screens above for easy access. 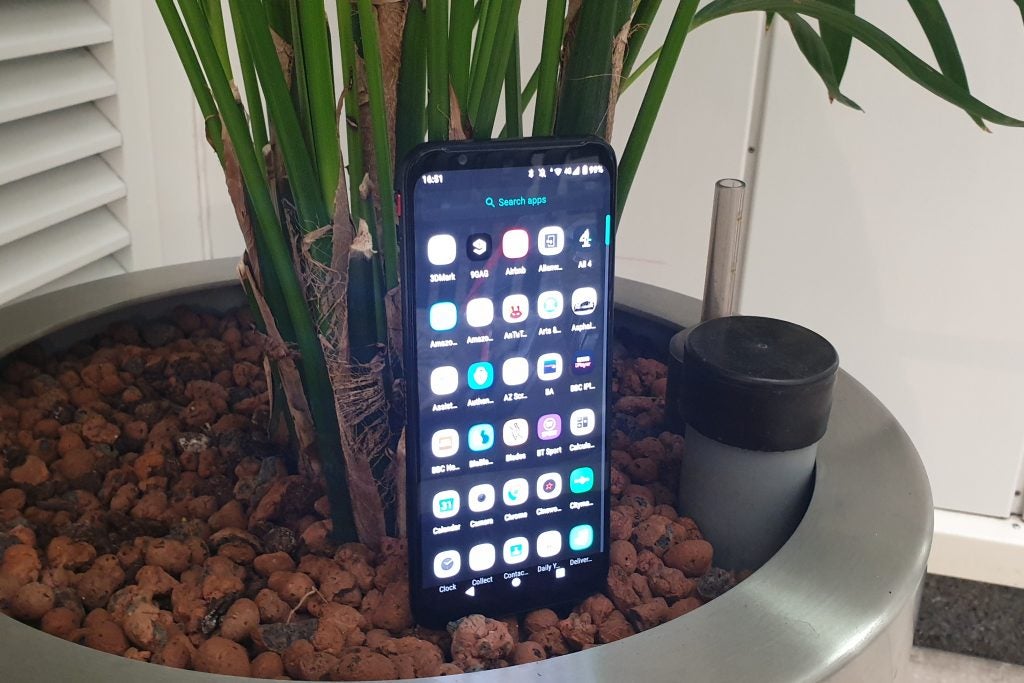 The Game Space is launched by flicking the physical switch on the top-left edge of the phone. Here, all your downloaded games are assembled, while the display’s layout is optimised for horizontal viewing.

You can also customise the fan settings as well as the behaviour of the RGB light strip from within Game Space, not to mention block notifications from disturbing you while you’re playing games.

The Red Magic 3 features a single 48-megapixel IMX586 Sony sensor. On paper that sounds fantastic but camera quality depends largely on the software as well as the megapixel count.

In bright conditions, the Red Magic 3 takes excellent shots, with pictures looking detailed and sharp. There was no need to mess with the settings to get quality photos either, although ‘Pretty mode’ does boost the vibrancy if you like colours to appear bright and cartoonish.

Quality suffered in low light environments but not to such an extent that they were no longer Instagram-worthy. Colours still popped but detail wasn’t quite as clear.

The camera’s biggest weakness becomes apparent when zooming in. While modern flagship smartphones often boast a dedicated secondary telephoto or optical zoom sensor, the Red Magic 3 only has its single sensor to work with. This means picture quality becomes drastically fuzzier and colours appear significantly more washed out as soon as you zoom in.

The Red Magic 3 is technically capable of shooting 8K video but only at 15fps. While a headline-grabbing claim, in practice this results in footage that’s actually terrible to watch back. Even the quality of the phone’s 4K video lacked fluidity, so you’re really best off sticking to Full HD. 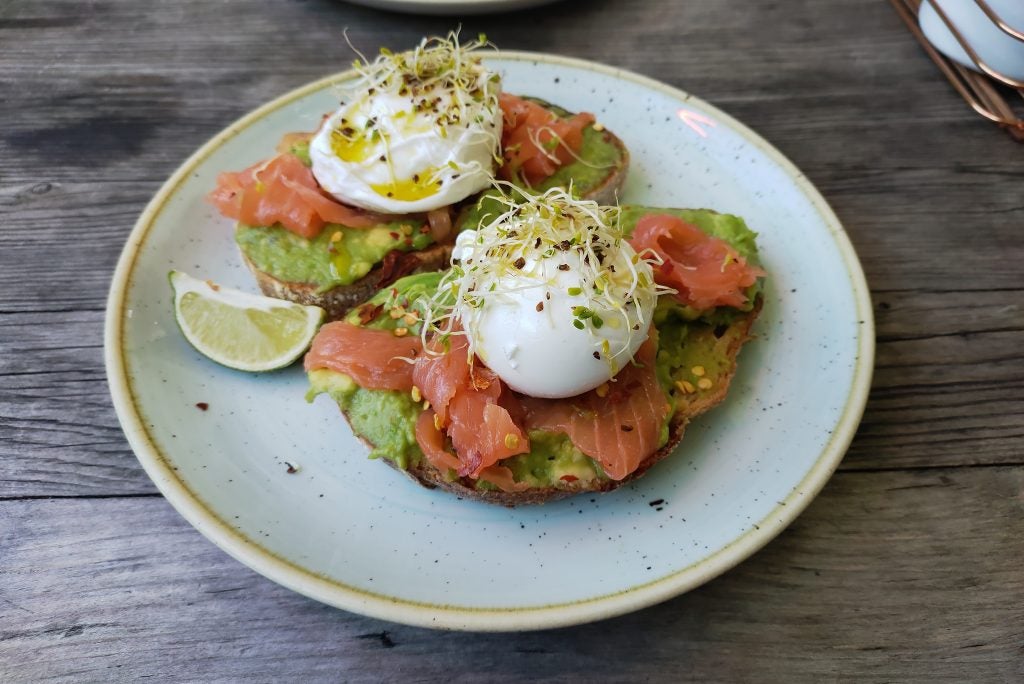 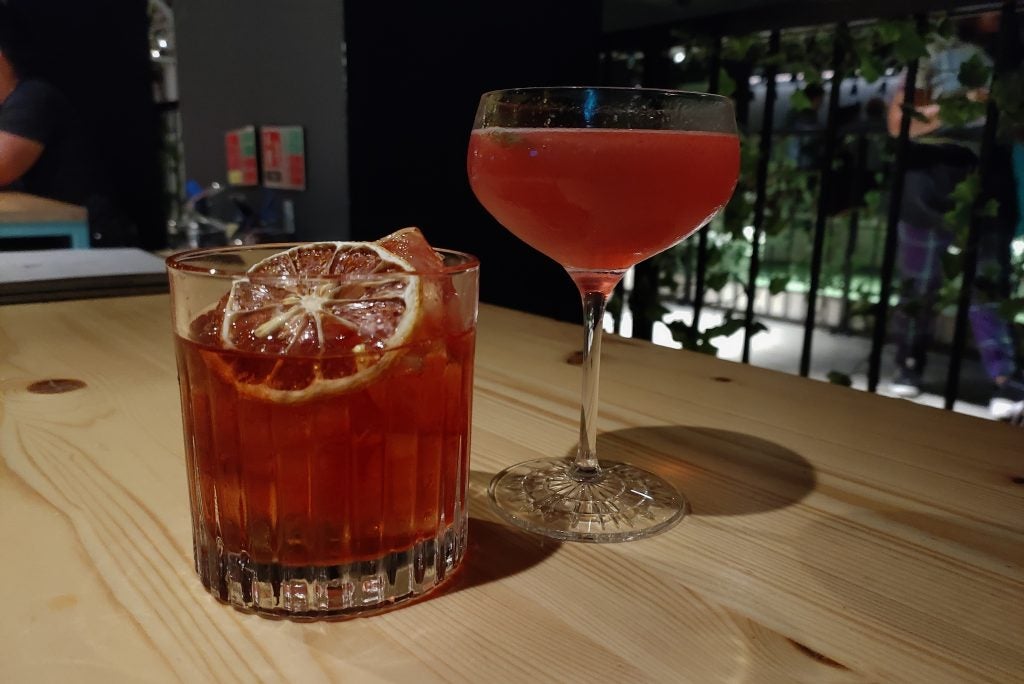 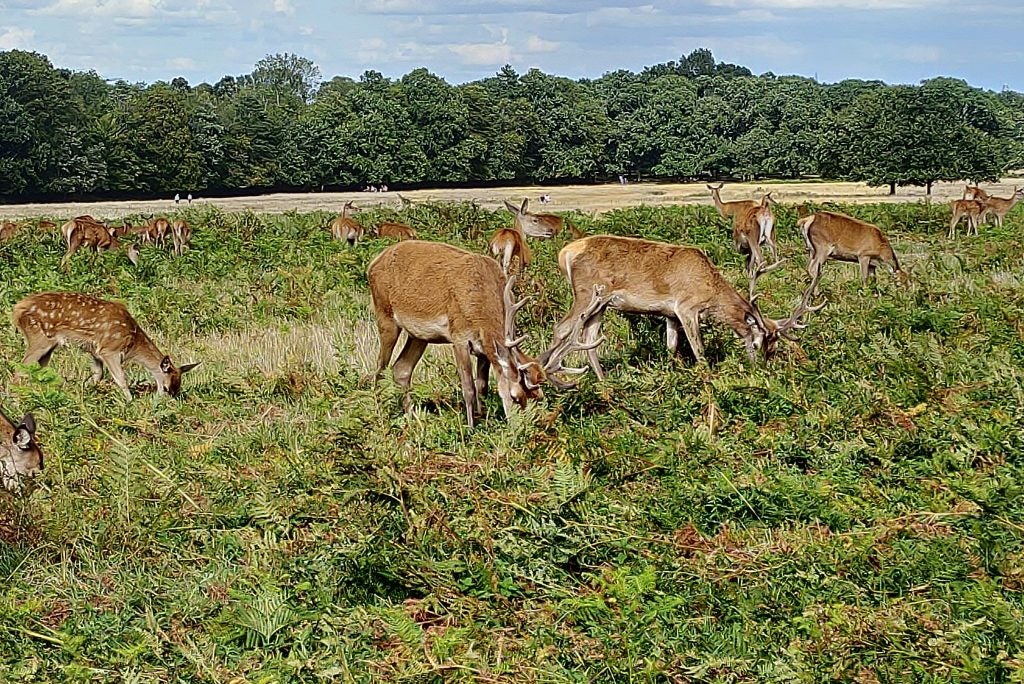 Should I buy the Red Magic 3?

If you’re looking for a gaming phone, the Red Magic 3 is one of the best options available. With ultra-powerful components running the show, it’s easily one of the most powerful Android phones out there right now, while the double act of the turbo fan and liquid cooling tech ensure that it never gets too hot, even after a lengthy gaming session.

The Red Magic 3 isn’t quite as powerful as primary rival, the Black Shark 2, but the former is not only £60 cheaper, it also offers a superior 5000mAh battery and a 90Hz refresh rate-capable display for a smoother visual experience.

Even with cloud-based services such as Google Stadia potentially making high-spec mobile hardware redundant in the future, the optional clip-on controllers still give this handset plenty of appeal, based on the current mobile/portable gaming landscape.

The Red Magic 3 offers amazing value amidst the current gaming smartphone crop; boasting premium performance at a mid-range price. Chuck in special features, such as its turbo fan, a mammoth battery and an abundance of accessories, and the Red Magic 3 is hard to pass up if your number-one priority is gaming on the go.