Asus isn’t planning on releasing the ROG Phone 2 until September, but the company has already shown off its next mobile gaming powerhouse – granting us a pretty complete look at what this Razer Phone 2-rival is bringing to the table.

As the company revealed last week, the device centres around Qualcomm’s newly-enhanced Snapdragon 855 Plus system-on-chip, which should deliver a 4% performance improvement compared to the standard 855, as well as a 15% bump to its graphical capabilities, by way of a tuned take on the existing chipset’s Adreno 640 GPU.

Asus isn’t willing to waste any of that extra power either, with a bigger smartphone that’s choc-full of gamer-focused features. We do mean ‘big’, too – the ROG Phone 2 looks to be one of the largest, thickest, heaviest phones of 2019, measuring a whopping 9.5mm thick and weighing in at a hefty 240 grams.

The company isn’t concerned about its phone’s sizeable form though, stating that, based on its own research, gamers just want the biggest screen possible, irrespective of compromises to form.

Speaking of the screen, it’s seen a bump from 6-inches in an 18:9 aspect ratio on the original ROG Phone to a taller 6.59-inch 19.5:9 panel. It packs a few more pixels, comes protected by Gorilla Glass 6 and still leverages AMOLED technology to deliver vivid colours and true blacks, but Asus didn’t stop there. 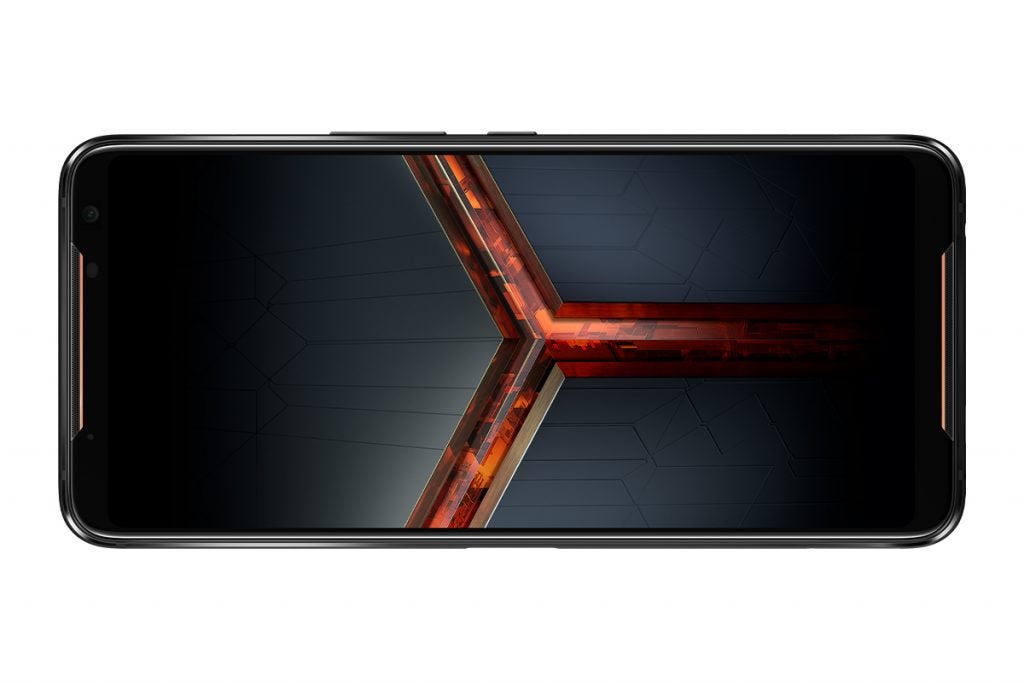 The ROG Phone 2 is also the first phone ever to boast a 120Hz AMOLED screen (up from a maximum 90Hz on its predecessor) and what’s more, it supports 10-bit HDR, with the ability to upscale SDR content to near-HDR levels. A 240Hz touch sampling rate also features, which should ensure latency-free touch input – Asus says at worst, you’ll experience a 49ms delay, which for most scenarios will be imperceptible.

The awkward offset rear fingerprint sensor from the first phone has also been nixed in exchange for an in-display offering.

For such a huge, heavy device, you’d hope that its volume is mostly occupied by a big battery, and sure enough the ROG Phone 2 possesses a gargantuan 6000mAh cell, which should grant most gamers enough juice for several extended play sessions away from the wall plug.

Better yet, the phone can be refilled to offer a day’s use from an hour’s charge or get fully replenished in around 90 minutes, thanks to the included 30W fast charger, not to mention wider Qualcomm Quick Charge 4+ and USB Power Delivery support, too. 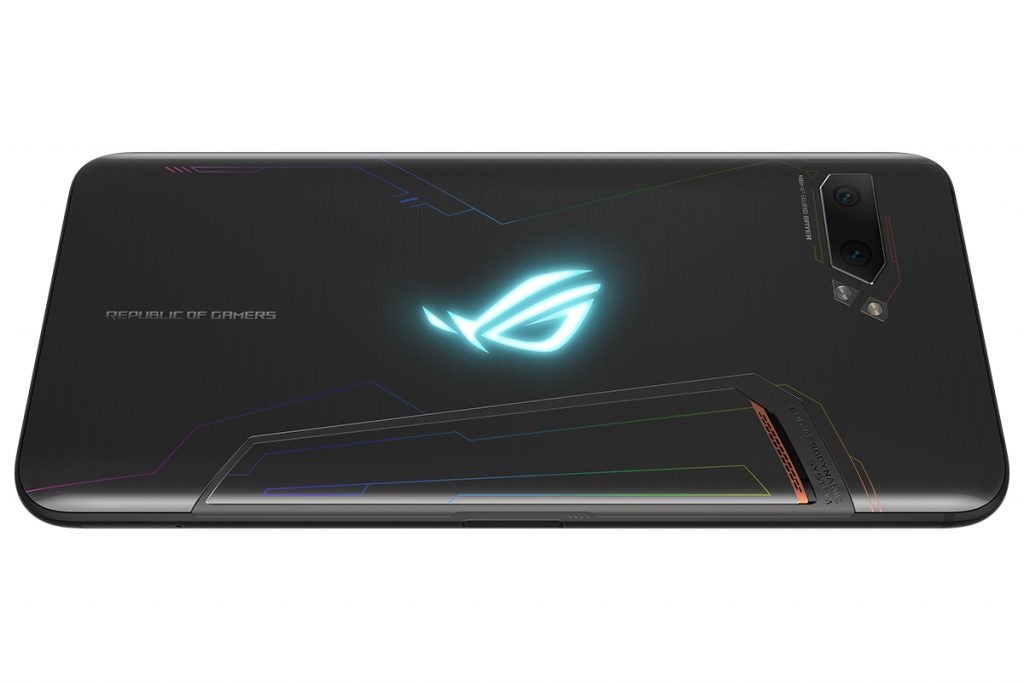 So you have a big phone with a big battery; you also benefit from a heap of storage and memory. The ROG Phone 2 starts with 256GB of (non-expandable) space and can be fitted with up to 512GB if preferred, while the standard 12GB of DDR4 RAM should be more than enough for most gamer’s needs and ensure that this phone doesn’t break a sweat when multitasking.

It’s also worth mentioning the inclusion of UFS 3.0, a feature which, until now, has remained exclusive to the OnePlus 7 Pro (following the Samsung Galaxy Fold‘s false start). In the case of the ROG Phone 2, this should help cut down on app/game load-times but it results in generally snappy storage performance across the board.

The camera setup is a little more pedestrian than the rest of the phone, mainly because it’s been lifted from the company’s current mainstream flagship, the ZenFone 6. As such, you’ll find a 48-megapixel (IMX586) main sensor and a 13-megapixel, 125-degree ultra wide-angle secondary sensor on the back. Dumping the ZenFone’s unique flipping camera mechanism does mean Asus had to throw in a dedicated front-facer too, which takes the form of a 24-megapixel single sensor.

Now, let’s take a look at those gaming-specific features. The design echoes that of the previous ROG Phone, with a shiny asymmetrical back that’s dominated by the ROG logo, which itself employs the company’s Aura LED lighting effects and can double as a notification light.

It’s a little more subtle this time around but there’s also a physical cooling vent, which forms one part of an impressively robust cooling system. The GameCool 2 setup makes use of a ‘3D’ vapour chamber and a heat sync, both of which lead to this venting. If that still isn’t enough, one of an army of new accessories that interface with a specialised USB-C port set into the phone’s side can be employed to great effect. 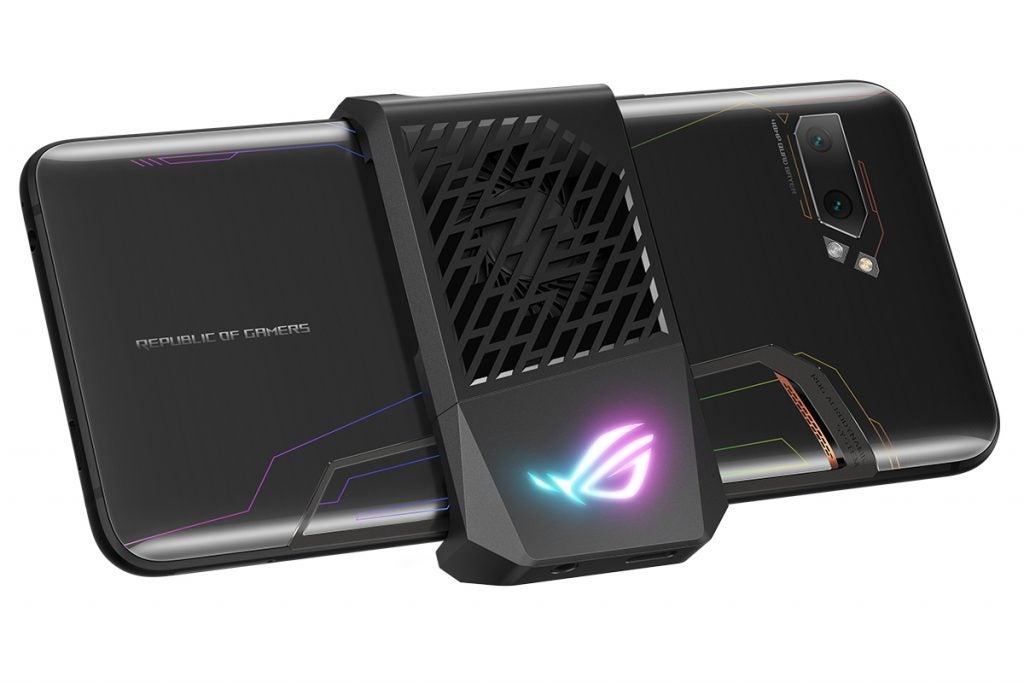 The optional AeroActive Cooler 2 (which can be paired with the new ROG Aero Case) is apparently four times quieter than the original peripheral’s fan but also offers greater cooling efficiency, meaning you shouldn’t have to worry about thermal throttling during extended periods of gaming.

While the thick body of the ROG Phone 2 does accommodate a headphone jack on one end, the AeroActive Cooler 2 adds an alternate one on the phone’s underside, as well as an additional USB-C port (when holding the phone in landscape).

Alongside that specialised side-mounted USB-C port, the ROG Phone 2 does also possess a more conventional port along its bottom edge, as well as four microphones, one of which is optimised for voice chat in landscape use (ideal for team play in PUBG Mobile, for example).

The company’s patented Air Triggers make a return too, although this time these virtual shoulder buttons now support a programmable slide gesture, and their haptic latency has been reduced from 63ms down to 20ms (particularly important after the original iteration of this feature faced much criticism because of poor haptic lag).

On the subject of haptics, the ROG Phone 2 also features two vibration motors, one set along its X-axis and one along its Y-axis at either end of its body. As such, it should offer more diverse and immersive vibration feedback on supported games.

To up the ante, Asus has built upon the first-generation phone’s assorted accessories with a new range, some of which are simple updates – like the aforementioned AeroActive Cooler 2 – and some which expand the ROG Phone 2’s gaming prospects in interesting and diverse ways.

If the skeletal ROG Aero Case doesn’t offer enough protection for your peace of mind, then there’s the more robust Lightning Armour Case, which uses an NFC chip to display a custom wallpaper on the phone’s home screen, as well as some clever light piping on the back to channel the Aura lighting throughout its form. 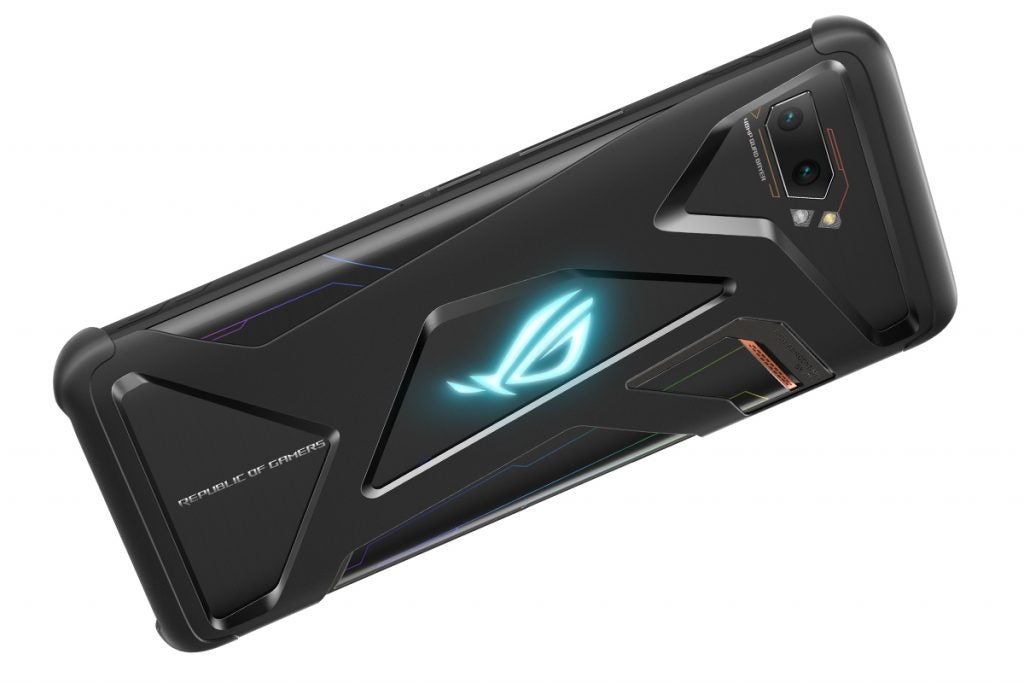 There’s an updated detachable secondary-screen experience, called the TwinView Dock 2, which, as with its predecessor, includes a full secondary fold-out display (this time above the phone), additional speakers, a 5000mAh battery pack and a cooling fan.

One of the most interesting inclusions is the new ROG Kunai Gamepad, which behaves almost exactly like a pair of Joy-Cons for the Nintendo Switch. The two small left and right-handed controllers connect wirelessly via Bluetooth and can slot into a central gamepad grip, or slide out and mount to the sides of the phone directly (by way of an included USB-C-powered cradle).

The gamepad is invaluable if you want to make use of one of the trio of new docks launching with the ROG Phone 2 too. The Mobile Desktop Dock lets you plug the ROG Phone into anything up to a 4K display and grants you the option of mouse and keyboard support as well as gigabit ethernet. 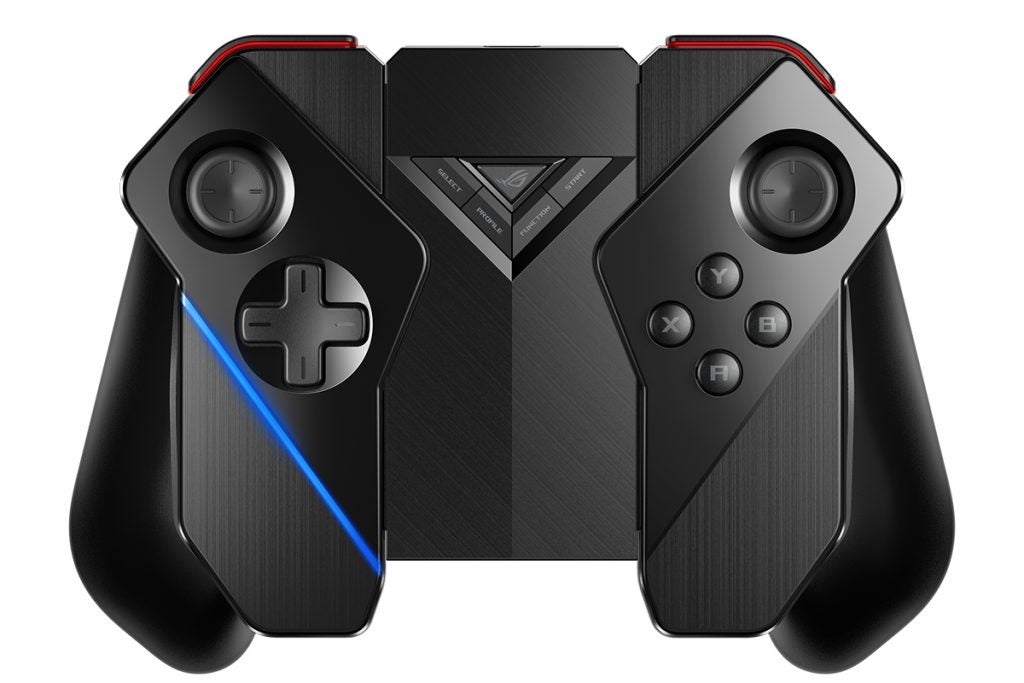 The Pro Dock acts like the Nintendo Switch’s native dock, letting you slot the phone in to blow up the visuals to your television.

Last but not least is the WiGig Display Dock, which as the name suggests, creates an ad hoc 802.11ad 60GHz WiFi network, which Asus is confident can support the phone’s 2560×1080 resolution at 60fps with zero latency.

It’s worth noting that not all of these peripherals, namely the Kunai gamepad, will necessarily work with every game out-the-box. Asus has already approached game publishers, like Tencent and developers for specific titles like Asphalt and Shadowgun Legends, to ensure features like gamepad support and its 120Hz display can be put to good use. So long as Asus remains committed to the ROG Phone 2, the user experience and game library should only get better with time.

Exciting accessories aside, one aspect of the ROG Phone 2’s hardware that does seem like a slight disappointment is the absence of 5G connectivity. Truly untethered mobile gaming is one of the key selling points of consumer 5G, so for such an otherwise capable and cutting-edge phone to omit such a feature seems like a bit of a shame. To try and lessen the blow, Asus has included a robust four WiFi antennas to ensure a reliably fast connection, whichever way you hold the phone.

To round things out, all this gaming-focused hardware comes supported by some equally tailored software. Running atop Android 9.0 Pie, the ROG UI appoints the ROG Phone 2 with some decidedly stereotypical gamer visual style and a bevvy of features that cater to the phone’s gaming experience.

The Game Genie, for example, lets you silence incoming notifications, lock the brightness and record gameplay, while the Armoury Crate, which is a game launcher of sorts, also lets you toy with the phone’s unique gaming systems, including lighting, audio, touch input and more.

If you don’t want to dabble with all that gamer-focussed functionality, Asus has included the option to jump to its more conventional ZenUI user experience at any point; resulting in an experience that more closely apes the standard ZenFone 6.

If it’s not already evident, the Asus ROG Phone 2 is nothing short of excessive when it comes to the breadth of its gaming credentials and capabilities. That means it’s equipped to tackle the latest mobile games with aplomb and should be able to fend off its competitors without too much trouble.

If you’re tempted by the raw power and the rich feature set that Asus is cramming into the ROG Phone 2, and live outside of China, you’ll have to wait until September for an official launch… and even longer for it and its many accessories to appear on physical and virtual store shelves.