At the tail end of 2018, Qualcomm unveiled its next flagship mobile processor, the Snapdragon 855; is set to power 5G phones like heavily rumoured the Samsung Galaxy S10. Here’s everything you need to know.

The Snapdragon 845 made a home inside the majority of late 2017’s and 2018’s top-tier smartphones but in recently it’s come up against superior competition from the likes of the Apple A12 Bionic and Huawei Kirin 980 processor. The Snapdragon 855 hopes to both tip the balance back in Qualcomm’s favour and introduce a number of new technologies as well.

At the heart of what the Snapdragon 855 brings to the table is 5G connectivity. Qualcomm spent the majority of the opening two-hour Tech Summit keynote waxing lyrical about the trials and tribulations of building a 5G infrastructure and creating a mobile chip to benefit from such a foundation, as well as the technologies that will help the 855 stand out from the crowd. 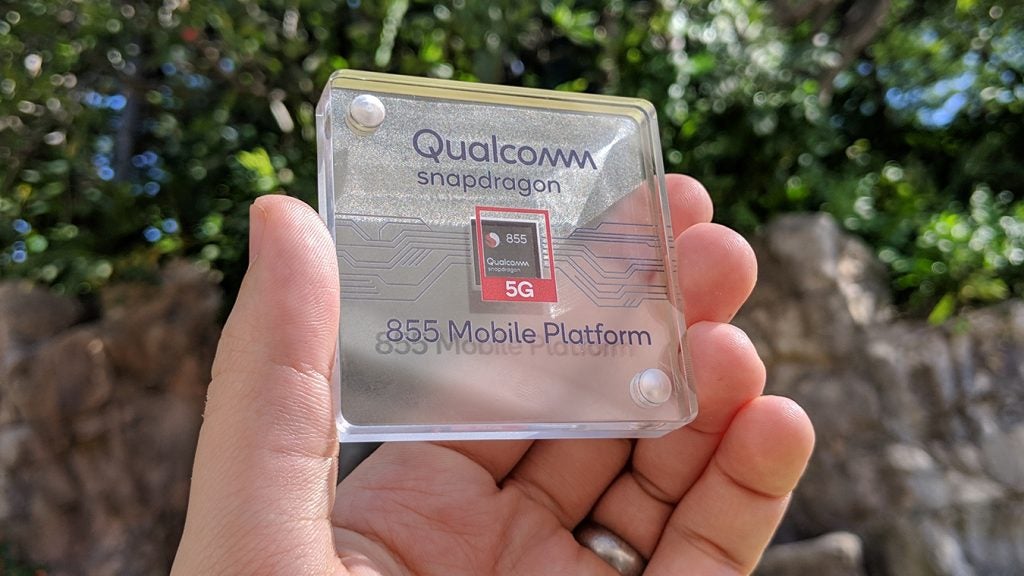 While 5G has larger implications for enterprise and industrial applications, the main benefit for consumers is the sheer speed boost they’ll experience. Once carriers properly implement 5G networks, users will start out with gigabit-class cellular browsing speeds, and they’re only expected to increase as the technology matures.

In the US, the likes of AT&T and Verizon are already testing live 5G networks and promising to deliver 5G-capable hardware in the first half of 2019. The same is true of EE in the UK, who has already confirmed that it will be launching 5G coverage in six major cities (London, Cardiff, Belfast, Edinburgh, Birmingham and Manchester), with an extended rollout covering a further ten locations before the year’s end. With this in mind, it’s important to be aware that you’ll only be able to benefit from 5G in specific places until it’s more widely available. 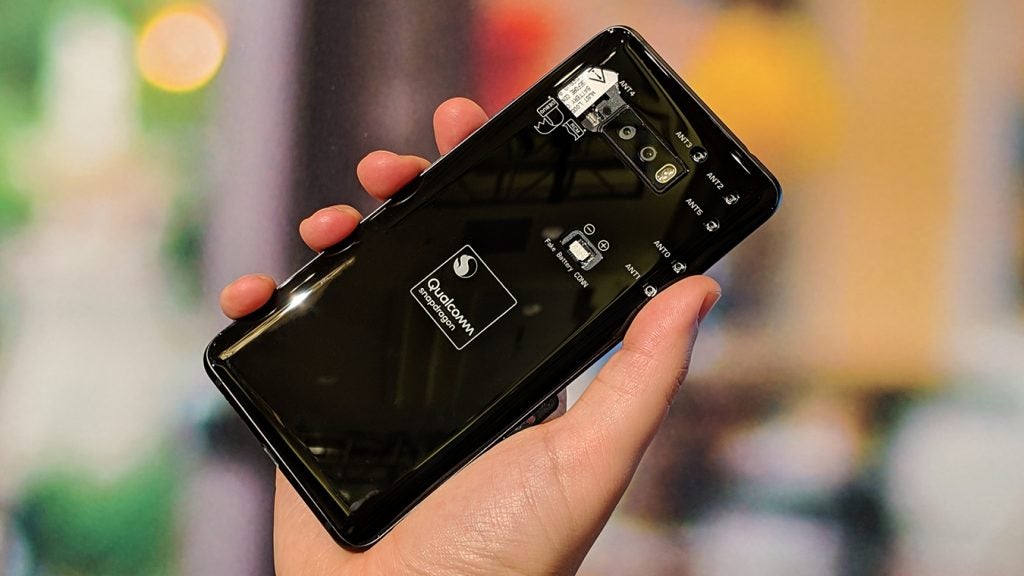 Expect high-resolution video streaming without buffering, near instantaneous downloads of conventional files and lag-free multiplayer gaming on-the-go to be among the key benefits of the technology.

It’s worth noting that despite pairing both the 855 and 5G together in most of what was said on stage at its unveiling, the chip doesn’t actually support 5G natively. The integrated X24 modem supports multi-gigabit Wi-Fi and 4G LTE (up to a theoretical 2Gbps) but it’s only when used in conjunction with the likes of the company’s X50 modem or the newly announced X55 modem, that devices will be able to utilise 5G data speeds.

While there will be an associated premium with buying a first-generation 5G phone, company’s like OnePlus have already confirmed that they’ll be selling two distinct versions of their next flagship, one that supports 4G and one that supports 5G. CEO Pete Lau has also hinted that prospective users should expect to pay a $200/$300 premium for the 5G version of his company’s next flagship phone.

Beyond mobile data speeds, the 855 will also debut the fourth generation of Qualcomm’s AI engine, which will permeate through everything from predictive search to machine vision. The new Hexagon 690 is equipped with more power, including a Vector Accelerator and Tensor Accelerator, developed in partnership with Google and designed with neural network machine learning in mind. 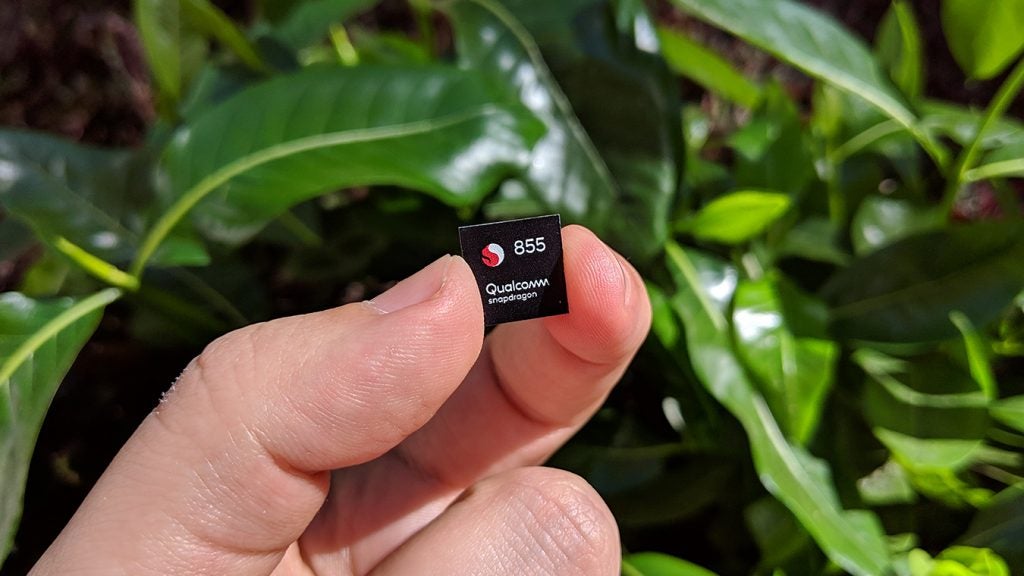 In a world first, Qualcomm is also introducing a computer vision-centric ISP (image sensor processor), called the Qualcomm Spectra 380 – dedicated hardware that will help inform machine vision tasks. It’s also well equipped for more mainstream photography jobs too, with support for dual sensors up to 20-megapixels each or a single sensor up to 32-megapixels.

Expect higher fidelity stills thanks to native support for MFNR (multi-frame noise reduction) and an even bigger leap forward in the video department with rec. 2020 colour gamut support, up to 10-bit colour depth support and the ability to record and play 4K HDR10+ content, or even 8K 360-degree VR video.

Qualcomm is also natively embracing HEIF and HEVC still and video containers. It’s a move we’ve already seen from the likes of Apple and Huawei but the driving force behind the shift in both cases was purely down to the file type’s advanced compression. Qualcomm is looking to leverage far more of the benefits of both standards, with the ability to contain each frame of a burst photo or depth data within a single file.

A particularly impressive on-stage demo also showed an app powered by one of Qualcomm’s software partners that let users film in 4K resolution with real-time object classification and segmentation, allowing the person in-frame to apply a Portrait Mode-style bokeh effect to the background of the recorded video in real-time.

Qualcomm also unveiled what it’s calling the ‘3D Sonic Sensor’ – a consumer-ready ultrasonic fingerprint sensor that can read depth data on top of the 2D image of your print. Confidently called “the most secure selection on the mobile market today”, the 3D Sonic Sensor will also be able to read the ridges and pores of your print, even if it’s covered in oil grime or water.

With users’ increased expectations of cinematic graphics, high-fidelity audio, fluid performance and long battery when gaming, Qualcomm has also made mention of Snapdragon Elite Gaming – a whole suite of features designed to satiate these expectations.

Open GL ES processes will consumer 20% less power while the 855’s Adreno 640 GPU will dole out a 20% performance increase compared to the Snapdragon 845. Vulkan 1.1 will be available for compatible titles, as will PBR (physically-based rendering), designed to add greater visual fidelity and realism to games.

Tieing into some of the Spectra’s benefits, gamers will be able to enjoy true-HDR visuals from rendering pipeline to display, with that same Rec 2020 colour gamut and 10-bit colour depth, upping the range of available colours from 16.7 million to over 1 billion shades.

The 855 is one of only a handful of chips built on an incredibly small and efficient 7nm process. As with its key rivals, the smaller die size means less resistance and therefore greater power efficiency, resulting in longer battery life and better overall performance.

The Kryo 485 CPU introduces the idea of a ‘prime core’ with a single 2.84GHz Prime Core, backed up by three additional 2.42GHz Performance Cores (all four of which use an A76 framework as a baseline, with Qualcomm customisations on top). There are then four additional 1.8GHz Efficiency Cores, which handle less demanding processes.

With all this engineering, Qualcomm’s Travis Lanier proclaimed on stage that the 855 offers the “largest performance jump ever, in a Snapdragon”. 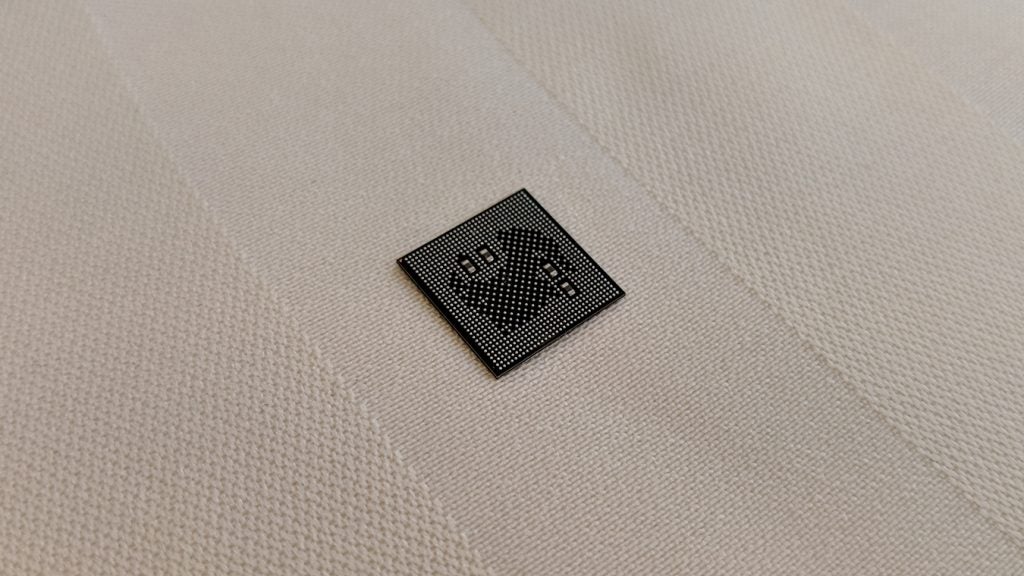 As for raw power, the 855 is said to offer a 3x overall performance improvement, compared to the 845 and a 2x performance improvement in AI tasks compared to rival 7nm chips that Qualcomm wasn’t willing to name on stage. By saying everything but their names though, the company clearly pointed fingers as Apple’s newest A12 Bionic chip and Huawei’s recently released Kirin 980 processor.

Samsung Electronics America’s Justin Denison sat on stage alongside Qualcomm’s Cristiano Amon at the 855’s launch stating, “we are going to be bringing a 5G smartphone to the US in the first half of 2019″ and continued “it’s powered by the Snapdragon 855 chipset”.

No points to whoever thinks Denison is talking about the much-anticipated Galaxy S10 (or even the Galaxy X, for that matter). In the US, Samsung’s flagship smartphones always use Qualcomm’s chips, whilst in Europe, the S10 variants are more likely to sport the Sammy’s own Exynos 9820 processor instead.

Would you be willing to buy an 855-powered smartphone before 5G is available? Or would you rather wait? Let us know @TrustedReviews