What is the Razer Panthera?

The Razer Panthera is a PS4 fight stick for players wanting to take their brawling to the next level. Built with the competitive gamer in mind, it includes every bell and whistle an eSports player could ever want. It also has the accessibility, storage and customisation bases covered, making this the all-in-one stick to take to tournaments – or simply to your friend’s house to dish out a pummeling.

The Panthera comes with both a ball and bat top, which can be customised to suit your preference. It’s fully mod-capable under the hood, and easily accessible to tweak to your liking. There’s also great storage within the stick itself, and comes with a superb build quality to match the price.

Not only that, but the Limited Edition Street Fighter V version I got my hands on includes an incredible decal that pays homage to Street Fighter Alpha 2. It features an updated version of that game’s box art with modern-looking Ryu and Akuma in a glorious face-off. 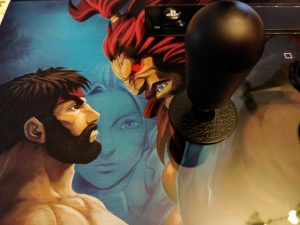 Whether you’re already a competitive eSports player looking for the tools to match the trade, or the best player amongst your buddies and wanting to get involved in the scene, this is very much the Rolls Royce of fight sticks.

As mentioned above, the Razer Panthera caters to every brawler’s needs, with fully customisable features and a superb layout and design.

This is a PlayStation stick, meaning the PlayStation’s home button sits atop the stick, snuggled next to three sliders: one to toggle whether you’re playing on PS3 or PS4, another to nominate the paddle as the left stick, right stick or a D-pad, and finally a slider that locks and unlocks the Start/Options and Select/Share buttons found on the right side of the stick. The touchpad, L3/R3 buttons and LED lights to indicate whether you’re player one, two, three or four are found adjacent to these sliders.

Below this is the joystick, to the left of the eight-button layout in a four-by-four configuration. The buttons are in a perfect arch, which sees them align perfectly under each finger when resting my hand on top of them. Players adjusting to life after a gamepad won’t have to worry about looking down and fumbling to find the input they want – unlike Guitar Hero.

Everything feels perfectly placed and spaced. In my time with the pad I’ve haven’t experienced any inadvertent button presses, incorrect inputs, or random jumps as I try to execute my quarter circles – even in the most frantic of moments. 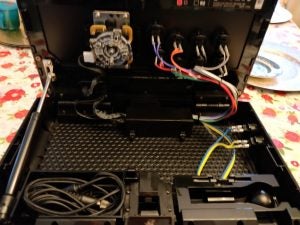 Below this arch of buttons is a big rectangular button bearing the Razer logo, which lights up when connected to the PS4. Pressing this will open up the top of the stick and reveal the inner workings and storage compartments.

Inside, the Razer Panthera is incredibly spacious. There are dedicated compartments for each accessory that comes with the stick.

To the left is a slot for the 3-metre USB cable, a chunky wire that’s unlikely to suffer any kinks or marks any time soon. The only problem – as anyone who’s gone camping with a pop-up tent will confirm – is getting the cable back into the storage compartment once you’ve taken it out of its initial box. Cables are annoying at the best of times, so trying to get 3 metres worth into a space the size of a matchbox isl never going to be easy.

Opposite this compartment is one for the different joystick tops and screwdriver. Changing the top is easy enough: I immediately swapped from ball to paddle top after getting the Panthera, and doing so was painless.

I’m yet to dive into the modding capabilities of the buttons themselves, as I found the current setup of the Panthera very comfortable. Nevertheless, having this option available for those who prefer different physical buttons on the stick is a great feature.

Underneath the stick is a non-slip rubber base that works superbly on any surface, whether gaming on a solid wooden desk of lounging about with the stick on your lap.

This is helped by the fact that the Panthera is a meaty piece of kit. You get what you pay for: this stick doesn’t feel cheap in any part of its build, with solid heft to it making it feel excellent in the hands. Getting it around may be a bit of bother – but it’s the price you pay for the best. 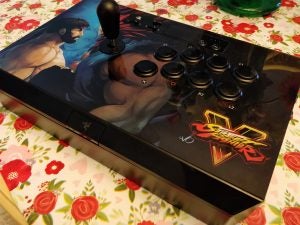 Once again, this is the Street Fighter V limited edition variant of the Panthera, so from a design perspective – from a person who’s played the Street Fighter series since they were five years old – I’m in love with the look of it. The artwork atop the kit never gets old; it’s a simply gorgeous piece of work that belongs in an artbook, let alone on a beautiful stick.

I can hardly fault the Panthera. Playing games such as Street Fighter V have been an absolute dream. I’ve always been a pad player when it comes to fighting games, having been put off by the cost of entry of fight sticks. But using the Panthera for just a few hours immediately had me converted. Inputs were sharper, more refined, more deliberate.

Does it make me good enough to tackle the eSports scene? Absolutely not. I’m still effectively rubbish at modern-day Street Fighter. The series has outgrown me. But again, for those who play nothing but brawlers, this is best way to play.

There are a couple of minor niggles, though. The Panthera can’t turn on the PS4 by itself, meaning you’ll have to grab a regular PS4 DualShock controller to turn on the PS4. Thereafter, you hit the home button on the Panthera, logging into your profile with it, and continuing from there. Also putting the PS4 into sleep mode with the Panthera plugged in will see the Razer logo continue to slowly flash unless you unplug it, which is a huge pain.

Price, of course, will be an issue for many: £199.99 is expensive by anyone’s standard, but for what you get it’s certainly reasonable. The question will be if you’re committed enough to what the stick is for to justify the outlay. 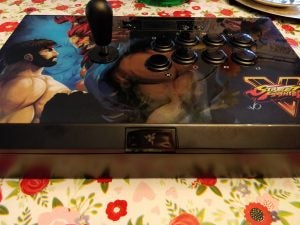 Why Buy the Razer Panthera?

The Razer Panthera Street Fighter V Limited Edition is the coolest video game accessory I’ve ever had the pleasure of testing. Superb design, excellent build quality mean it’s a great purchase for those who can afford it.

It’s expensive, but for those who are committed to eSports and fighting games, spending on the money of such quality hardware is worth it.

If you’re an eSports PS4 gamer who’s after a solid arcade stick that includes customisation options aplenty, storage within the stick, and you’re hankering after the coolest-looking stick in the arena then buy the Razer Panthera.