How good is the Razer Blade 15 screen?

There’s little point in having a gaming laptop powerful enough to run games in 4K with a super-high visual fidelity, only for it to be displayed on a terrible screen that doesn’t give those vibrant open-world settings justice. The screen on a laptop is very important indeed, yet many manufacturers look to cut corners in this department.

We performed several thorough display tests on the Full HD LCD version of the Razer Blade 15 using an i1 X-Rite Display Pro colorimeter and the software DisplayCAL.

Razer Blade Screen – How good is the display for gaming? 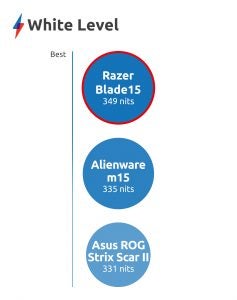 The Razer Blade 15 reports a white level figure of 349 nits, which surpasses the 300-nit average by a respectable margin. This surpassed both the scores of the Alienware m15 and Asus ROG Strix Scar II, although only by fine margins.

The white level is the measurement of peak brightness, and while it’s always nice to have a glower of a display, it’s arguably one of the least important elements for picture quality. It does come in handy, however, if you’re using the laptop in bright conditions, such as outside in the sun glare, where dull screens can be almost impossible to see clearly. 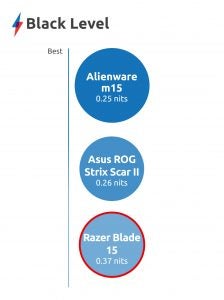 The closer you get to zero, the better when it comes to black levels. With anything under 0.3 generally regarded as being great at displaying really dark colours and shades. Black levels for the Razer Blade 15 are poor at 0.37 nits, so you’re not going to get super-dark colours when creeping through caves in Shadow of the Tomb Raider and the like.

This is one of the Razer Blade 15’s biggest weaknesses, which is only emphasised by its rivals’ scores, with the Alienware m15 and Asus ROG Strix Scar II achieving 0.25 nits and 0.26 nits respectively. However, there is an OLED option for the Razer Blade 15, which would drastically improve the black levels beyond what any LCD display can muster. You’ll have to pay an almighty £3150 for the luxury of an OLED Razer Blade 15 though, which is a hefty investment.

Contrast for the Razer Blade 15 is just below average (1000:1) at 949:1. This underwhelming score is most likely due to the poor black levels, with the display performing better with brightly lit scenery rather than dark images – essentially, you’re going to get more wow factor when playing the likes of the flamboyant Far Cry New Dawn than with more gloomy titles such as Metro Exodus.

Both the Alienware m15 and Asus ROG Strix Scar II displays brag superior contrast, which is a massive disappointment for the Razer since it’s significantly more expensive than its competitors. If you really want a premium display to match its premium components, you might just have to upgrade to the 4K offering, or invest in an external monitor. 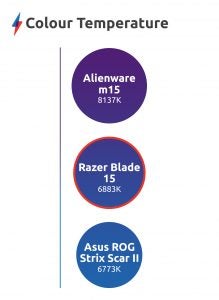 The visual colour temperature is an important metric to show how neutral a screen’s display is. If the figure is too low, it will see an unnatural red hue distort any on-screen image, while if the figure is too high, you’ll instead see a blue hue creep into the picture.

The visual colour temperature for the Razer Blade 15 is seriously impressive, with the 6883K result showing the Blade’s display is very close to neutral (6500K), edging ever so slightly into a cooler temperature.

This score is significantly superior to the Alienware m15, which has an uncomfortably cool display. The Asus ROG Strix Scar II, meanwhile, actually boasts a more neutral display, but we’re talking about very fine margins which likely won’t be visible to the human eye.

Razer Blade 15 Screen Colour Gamuts – How good is the display for photo work? 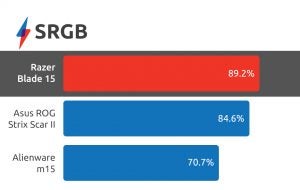 The Razer Blade 15 has one of the most vibrant and colourful displays we’ve tested, boasting an sRGB score of 89.2%. This score means the Razer Blade 15’s display is capable of showing off enough colours to accurately present digital animations, which is important for video game visuals.

This score comfortably bests both the Alienware m15 and Asus ROG Strix Scar II, although both of these laptops are significantly cheaper. However, designers should stay clear of the Razer Blade 15 if they want to edit photos and photography, since it posts low Adobe RGB and DCI P3 scores of 62% and 64.5% respectively. These scores a distance from what’s required to accurately display photo-realistic images.

The Razer Blade 15 has a solid display for gaming. In terms of picture quality, it doesn’t excel at anything, but at least hits the average for every metric besides black levels. The most glaring omission is G-Sync though, which means screen tearing could be a prevalent issue despite the high refresh rates on offer.

The important thing to acknowledge here is that while the Razer Blade 15’s display is perfectly suited to gaming, it won’t be able to double up as a capable-machine for creative duties if you want to accurately present photos and videos – the Adobe RGB and DCI P3 scores are too poor.