How powerful is Razer Blade 15?

The Razer Blade 15 can be fitted with some of the very best components currently available for gaming laptops. Nvidia’s RTX 2070 and RTX 2080 are two of the most powerful mobile graphics cards currently available, while you get the option of an 8th Gen or 9th Gen Intel Core processor, with both offering super-fast processing speeds.

We tested various Razer Blade 15 models with all of the above components to find out whether this high-end gaming laptop is worth the cash, and to see how its performance compares to its rivals.

We compared the Razer Blade 15 (both the RTX 2080 and RTX 2070 models) with two of our favourite high-end gaming laptops for both the CPU and GPU tests: the Asus ROG GL504 Scar II and Alienware m15.

Both the Asus ROG GL504 Scar II and Alienware m15 on test here rock a GTX 1070 GPU, which is obviously less powerful and cheaper than the Turing RTX 2080 found in the Razer Blade 15. However, the performance difference isn’t as substantial as you might expect. 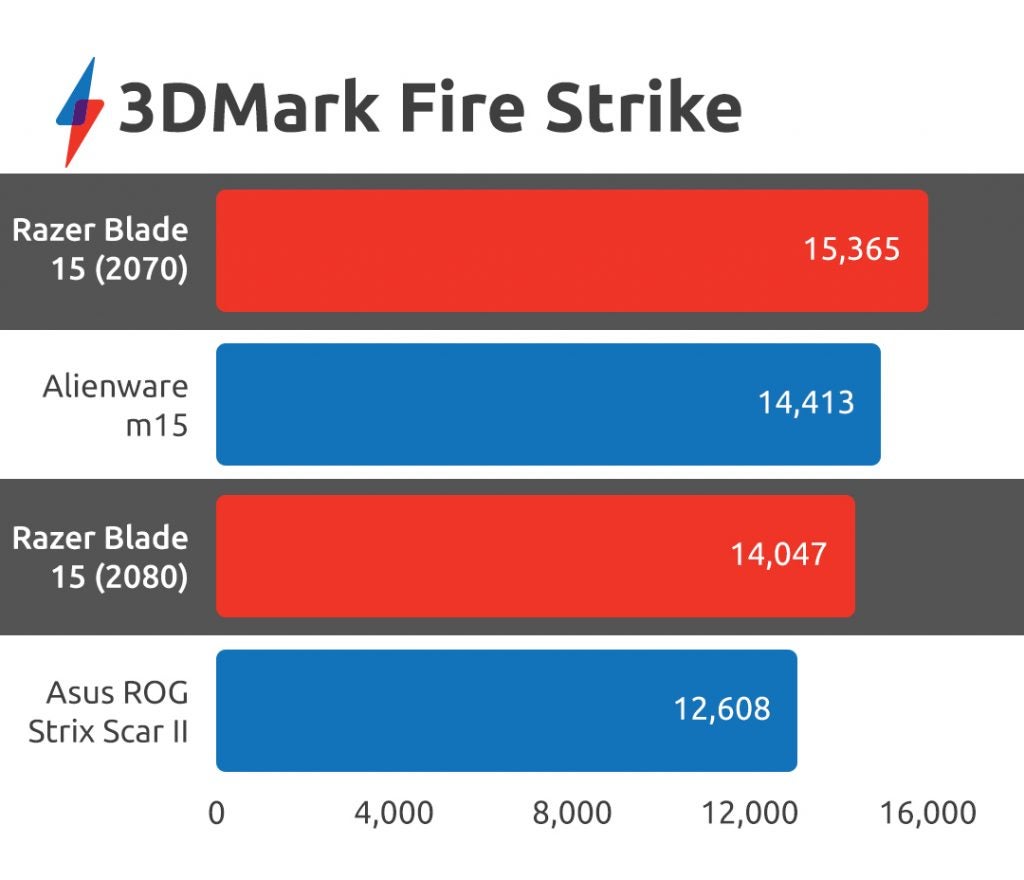 The Asus ROG GL504 Scar II actually bested the Razer Blade 15 (2080) in the 3DMark Fire Strike test, which measure the GPU grunt of a computer. Of course, such a test only determines raw power, and is not always accurate for real-time performance within a video game or creative app, but it still makes for an interesting read, suggesting there isn’t much in between the GPUs here.

I also used multiple in-game benchmarks to showcase the GPU performance of the Razer Blade 15. The three titles I chose were Shadow of the Tomb Raider, Ghost Recon Wildlands and Dirt Rally. I decided on the former two because they’re some of the most GPU-demanding titles available, while Dirt Rally is an excellent example of less intensive games released a few years ago. 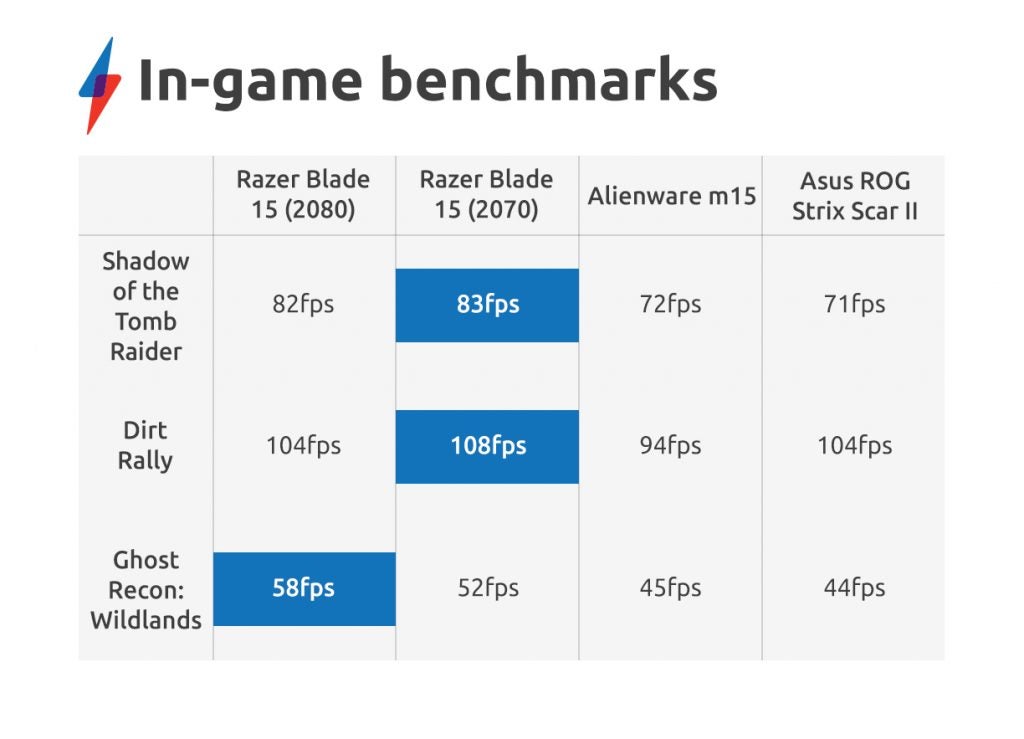 The Razer Blade 15 posted excellent performance results, edging out the Asus ROG GL504 Scar II and Alienware m15 which had previously offered the best frame rates in a gaming laptop.

With all of the graphics settings maxed out and resolution set to 1920 x 1080, the Razer Blade 15 managed a stonking 82fps in Shadow of the Tomb Raider, beating the Alienware m15 by 10fps. A similar pattern was seen with both Wildlands and Dirt Rally too.

But while the 10fps improvement over the Alienware m15 is substantial, I’m not convinced this GPU boost is enough to merit the extra £800 you have to cough up for the Razer Blade 15 RTX 2080 model. Razer’s argument here will be that as well as a frame rate boost, you also get ray tracing capabilities thrown in with the Blade 15.

The CPU performance is important for day-to-day tasks such as surfing the web, launching intensive applications and streaming video content. Given this is a gaming laptop, the Razer Blade 15 is very much capable of blitzing through such jobs, so you needn’t worry about all that. For a premium gaming laptop, the CPU performance is more vital for reducing loading times, particularly in complex strategy games such as the aforementioned Civilization 6.

The Razer Blade 15 already had a competitive CPU performance courtesy of the Intel Core i7-8750H processor, accompanied by 16GB of dual-channel RAM. But now Razer has introduced Intel’s i7-9750H processor as a more powerful option.

The benchmark results showed the 9th Generation Intel Core upgrade gave the Razer Blade 15 a slight boost in performance. That said, it wasn’t quite substantial enough to topple Geekbench 4 multi-core score of the Alienware m15 or the PCMark 10 score of the Asus ROG GL504 Scar II, despite their less glamorous internals. 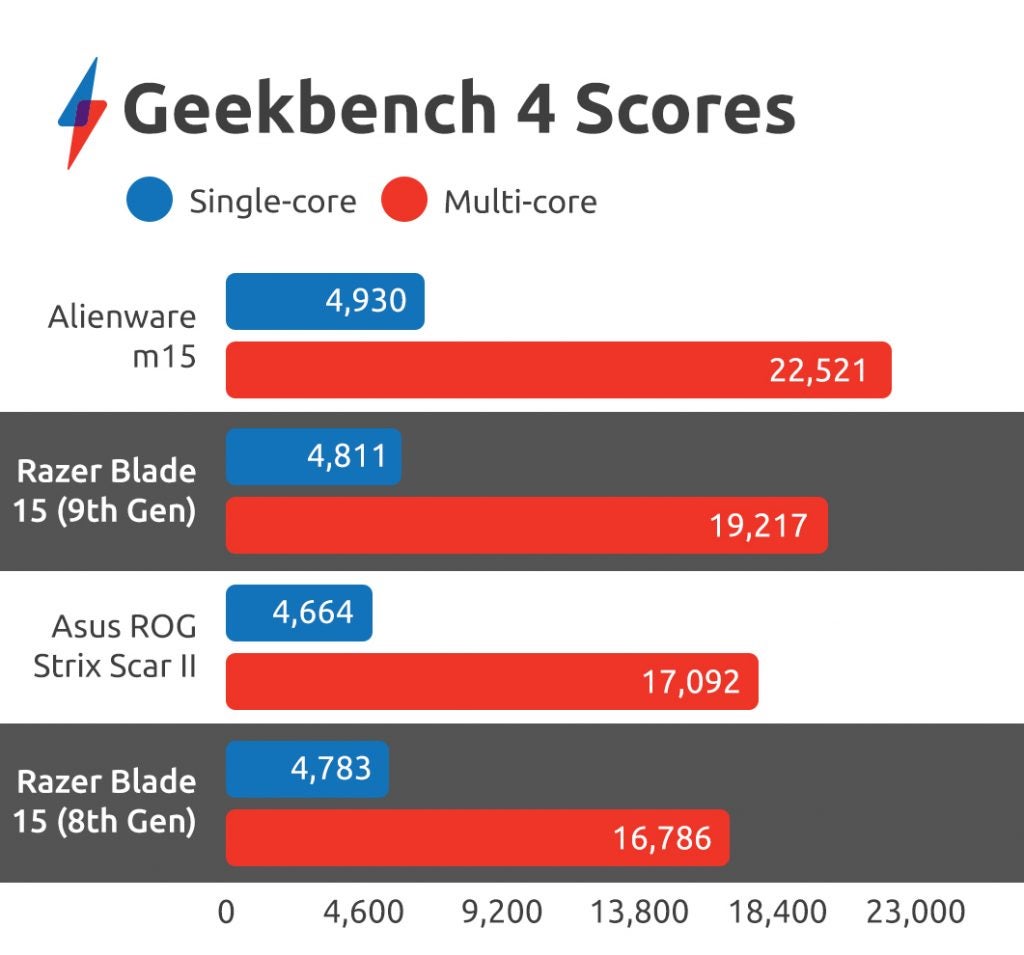 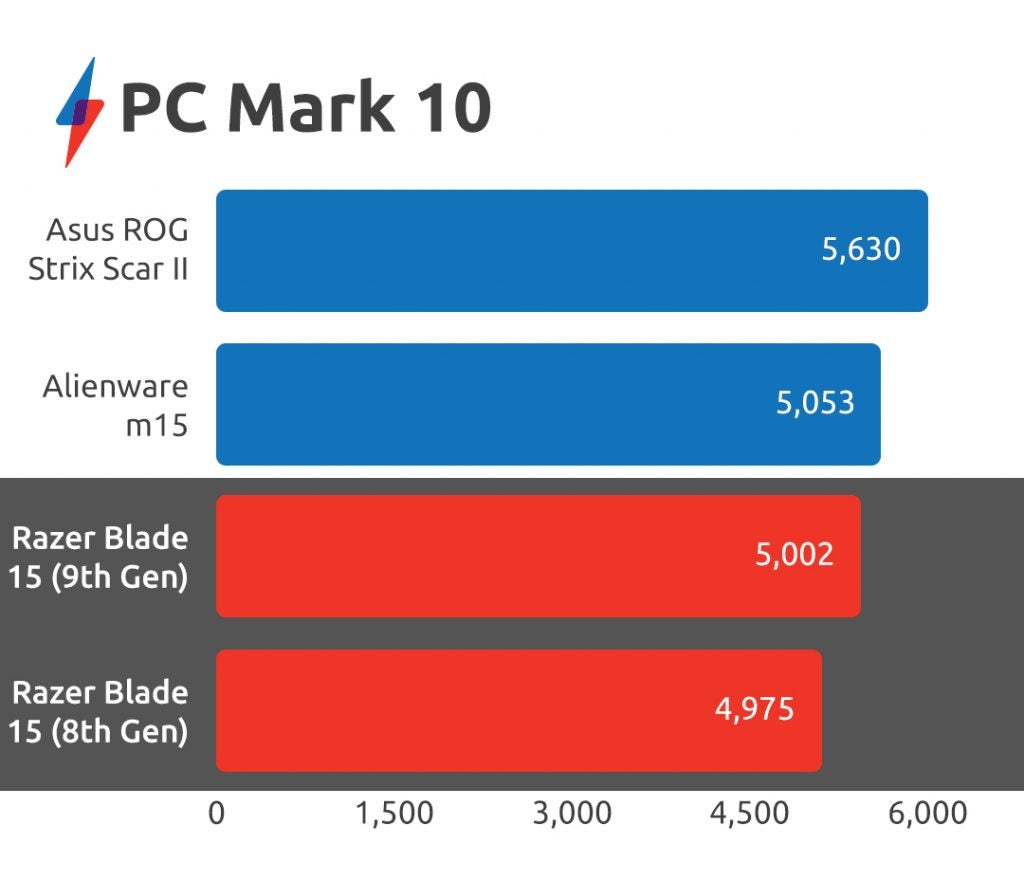 Again, these results only show raw performance. The PCMark 10 does simulate day-to-day tasks, such as web browsing and video streaming, to achieve its score, but the result still feels artificial rather than reflecting an accurate real-time performance. Also, the difference between all of these results is so miniscule that you almost definitely won’t notice the difference.

With that in mind though, the 9th Gen Intel Core upgrade isn’t as sizable as you may expect. Our tests suggest you’ll have a very similar experience with the cheaper i7-9750H processor, so this is the one we’d recommend going for.

Ray tracing is the star attraction here, rendering realistic and gorgeous lighting effects that gives scenery an extra gloss. Admittedly, the effects of ray tracing aren’t always overt, but small subtleties such as the reflections on a frozen lake in Battlefield 5 or the improved shadows in the Shadow of the Tomb Raider really help to enhance the visual experience. 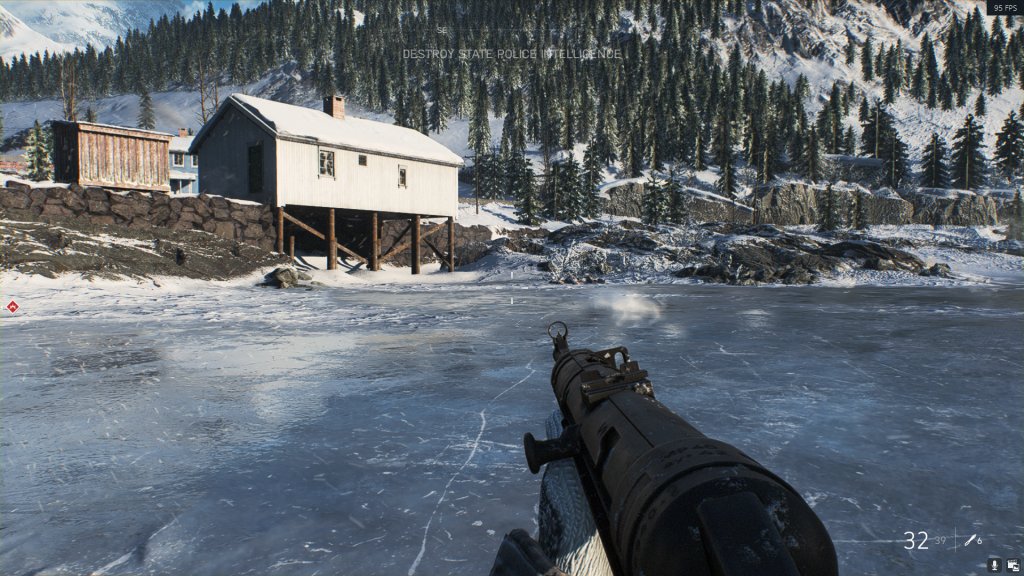 The good news is Nvidia’s DLSS technology is designed to remedy this performance drop by using AI to help alleviate the rendering workload of the GPU and in turn, boosting the frame rate. When activating DXR in Battlefield 5 with the Razer Blade (2070), the frame rate rose from 60fps to 70fps. That frame rate boost isn’t quite good enough to fully compensate the performance drop that ray tracing brings, but it’s still welcome.

However, while Nvidia claims DLSS doesn’t impact the visual quality, our tests prove otherwise. We took two screenshots of Battlefield 5, one with DLSS activated, and another with it turned off, and there was a noticeable difference between the two. With DLSS activated, the picture looked less sharp and a little more fuzzy. Small details, such as the texture on a stone wall, didn’t look as pronounced with DLSS enabled too. These are all subtle downgrades, but they’re still significant enough to question whether the 10fps boost is worthwhile. Nvidia is clearly aware of the loss in visual quality that DLSS brings, as it blocks the feature from working on an RTX 2080 graphics card when hooked up to a Full HD display. This means if you plumped for the top-end graphics card with the Razer Blade 15, and didn’t upgrade to a 4K then you won’t be able to use DLSS.

Nvidia’s logic for this is that frame rates are already beyond 60fps, so you don’t really need an additional performance boost. However, this means, thanks to the magic frame rate-boosting powers of DLSS, the RTX 2070 Razer Blade 15 actually offers a superior ray tracing performance than the RTX 2080 version. But with DLSS currently impacting the visual quality of the game, personally, I don’t think its absence is a big deal.

The Razer Blade 15 is one of the most powerful gaming laptops you can buy, with the RTX 2070 and 2080 GPU options offering an ideal performance for almost any game you throw its way. Whether these RTX cards are worth the hefty investment depends how much you care about ray tracing though, with the technology very much in its teething stage right now.

On a more sour note, the new 9th Gen Intel Core processor doesn’t provide a convincing enough performance boost to justify the added cost. If you’re weighing up which CPU configuration to opt for, we wholeheartedly suggest going for the cheaper option.