Pure is the king of DAB in the UK, and its first internet radio, the Evoke Flow, was one of just a handful of devices to win a TrustedReviews 10 out of 10 at review. Now it has a brother, the One Flow, which packs DAB and FM tuners as well as internet radio.

Put them next to each other, though, and it’s pretty clear that the One Flow is the ugly duckling of the pair. This is the core idea behind the dual Evoke and Flow streams of Pure’s radio line-up. Evoke gives you class and sophistication while One is for buyers who would rather save a few quid than have a posh-looking set. The Evoke Flow’s RRP is £149.99, and the One Flow comes in at just £99.99. Perhaps more important than its price competition with the Evoke, it also undercuts the Roberts 105 and Squeezebox Radio – two key connected rivals. 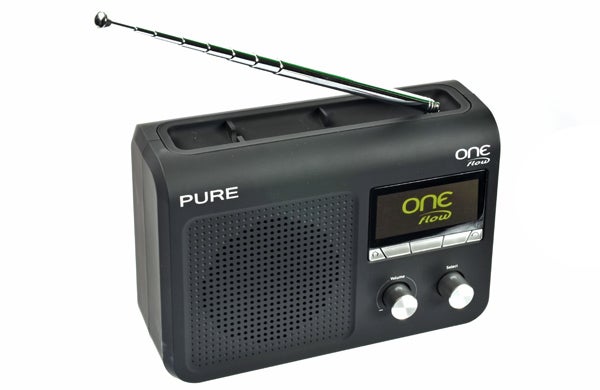 It’s a device of function over form, but offers a couple of aesthetic tweaks to detract from the otherwise utilitarian feel. The finish is matt black and has a soft touch feel. It’s a cut above most uses of plain glossy black plastic, looking and feeling more upmarket. The Select and Volume dials are textured with concentric circles, again adding that smidge of class. Still, if aesthetics are a concern, you really should be checking out the Evoke range, not the One. This radio feels solid in its own obviously plastic-derived fashion, but the Evoke feels premium.

The right edge is where the devices connections live. There’s a miniUSB to apply software updates, a 3.5mm headphone jack and a 3.5mm auxiliary input. The One Flow lacks an Ethernet port, but as Wi-Fi is built-in, we imagine only a tiny proportion of buyers – those obsessed with the efficacy of cables – would want one. 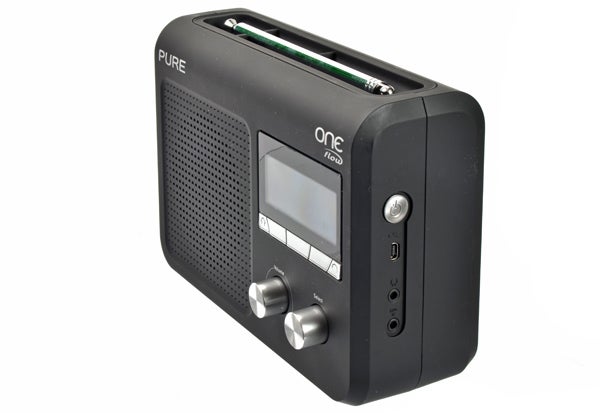 On the back is a battery cover. Buy an E1 ChargePAK (sells for £30-35) and you can use the One Flow out and about for around 20 hours. This is where the additional DAB and FM tuners will really come in handy – there aren’t too many Wi-Fi hotspots out in the countryside. 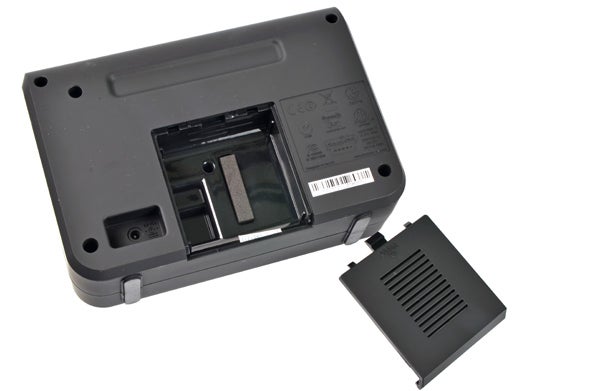 Up top is a telescopic aerial, around 80cm long when fully extended, which will pick up reception in all but the worst signal areas. You can’t play MP3s and other audio files directly from the One Flow, though, so for those times when all signal fails, you’ll need to invest in a jack cable in order to make use of that Aux input. There is provision for playing your music collection over Wi-Fi, but more on that later.

Switching between the tuners is all relayed through the very clear yellow-on-black OLED display, as all the nav buttons apart from Home, volume and Back are context-sensitive. This display can easily be set to switch off after a few seconds of idleness – a must-have feature if you’re on the hunt for a bedside set.

The Pure One Flow packs in a boatload of features, but unlike the Logitech Squeezebox Radio, it sticks to a fairly plain method of displaying them all. The screen is monochrome and its pixels are gigantic. Nothing’s changed in the three years since the Evoke Flow was originally released, it would seem.

It’s still a perfectly serviceable, clear interface – just getting on a bit. The main menu is a simple list of key features: Digital Radio (i.e. DAB, it still has top billing), The Lounge, Media Player, FM Radio and Auxiliary Input. 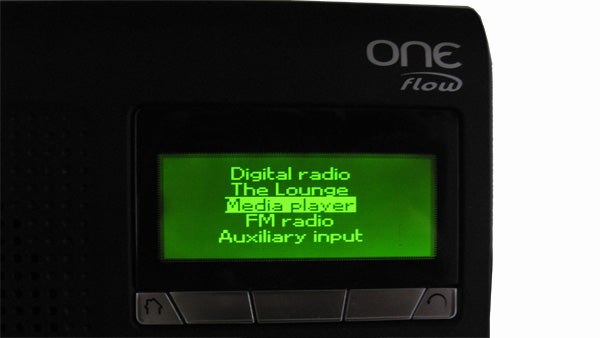 Media Player lets you plug into any shared uPnP music libraries available over the same Wi-Fi network the One Flow is connected to, but The Lounge is where most online features live. It gives access to Podcasts, Internet Radio stations and, once you’ve registered online, FlowSongs, which is Pure’s own music store.

It’s within The Lounge that the radio starts to feel as if it’s straining against the limitations of its interface. Internet radio stations and podcasts can be browsed by letter, or searched for by selecting each letter within a virtual keyboard using the Select dial. This is rather basic compared with some rivals, which let you single-out “local” (usually within the same country) stations, and often even have a separate sub-menu for BBC channels. 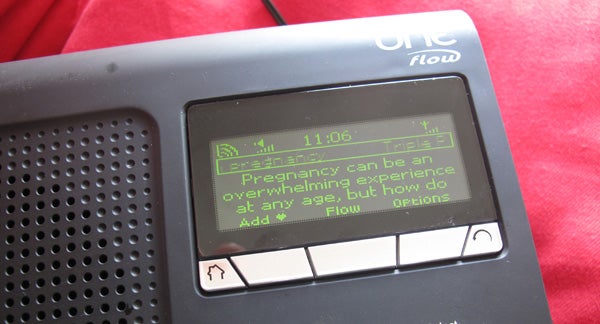 The Pure One Flow does let you assign favourites for Internet Radio stations, plus the FM and DAB tuners, but for a casual flick through what the world’s airwaves have to offer, this radio doesn’t lead the pack.

In terms of pure content, though, it’s hard to fault. The BBC’s Listen Again content and thousands of podcasts are all available here. Listening to it all would take several lifetimes.

If you’re willing to cut the ties with traditional radio broadcasting entirely, the Logitech Squeezebox still does significantly more – offering Spotify streaming, plus access to a handful of other services. However, the mix of new and old that’s within the Pure One Flow is arguably much more flexible. Find yourself without an internet connection? Switch to DAB. DAB signal start to act up? Step down to FM. 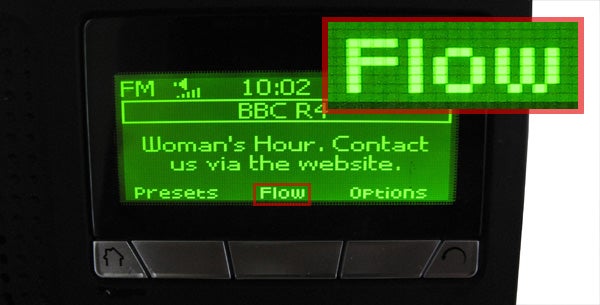 Pure is also starting to integrate the connected and non-connected radio worlds, in a really rather fabulous way. We doubt whether the FlowSongs music store will pull many away from Amazon MP3 or iTunes, but part of its added functionality here is that it can be used to identify songs. As long as you’re connected to Wi-Fi, a contextual Flow button appears whenever you’re listening to a station. A tap on this will send a snippet of the song over to Pure’s servers for identification, and let you buy it should it be available. It’s like having Shazam built into your bedside radio. Using this service will eventually cost you £2.99-a-year, but as soon as we signed-up we were granted a free 12-month trial. 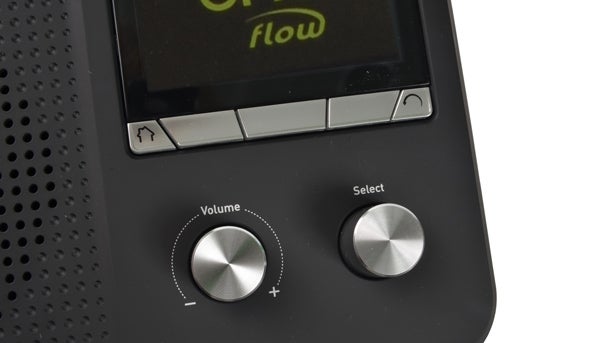 Any purchased music isn’t stored on the One Flow – it doesn’t have its own internal memory – instead staying in the cloud, from which it is streamed. You can access the store from your browser too, and as music from the service is DRM-free, you can download it and play it on other devices, too.

An extra Pure-exclusive treat is a wealth of free sound loops – loads of the things – from a Moorhen’s call to “Dog Barking in the Wind” and the sound of 1994 Toyota Supra engine. Some require a certain masochistic streak to want to listen to, but equally some relaxation classics are in there too.

The Pure One Flow is cheaper than the Evoke Flow, but it uses the same basic speaker arrangement. There’s a single 3in full-range driver, firing out of the front grill. No tweeter, no bass radiator – it’s a very simple setup.

Like most of Pure’s radios, though, it performs very well, considering. It has the warm, surprisingly bassy sound that we’ve come to know and love over the years of listening to the company’s DAB boxes. The sound is still small-scale – not a hi-fi-replacement – but it doesn’t have the very boxy, traditional worktop radio sound we heard recently in the Roberts Wave 105. 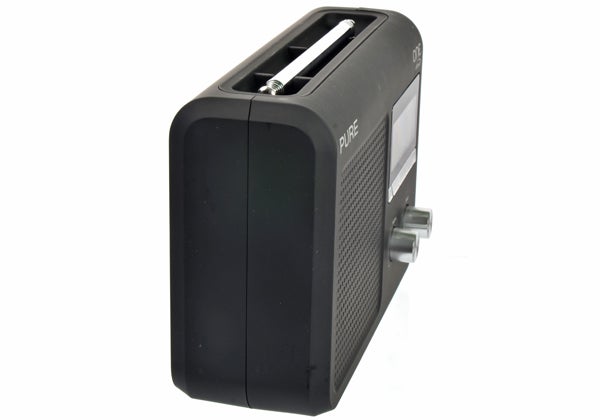 Its fun, bouncy sound works well with music and isn’t too harsh on the lower-quality stations doing the rounds on the DAB spectrum – some use such a low bit-rate as to be all-but unlistenable. Some voice-only broadcasts can make the One Flow sound a little too bass-driven – a tiny bit muffled – but it’s one of the best-sounding models of its size. It’s a pity there are no equalisation options available here, as having some basic control over bass and treble levels could have solved this small issue.

Switching frequently between DAB, FM and Internet stations during our testing, we did find that the maximum volume varied dynamically depending on the source. DAB is a little quiet in comparison to many net stations, which might become a problem if it has to contend with the sound of DIY or an extractor fan (if, like us, you enjoy a spot of DAB while cooking). It is a little louder than its Roberts rival, and at least on-par with other small radios. 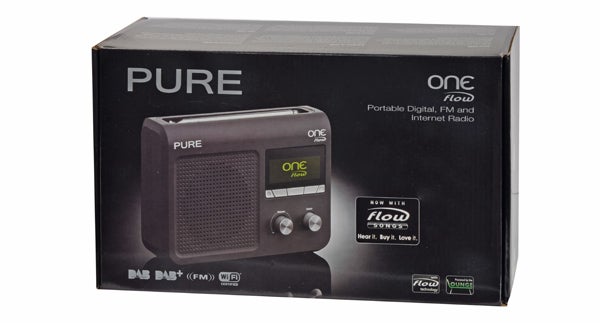 If you need greater volume, it’s worth considering a slightly larger radio, such as the Kogan Deluxe. Such a device comes with its own set of limitations, though – lack of portability, no battery-power potential, and the sheer size makes it unsuitable for many situations.

As a companion to another hi-fi, used for casual listening, days out and afternoons in the garden, the Pure One Flow is an absolute winner. It’s cheaper than most of its rivals, offers a largely-comprehensive spread of radio features and sounds pretty good too. It doesn’t deserve a spotlit position on a mantelpiece like the Evoke Flow – and as that model is available from some retailers for as little as £30 more, consider whether it might be a better bet. If you consider looks to be considerations of shallow folk though, the One Flow is one of the best-value DAB/Internet combos around.

DAB veteran Pure has once again come up with the goods. The Pure One Flow doesn’t look anywhere near as snazzy as the dashing Evoke Flow, but it has all its key features, at a significantly lower price. Thousands of internet radio stations and podcasts are at your fingertips, while there are DAB and FM tuners on-hand too, should you venture away from a Wi-Fi zone. Pure is gearing-up with its own online features too, letting you buy tracks directly from the device. It doesn’t have Spotify streaming like Logitech’s internet radios, but the One Flow offers superb all-round flexibility.