The Philips 55POS9002 is the company’s second stab at delivering an OLED TV. It’s the successor to the impressive Philips 55POS901F. Its £2200 price makes it one of the cheapest OLED TVs to date – and despite its affordability, it manages to combine a powerful new picture processing engine with Philips’ unique Ambilight technology. The result is a TV that’s a genuine, if surprisingly different, challenger to LG’s OLED55B7.

The 55POS9002 certainly doesn’t look like a budget OLED TV. Its gleaming metallic finish looks opulent and uncompromising, and the frame around the screen is as trim as any high-end competitor.

This being a Philips TV, the design is further enhanced by Ambilight. This is where rear-mounted LEDs cast pools of coloured light from the TV’s left, right and top edges. These light pools can be set to a specific colour and intensity of your choice, or they can – mesmerisingly – track the content of the images you’re watching with startling tonal and positional accuracy. 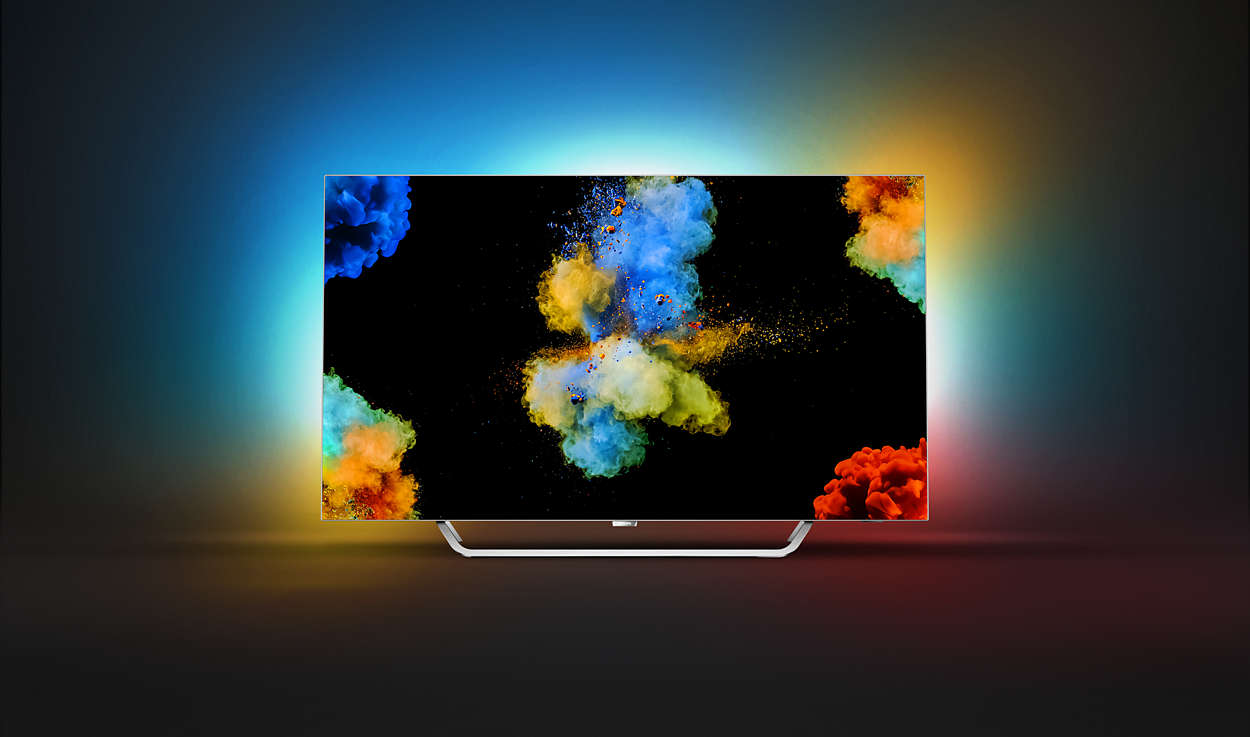 The ‘barely there’ nature of the 55POS9002’s frame is exaggerated by the minimalistic design of the open-frame desktop stand. Note, too, that this stand runs for only around two-thirds of the TV’s width, meaning you’ll be able to place the 55-inch (W1230 x H715 x H47mm) screen on a relatively narrow piece of furniture.

While the 55POS9002 may look high-end from a distance, its build quality does slightly betray its relatively budget nature. The screen is quite light and plasticky under the metallic sheen, while its stand is startlingly flimsy pre-attachment, only becoming rigid enough to do its job once you’ve screwed it into place.

The 55POS9002 ships with a large, weighty remote control that includes a full qwerty keyboard on its rear. This proves handy for typing in passwords and email addresses, or inputting search field data.

Unfortunately, the bit that handles navigation is anything but handy. Poorly spaced and defined buttons make accidental button selections inevitable, especially  in a dark room.

The most important features of the 55POS9002 are that it offers a 4K HDR OLED screen and an Ambilight design for just £2200. But that’s only the start.

The 55POS9002 also marks the first appearance of a brand-new Philips processing system. Dubbed P5, it apparently draws on 25% more power than any previous Philips imaging engine. It also pulls together processing elements onto one chip that used to be spread across three separate chips, for superior ‘on-the-fly’ results delivered in a more logical and effective order than before.

While the 55POS9002 joins pretty much every other TV these days in not supporting 3D, it can handle two types of HDR: the industry standard HDR10 platform, and the up and coming Hybrid Log-Gamma (HLG) system destined to become popular with the advent of HDR broadcasting.

There’s no support for either the Dolby Vision or HDR10+ platforms, however.

The OLED panel at the 55POS9002’s heart is a 2017 model, as revealed by its high peak brightness measurement, while its smart features are predominantly provided by Android TV .

I’m no great fan of Android TV, finding it overbearing, cluttered and dictatorial. Philips does provide access to HDR/4K versions of Amazon and Netflix. Android doesn’t currently cover all of the UK’s key terrestrial catch-up services, though – and while I gather Google is working on adding the Freeview Play app to Android TV, there’s no hint of a likely launch date yet.

The 55POS9002’s connections are impressive for its money. All four of its HDMIs can handle 4K and HDR. Plus there are three USBs for multimedia playback or recording to USB HDD from the TV’s Freeview HD tuner. 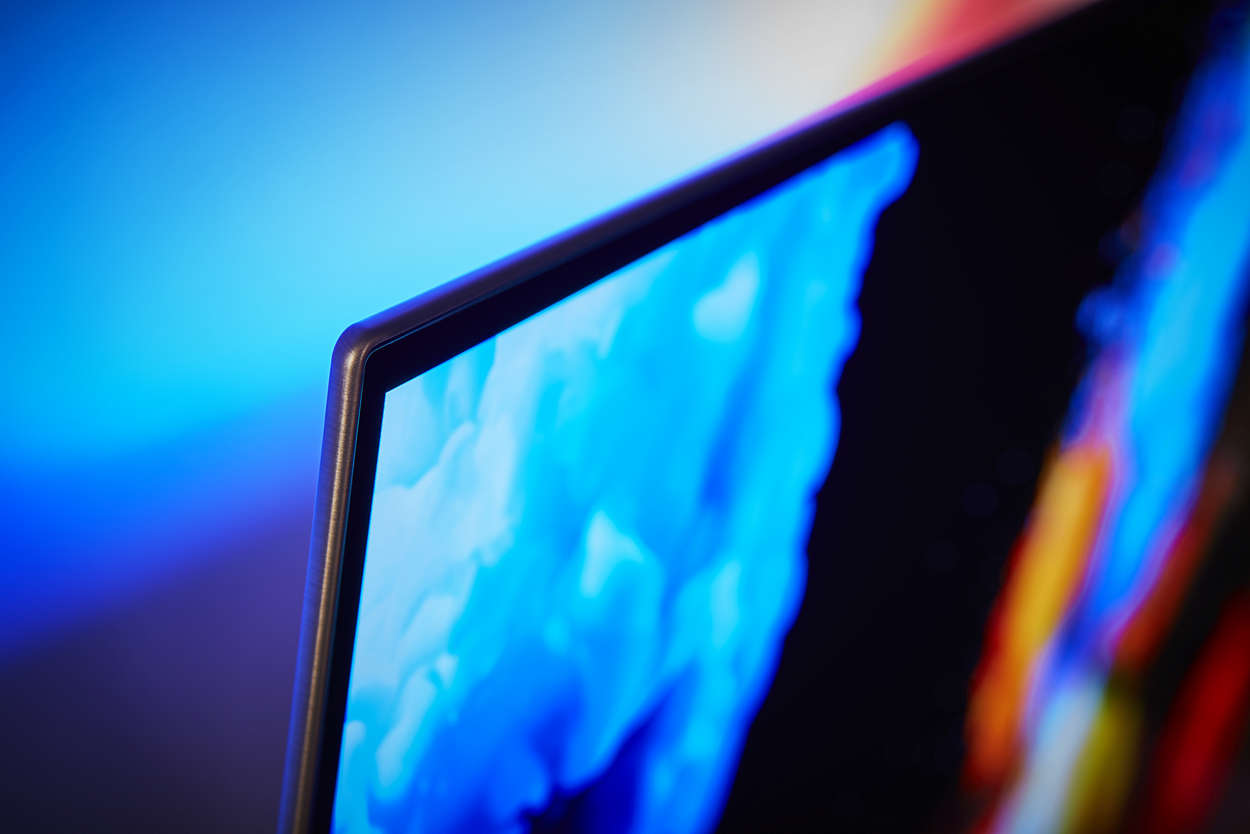 The 55POS9002 is relatively easy to put together by today’s standards, and installation is reasonably straightforward for a TV built on the Android smart platform.

Philips’ main menu system is rather complicated and long-winded – although in fairness, this is partly because Philips lets you control so many aspects of the 55POS9002’s images and video processing.

There are a few fundamental picture setup pointers I’d recommend you follow. For instance, with 4K sources, turn off all noise-reduction systems. When watching HDR, meanwhile, I recommend using the Movie picture preset, since this is much brighter than the next-brightest Natural HDR mode; 740 nits from a 10% white HDR window versus 640 nits.

I also pushed up the brightness to 53/54 for HDR viewing, which I was able to do without fear of the sudden infusion of greyness that can usually be seen with LG’s OLED sets.

In addition, set colour to Normal rather than the default Warm mode when using the Movie HDR mode, to prevent colours occasionally looking a little orange or peaky.

Feel free to leave on the Ultra Resolution feature, since it improves sharpness without causing issues with grain or stressed edges. Finally, I recommend using Philips’ impressive new motion processing system on its lowest power setting, since this can reduce judder quite effectively without any side effects. 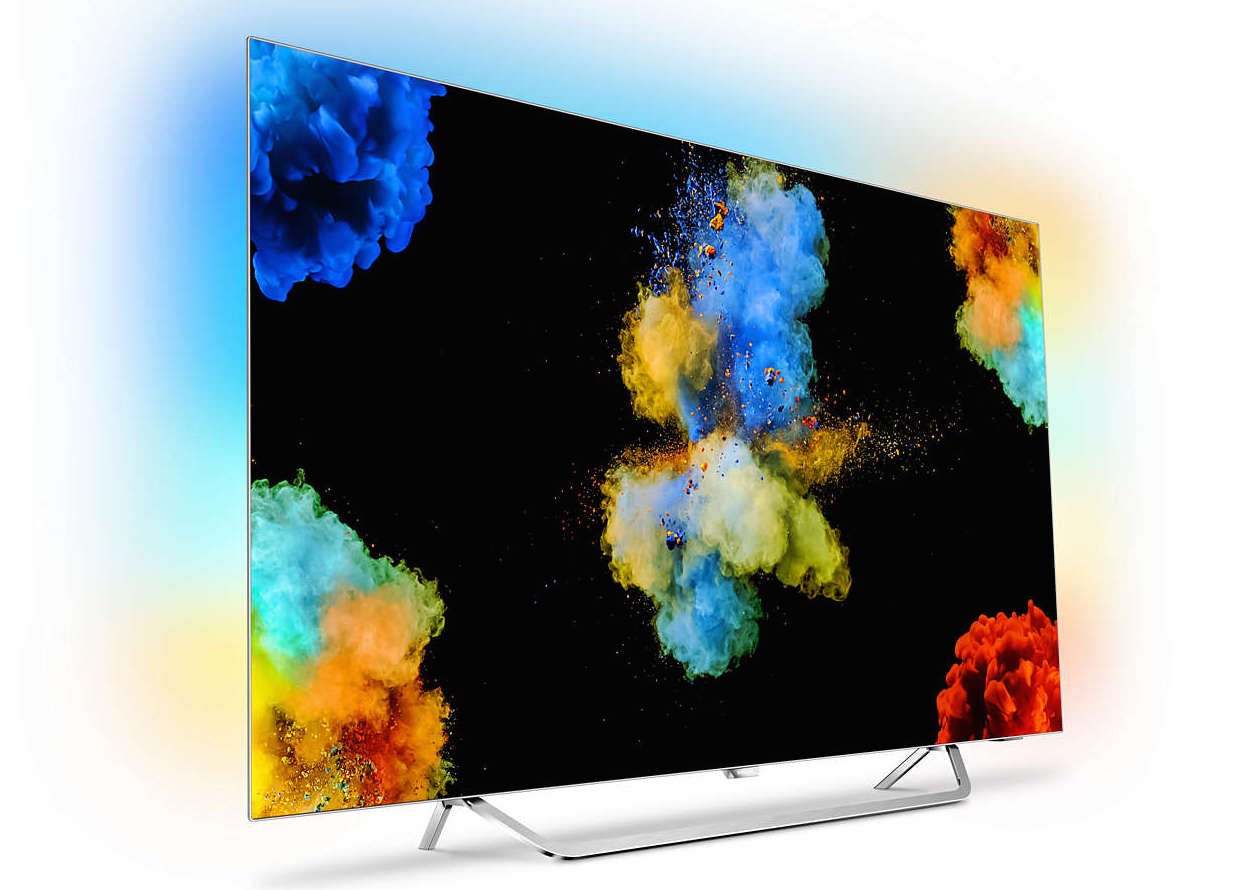 Philips TVs have earned a reputation in recent years for being unusually aggressive with their pictures, serving up images that are sharper, more explosively coloured, more dynamically lit – but often more processed-looking than those of its rivals. The 55POS9002 couldn’t be more different. And even though I’ve actually been a fan of many of those previous Philips TVs, the 55POS9002’s more subdued approach proves to be anything but a weakness.

For instance, take the 55POS9002’s handling of the dark scenes that OLED TVs thrive on. At first glance I felt slightly disappointed, as parts of pictures that would normally look immaculately black on most OLED TVs looked slightly greyer on the 55POS9002. The longer I watched it, though, the more the Philips set’s dark scenes grew on me. While they might not look as black, they do contain outstanding detail, subtleties of colour and greyscale information. Especially at the ‘just above full black’ light levels that can prove a headache for OLED technology. 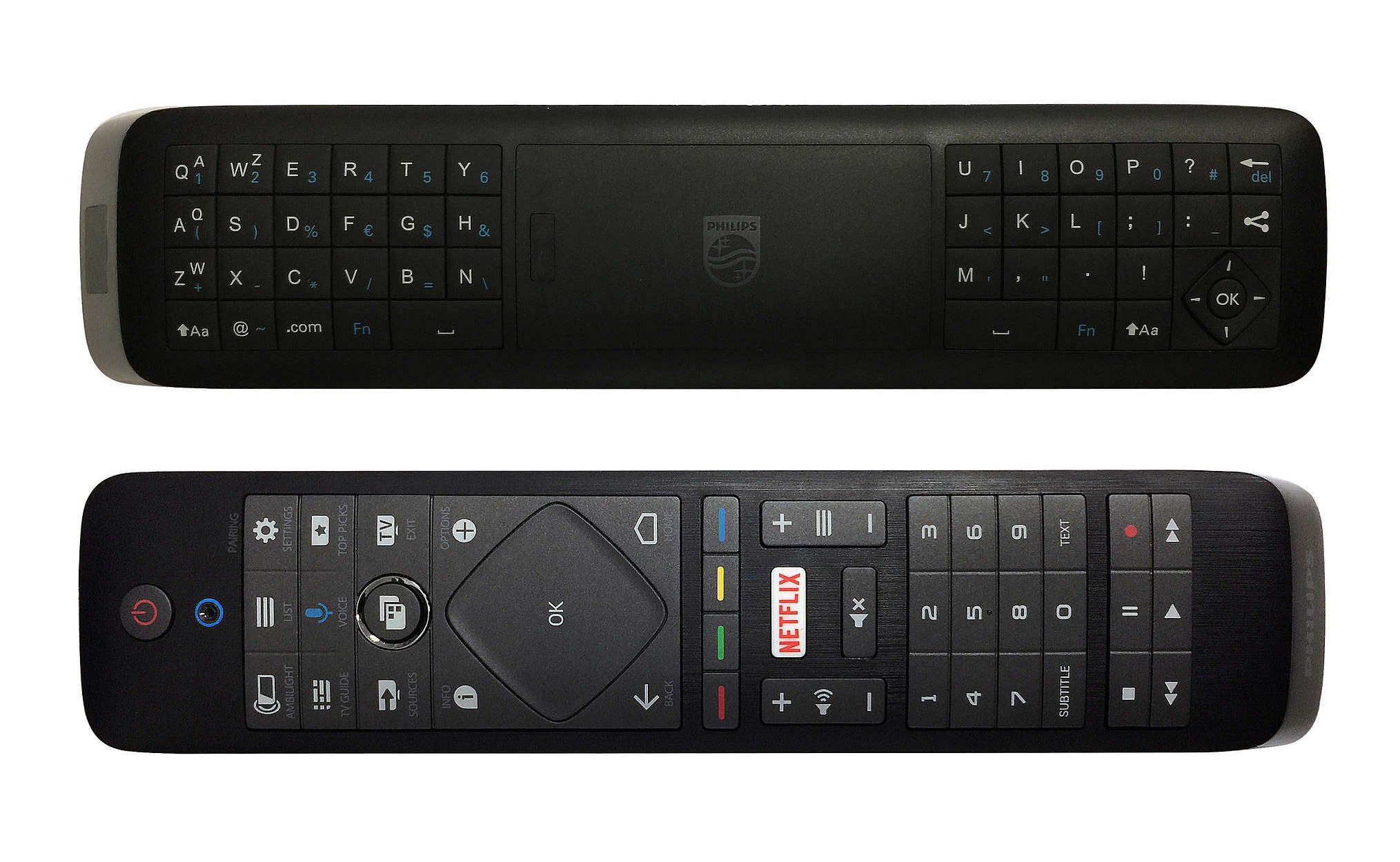 In addition, the 55POS9002 almost completely avoids the sudden stark jumps in underlying black levels and brightness that you can get while watching HDR content on LG’s OLED TVs – especially if you’re using their brighter Standard preset rather than the Movie one.

This means that while the 55POS9002’s dark scenes might not deliver quite so much ‘shock and awe’ as those of rival LG OLED models, they do look slightly more refined, consistent and immersive. The impressive detailing can also give dark scenes a better sense of depth.

Infamously dark 4K Blu-ray HDR moments, such as the night-time scenes in Exodus: Gods And Kings or the access corridor of the alien ship in Arrival, appear on the 55POS9002 with no sign of the vertical banding issues – caused by uneven light control – that appear on the otherwise-mighty Panasonic 65EZ1002 OLED set.

The 55POS9002 continues its startlingly refined, natural approach to pictures with its sharpness and detail. Right out of the box it delivers 4K images with gorgeous detail and purity, but not to the extent that it causes the sort of over-stressing of object edges and grain or fizzing seen with most previous Philips TVs. Even Philips’ Ultra Resolution feature, which has previously tended to come on too strong, boosts sharpness without making the picture look forced here. 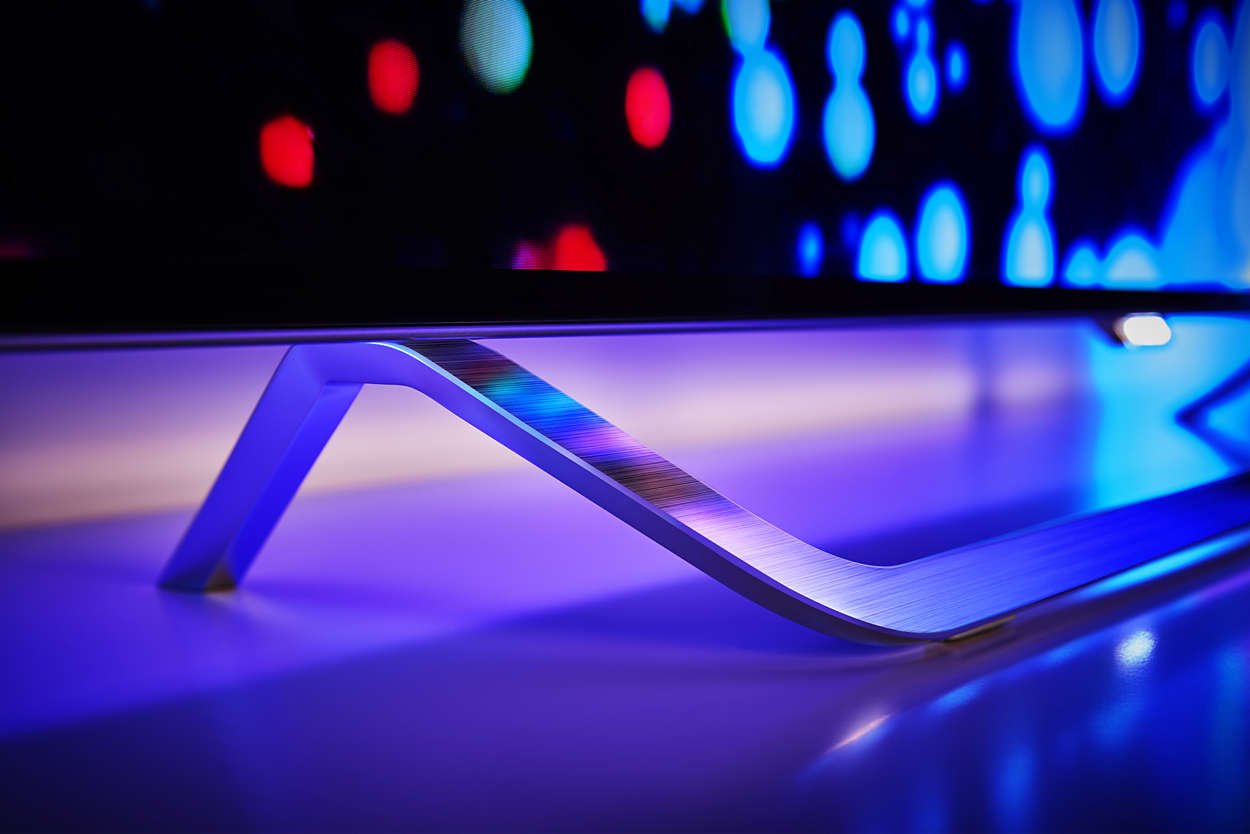 Colours favour subtlety, as opposed to the extreme Philips vibrancy that can look spectacular but hide small shading and tone differences. Again, this can rob the 55POS9002’s pictures of instant impact versus LG’s OLEDs – especially as the LG’s pictures are also slightly brighter (in Standard mode). But there’s slightly less noise and more insight in the Philips set’s colour reproduction, especially in dark scenes.

I’m not saying that the 55POS9002 is flat-out better than its closest rival, the LG OLED55B7. Some will prefer the bolder look of the LG set. But the way Philips’ new processing system addresses the 55POS9002’s OLED panel certainly offers a different approach. Some AV fans – especially those who previously loved plasma technology – will lap this up.

Philips has even managed to extend its new focus on out-of-the-box naturalism to motion handling. Traditionally, Philips’ motion processing systems have been aggressive, causing too many distracting side effects, resulting in a picture that looks unnaturally and uncinematically fluid. For the 55POS9002, Philips has introduced a new Movie motion setting that reduces judder with more restraint, and without throwing up distracting side effects.

For gaming, the 55POS9002 is a good rather than great. With its Game picture mode activated, I measured a solid on-average input lag measurement of 35ms – although note that this rises to more than 50ms on occasion.

Turning finally to the 55POS9002’s sound: it isn’t as good as Philips’ debut OLED TV. That model carried a built-in soundbar, and Philips’ decision not to include one here means the 55POS9002’s sound isn’t as rich in bass, scale, directness or clarity. However, it still sounds richer, more open and louder than you might expect from a TV with so little bodywork to work with. 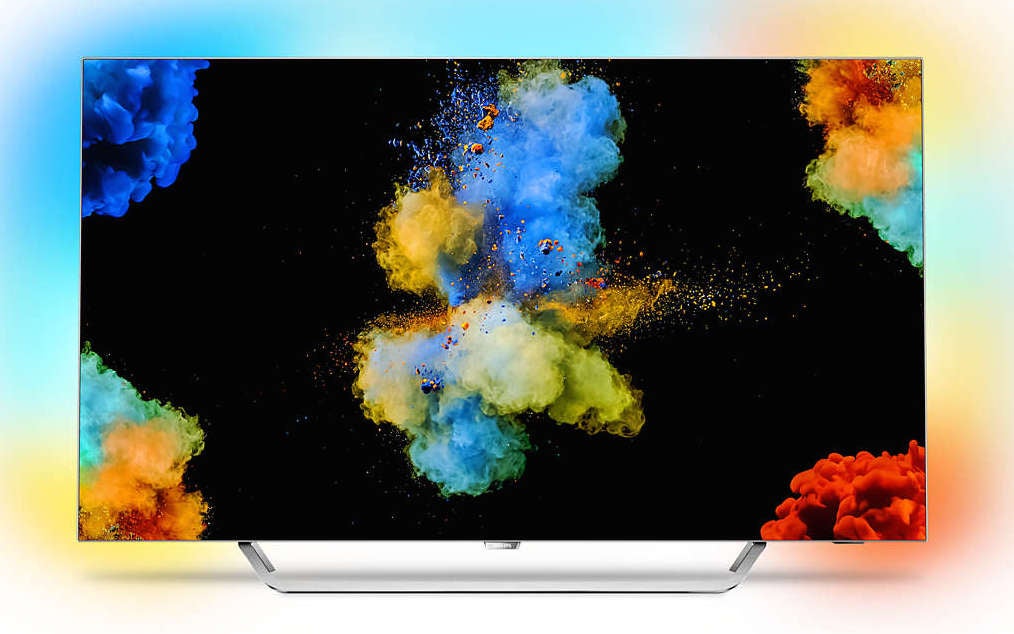 Although the Philips 55POS9002 offers the detail and subtlety likely to appeal to serious cinephiles, its pictures aren’t as dynamic and rich in colour as those of LG’s latest OLEDs. That makes models such as the LG OLED55B7 potentially more attractive to people whose tastes lean towards the dramatic.

Also, some of this year’s best LCD TVs – most notably the Sony 55XE9305 – can deliver almost twice the brightness of the 55POS9002, unlocking more of HDR’s full light range potential. However, there’s a trade off for this LCD brightness in the shape of backlight clouding around bright objects, which you just don’t get with OLED screens.

For a substantial corner of the serious AV world, the 55POS9002’s focus on subtlety, detail and naturalism will prove hard to resist – especially when they clock it’s price.