The Philips 42PFL6188S’s 3D playback is good fun, meanwhile. Since it uses passive technology it’s immune (so long as your vertical viewing angle is less than 13 degrees) to the crosstalk and flicker issues you can get with active 3D technologies, and delivers more brightness and colour vibrancy than your average active 3D TV.

Also, since the Philips 42PFL6188S’s screen is relatively small by today’s standards at 42 inches, you’re less aware of the weaknesses of passive 3D – slightly reduced image resolution, jagged object edges and horizontal line structure – than you tend to be on larger passive 3D screens.

We’ve already hinted at the fact that the 42PFL6188S’s pictures can suffer problems if you don’t put in plenty of ongoing effort with the TV’s settings, and as a final little irritant, we measured the screen’s input lag at 66ms – which is high enough to reduce your skills when playing video games built around timing and response speed.

The Philips 42PFL6188S is able to finish on a decent high, though, thanks to its audio. Despite its super-skinny frame it’s able to produce a reasonably open-sounding and loud soundstage, helped along considerably by the woofer built into the rear panel 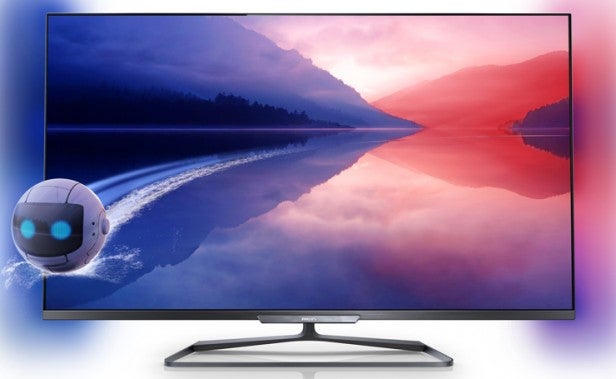 There aren’t many reasons why you shouldn’t at least think about it. For starters, if you’re keen on getting a set with passive 3D it’s far better than any passive 3D rivals bar the Philips 42PFL6008 series when it comes to producing a good contrast performance. It also slightly outperforms it without costing a penny more, and it looks great for its level of the market.

If you’re after something cheaper the Samsung UE40F6400 and Sony 42W653A both offer good performances and superior online services (especially when it comes to the amount of video streaming services on offer) for £200-£300 less. Though their pictures aren’t quite as strong overall as those of this Philips.

Also worth considering as an alternative to the 42PFL6188 if you have a taste for home cinema is the Samsung PS51F5500, which gives you another nine inches of picture and much richer black levels at the expense of some brightness.

For more alternatives, head to our best TVs round-up.

The Philips 42PFL6188S is another successful step in Philips’ long though still challenging road to recovery in the UK TV market. In fact, the only difficulty with it so far as Philips is concerned is that it arguably renders the brand’s own 42PFL6008 redundant.