The Samsung PS51F5500 is a circa £700 mid-range 51-inch plasma TV (also available as a 60-inch) that includes all Samsung’s latest Smart TV features, along with active 3D playback, and a strong suite of multimedia playback features.

It’s a tempting price considering the features, but how does it shape up compared with the latest Panasonic plasmas and Samsung’s own hugely impressive Samsung PS51FF8500 plasma set?

Design wise, the Samsung PS51F5500 comes as a bit of a
shock compared to the super skinny frames on Samsung’s latest LED models, such as the near framless Samsung UE40F8000.

The size of
its bezel – especially along the bottom edge – is very wide by modern TV
standards, and the finish is slightly plasticky looking. We do, though,
like the little transparent trim around the outer edge, and the
cross-style stand.

The extent to which the TV’s rear sticks out is a bit of a shock, too. As well as making the TV less suitable than most as a wall-hanging option, its depth makes the set feel a bit old-fashioned, and raises concerns about the ‘vintage’ of the plasma panel design inside.

One further issue about the rear panel is that some of the connections – including the important RF and Ethernet ports – stick straight out of the TV’s rear, which further damages the Samsung PS51F5500’s wall-hanging potential.

While in an ideal world we would have liked a bit more style and build quality on a £700 to 750 51-inch TV, though, it will be easy enough to see past these concerns if the set’s performance and features turn out to be strong enough.

And the Samsung PS51F5500’s connectivity can’t be reasonably faulted. The RF and Ethernet ports mentioned above are joined by two USBs and built-in Wi-Fi, which does its multimedia potential no harm at all. These permit playback of all the most popular video, photo and music file formats from USB drives or networked DLNA computers.

The only slightly disappointing thing about the Samsung PS51F5500’s connections
is that there are only three HDMIs rather than four. That said, three
should still be enough to satisfy most households.

This Smart TV support is almost totally uncompromised versus the system found on Samsung’s flagship TVs this year, with the only difference being that as there’s no built-in camera with the Samsung PS51F5500, you’ll have to add an optional external one if you want to make use of the TV’s Skype, gesture control and automatic user recognition features. 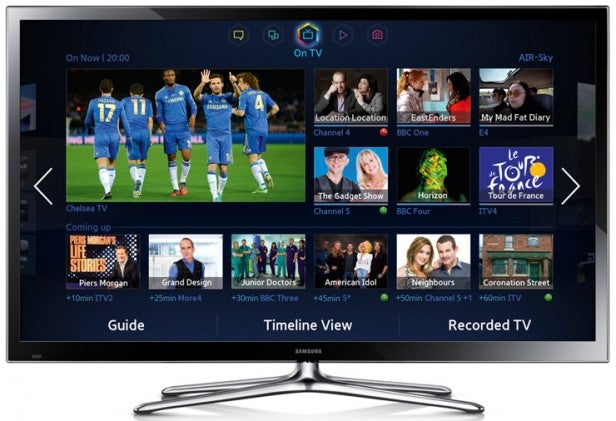 Samsung’s Smart TV platform is comfortably the most advanced Smart system the TV currently has to offer. It’s the only brand to carry all the UK’s catch-up services (BBC iPlayer, ITV Player, 4oD, and Demand 5), as well as other subscription big hitters like Netflix and Lovefilm, and its ‘S Recommendations’ system does a great job of tracking your viewing habits and suggesting things you might like.

There are a few presentational/ease of use issues with the Smart TV system, as detailed in our in-depth Samsung 2013 Smart TV review.

But there’s one further issue to add where the Samsung PS51F5500 specifically is concerned, namely that some parts of the Smart interface run a bit sluggishly, presumably because this cheaper set uses a dual-core rather than quad-core processing engine.

This can be particularly aggravating when using the voice recognition system, as there’s quite a lengthy delay between first pressing the Voice button on the remote and the voice menu appearing.

Used as the main TV for the review period
Tested for more than a week
Tested using industry calibrated tools, discs and with real world use
Tested with broadcast content (HD/SD), video streams and demo discs
Next
F5500 vs F8500 and Picture Quality Review