The GTX 1050 Ti outpaced its competition in every test. In the Tomb Raider benchmark, its average of 43fps was well ahead of the GTX 1050 Acer and four better than the Dell, and its 60fps Middle-earth: Shadow of Mordor result was even further beyond the competition.

The PC Specialist will only struggle with the toughest titles. I ran Deus Ex: Mankind Divided at its Ultra settings, and this laptop could manage an average frame rate of only 27fps – so its settings or resolution will need to be dialled back to achieve smooth gameplay. 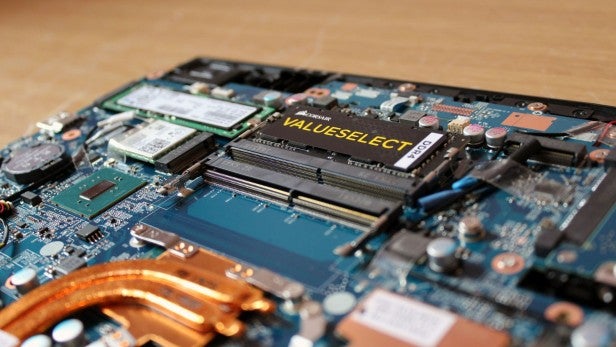 That’s entirely expected from a £999 machine, though, and it’s only going to be an issue with the most intensive games. The vast majority of titles will run well at 1080p, whether it’s the latest AAA releases or speedier, less demanding eSports games.

The lesser application scores are no surprise once you take the components into account. The Core i7 is a great chip, but its 16GB of memory is single-channel and runs at 2133MHz. That’s slower than the Dell, which had single-channel memory running at 2400MHz; it’s further behind the Acer still – that machine had dual-channel 2400MHz DDR4.

Nevertheless, the PC Specialist isn’t a slow laptop, and it has the power to handle everyday computing and tougher multi-tasking. It will run office software, edit videos and stream gameplay without balking, as well as playing most games.

The PCIe (PCI Express) SSD is better. Its read and write scores of 2,032MB/sec and 1,257MB/sec are several times quicker than the SATA drives in the Acer and Dell notebooks, and I didn’t experience any issues with boot or loading times – the PC Specialist feels consistently zippy. 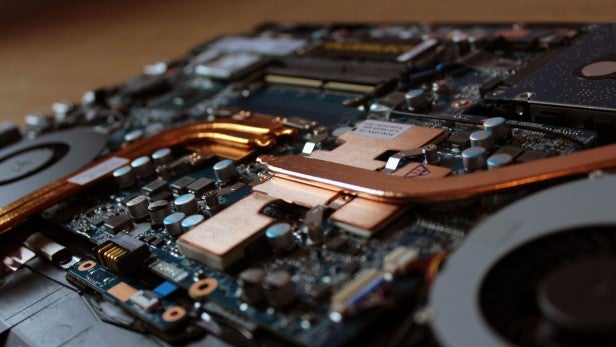 It was pretty good in thermal tests, too. In our toughest stress test the CPU and GPU never went beyond 82°C, and most of the laptop’s exterior surfaces became only slightly warmer. The fans were consistent and pretty quiet.

The only issue is the exhaust on the right-hand side – if you’re using a USB mouse immediately next to the vent, you might feel a little heat.

The PC Specialist’s 1080p matte screen has an IPS panel, but it’s sorely lacking in quality. The biggest problem is the lack of colour accuracy and breadth: the average Delta E (where a number closer to zero is ideal) of 5.38 is wayward; the colour temperature of 7,406K is too cool; and the panel rendered only 56.7% of the sRGB colour gamut.

Those underwhelming benchmark scores are immediately obvious on-screen. The display looks lifeless, with a slight blue pall across white shades, and it’s gloomy – even with its brightness turned up to the full level of 279 nits. 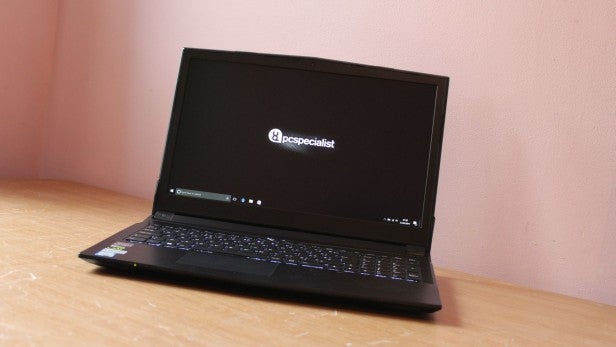 Test images that should be bright looked dull – as if going from a sunny day to a cloudy evening – and games looked washed-out and underwhelming, rather than colourful and explosive.

Viewing angles are reasonable, and the Optimus’ panel was uniform: its brightness level never deviated by more than 10%, which is decent for an affordable laptop. Its contrast ratio of 996:1 is better than both rivals, too.

The solid contrast and uniformity results mean I prefer this panel to the 1080p screens in the Acer and Dell machines, but don’t get caught up in that endorsement – this is still a very mediocre panel.

Surprisingly, the speakers are worse. They’re quiet, and the pair of 2W speakers pump out tinny, underwhelming sound – the high-end is lifeless, and treble lacks definition and sounds distant. There’s no subwoofer, so bass is almost entirely absent, and the lack of software on this machine means there’s no opportunity to tweak the audio.

Used as our main laptop for the review period
Tested for at least a week
Used consistent benchmarks for fair comparisons with other laptops
Reviewed using respected industry benchmarks and real world use
Previous
PC Specialist Optimus VIII Review Next
Keyboard, Trackpad, Battery and Verdict Review