The Optimus’ keyboard is a basic affair. It has a number pad and good-sized keys, but no noticeable extras – the backlight is plain white, and the WASD keys aren’t highlighted.

The keys don’t offer much travel, and they don’t feel as solid or as consistent as the buttons on the Acer Aspire VX 15 and Dell systems – those laptops had gripper surfaces and smarter keys with a slightly concave shape.

The PC Specialist’s keys feel too light and flimsy, which makes them less suitable for blasting through frenetic bouts of gameplay. They’re not terrible, but they’re certainly better for typing than for games – and its rivals are certainly better overall. 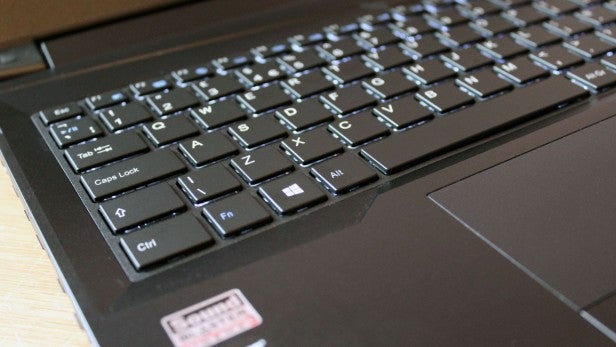 The trackpad suffers similarly. It isn’t bad, but the buttons are too soft and have just a tad too much travel. The surface is smooth and accurate and has decent gesture support, but proper games will need a USB mouse.

The PC Specialist lasted for 6hrs 18mins in our low-intensity Powermark test, which runs a mix of video and web browsing tasks. This isn’t bad for a gaming laptop, but it’s still a tad behind the Acer – and miles behind the 11-hour longevity of the Dell Inspiron 15 7000 Gaming.

Not surprisingly, the PC Specialist returned a poorer score in a tougher test. With a game running and the screen at full brightness it didn’t even make it past 50 minutes.

Should I Buy the PC Specialist Optimus VIII?

The GTX 1050 Ti delivers solid speed in games tests, but it’s too rough around the edges. The single-channel memory undermines application performance, and the battery can’t match the competition.

The screen is poor – albeit very slightly better than rival panels – and neither the keyboard nor trackpad impress. It isn’t an eye-catching machine, either, as a result of its generic exterior. 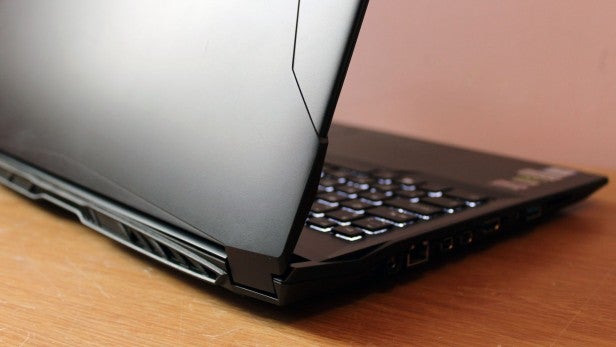 The improved warranty and customisation options are decent, but the general lack of polish means the Dell and Acer are just a little better – unless you’re willing to forego this machine’s issues for its better gaming speed.

The GTX 1050 Ti enables this machine to be a little quicker than its rivals in gaming tests, but its lack of polish elsewhere proves its downfall. It’s fine if gaming pace is important, but other laptops offer more panache.