Introduction
With brands like Sony and, more recently, Philips bringing LCD technology on leaps and bounds this year, the pressure is well and truly on for Panasonic if it wants to keep its beloved plasma technology looking current.

It is just as well, then, that the brand’s latest NeoPlasma panel designs really have taken its plasma quality to new heights, as evidenced by the likes of the Panasonic TX-P65ST50B and Panasonic TX-P42GT50 models we’ve already tested. So it’s fair to say that we’re feeling more than a little enthused by the arrival in our test room of the Panasonic TX-P42ST50. Especially as this £799 42-inch model marks the very cheapest point at which you can get your sweaty mitts on this all-conquering new NeoPlasma incarnation.

Panasonic TX-P42ST50 Design
Aside from its eye-catching price, the Panasonic TX-P42ST50 doesn’t necessarily make the best first impression. Its bezel is quite wide by today’s TV standards, and while we like the glossy grey finish of the main bezel, we’re not sure that the application of an outer transparent trim doesn’t look a bit forced and over-fussy, especially on a screen as relatively small as this 42-inch one. 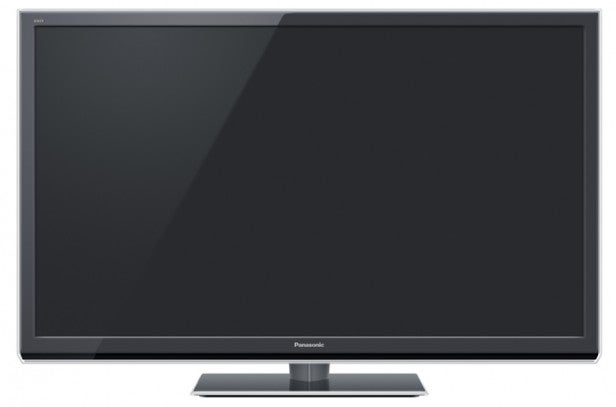 Personally, though, we’re not necessarily too bothered by a TV’s looks provided it turns in a strong performance, so let’s move swiftly on.

We’ve covered the latest Viera Connect system at length in previous Panasonic reviews, so here we’ll restrict ourselves to saying this: that it’s a pleasantly presented, impressively stable system that’s gradually improving all the time but could still do with more video streaming content to join the current Netflix, BBC iPlayer, AceTrax, Twitter, and Eurosport highlights. If you want more detail on Viera Connect, then we refer you to our review of the Panasonic TX-L42ET5.

Another stand-out feature on the Panasonic TX-P42ST50’s feature list is its 3D playback. This is, as with all plasma TVs, of the active type, though unfortunately Panasonic doesn’t supply any 3D glasses for free. So if 3D interests you, you’ll have to factor in the cost of as many 3D glasses as you need.

Panasonic P42ST50 Picture Quality
The Panasonic TX-P42ST50 isn’t as packed with picture fine-tuning tools as its more expensive Panasonic TX-P42GT50 and Panasonic VT50 plasma siblings. This might alarm the sort of really serious AV enthusiasts who tend to be the biggest fans of Panasonic’s plasma TVs, but we’d argue that the innate quality of the Panasonic TX-P42ST50’s pictures is such that to dismiss it just because it doesn’t have, say, a fulsome colour management system would be a mistake.

Getting stuck into the Panasonic TX-P42ST50’s pictures fresh from the impressive efforts of the Philips 46PFL8007, it’s a testament to Panasonic’s latest plasma technology that the P42ST50 still holds its own in many key ways. Its black levels, for starters, are capable of reaching some seriously extreme depths. What’s more, since plasma technology allows each pixel to have its own illumination level, you can still see loads of shadow detail information despite the profound black levels. The Philips LCD set, by comparison, tends to crush some shadow detail out of its darkest picture areas. 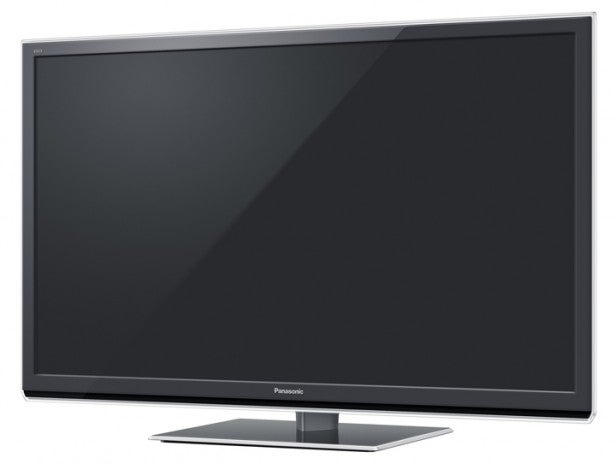 Also pretty brilliant on the Panasonic TX-P42ST50 is how sharp its HD pictures look. Detail levels are extremely high, the set’s plasma core together with the new sub-field driving system means there’s scarcely any sense of resolution being lost over moving objects, and for most of the time there are no significant noise issues to take the edge off things.

The Panasonic TX-P42ST50’s colour handling contributes to the sense of detail in the image too. For while colours aren’t rendered with quite so much finesse as they are on Panasonic’s GT50 and VT50 models, there’s certainly enough breadth to its palette and subtlety in its rendition of colour blends to avoid any ‘off-key’ tones and the sort of banding that can impact lesser plasma screens.

While comfortably at its best with HD, the P42ST50 is still a very respectable standard definition performer. Its upscaling engine does a good job of remapping standard def sources to the screen’s full HD resolution, avoiding the soft and/or noisy finish you often get. 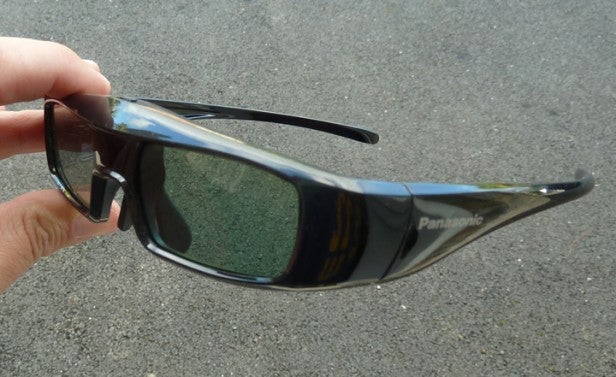 We’re thoroughly accustomed now to Panasonic’s plasma TVs being among the best around when it comes to playing back 3D. And the Panasonic TX-P42ST50 mostly continues this trend. There’s bags of detail on show with HD 3D Blu-rays, for instance, and an excellently judged sense of depth aided and abetted by the TV’s impressive contrast capabilities.

Pictures look decently bright and colourful too compared with Panasonic’s previous plasma generations – though not quite enough to stop very dark scenes looking a touch short of detail.

Panasonic TX-P42ST50 3D
The Panasonic TX-P42ST50 does however suffer a touch of crosstalk. It doesn’t appear as often or as aggressively as it still does on many active 3D TVs, including the recently tested Philips 46PFL8007. But it’s certainly gently visible over the occasional background object, especially if that object is bright against a dark backdrop.

Another smaller issue is the appearance of some low-level colour banding as the Panasonic TX-P42ST50 struggles to resolve colour blends as smoothly in 3D mode as it does in 2D mode. Overall, though, the P42ST50’s 3D pictures remain great fun to watch. 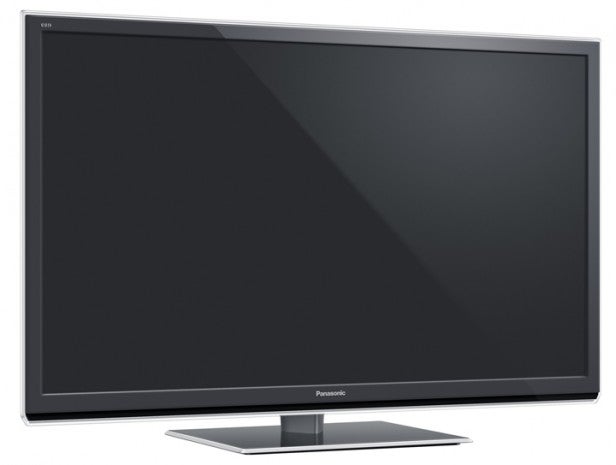 We should stress before we’re done, though, that the Panasonic TX-P42ST50 could be a problematic choice if your room is unusually bright, or if it’s not practical to dim the lights whenever you want to engage in a serious viewing session. The reason we say this is that its screen filters aren’t as effective as those in the more expensive GT50 and VT50 models, allowing ambient light to ‘pollute’ its pictures so that they lose brightness and some colour accuracy (thanks to the infusion of a greenish undertone) if watched in light environments.

Another issue we’d ideally like Panasonic to sort out for its next plasma generation is the appearance of dotty noise and slight lag over horizontally moving objects – especially skin tones. This is especially noticeable while watching standard definition.

If you’re planning on doubling the Panasonic TX-P42ST50 up as a gaming monitor, you’ll be pleased to hear that it isn’t especially prone to plasma’s image retention problems, and turned in an input lag figure of just 34ms – low enough not to damage your skills.

Panasonic TX-P42ST50 Sound Quality
The Panasonic P42ST50’s audio performance is solid to middling meanwhile, with a reasonably robust mid-range and a more rounded bass sound than you tend to get with most of today’s flat TVs. However, it’s a little short of treble detailing, and can sound a bit thick and muddy where vocals are concerned. 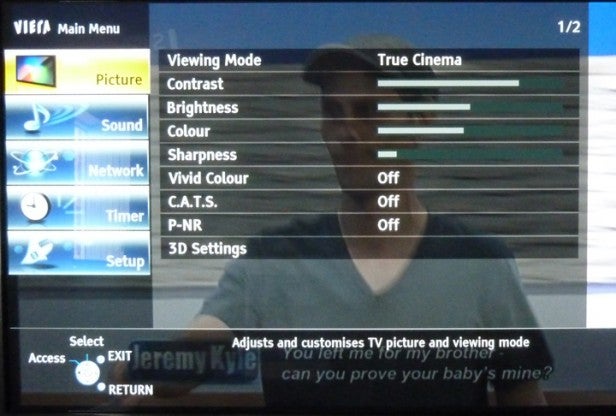 Panasonic TX-P42ST50 Verdict
If you’re a serious movie fan, the Panasonic TX-P42ST50 is a quite brilliant TV for its money. Dim the lights and you’ll get HD pictures to die for, with stunning contrast, rich and natural colours, bags of detail and superb motion clarity.

The way the set loses contrast and colour accuracy in a bright room might put more casual users off, and the surprising appearance of crosstalk with 3D sources will be an issue for the handful of 3D fans out there. But to the right person, the Panasonic TX-P42ST50 is simply the most cinematic 42-inch TV £800 can currently buy.