So far, Panasonic has had a seriously impressive 2012 with its plasma TVs. The ST50 and VT50 models we’ve seen have all proven spectacular successes in both picture and – in the ST50’s case – value terms. There’s been a conspicuous absentee from our Panasonic plasma evaluations so far, though: The new GT50 range that sits comfortably between the ST50 and VT50s.

Panasonic’s GT30 models were arguably the most crowd-pleasing models of Panasonic’s 2011 range – and sold well as a result. So it’s surprising to find that Panasonic isn’t really pushing the GT50s particularly hard. In fact they’re only getting a relatively small-scale release through predominantly independent channels, and are only available in two relatively conservative sizes: The 50in P50GT50 and the 42in Panasonic TX-P42GT50 we’re looking at here. 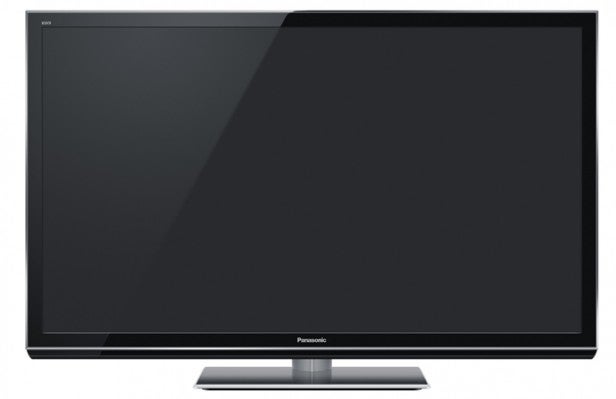 Presumably Panasonic wanted to focus more attention on, and thus bag more sales for, its VT50 series for 2012. But whatever the story behind the GT50’s ‘limited release’, the simple fact is that the GT50s are available to buy now and, as we’ll discover, they’re still a hugely tempting proposition. Especially this 42in model, since the VT50 series only kicks in at the 50in size.

Design
Design-wise the P42GT50 is nice, without setting the world on fire. It doesn’t sport the same ‘one layer’ finish as the flagship VT50 models, and its bezel is quite wide by modern TV standards. But its glossy black finish contrasts nicely with an outer metallic trim, and the whole set feels extremely robust.

As we would expect of a relatively high-end TV, the P42GT50 keeps its connections ranged around the edges for side access to support wall hanging. The only exception, weirdly, is the main ‘kettle lead’ power connection, which sticks straight out. Panasonic’s provided lead does turn at right angles fairly quickly, but it still sticks out far enough to cause wall-hangers a potential headache.

Connections
The connections themselves are plentiful, with highlights of four HDMIs, a D-Sub PC port, three USBs and both LAN and Wi-Fi options for accessing content on networked PCs or Panasonic’s Viera Connect online platform. You also get an SD card slot as a further multimedia playback option, and an LNB input alongside the typical antenna input supports a Freesat tuner alongside the usual Freeview one. Naturally both these tuners are HD. 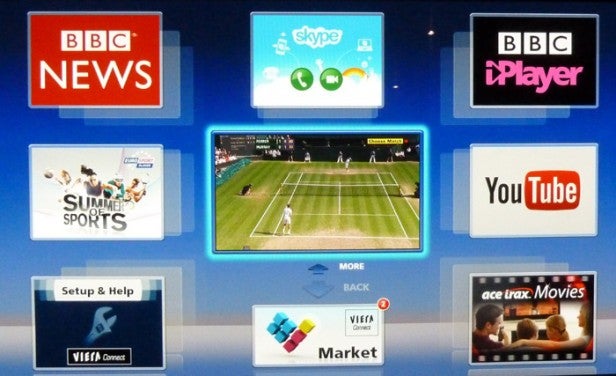 For those of you who haven’t read any of our other 2012 Panasonic TV reviews, the current Viera Connect online platform is starting to shape up quite nicely. Content includes Netflix, BBC iPlayer, Eurosport, YouTube, Facebook, Twitter, Acetrax, BBC News, Fetch TV and iConcerts. Plus MySpace and Disney Books are coming online in the next few months. It would be nice to see LoveFilm and more catchup TV services at some point, but there’s enough going on to keep you busy.

In interface terms, Panasonic’s main app onscreen menu is rather cumbersome in that it doesn’t show as many apps on a single screen as we would like, leaving you having to trawl through ‘sublayers’ to find specific apps you’re after. On the upside, the separate menu for Panasonic’s impressively stable online marketplace is excellent – and is ahead of rival platforms in that it supports microtransactions and other hardware (joysticks, 3D glasses, keyboards etc).

Also notable on Panasonic’s online platform is the quality of some of its online games, with Asphalt 5 and Let’s Golf 2 delivering experiences not too far short of console quality.

The Panasonic TX-P42GT50 is endorsed by both the THX and Imaging Science Foundation groups, leading to dedicated presets (including a well-considered THX Bright setting for use in normal living room light conditions) and a wide range of calibration tools including full gamma and colour management.

VT50 comparisons
At this point we should probably look for ways in which the P42GT50 falls short in specification terms of Panasonic’s flagship VT50 models. The most significant difference is the P42GT50’s use of an Infinite Black Pro panel versus the Infinite Black Ultra panel found in the VT50s. This results in a slightly lower claimed contrast ratio figure of 5,500,000:1 versus the VT50’s 6,000,000:1. 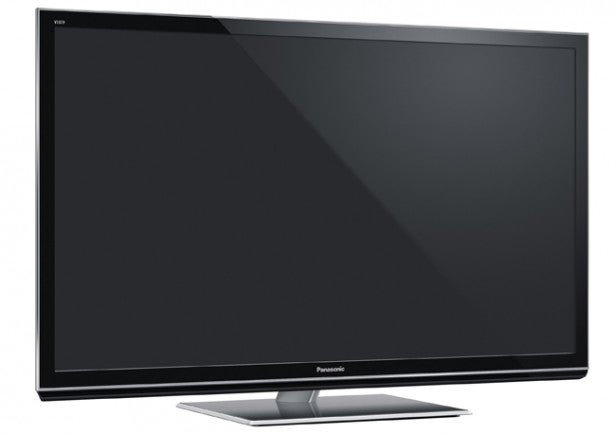 Please note that these figures are all native, meaning they’re measured without the need for a dynamic lighting system like that employed by almost all LCD TVs.

Key specs
Other key specs of the P42GT50 include a full HD resolution (still no other brand has squeezed 1,920 x 1,080 pixels into a 42in plasma screen) and the same ‘2500Hz’ focused Sub-Field Drive technology sported by the VT50 models. This should result in greater stability, less noise and less judder than you commonly get with plasma technology.

In action the P42GT50 proves a chip off the old Panasonic plasma block for 2012, producing mesmerisingly brilliant pictures for watching films in ‘serious’ dark-room conditions, but also producing more brightness to support light room use than previous recent Panasonic plasmas have managed.

It also offers something slightly different to the cheaper ST50 and more expensive VT50 series in picture terms, proving slightly more contrast rich and clean than the ST50’s pictures, and slightly brighter but less contrasty than the VT50’s pictures. As such we could readily imagine the P42GT50 becoming the preferred ‘all-rounder’ option for many people – regardless of how ‘quietly’ Panasonic might have introduced the series.

The 42in Panasonic TX-P42GT50 is, of course, given added appeal if you can’t run to anything bigger by virtue of the fact that there isn’t actually a 42in VT50 model you could consider stepping up to.
Having discussed the P42GT50’s picture in comparative terms, let’s also consider its many strengths and couple of weakness more specifically.

As usual, the star of the show is the Panasonic TX-P42GT50’s outrageously good black level response. During dark scenes it portrays even the blackest parts of the picture with absolute authority, and not a trace of the greyness you get especially with LCD, but also rival plasma, screens.

What’s more, since the P42GT50’s stunning black level depth can be achieved natively, dark scenes enjoy outstanding stability, with none of the shifting brightness levels created by dynamic contrast systems.

And there’s still more. For the self-emissive nature of plasma technology also means that the P42GT50 can reproduce dark scenes with more shadow detailing than you can get out of any rival screen technology. 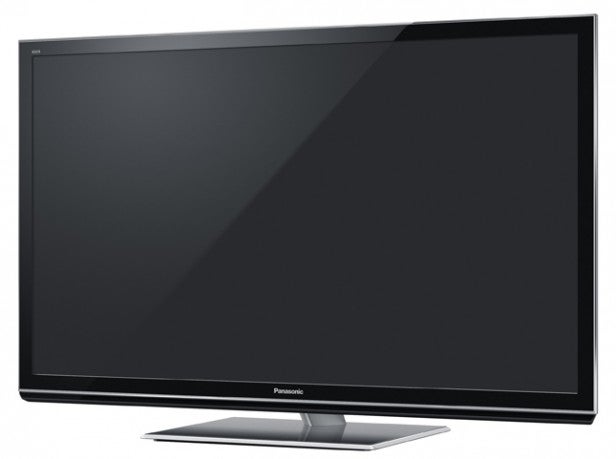 The P42GT50 also delivers on plasma’s advantage of suffering with practically no resolution loss when showing moving objects, and can be watched from a much wider viewing angle than any LCD TV without losing colour or contrast.

Its ‘2500Hz’ system means, moreover, that it suffers less with judder than previous Panasonic plasma generations have tended to, especially when watching 3D.

3D
The Panasonic TX-P42GT50 is very impressive with 3D material in fact, reproducing HD feeds with great detail, along with a well-judged sense of depth, and minimal crosstalk. Some LCD TVs have started to tackle crosstalk well too this year, but the P42GT50’s suppression of the ghosting problem is still great to see.

Other great things about the P42GT50 include the sharpness it displays with HD footage, and a gorgeously natural yet still rich colour palette that’s besmirched precious little by the sort of colour banding plasma TV sometimes generates when trying to resolve subtle colour blends.

Finally in the plus column, our input lag tests came up with an average figure of around 40ms which, while not the very best around, shouldn’t be high enough to be regularly usable as an excuse for your lack of gaming skills.

Problems problems
For all the P42GT50’s strengths, though, especially when it comes to delivering a serious movie performance, it is inevitably not perfect. For instance, despite Panasonic greatly improving the brightness performance of its ‘G15’ 2012 plasma panels, pictures still don’t look as dynamic in ambient light as they tend to with good LCD screens. This issue is particularly noticeable with 3D – though to be fair, the P42GT50’s 3D images are much brighter than those of Panasonic’s 2011 plasmas. 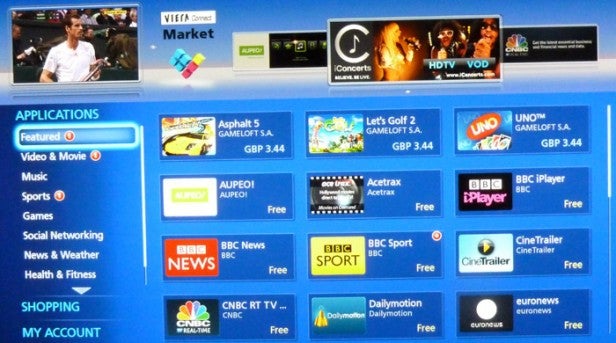 Another issue is that with the picture running quite brightly to combat ambient light, you can see signs of dot noise and momentary colour lag over skin tones as they move across the screen. You can greatly reduce this by calling into play the upper echelons of Panasonic’s Intelligent Frame Creation processing, but doing this tends to leave pictures looking rather unnatural.

One further issue is that if you use the Dynamic mode during 3D viewing, the picture’s brightness level seems to jump around really quite distractingly during dark scenes. But so long as you can live with one of the other (admittedly slightly less punchy) picture presets, this problem largely disappears.

Sonically the P42GT50 is a solid enough effort. It’s not quite as powerful and open sounding as we might have hoped given its excellent build quality, but it’s slightly richer in its sound and less prone to distortion than many rival flat TVs.

Verdict
Good LCD TVs can produce punchier images in bright rooms than the Panasonic TX-P42GT50. But if you’re into films and you’re in the market for a high quality 42in TV, you really can’t do any better than the P42GT50 right now. Its contrast performance, in particular, is simply in a league of its own.