Brilliant and massively popular though the BBC iPlayer is, up to now it’s really been a PC-centric feature. As a result, the shift over the past two years to smart TVs hasn’t been particularly kind to the original iPlayer interface, making it clear that operating system principles that might work on a PC don’t tend to work on a TV driven by a simple remote control.

So it is that finally this week, after a typically protracted Beta testing process (the Beeb’s public service remit means it has to make absolutely sure something works properly before launching it – a sadly dying attitude in the AV world!), the new BBC iPlayer is here. And it’s been designed from the ground up to work on big-screen tellies rather than mouse- and keyboard-driven PCs. So we thought we ought to have a look at it.

Doing so requires us to fire up our PS3. For at the time of writing, the new service has only  been approved for use on Sony’s console; presumably the usual banks of compatibility tests still haven’t been completed on all the different ‘smart TV’ platforms. The version of the new iPlayer that ultimately arrives on smart TVs, though, will closely resemble if not be identical to the one now sported by your PS3 (assuming you’ve applied the latest firmware update).

According to the BBC, the new iPlayer’s improvements are focussed around three key areas. First, the new service is supposed to be ‘just like TV’. In other words, its HTML5-driven interface has been redesigned to be highly visual and as straightforward as channel surfing. 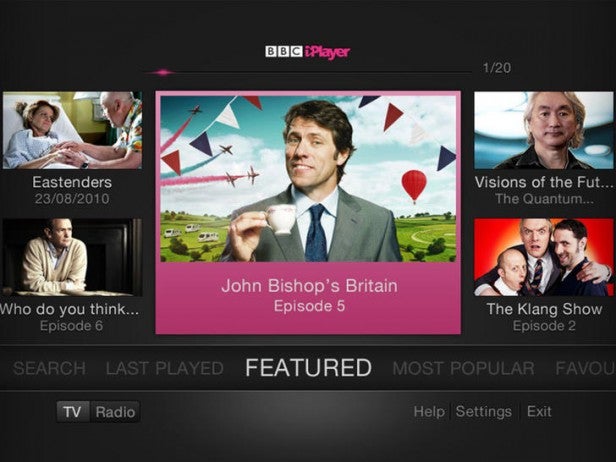 Next, the new service supposedly makes it much easier to find the content you want, thanks especially to an improved search tool; favourite lists giving you quick access to your favourite shows; and a recommendations system.

Finally, the Beeb has tried to make the new iPlayer experience feel more personalised, with the new favourite programmes feature again to the fore in this respect.

As you would hope, signs of the iPlayer revamp become apparent as soon as you fire it up, in the shape of a new home menu dominated by a scrollable window showing five featured programmes, with a list of other search-aiding categories running along the bottom of the screen. Having five programmes at once visible and accessible on screen is a great improvement over the rather clumsy previous ‘home’ screen, which only showed one title at a time in full.

Choosing to play a programme on the Featured list is effortlessly achieved via your PS3 joystick or PS3 TV-style remote, using just the typical navigation and ‘Select/OK’ buttons. And once you’ve selected something to watch, you get a ‘header’ screen featuring more information on the show including its air date, running time and remaining iPlayer availability schedule. Plus, of course, there’s the playback icon, and options to switch between HD and standard def playback, and add a show as a favourite. Again, selecting between these latter options is a doddle, and it’s very clear which option you’ve got selected at any time.

The iPlayer menus respond well to PS3 joystick or remote commands, too. The sluggishness we frequently suffered when using the old iPlayer on various devices seems to have been ironed out, at least for this PS3 incarnation. It’s great to find, too, that if you hit pause during playback, you get the option to change the picture definition and the programme’s favourite status without having to quit back to the service’s header menus.

Looking next into all the other category ‘headers’ below the main programme selection window, first up is a Most Popular option which, as you would expect, gathers together the most watched shows from the iPlayer’s servers. At the time of writing the number one show was, of course, EastEnders…

Next along the list of header options is arguably the new iPlayer’s biggest feature: the new Favourites window, which populates with any shows you’ve chosen as favourites when new episodes become available. It doesn’t take long using this feature to realise that it effectively functions as series link on iPlayer – which is, of course, a Very Good Thing.

In fact, the favourites feature changes the iPlayer from being a mere tool for catching up with occasional programmes we’d missed to a device that could actually become a core component of your regular evening TV viewing. 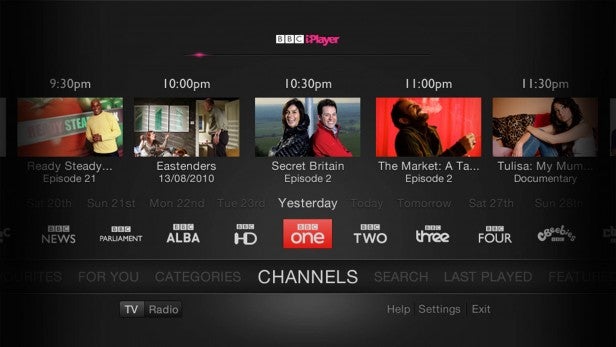 This potential is further enhanced by the way that once you get to the end of a show, the new iPlayer recommends and provides direct links to similar programmes to the one you’ve just watched. Obviously the iPlayer is not nearly as sophisticated in respect of its recommendations as Virgin’s TiVo box, but there were numerous occasions while we were testing the system where we really did elect to move straight into watching a programme that the iPlayer’s genre recognition service had recommended.

The genre recognition system also gives rise to a fairly effective genre-based ‘Categories’ section, where available programmes are divided into Children’s, Comedy, Drama, Entertainment, Sign Zone, News, Factual, Films, Learning, Lifestyle & Leisure, Music, Sport, Religion plus Northern Ireland/Scotland/Wales sections. The usefulness of this section in streamlining browsing speaks for itself, with the Children’s section likely to be a life-saver for many parents who don’t have Sky boxes to entertain their kids with.

The next navigation header breaks the available programming down into channels, and its menu structure does a brilliantly efficient and elegant job of allowing you to easily navigate between BBC One, BBC Two, BBC Three, BBC Four, BBC HD, Cbeebies and CBBC content, as well as picking the broadcast date for each channel in question. We used this new menu regularly to quickly track down programmes we’d missed. 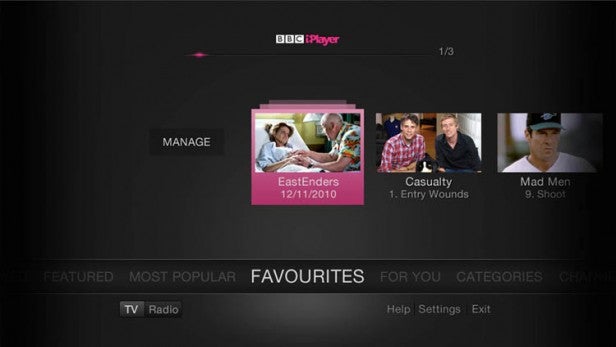 Aside from a self-explanatory ‘last played’ header that lets you go quickly back to something you maybe only got half way through at an earlier sitting, the last tool in the new iPlayer’s locker is the text search feature. This lets you type in letters and numbers via a virtual keypad on the screen, and immediately starts to generate responses from the moment you add the first letter.

For example, type an H, and visual headers for all programmes beginning with H appear, stacked on top of each other. Add another letter, and the list of options reduces accordingly. The previous iPlayer did this too, of course, but introducing graphical headers for the search results instead of the text-only results on the previous system makes the new search engine feel more friendly and intuitive.

One final welcome touch with the new iPlayer’s operating system is that there seemed to be much more content available from well beyond the usual week previous than there was before. Some shows have whole series on there, including episodes dating back months.

Catch-up series are there on the previous iPlayer system too, of course. But it feels as if there are more of them on the new iPlayer, and the way series are now presented in a ‘tiled folder’ format rather than just as a text list like they were before makes it much easier to find and navigate through each episode.

The last thing we need to check out on the new iPlayer is its performance. Obviously it’s hard to offer an opinion here that will reflect every user’s experience, due to the massive differences in broadband speeds across the UK. Indeed, we’ve seen a lot of evidence in online ‘chatter’ to suggest that many people are struggling with the new iPlayer. Our personal experience, though, has been a mostly very positive one.

Standard definition streaming has been almost perfect throughout our tests in terms of not suffering with stutters or pauses, at least after the first few seconds of a stream starting. The picture quality of standard definition streams is a touch disappointing, though, suffering with some obvious MPEG blocking artefacts that can soften the picture, cause flickering over bright or detailed areas, and make skin tones look patchy. It’s certainly not unwatchable, particularly if your TV isn’t particularly big. But the slight mess on the standard def pictures will likely tempt most people with an HD TV to try their broadband connection out with HD streams.

We didn’t hold out much hope for such streams via our normal, rather rural 6000kbps (measured) BT service. But actually, it didn’t do badly at all. 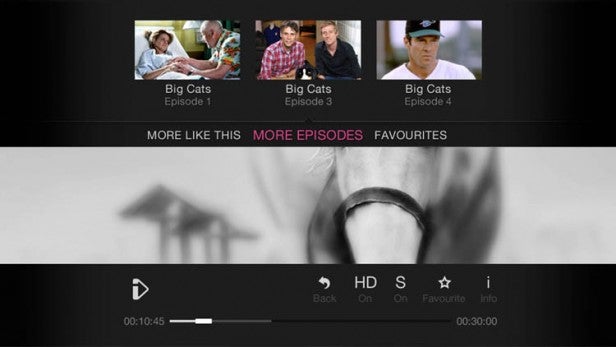 On the downside, there was a lengthy pause – 15-20 seconds, usually – between pressing play and the HD streams actually starting, and the opening few seconds of what you’re watching fairly commonly stuttered. Once an HD stream had properly kicked into gear though, although there was a small amount of general judder, actual pauses and distracting stutters happened surprisingly rarely.

Or at least that was the case if we didn’t use fast forward or rewind. Shuttling forwards or backwards through HD streams caused them to break down so badly in terms of huge pauses and stuttering that we either had to quit the stream and re-enter it, or leave it on pause for as much as a minute before the stream settled down again.

It also has to be said that the fast forwarding or rewinding process with HD (and it’s hardly perfect with standard def either) is so imprecise that it’s almost pointless.

Getting back to the good news, the quality of the HD pictures is very good. The MPEG noise seen with standard definition feeds is massively reduced, while detail levels and the image’s general sharpness both increase dramatically. We’re not talking Blu-ray levels of perfection by any means, but the quality increase is sufficiently high that we suspect even people whose broadband connections can only handle HD streams with a minor pause or two will prefer that sporadic irritation to the general MPEG noise levels visible with standard def material.

During our tests the sound quality seemed better on HD feeds too; sometimes the audio accompanying standard definition streams sounded warbly and digitised.

The amount of trouble some people seem to be having with the new iPlayer makes us wonder if it’s as clever at adapting to different broadband rates as the previous iPlayer seemed to be.

However, if like us you’re lucky enough to enjoy a seemingly stable broadband feed, It’s hard not to be impressed by what the new iPlayer achieves. Its interface is far more intuitive, speedy and browsing-friendly for TV users than the previous one, and the new search, recommendation and especially favourites systems potentially turn the iPlayer from a mere convenience tool into a central part of some households’ daily TV routine. All for free. Um, except for what you already spend on your license fee, obviously…