Introduction
It’s perhaps a bit ironic that arguably our favourite 2012 Panasonic LCD TV to date isn’t in fact all Panasonic’s own work. For the 42-inch Panasonic Viera TX-L42ET5 – Panasonic’s first foray into the passive 3D world – is actually built around a panel sourced from the inventor of current passive 3D TV technology, LG.

Of course, though, with more and more brands finding it ever harder to manufacture their own panels, it’s far from uncommon for TVs to have panels at their heart that might not come from the brands badged on their front. And in any case, so long as a TV turns out to be good, does it really matter where one element of it comes from?

Panasonic TX-L55ET5 Design
Hopefully the Panasonic TX-L55ET5B we’re looking at here will prove the truth of this thought process. As its name suggests it’s a 55-inch version of the Panasonic Viera TX-L42ET5, with its extra size having the potential to take the qualities enjoyed on its smaller sibling to another level. Or, we guess, expose weaknesses in the ET5’s make up that we hadn’t previously clocked. 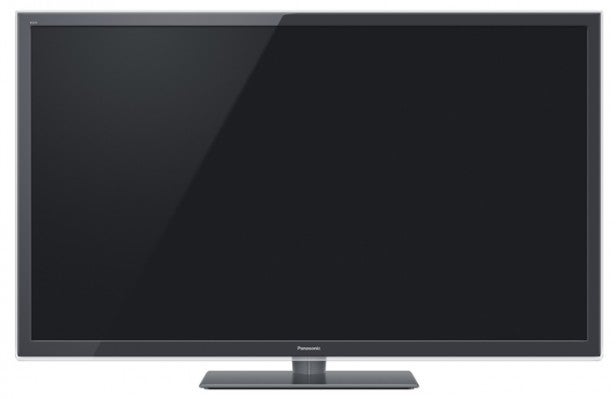 The Panasonic TX-L55ET5 is a hefty chunk of TV. At more than an inch deep, its bezel has no desire to follow the fad of making picture frames as narrow as possible, while its rear is hardly the thinnest either. The biggest shock, though, comes when you lift the TV for wall hanging or slotting onto its provided desktop stand. Weighing in on the extremely heavy side of LCD TV standards, the 55-inch model gives Panasonic’s legendary heavy plasmas a run for their money.

The deep grey colour scheme for the bezel and the few millimetres of transparent outer trim that wraps around all four of the TV’s sides ensure that the TX-L55ET5 wears its bulk reasonably well – though we didn’t find the design quite as likable at the 55-inch size as we did on the 42-inch model.

Panasonic TX-L55ET5 Connectivity
Connectivity is strong. Four HDMIs is on a par with most premium TVs these days, while its three USBs, SD card slot and integrated Wi-Fi provide more than enough means of handling a modern family’s multimedia needs. Panasonic isn’t totally comprehensive in its multimedia file type support as some rivals, but it’s flexible enough for just about everyone to find something they can work with.

Panasonic TX-L55ET5 Online Features
The Wi-Fi (or LAN if you’d rather hardwire the TX-L55ET5 into your network) can also be used to take Panasonic’s TV online, with the brand’s Panasonic Viera Connect service. This is evolving quite nicely now. Certainly it’s one of the most stable and fluid online TV platforms around at present, and its marketplace interface is as good an example of an on-TV shopping experience as we’ve seen. 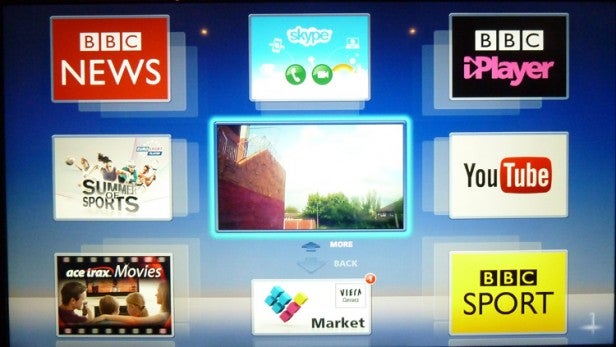 So far as non video streaming apps are concerned, the highlights are an open Web browser, Twitter and Facebook apps, and a selection of games available via the marketplace. Two of these – Asphalt 5 and Let’s Golf 2 – are streets ahead of the simple games available on rival Smart TV platforms in terms of their sophistication and quality.

When it comes to picture tweaks, the Panasonic TX-L55ET5 is adequately, rather than extravagantly, equipped. It lets you adjust the gain and ‘cutoff’ of the red, green and blue colour elements, and provides a handful of different settings for the TV’s gamma – including the all-important 2.2 level generally best suited to video viewing.

You can also choose from three different settings for the TV’s Intelligent Frame Creation processing, which interpolates extra frames of picture in a bid to make motion cleaner and smoother. Personally we’d only recommend using this on its lowest power setting or turning it off altogether, as it can cause a few image artefacts. Though it’s at least good enough to warrant at bit of experimentation with different source types.

Also to be treated with care is the set’s noise reduction system, which defaults to Auto but is frankly better left off when watching HD sources. 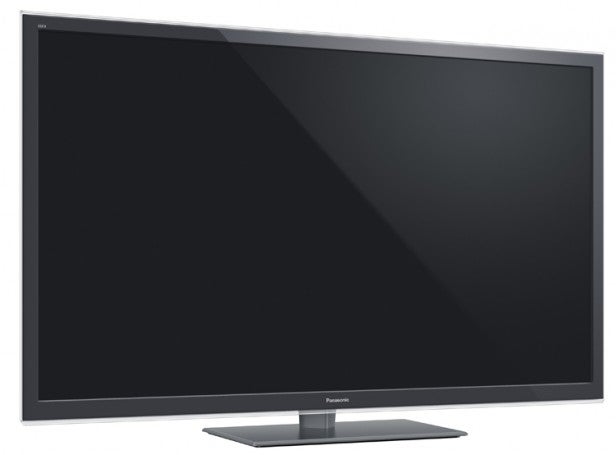 The unsophisticated bits come in the form of the unit’s pretty basic approach to upscaling standard definition, the slightly ‘coarse’ look given to its 3D images, and a rather low-on-nuance approach to colours.

Looking at these in turn, standard definition pictures tend to look a bit soft, and not as free of source digital compression noise as we often see with Panasonic TVs. The set does, of course, have a noise reduction system, but while using this does reduce the obviousness of the compression blocking, it also makes the picture look even softer.

Panasonic TX-L55ET5 3D Pictures
With 3D, as noted before with very large passive 3D TVs, you can quite clearly make out signs of the 3D filter that lies across the screen in the picture. This is most evident as a jagged look to curved edges, but you can also sometimes see horizontal line structure over bright parts of the picture – especially if those bright parts are quite small. There are plenty of advantages to the passive approach too, mind you, which we’ll get into presently.

Finally, with colours there’s a tendency for expanses of colour – and skin tones – to look a bit flat and one-dimensional thanks to the TV not delineating quite as many blend subtleties as the best TVs in town.

From here on in, though, the news is mostly good. Going back to 3D, for instance, while resolution hounds may rue the slightly coarse edges and a marginal loss of resolution versus the full HD active 3D format, more mainstream users will lap up the passive 3D advantages of a completely flicker-free (and thus less tiring) experience; pretty much no crosstalk ghosting noise provided you keep your vertical viewing angle within 13 degrees above or below the screen; and the fact that you get four pairs of 3D glasses included for free.

This is enough glasses to get an average family immediately ‘3D-ed up’, and contrasts nicely with the fact that the vast majority of Panasonic’s active 3D plasma TVs don’t ship with any free 3D glasses at all. 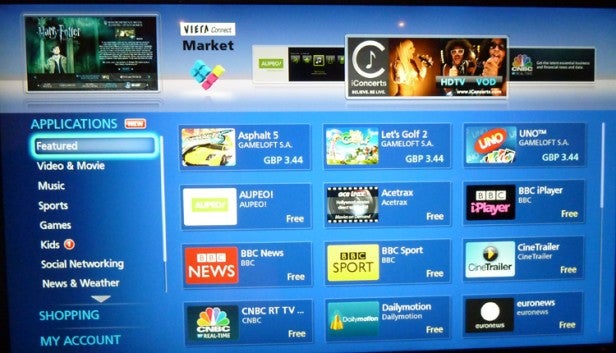 The Panasonic TX-L55ET5’s 3D images are also bright and colourful, and enjoy a very natural sense of depth. All of which means, basically, that they’re really easy to engage with and get lost in, even over a quite protracted viewing session.

Also, while standard definition images may look a bit soft, things really snap into focus as soon as you pipe in some quality HD. Detail levels are strong, with the screen’s 55-inch size doing a great job of convincingly rendering all the detail present in a good quality Blu-ray. The detail is also rendered with only the very faintest and rarest traces of noise, and for the vast majority of the time in 2D mode you aren’t aware of the structure of the 3D filter applied to the screen.

The screen also does a pretty good job of handling motion, even without Panasonic’s IFC motion compensation active. In this respect the TV seems to perform slightly better than LG’s equivalent TVs despite the shared core panel heritage – a function, presumably, of Panasonic using some slightly superior processing technology.

Provided you’re careful with your settings, the Panasonic TX-L55ET5 is capable of a pretty good black level response for a TV that doesn’t have any local dimming technology onboard. But that’s not to say that its rendering of dark scenes is by any means perfect. To explain…

First, if you attempt to watch films using the provided True Cinema mode, you’ll find yourself feeling very distracted during dark scenes by a distinctly washed out look to black colours as well as some pretty serious backlight inconsistencies. These cloudy areas even look to take on slightly different colours, with some adopting a greenish tone and some looking more blue. Not good. 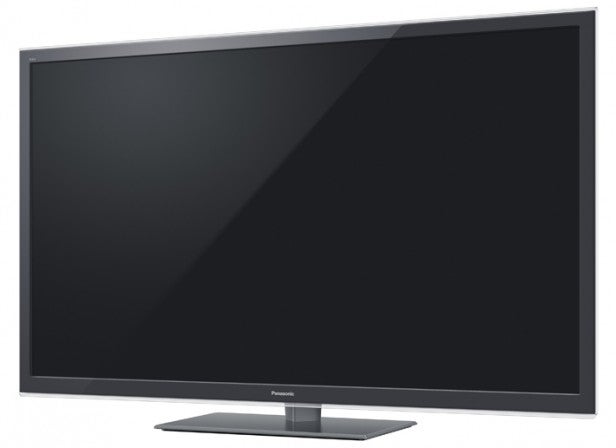 Fortunately, both the Cinema and Normal modes look much better in terms of the depth of black colour they deliver, and their relative freedom from backlight inconsistency. This is down to the fact that unlike the True Cinema mode, the Cinema and Normal modes both use a dynamic contrast system, where the TV automatically adjusts the image’s brightness level to best suit the darkness of the source content.

Panasonic TX-L55ET5 Brightness
There is, though, a catch to this, namely that the dynamic luminance adjustment isn’t quite subtle or fast enough, meaning that you can sometimes clearly see when the TV decides to make one of its light output ‘jumps’.

To be clear, the sort of problems we’re talking about here won’t trouble you during most of your viewing. But they certainly leapt out at us at least a handful of times while watching a selection of films, so we have to mention them. The dark scene issues also made us reflect that Panasonic would have been well advised to provide more flexibility over its pictures, such as a backlight adjustment and the facility to manually tweak the aggressiveness of the dynamic contrast system. 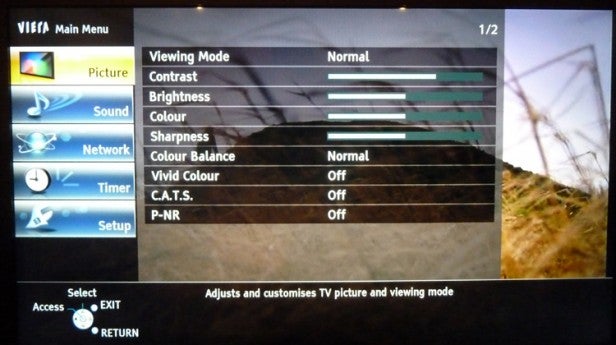 The Panasonic TX-L55ET5’s audio quality is solid. The unusually large and heavy bodywork proves helpful in allowing the set to go loud without sounding distorted or succumbing to cabinet rattles. Dialogue remains clear over action scenes, and there’s a good sense of treble detail in the mix. Bass is a bit constrained, but at least there’s a sense of it actually existing, which is actually a fair result by flat TV standards.

Panasonic TX-L55ET5 Verdict
Despite falling prey to what we’ve come to know as the ‘Sony HX853‘ effect, whereby the quality of Sony’s latest flagship TVs has lead to us being more critical of other TVs’ handling of dark scenes, the Panasonic TX-L55ET5 ultimately impresses. Its pictures are bright, colourful, straightforward and, with the majority of sources, sharp and detailed. Its relaxing passive 3D approach with four sets of free glasses is well suited to a typical family environment too, with its large 55-inch screen also proving helpful in making 3D more engaging.

Its multimedia abilities are fairly if not exhaustively strong too, and finally £1,350 seems a pretty fair price to pay for such a solid and large all-rounder.