Introduction
The longer 2012 has gone on, the more we’ve come to realise just how influential Sony’s HX853 TV series is. Ever since we tested the first HX853 model, the 46-inch Sony KDL-46HX853, it’s become an undeniable fact that this range’s outstanding picture quality has coloured our view of every other TV that’s come our way.

In other words, TVs that would probably have bagged Recommended badges from us before the HX853’s arrival are suddenly only securing scores of 8 or less, simply because they don’t live up to the standards set by Sony’s game changer.

Rose-tinted glasses?
This fact has actually made us feel a bit nervous recently, making us wonder if the passage of time since our May review of the 46HX853 has got us looking back at it through rose-tinted glasses. So we figured it was time to remind ourselves of just how good the HX853s are by looking at the only model in the series we haven’t seen yet: the Sony KDL-40HX853.

Prepping ourselves for this review immediately revealed a slightly odd aberration regarding the 40HX853’s price. For the best deal we managed to find on this 40in TV was £969 – only £100 less than the best price we’ve managed to find for its 46in sibling, when we might have expected a much larger price gap for such a significant size difference. 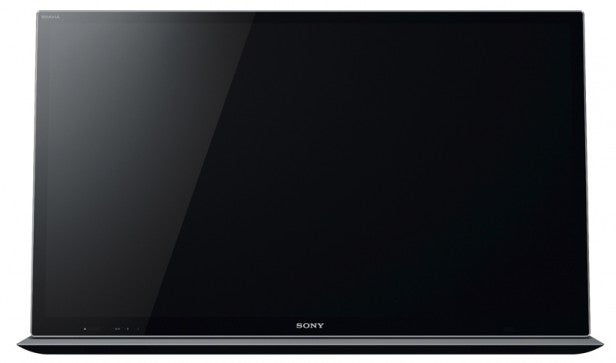 We guess this doesn’t really matter in some ways; if you want a 40in TV and nothing else, then £969 still isn’t a remotely crazy price for what’s hopefully going to prove a brilliant TV. But we’d certainly be tempted to step up to the 46in model if space allows. Plus it means the 40HX853 isn’t quite such brilliant value when compared to its peers as Sony’s biggest screen sizes.

Design
Aesthetically, though, the 40in size suits Sony’s latest Monolithic design. The combination of a sheer glass front, black frame and shiny metallic silver outer trim looks supremely elegant – and that’s even before you’ve slotted the TV into its unusual ‘bar’-style metallic stand. This stand contains extra speakers too, which we recommend that you use for reasons discussed later.

Connectivity
Connectivity on the 40HX853 is pretty strong, as four HDMIs are joined by two USBs, a LAN port, a D-Sub PC port, and built-in Wi-Fi. In an ideal world Sony might have run to a third USB, but otherwise there’s nothing to complain about.

The USBs can play back a solid if not exhaustive selection of video, photo and music file formats, while the network connections can be used to access similar file types on either PC or Mac computers (via Sony’s free-to-download Homestream software). Or you can go online with the new Sony Entertainment Network.

Online Service
SEN represents a quite substantial step forward from the previous Bravia Internet Video service, at least when it comes to the interface you use to access all of its content. No longer do you have to faff about when trying to go online with the confusing cross-bar menu system still (unfortunately) used for adjusting the TV’s settings. Now all the online content can be accessed via a much more attractive, well-organised, graphics-rich menu that separates all the available apps into simple ‘Apps’, ‘Video’ and ‘Music’ categories.

There’s also a Favourite section into which you can slot the apps you use the most, to save you from having to trawl down the icon lists too much. 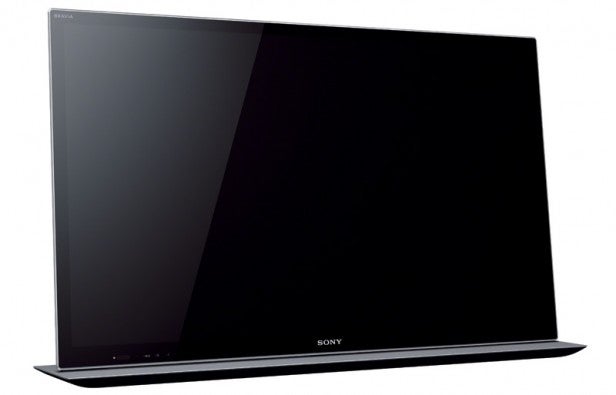 One catch with the SEN interface is that the Music and Video sections are actually both built exclusively around Sony’s own Video and Music Unlimited subscription services, rather than including other service provider options. The likes of the BBC iPlayer, Demand 5, BBC News, Netflix, LoveFilm and Sky News are thus found under the generic Apps menu.

Social media
Also available are Facebook, Twitter, and Skype social networking apps, with your Twitter feed rather excellently appearing below the small version of the TV picture that continues to play while you browse the SEN menus.

There are a few utility and gaming apps too, but as usual these are generally far less interesting than the AV apps.

One moan we have to raise about the SEN menus is that the main one takes an aggravatingly long time to load. Otherwise, though, in both content and presentation terms, Sony’s latest smart TV system is a compelling proposition. 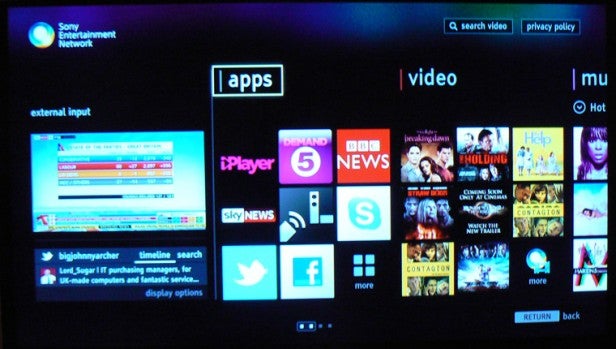 Picture Quality
Across to picture quality and thankfully it takes mere seconds of watching the 40HX853 to realise that it really is every bit as good as we remembered its bigger siblings being.

The single biggest component of its success is its exemplary black level response. Thanks to its use of easily the most sophisticated local dimming system we’ve seen on an edge LED TV, the picture somehow manages to combine inkily deep black colours with startlingly punchy whites and colours to an extent only previously seen on the best plasma and direct (as opposed to edge) LED sets.

There are, to be fair, other edge LED TVs with local dimming that have had a good stab at producing deep black levels without taking too much brightness out of the image. But these have all suffered to some extent with a different problem: light blocking. This finds quite obvious rectangles and squares of light appearing around bright objects when they appear against dark backgrounds. But while you can just occasionally spot such artefacts on the 40HX853, their occurrence is rare, and even when they happen they tend to be very subtle.

Joining the 40HX853’s awesome contrast in helping to put a huge smile on our face is its extreme colour range. Some previous Sony TV generations have tended to look a touch muted in the colours department, but here colours across a huge spectrum practically explode off the screen. There’s nothing vulgar about this, though; colours still contain all the tone and blend subtleties needed to ensure they look ‘real’ (rather than flat and cartoony), and the palette looks impressively natural.
This naturalism is particularly striking during dark scenes, as colours avoid the greyish or bluish overtones common with even very good LCD TVs.

Sharp HD
HD images, meanwhile, are spectacularly sharp and detailed – and this sharpness scarcely deteriorates at all when the image contains a lot of motion thanks to Sony’s outstanding picture processing. You have to be a bit careful which of the many available motion processing settings you use; we found the least powerful options to work best. But even if you don’t use any motion processing at all the 40HX853 still looks extremely clean no matter how much pressure it gets put under by an action movie.

With the 40HX853’s standard definition upscaling also impressing, adding lots of sharpness without emphasising noise, pretty much our only reservation with the 40HX853’s picture quality comes when watching 3D. For despite the TV using a native 200Hz panel, there’s still just a trace of crosstalk ghosting noise over some bright, distant objects. 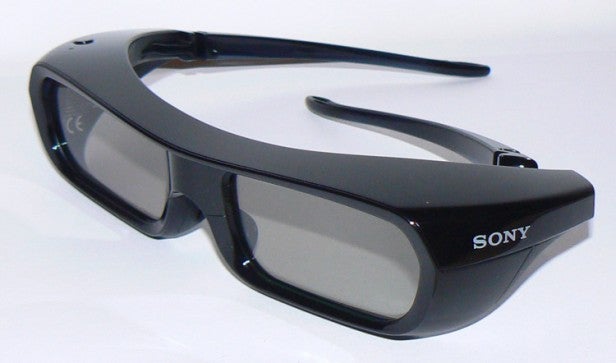 However, the amount and aggressiveness of this crosstalk is hugely reduced compared with the horror show witnessed with some of Sony’s 2011 3D TVs, and is ultimately overwhelmed by plenty of 3D strengths. Namely good levels of brightness and colour saturation even with Sony’s 3D glasses on, excellent depth resolution, and extreme sharpness when showing 3D Blu-rays, especially with Sony’s hugely impressive Reality Creation processing active.

No free 3D glasses
We must stress here that unfortunately Sony doesn’t include any 3D glasses for free with the 40HX853, so you’ll have to factor those into the TV’s cost. But we’d say the results are worth the investment.

Gamers, meanwhile, will be delighted to hear that the 40HX853 measured only around 33ms of input lag during our tests, which should be low enough to leave you competitive at Call of Duty or Battlefield 3.

As if the 40HX853 hadn’t already done enough to blow us away, it’s also in a class above most flat TVs with its sound – so long as you use the speaker-bearing stand, at least, for this produces quantities of bass and raw power that it’s hard to imagine any normal integrated TV speaker system being able to match.

Verdict
It turns out that we needn’t have worried. On the evidence of this 40in model Sony’s HX853 series really is as good as we remember it being. It takes edge LED performance to significant new heights and throws in a content-rich online service for good measure – all for a price keen enough to make many of its rivals blush.