Panasonic’s Smart Viera concept is a perfect example of just how fluid the Smart TV world is. During the majority of 2011, Panasonic’s Smart functionality was very much ‘b-grade’ versus the a-list delights of the services offered by Sony, Samsung and LG. Yet by Christmas 2011, Panasonic’s service had suddenly become arguably the most interesting platform around, at least in terms of its potential.

There were three main reasons for this sudden reversal of fortune. First, Panasonic became the first brand in the UK to open a fully functioning Smart TV marketplace, where you could directly buy accessories and software. Second, the sort of accessories on sale include gamepads/joysticks, weighing scales, 3D glasses and even, soon, a fully functioning treadmill, which really illustrates just how ‘interactive’ Smart TVs are capable of being.

Finally, Panasonic opened up a Developer’s Portal, designed to allow/help third party app developers produce apps for the Smart Viera platform. This well-implemented and straightforward portal really does have the potential to generate a huge increase in the otherwise somewhat limited amount of content available. 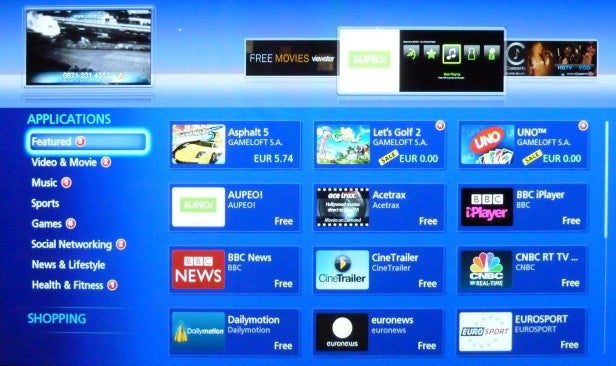 The interface Panasonic introduced for its Viera Connect Market was cool too, doing a good job of using genre divisions and easy to navigate search tools to help you find stuff you want as quickly as possible. Basically, the late-2011 additions to Smart Viera in conjunction with the service’s exceptional reliability compared with some of its rivals suggested that Panasonic’s focus had been on getting its platform running smoothly rather than just piling on content. And actually this is an approach we have a lot of time for.

That said, there’s no doubt that Smart Viera TVs aren’t as replete with content as some of their rivals. There’s now the BBC iPlayer, thankfully, along with AceTrax, Eurosport and YouTube as your key video platforms. Plus there are Facebook, Twitter and Skype apps for social networking, and some recently launched games from Gameloft which deliver levels of graphical ability and online functionality way beyond anything we’ve seen on any of the other Smart TV platforms to date.

However, a few more video services – both subscription and free – would be greatly appreciated. And although we’re not suggesting that Panasonic goes as ‘app mad’ as some of the other Smart TV platforms, it would definitely be nice if the opening of the Developer’s Portal helps Panasonic serve up more smaller but still useful/fun apps than it’s currently got.

It also seems to us that Panasonic will need to revamp its online interface to reflect the growing amount of content it’s going to be carrying. The current system – outside of the Marketplace – just doesn’t fit enough content onscreen at once, leaving you having to delve through too many ‘secondary windows’ to get to some of the stuff you might want.

Right now, overall, we guess the Smart Viera/Viera Connect platform is still a touch less exciting than some of its rivals thanks to its simple lack of content. But in terms of potential for the future, it’s definitely ‘the one to watch’.