What is the Panasonic Lumix Gx80?

The Panasonic Lumix GX80 is the company’s newest compact system camera, and is designed to be a pared-down version of the more advanced GX8; it sits just above the GF6 in Panasonic’s lineup.

It has a 16-million pixel four-thirds sensor and uses the Micro Four Thirds mount, making it compatible with a huge number of lenses from Panasonic as well as Olympus and third-party manufacturers.

As with other current Panasonic releases, 4K is one of its headline features. Not only can you record 4K video, but you can also use 4K photo modes to extract stills from recorded video, or to change the focus point of your image after it’s been taken. 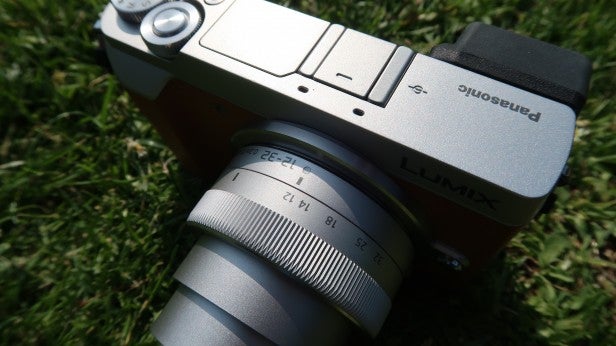 Panasonic’s GX7 was popular. It was replaced with the GX8, which was bigger and far chunkier in size – lots of people lamented the loss of the smaller body of the GX7. Less than a year after the GX8’s launch, Panasonic introduces the GX80, which is considerably more similar to the GX7 and should therefore prove popular.

The GX80 is a slim offering, especially when combined with the default 12-32mm kit lens. The camera has a textured coating, which helps your fingers sit comfortably on its surface on both the front and rear of the camera. The front also has a raised grip to make it feel secure in your hand.

There are fewer buttons and direct access dials on the GX80 than you’ll find on the GX8 – no surprise considering this is a cheaper alternative. On the top sits a mode dial for quickly moving between the different shooting modes that are on offer here. Next to it you’ll find the shutter release button, which is surrounded by a scrolling dial. This controls different settings, depending on the shooting mode you’re working in. For example, if you’re shooting in aperture priority mode, then it will alter aperture. 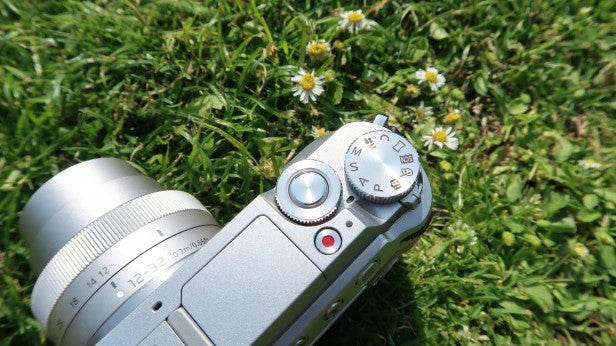 There’s a good number of customisable buttons on the back of the camera, to which you can assign functions that you need access to quickly. By default, the Fn2 button accesses the GX80’s quick menu, which contains direct routes to commonly used settings, such as white balance, ISO and others.

4K photo modes are, by default, accessed via dedicated buttons too. There are three modes on offer: 4K Burst, 4K Burst (Start/Stop) and 4K Pre-Burst. 4K Burst records 4K video at 30fps for as long as you hold down the shutter release. Start/Stop, as it suggests, will start recording when the release is pressed, but stop when you press it again. Pre-Burst records only two seconds of video, but one second is before you press the shutter release (the camera is constantly buffering when in this mode), and one second after you press it. No matter which 4K photo mode you use, you can extract 8-megapixel stills in playback, in camera.

Also making use of 4K video is Post Focus mode. This basically creates a video that shoots a different focus point per frame. You can then choose from any of these focus points in playback. It’s quite a useful function for some subjects, but it’s pretty gimmicky and something you’ll probably use rarely.

One of the benefits of the GX80 over the GF range of Panasonic cameras is the addition of an electronic viewfinder. While the one here is smaller than the viewfinder on the GX8, it still offers a bright and clear view, and there’s an electronic sensor to automatically switch it on (and the screen off) when the camera is lifted to your eye.

While you’re using the viewfinder, it remains possible to use the screen to set AF points via Touch Pad AF. Simply use your finger to touch the point you need; it’s much more intuitive than trying to guess which button you need to press. On the downside, however, you may find that you occasionally accidentally set the AF point with your nose.

The GX80’s screen is tilting, rather than fully. This is useful for many awkward angles, but is less usable when shooting in portrait format. It doesn’t face forward in the way of the GF6’s screen, so fans of selfies may be disappointed. However, as already mentioned, it’s touch-sensitive and particularly useful for setting the AF point and navigating through menus. It’s responsive in use and is implemented well. 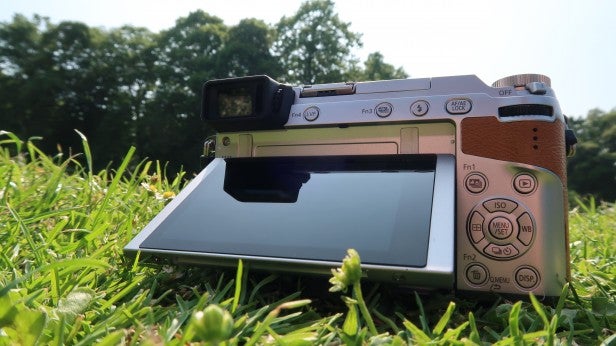 As standard, the GX80 comes with a 12-32mm kit lens. Although this is a reasonably short focal length, it makes for a decent walkaround lens – its biggest appeal is its small size. The lens collapses in on itself, making the overall size of the camera when not in use very small.

That said, if you’re in any way serious about your photography, it’s likely that you’ll want to invest in other lenses. The good news is that there’s a huge range available, certainly more than other compact system cameras out there. Since Panasonic shares the Micro Four Thirds format with Olympus, lenses between the two brands are interchangeable.