What is the Overclockers Infin8 Toxicity?

The Infin8 Toxicity, from Staffordshire-based PC builder Overclockers, is a monster. It’s the kind of extreme gaming system that will blister through the latest titles, but clearly it isn’t just meant to push pixels. This is a machine for showing off – as its huge case and striking water-cooled design indicates.

The Toxicity’s name comes from the striking green and black colour scheme that courses through every component.

The Phanteks Enthoo Primo case is black and bold on the outside – it’s made from aluminium and is decorated with sharp lines and smart panels – and a huge window on one side allows flashes of green to shine through. The metal that holds the storage cages, the shroud that hides the PSU and its cables, and the motherboard tray are all brightly coloured.

The black and green chassis makes a great base for building, and Overclockers has crammed the Primo with high-end water-cooling hardware. The middle of the case is dominated by a cylindrical EKWB X3 250 reservoir filled with green coolant from specialist brand Mayhems. A coolant tube runs from the bottom of the reservoir into the green shroud, and emerges beneath the pair of graphics cards. 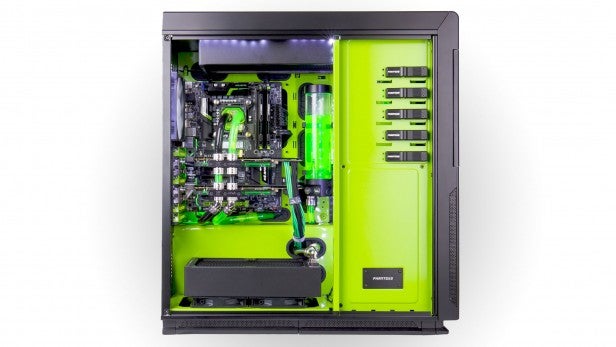 The tubes that sit between the main components are smartly coloured in green and black, and the colours are further shown off by the blocks that keep the processor and graphics cards cool. The GPUs are chilled by EK waterblocks that are black on top and green beneath, and the CPU block is transparent and bubbles with green liquid.

The theme carries through to the little details, too. The Gigabyte motherboard has black and green heatsinks, and the cable-routing holes on the green motherboard tray are made from black rubber. The cables that provide power to the graphics cards are individually braided in black and green, and the whole cooling system is powered by two black EK-CoolStream XE radiators – a 360mm model in the roof, and a 240mm unit in the base.

The interior is illuminated with white lights in order to properly show off Overclockers’ incredible build. The system is bold and brilliant, and it’s impeccably assembled.

Bear in mind that a system this intricate does come with caveats. More noticeable of which is its size. The Phanteks case is 650mm tall and measures 600mm from front to back. It isn’t light, either – it tips the scales at 25kg.

The intricate build also means that upgrade room isn’t as generous as it would be on more simpler systems. There are plenty of free motherboard slots, but the GPUs and cooling pipes make access tricky – and the same can be said of the empty hard disk bays on the rear. However, the two free memory slots are easy to reach.

It should be said that with such a specification, I can’t imagine that many people will need much room to grow.

This stunning system comes with a benchmark-breaking specification. Overclockers has deployed two of Nvidia’s fastest GPUs, and the firm’s own technicians have tweaked the cores for extra speed. Each PC has been tweaked to the best of its ability, which means that no two Toxicity machines will have GPUs that run at exactly the same pace.

That’s a vast amount of graphical power, and it speaks to the Toxicity’s intentions. This machine will have enough oomph to play games at 4K, and it’s also going to have enough power to play games on VR headsets.

The GPUs aren’t the only components tweaked by Overclockers’ engineers. The Core i7-6700K processor has four Hyper-Threaded cores and ordinarily runs at 4GHz, but here it’s been overclocked to 4.7GHz. It’s bolstered by 16GB of 2,666MHz DDR4 memory. 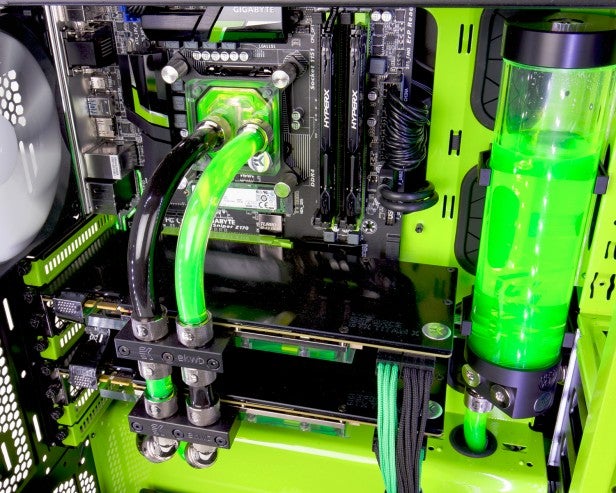 The storage is similarly impressive. The boot drive is a 512GB Samsung SM951 that uses PCI bandwidth, and there’s a 500GB Samsung 850 EVO drive. That’s not all – there’s a 3TB hard disk for vast games collections.

Every component connects to the green-tinged Gigabyte G1.Sniper Z170. It can handle 64GB of DDR4 memory, it has pairs of PCI Express x1 and PCI sockets, and features even more connectors than Overclockers has been able to use. In addition, it’s equipped with dedicated audio circuitry that lights up, and networking that can prioritise games traffic.

The Infin8 Toxicity’s backplate is well stocked. Its three USB 3 ports are bolstered by USB 3.1 Type-A and Type-C, and it has two more USB 2 ports, six audio jacks and a PS/2 connector – handy for legacy peripherals.

This board looks the part and ticks most of the boxes, which means it’s only missing certain enthusiast features such as on-board power and reset buttons and a diagnostic POST display. This isn’t a huge issue, however, since most people won’t be opening the case too often – and once inside it’s tricky to thread through the hardware to reach the board itself.