The Infin8 Toxicity system is designed for playing games on 4K panels, multi-monitor setups and VR headsets, so plenty of grunt is required. Thankfully, as games benchmarks demonstrate, this system is up to the task.

The toughest game I’ve run on the Toxicity is Crysis 3, and it proved no match for this machine’s pair of monster GPUs. At 4K, it eased to an average of 63fps – and that figure remained at a still-playable 36fps when I activated 8x anti-aliasing.

Performance is even better in other games. In Grand Theft Auto V at 4K, with every setting activated, the Infin8 Toxicity romped to an 82fps average, and it topped out at 97fps in Middle-earth: Shadow of Mordor at the same resolution. In Battlefield 4 and BioShock Infinite at 4K, it averaged 100fps and 101fps. 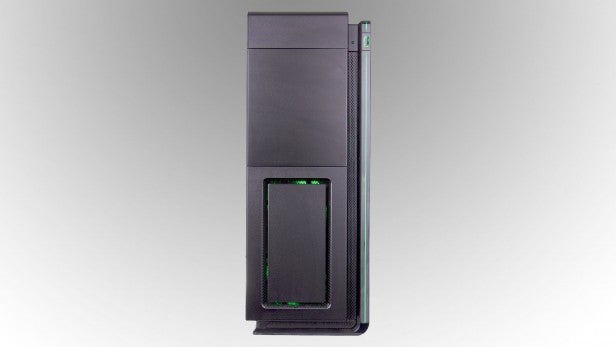 Those are stupendous scores, and they clearly indicate that the Overclockers won’t have any trouble playing any game smoothly at 4K. There’s room for more high-end gaming: this system won’t struggle with tougher graphical settings, GPU-intensive mods or multi-monitor setups.

Don’t worry about lesser resolutions, either. In the same games at 1440p, this machine averaged 124fps or better.

The Toxicity’s gaming prowess was underlined in synthetic tests. In the 3D Mark: Fire Strike test it scored 21,308. That’s a ludicrous result: the previous record-holder was the GTX 980M-powered MSI GT80, but that machine managed only 13,552 in the same run.

The overclocked processor here is no slouch. In Geekbench 3, the Toxicity scored 20,116. That’s another record-breaking result – the PC Specialist Octane is the next-best system, but it managed only 15,932 points. In Cinebench the PC Specialist scored 1,037cb, while an impressive system such as the Chillblast Fusion Fury Nano fell behind with 1,005cb.

In short, then, it’s impossible to deny this machine’s speed. It has enough application power to handle anything for work and play, short of specialist software that requires more than four cores, and it will run any game – whether it’s 4K, multi-monitor or VR.

That’s before I’ve even mentioned the storage. Samsung’s PCI-powered SM951 boot drive rattled through the sequential read and write tests at 1,782MB/sec and 1,194MB/sec – among the best scores I’ve seen from this popular drive. The 500GB EVO SSD delivered solid scores of around 500MB/sec when reading and writing, and even the hard disk read files at nearly 200MB/sec. 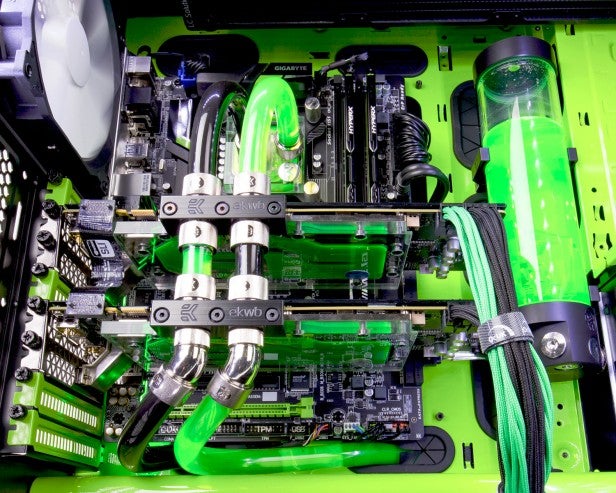 This system strikes a great balance between speed and size: the boot drive and secondary SSD have the speed for fast loading times, and the 3TB disk provides ample room for the busiest of Steam accounts.

The Toxicity’s stonking water-cooling kit made sure that the key components remained chilled, no matter the situation. The overclocked processor hit a peak temperature of 78 degrees, while the graphics cards topped out at 69 degrees. Both results are no cause for concern – although this machine’s peak power draw of 818W will certainly have an impact on electricity bills.

In terms of noise, this machine didn’t disappoint either. The Toxicity was barely audible when running less intensive applications, and during games the noise ramped up to a only a low hum. It’s more noticeable when the components are being stressed, but a set of headphones will adequately eliminate such sound.

There’s one prevailing question whenever a PC such as this appears on my test-bench: wouldn’t it be possible to build such a system for yourself?

The Toxicity is a huge, drool-inducing machine, which means that the build-your-own option comes with a few caveats. Few people will have the technical skill required to put together such an expert water-cooling system, and it will be tricky for ordinary folk to achieve the same level of overclocking from this machine.

Putting together a system yourself also means that there’s no overarching warranty, whereas Overclockers provides a three-year deal with the Toxicity that has two years of parts coverage and collect-and-return service.

Having said all the above however, it’s possible to attain similar performance levels to the Toxicity – and save a huge amount of money – with a more sedate-looking build.

I’ve priced up a machine using many of the same components. I had to change the motherboard, but opted for a high-end Asus gaming model, and I’ve chosen a pair of overclocked GTX 980 Ti cards from EVGA. I’ve also picked a Corsair water-cooling module for the i7-6700K processor.

My build has the same core components and the same brand of case, and the rig came in at £2,460. That’s still a huge chunk of cash, but it’s almost £1,000 less than the Overclockers machine. That saving could be put towards a monitor, keyboard and mouse; in fact, there would still be money left in the pot to splash out on a VR headset. 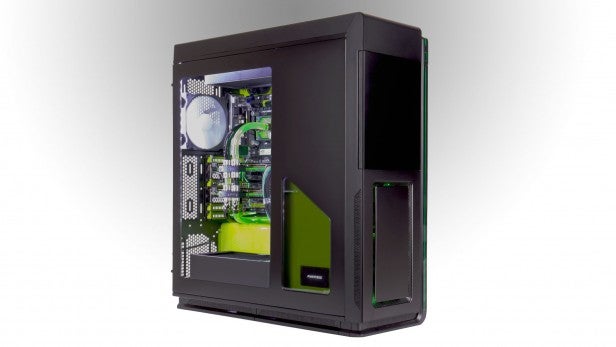 Should I buy the Overclockers Infin8 Toxicity?

Sure, it’s possible to attain such performance levels by building your own machine – but that’s somewhat missing the point of a machine such as the Infini8 Toxicity. This system is designed to power through any game, and to look good doing it.

And it nails that brief perfectly. The green and black colour scheme looks fantastic, and the whole system – from its overclocked components to the careful cabling – has been built with care. It delivers record-breaking speed: it’ll blister through any application and any game, whether it’s being played on a 4K panel, a multi-screen setup or a VR headset.

It’s possible to achieve similar performance levels for less cash by building a machine or buying a more sedate system, however. There’s no denying the extreme price of this machine – unless it’s for a suitably high-end gaming scenario, it’s overkill.

If that’s the goal, though, and a new PC needs to look good while brushing aside the latest games, then this machine is superb. The Overclockers Infin8 Toxicity is an extreme gamer’s dream.

If performance is your game, this is the rig for you.