What is the Octa Tablettail: Monkey Kit?

Tablets are great devices to use but the lack of a dock or stand often means you end up bodging ways to get them to sit just the way you want it to so you can watch a movie or read a book. Some cases let you stand your tablet upright but even then you need a reasonably flat surface – no good for a duvet or any other awkward base.

For £50 the Octa Tablettail: Monkey Kit aims to resolve all these issues by providing a versatile, but stable, stand for your tablet to rest on. 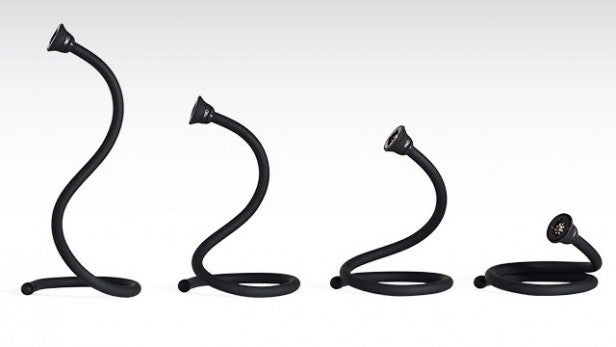 How does the Octa Tablettail: Monkey Kit work?

A heavy-duty suction cup, called the vacuum dock, grips the back of practically any smooth tablet. This then connects to a modular locking mechanism that can lock on to a number of bases, in this case the MonkeyTail.

It’s clear where Octa got the inspiration for the name. The tail flexes and bends just like a monkey’s would. It’s almost a meter long and soft touch black silicon covers the bendy metal beneath. It’s a weighty and solid piece of kit at 1.5kgs, which makes it a product for the home and the car, rather than for the commute.

Bending the MonkeyTail requires a satisfying amount of force, and once you get it into the right position it stays there. It does take a little while to get the knack, though. Band it in one direction and it’s very stable, bend it in the wrong direction and it quickly sags. We got to grips with it after a few tries and you know by how much force you’re applying as to whether you’ve got it right.

The vacuum dock worried us initially. Can we trust the Octa TabletTail to keep our expensive iPad upright and not just have it pop off and fall to the floor? After a couple of weeks of use we can safely say that yes we certainly can. The suction cup grips the tablet well enough, but a few quick presses of chunky button on the dock expels any residual air and creates a very solid vacuum seal. 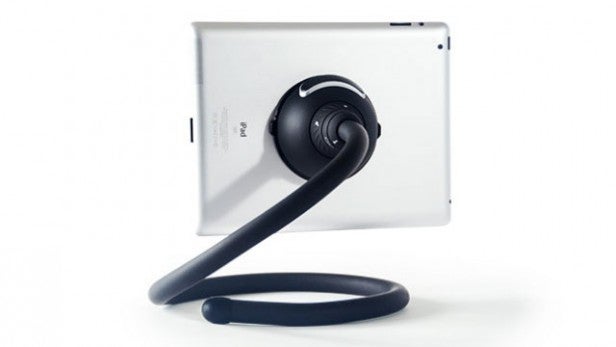 We tried hard to get our iPad Air, Nexus 7 and Kindle Fire HDX 8.9 to come off by pulling it but had to give up before we ended up snapping a tablet in half. Suffice to say the grip is excellent and you have to lift a small tab to break the seal – something that can’t be done accidentally.

One slight issue we did was that the MonkeyTail ‘rests’ a little when used with heavier tablets. While the iPad Air and other light tablets stayed where we wanted them to our heavier iPad 3 and Nokia Lumia 2520 sagged a little. It wasn’t too much of a problem once you get to know how it will come to rest, but it takes a little getting used to.

One of the best uses for the MonkeyTail is for using your tablet in bed. You can wrap the tail around a headboard and have your tablet float above or to the side of you. You can place half of it in the space between the mattress and bed frame to create a viewing platform for some lazy weekend watching of box-sets on Netflix or just wrap it round like Tigger’s tail so it can sit on a lumpy mattress. The fact that it lifts the tablet way above any case or cover does makes it feel like you’re holding the tablet and means you can have it much closer to your head as opposed to resting on a bedside cabinet.

The vacuum dock spins so you can easily switch from portrait to landscape or get the angle right so the tablet is at eye level. It works surprisingly well and we found the more we used it the more we found new applications for it. In particular we liked it as a stand for using the tablet as a monitor while typing with a Bluetooth keyboard. Because it lifts the tablet so much higher than usual there is less need to crane your neck – it’s more akin to using a desktop PC.

It also works great in the kitchen where you want your tablet off a potentially wet and sticky countertop, but also in the car where you can wrap it round a headrest to keep the wee nippers happy on a long drive. In a workshop, on a wheelchair, at the gym – there are hundreds of uses for the Octa MonkeyTail and we found the longer we had it for the more we used it. This isn’t one of those impulse buys that will sit in a drawer a week after purchase.

Should I buy the Octa Tablettail: Monkey Kit?

Before we actually used the Octa MonkeyTail we would have scoffed at the idea of it, but in use it is an extremely versatile and useful tool. It’s chunky and heavy, though, so don’t expect to take it with you everywhere. If you find yourself needing your hands for other things while you use your tablet then you’ll find it very useful indeed.