Nokia’s first foray into the cut-throat world of tablets comes in the form of the Lumia 2520 – a Windows RT 10.1-inch tab with an impressive spec list. Just like with the Microsoft Surface 2 a keyboard can be attached, but it’s not available yet so we’ll be evaluating the 2520 as a standard tablet and updating the review when the keyboard becomes available. It seems bizarre that Nokia has put the 2520 on sale without this option, but the fact it comes with built-in 4G for a similar price as standalone Surface 2 without it shows there’s more to the 2520 than a mere Surface 2 clone. 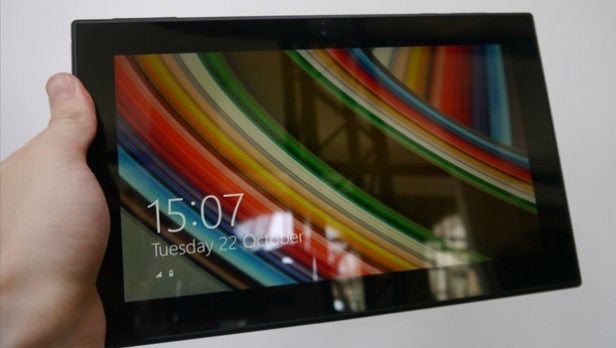 As soon as you pick up the Lumia 2520 it’s apparent Nokia has taken an old-school approach to the design – valuing features and connectivity over trimness and lightness. At 615g it’s quite a heavy tablet, far heavier than the recent iPad Air or Kindle Fire HDX 8.9, and is a fair amount larger too at 267mm x 168mm x 8.9mm, although it does offer more screen and a huge array of connection options – more on that later.

Not much effort has been made to keep the bezel thin either, there’s a very apparent black border all the way around the screen but the Lumia 2520 remains a pretty and fun looking tablet and the rounded, glossy plastic edges are comfortable to hold. It’s not very grippy, however, as you’ll struggle to keep it from slipping if you try to pop it up at an angle on a nightstand or desk.

The black plastic power and volume buttons sit together along the top edge when the Lumia is held in landscape. It’s not the best of placements as the buttons feel very similar, which means you invariably end up hitting the wrong one. Also along the top is a recessed combined microSD and SIM card slot. Unfortunately, it doesn’t sit as flush as it should to the frame and ruins the otherwise clean lines.

The back is sparse save for small Nokia and NFC logos and the Zeiss lens camera. There’s a surprising amount of flex and give to it, particularly in the middle. The lack of rigidity means that even a little applied pressure makes the Lumia 2520 creak ominously, and the screen to distort a little. This isn’t to say this is a badly made tablet, it’s just that it doesn’t feel quite as well put together as some of the competition.

So the Nokia Lumia 2520 doesn’t quite have the premium feel of the iPad or the grippy soft touch of the Nexus 7
or Kindle HDX range, but the bold glossy red and matt blue colours are
nevertheless stylishly appealing and it certainly doesn’t look cheap.
Black and white versions are also available, too, giving you more options than you do with most tablets. 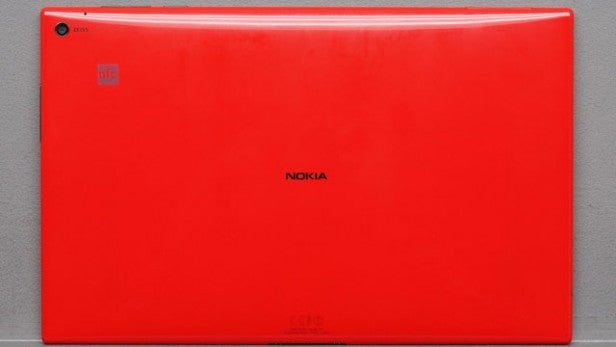 There’s a concerning amount of give to the plastic back

The 10.1-inch screen’s full-HD resolution is perfectly adequate. Yes, it’s lower-res than the iPad Air and Kindle HDX 8.9 but text is sharp, colours vivid and you won’t be disappointed with the 218 ppi (pixels per inch) unless you like reading tiny text.

It’s a proper fingerprint magnet and is also quite reflective, but it’s an impressively bright screen. At 650 nits, it’s a lot brighter than the Air or the Surface 2. The extra brightness comes at the expense of uniformity, however. At full power there is a little light-bleed from the left hand edge of the tablet and blacks can look a little grey. Colour accuracy also suffers as, while rich, there’s an unnatural yellowish hue.

Some people may prefer a warmer tone, but we like the more accurate colours on the iPad Air and Kindle HDX 8.9. That’s not to say the Lumia has a bad display, it’s actually very good, but there are better around. 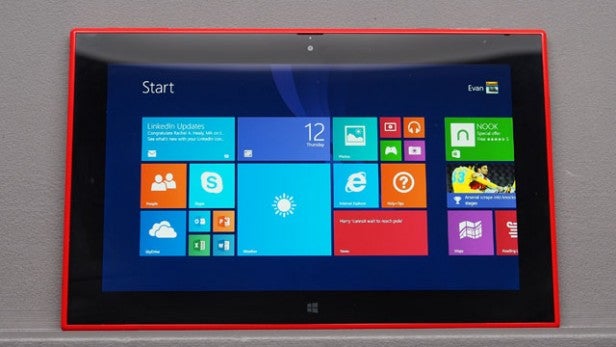 Nokia has managed to pack an impressive set of stereo speakers into the Lumia 2520. Two discreet cuts at the bottom of where the screen bezel and the body meet hide them, which means the Lumia is one of the few tablets with front facing speakers. This allows sound to be directed towards you, rather than away.

Top volume is plenty loud, although stereo separation is not very apparent and there’s a harsh, trebly tone at louder levels making dialogue higher pitched than it should be. Nonetheless, we enjoyed watching several movies on it and the high volume meant that we could hear even in a noisy kitchen, something the iPad Air fails to deliver, even though the sound is more accurate.