Travis Strikes Again: No More Heroes is a flawed experience, yet boasts such as a commendable level of creativity amidst its restrictions that I was unusually smitten with it.

From the second it begins, you can tell that Travis Strikes Again: No More Heroes has been developed on a small budget. A series often associated with bloody, overzealous action and absurd characters has been scaled down to a relatively intimate affair. Acclaimed director Suda51, who returns to the series for the first time since the original, is perfectly aware of this, too.

Dialogue pokes fun at the relatively sparse stages and minimal aesthetic, a quick dash of wit that fails to detract from what is often a tiresomely cumbersome experience. Despite this, Travis Strikes Again possesses an inevitable charm that carries it, complimented by a stark variety of styles with which it isn’t afraid to experiment. 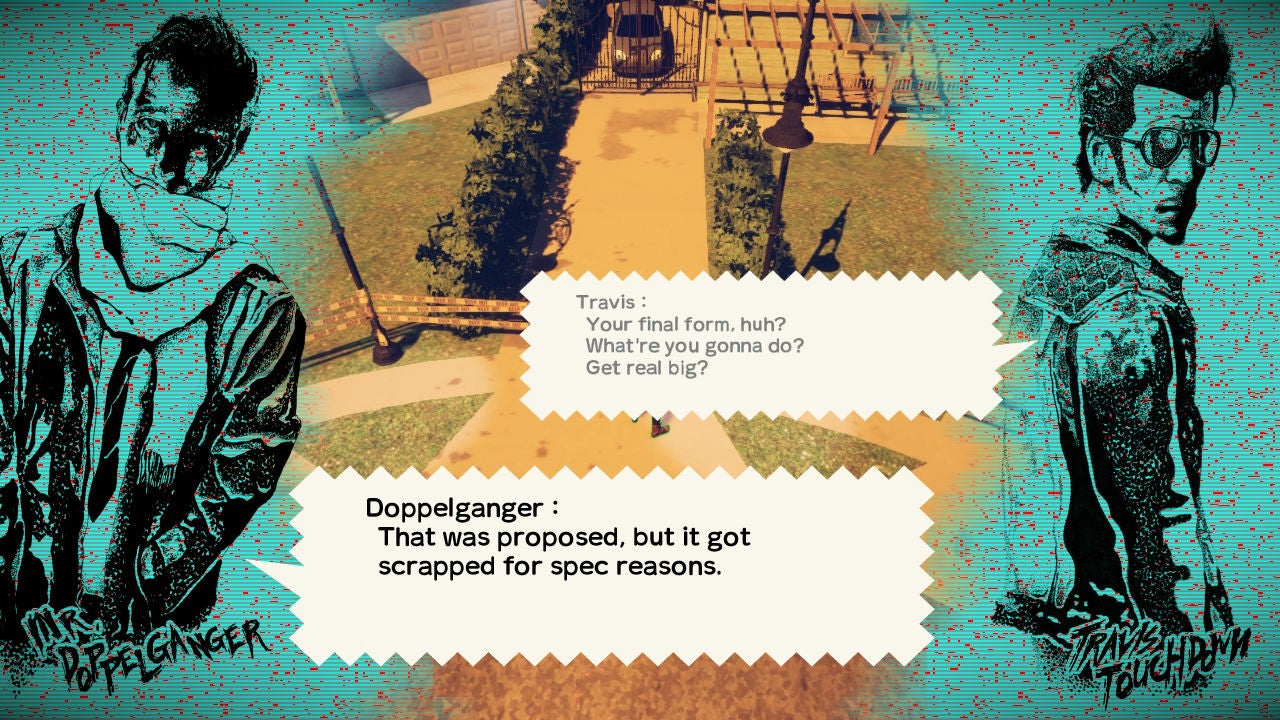 World renown assassin Travis Touchdown returns in his latest adventure, and the premise couldn’t be more simple. Bad Man, the father of a girl you previously killed, has tracked you down and swears revenge.

Seconds before our hero’s head is turned into bolognese by a baseball bat, you’re sucked into a mysterious games console known as the Death Drive MK-II. More haunted than the Ouya, this obscure hardware is the main attraction of Travis Strikes Again.

More specifically, Travis Touchdown and Bad Man have been enraptured by the Death Drive, and the only means of escape comes from beating all six stages and discovering the truth behind this discontinued nightmare.

So, off you embark on an inconsistent journey of hack ‘n’ slash combat and creative puzzle design, which really takes advantage of Suda51’s infamously beloved approach to atmosphere. 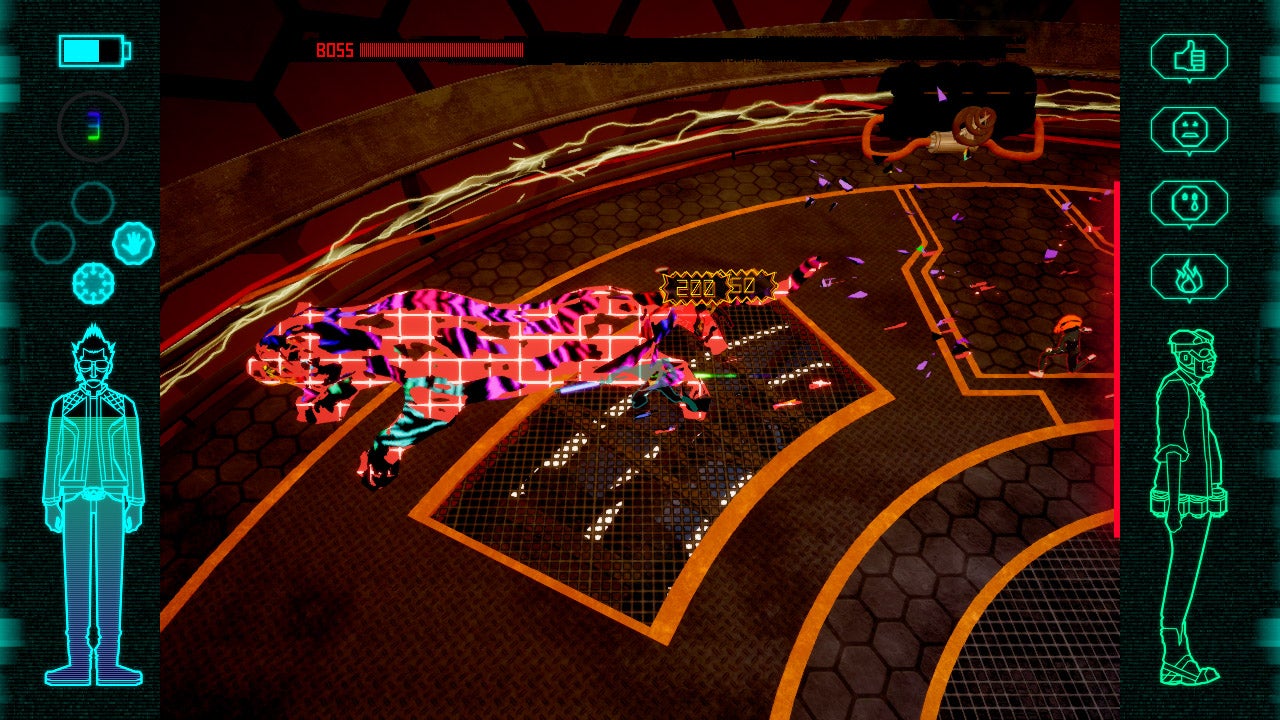 Every stage is inspired by archaic gaming and cinema tropes, with visual touches that ape the unusual era of hardware you’ve been sucked into. One stage opens with a delightfully cheesy live-action cutscene, where a serial killer murders an unsuspecting victim.

It’s unabashedly stupid, setting an unpredictable precedent of tone that Travis Strikes Again is happy to subvert at a moment’s notice. This makes every stage an unusual delight, constantly spouting dialogue that pokes fun at Grasshopper Manufacture’s dedication to growing this tongue-in-cheek universe despite an obvious lack of resources.

Part of me loved every second of Travis Touchdown cracking wise in the face of mortal danger, especially when at heart he’s still nothing more than a giant nerd who happened to purchase a lightsaber off eBay. The entire premise of No More Heroes is ridiculous, and the six stages (and other secrets I wouldn’t spoil here) you stumble across lean into this identity to the severest of degrees.

So it’s a shame that, for the most part, the central gameplay mechanics of Travis Strikes Again feel woefully undercooked. While you’re technically playing six unique games, otherwise known as “Death Balls,” they boil down to pedestrian slasher affairs that seldom attempt anything I haven’t seen before. In fact, it’s borderline mediocre at the worst of times. 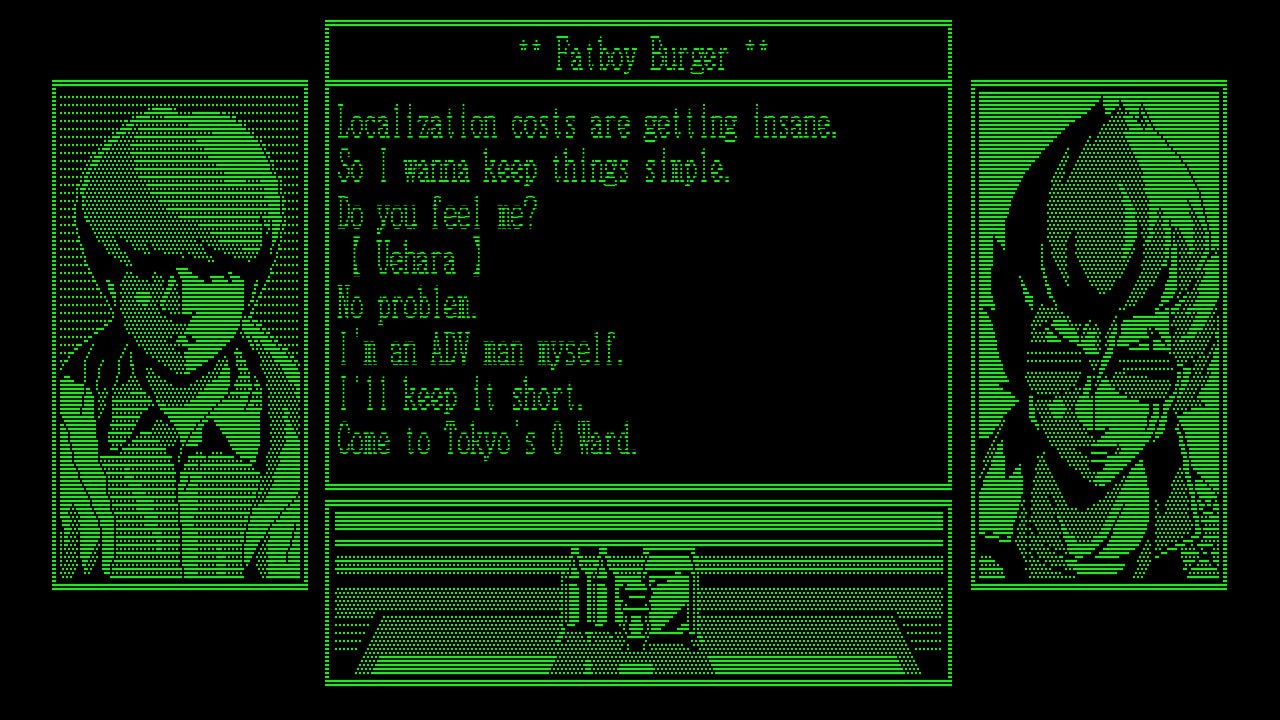 Travis Touchdown can perform both light and heavy attacks, although these can’t really be chained into combos of the type you’d expect from a genre renown for such epic confrontations. Instead, you’re powerless to do anything but spam the same attacks until the enemies around you eventually disappear.

At least light attacks can be specially applied as you sprint through foes, waving your weapon around like an electric nunchuk. After a certain amount of time, you can unleash a special attack with three stages, the last of which requires you to lightly wiggle the Joy-Con to deal massive damage. While simplistic, it remains somewhat satisfying throughout, although isn’t robust enough to justify a second playthrough.

Outside of swinging your laser sword around, Travis has access to a variety of skills he collects throughout each stage. These add a welcome dynamic to combat, allowing you to blast enemies into walls or slow down time within a certain area to get the drop on armoured foes without issue.

There’s enough of these to be discovered that I didn’t grow tired of experimenting with my loadout. However, the game’s inconsistent difficulty prevented things from ever feeling truly rewarding.

For example, the first stage’s boss had me close to throwing the controller out of frustration, and yet I breezed through the next few on my first attempt. Perhaps I spent too long grinding, but it never felt like my skills were being put to the test. 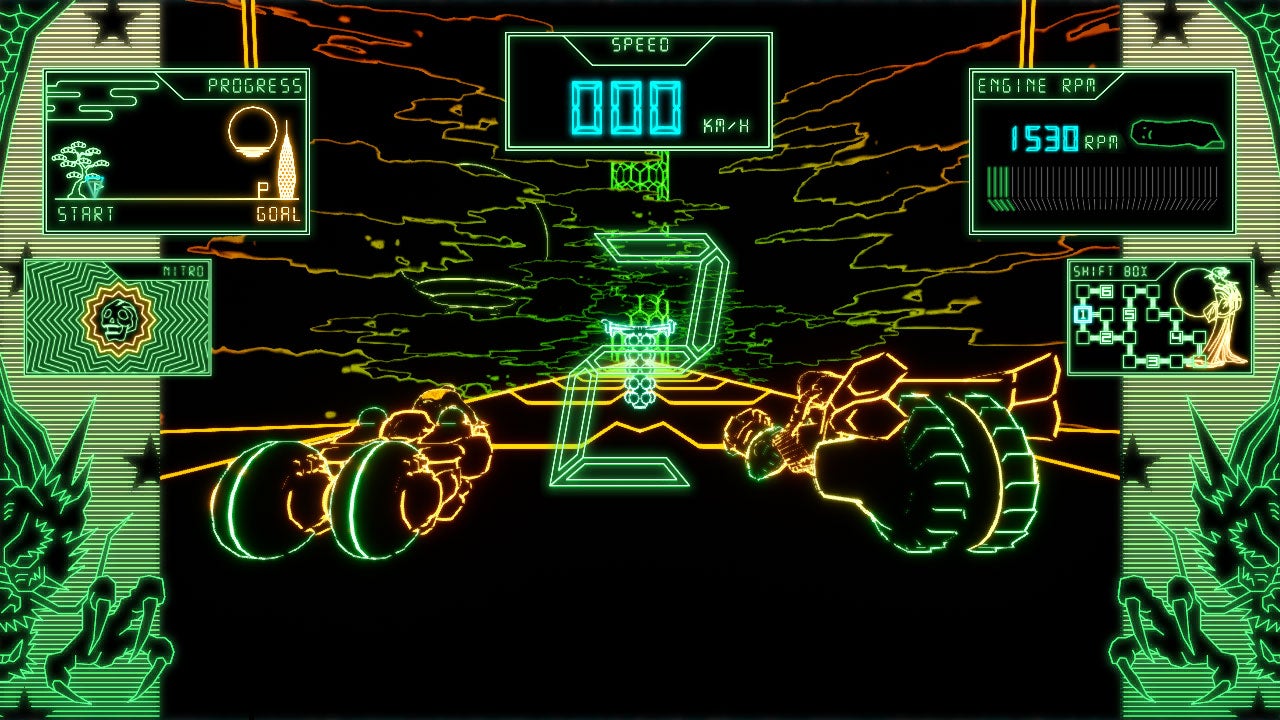 The finest moments of Travis Strikes Again don’t come from the average combat, but instead from sections that take place outside of the haunted game console. Before Travis can enter the six mysterious games, he must obtain the Death Balls containing them. This leads him on a pilgrimage across the country between each level, meeting a variety of unusual characters in a retro visual novel.

Playing out like a PC adventure title from several decades ago, Travis and friends are depicted in a bright green hue as they dart between bespoke locations, bumping into personalities that evoke the series’ history and deliver some truly biting dialogue. Some might consider the sense of humour a bit juvenile, but it’s clever enough to elicit more than a few laughs.

Jeane, Travis’s talking cat, is a personal highlight. Having an adorable kitty throwing out swears and threatening to tear out a random dude’s throat is so outside the box it’s undeniably hilarious. I’m also totally on board with Travis describing things as “anime bullshit,” fully acknowledging how nonsensical the world of No More Heroes has become.

It also acts as a perfect case study of Suda51’s creative flair in the face of adversity. Travis Strikes Again’s seemingly low budget leads the series to lean into its most bewildering elements to create something unmistakably genuine. It sparks hopes in my mind that one day we might see No More Heroes 3 realised to its full potential – and that’s an exciting thought. 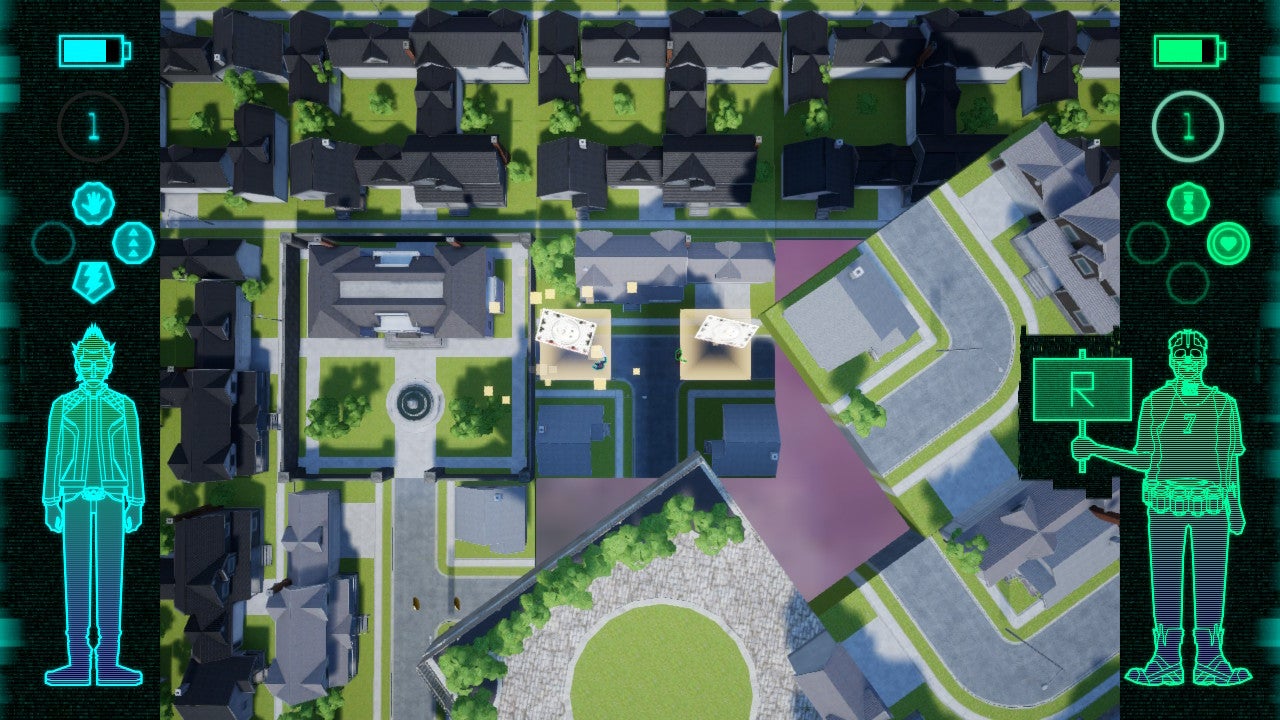 Aside from saving on the toilet, buying ramen and purchasing unlockable t-shirts emblazoned with obscure references and Devolver Digital titles, Travis Strikes Again does try its best to jump out of its comfort zone when possible. One stage sees Travis stumble across a virtual reality headset and competing in a Tron-esque racer on his motorcycle. It’s a functional distraction from the combat I wasn’t entirely fond of, and looks pretty rad in its own right.

If you don’t mind playing with a single controller, you and a friend can grab a Joy-Con each and participate in co-operative play as Travis Touchdown and Badman. Controls are simplistic enough that playing in this way is trivial, although things do get a little chaotic with two players taking out enemies together. Both characters can be levelled up individually, giving you a choice over who to prioritise throughout the campaign.

Travis Strikes Again: No More Heroes is a flawed experience, yet boasts such as a commendable level of creativity amidst its restrictions that I was unusually smitten with it. The combat is repetitive, the visuals are sub-par and, sadly, there isn’t a lot of depth to many of its mechanics.

However, the razor-sharp writing and sheer dedication to its universe allow Suda51 and Grasshopper Manufacture to craft one of Nintendo Switch’s most unique titles yet. I’m not sure I could wholeheartedly recommend it to the average player, but hardcore fans should certainly sign up.